This website requires certain cookies to work and uses other cookies to help you have the best experience. By visiting this website, certain cookies have already been set, which you may delete and block. By closing this message or continuing to use our site, you agree to the use of cookies. Visit our updated privacy and cookie policy to learn more.
Home » The Future of San Francisco's Transbay District
Architecture NewsCommentary & CriticismMultifamily Housing ArchitectureTall Building Projects

Studio Gang’s new residential tower in San Francisco, Mira, is a crisp shaft of white metal bays stacked 39 stories high, each floor twisted in a slightly different direction from the one above or below. The rippling pattern repeats itself every 10 floors, and from afar looks like a tightly wound corkscrew with a blunt top.

The architecture not only exudes confidence, it showcases the fast-growing Transbay district around it—21 blocks cradled against the city’s Embarcadero waterfront and the traditional financial district, a dense neighborhood with high-rise housing and offices framing a futuristic transit station that includes a 5.4-acre rooftop park. 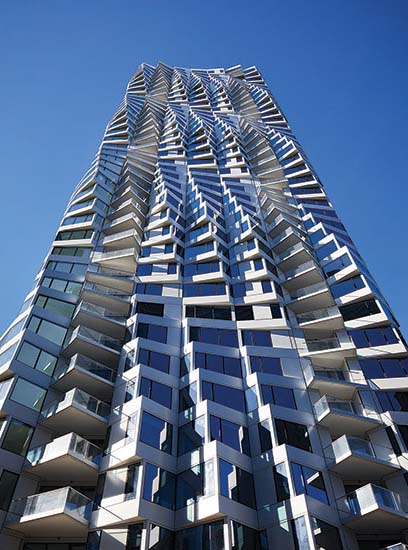 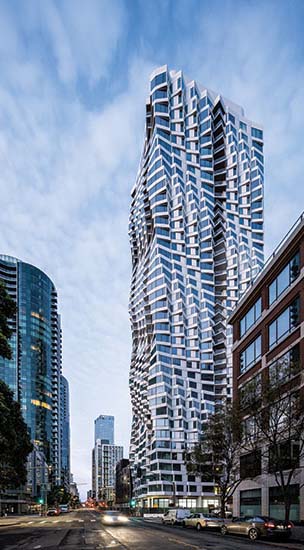 Studio Gang’s twisting new 39-story Mira residential tower has a built-in hedge against the city’s notorious high cost of living, with more than 30 percent of its condominiums designated affordable based on income. Photos © Jason O’Rear, click to enlarge.

Before the coronavirus took hold last spring, Transbay’s momentum seemed unstoppable. Now, in the persistent wake of the pandemic, the fragility of a plan approved in 2012 is more apparent by the month.

While such concerns play out in urban centers across the nation, it’s especially stark in a city with so many tech companies that increasingly are comfortable with employees’ working from home. Facebook, which fills the office space in two of the newest Transbay high-rises, has said it will let employees work remotely at least until next summer. That’s also the case with software firm Salesforce, the anchor tenant of the 1,070-foot-tall Pelli Clarke Pelli tower that replaced the Transamerica Pyramid as the peak of San Francisco’s skyline. Pinterest, meanwhile, paid $89.5 million in late August to cancel its lease on an unbuilt tower nearby. 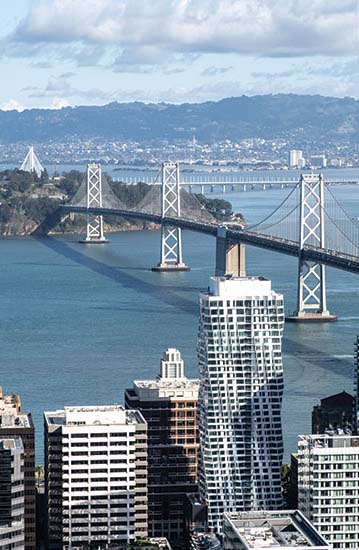 But you don’t need to read the business pages to get a sense of the pall cast by the pandemic. Ground-floor retail spaces in Mira and other new towers are largely vacant, as are once-active storefronts in the district’s older buildings. On the block to Mira’s north, two dozen ramshackle tents line one sidewalk.

San Francisco, which has long had the highest housing prices of any large American city, is no stranger to homelessness. The difference now? The homeless can be almost the only people on downtown streets otherwise usually filled with workers, shoppers, and conventioneers.

“The whole idea of a downtown depends on lots of people being there,” said Ray Gastil, who leads the Remaking Cities Institute at Carnegie Mellon University. “Center cities like San Francisco and Seattle are going to struggle with downtowns having this strange empty quality.” Yet Gastil recalls the doomsday scenarios that hung over New York after 9/11. “You can make short-term predictions that are way off,” he says. 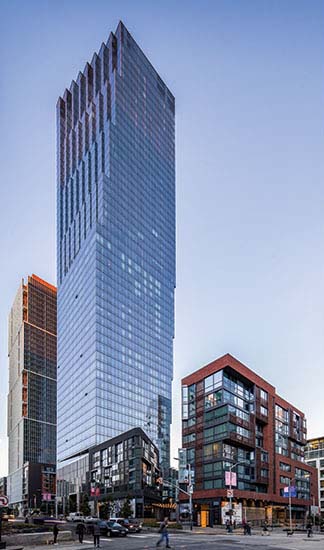 The Avery, a 55-story glass skyscraper by OMA opened last year, with a low-rise component by Fougeron Architecture. More than 25 percent of its units are aimed at those making no more than 50 per cent of the area’s median income. Photos © Jason O’Rear

What may help Transbay succeed long-term is the diversity baked into the plan. The city requires that 30 percent of the 4,400 housing units planned here must be subsidized for lower-income residents, including supportive housing for the formerly homeless. At Mira, 155 of the 392 condominiums are reserved for buyers who make between 80 percent and 120 percent of the area’s median income (the lowest price would be $231,000 for a one-bedroom). Similarly, the New York office of OMA designed the Avery tower that opened in the neighborhood last year—55 stories of stylishly understated serrated glass, with a low brick-clad wing designed by San Francisco’s Fougeron Architecture. While market-rate condos begin at $1.8 million, 150 of the 548 units overall are apartments for households making no more than 50 percent of the median income.

That’s still not cheap by national standards. But it means that when you walk through the transit center’s lush rooftop park, you see families who reflect the neighborhood’s economic and racial diversity.

Mira architect Jeanne Gang is confident that Transbay and its surroundings will regain the vitality for which San Francisco is known. “Months are nothing in relation to the life of a building or a city,” Gang said earlier this summer. “We like cities for a reason. They’re where exchanges can happen, social as well as economic.”