With the opening of this building in the lakeside Swiss city of Lausanne, Plateforme 10, a $262 million purpose-built museum district, is now complete. Located on disused railroad land, next to the city’s main station, it provides new homes for three institutions: the Musée Cantonal des Beaux-Arts (fine-arts museum, or MCBA), the Musée Cantonal de Design et d’Arts Appliqués Contemporains (contemporary design and decorative-arts museum, or MuDAC), and Photo Élysée (photography museum). While the MCBA moved into premises by Barcelona-based architects Barozzi Veiga two years ago, MuDAC and Photo Élysée took possession of a shared $107 million, 155,000-square-foot building by Lisbon-based office Aires Mateus in June. Master-planned by Barozzi Veiga, the district takes the form of a long, narrow esplanade bounded on one side by the MCBA, along the tracks, and on the other by an arched retaining wall topped by apartment buildings, with the esplanade closed at its head by the Aires Mateus building (at the opposite end from the station). The new museum building sits beside an arched retaining wall that is topped by apartment blocks. Photo © Matthieu gafsou, click to enlarge.

“The site determined the project from the beginning,” says Manuel de Aires Mateus, whose firm, founded in 1988 with his younger brother Francisco, beat the likes of Jean Nouvel, SANAA, and Valerio Olgiati in the 2015 competition. “The center of the museum district is the esplanade, which we felt should be prolonged inside our building to create a common entrance hall for the two museums.” But how would one ensure equal treatment of each institution on a restricted site? “Display conditions decided that,” he continues. “Chantal Prod’hom, director of MuDAC, was keen to have abundant natural light—to exhibit stained glass, for example. At Photo Élysée, on the other hand, you need to protect the works from too much light.” MuDAC’s galleries are therefore located upstairs, in the form of a single 17,000-square-foot space daylit from above, while the 16,300-square-foot Photo Élysée exhibition hall sits below the entrance foyer, receiving natural light via just two sunken patios and a large sunken garden (all three light sources alleviate the sensation of being in a basement, while the garden offers programmable outdoor space). “To summarize crudely,” says Nathalie Herschdorfer, Photo Élysée’s director, “you have the classic white cube upstairs and a black box, like a camera chamber, down below.” An L-shaped service structure, with integrated stairs that connect the esplanade, wraps around the cube (1 & 2). Photos © Matthieu Gafsou

But context also shaped other aspects of the project. “We wanted to keep our building compact,” says Aires Mateus, “because you already had the long, imposing wall of the MCBA. That’s enough. We therefore brought the cube, as we call the public part of our building, closer to the ground: it rises only as high as the second floor of the apartment blocks on the embankment, so it doesn’t spoil their views. And we used the site’s topography to anchor all the rest.” Storage for the two museums is housed in a vast lower basement that occupies the entire plot, while administrative offices and workshops for framing, restoration, and temporary construction are in an L-shaped service structure that hugs the embankment and wraps around two sides of the cube. As a result, it’s hard to believe that Aires Mateus’s project is 21,000 square feet bigger than the very monumental MCBA. This arrangement also allowed the firm to fulfill their urban obligations: stairs integrated into the service building, as well as a cycle ramp at the rear, link the esplanade—which otherwise would be a claustrophobic cul-de-sac—to the neighborhood above, while the service building’s roofs carry a public garden that enjoys splendid views across Lake Geneva toward the mighty Alps. The final part of the program, a restaurant on the esplanade, once again hugs the embankment, its elevation cadenced with arched openings that mirror those of the retaining wall. The exhibition areas of Photo Élysée are in the building’s basement. Photo © Catherine Leutenegger

But the project’s raison d’être is, of course, the cube, whose pristine white concrete is set off against the darker gray of the embankment structures. Here, Aires Mateus piled up the paradoxes in pursuit of a certain bravura: on the one hand, this monumental mass of concrete— 144 feet square and 50 feet high—seeks not only to appear unintimidating but also to levitate, while on the other it veils the complex truth of its construction behind deceptive material simplicity. A zigzagging gash in the cube, the foyer is treated like a geological fault separating the two museums. “We didn’t want visible supports,” continues Aires Mateus. “We wanted these two museums to be separated by a void.” This is why the MuDAC is held up by just three concrete cores (containing elevators and fire escapes) that carry 44 steel trusses, each 140 feet long. These are dissimulated behind irregular concrete vaulting that plays both a structural and a visual role: as well as helping to distribute loads, it descends toward the three cores, just as the floor rises around them, in an attempt to make you forget the supports are there. But the cores are so big and, in places, the ceiling so low (I could touch it with my hand) that you feel trapped in a claustrophobic cave rather than released into a soaring void—a sensation not helped by all the necessary clutter that fills the space: furnishings for the bookshop, café, and ticket desk, or the lighting tripods with fire-exit signs tacked onto them because the architects refused to fix anything to their ceiling. As you proceed to the middle of the foyer, a concrete stair rises on your left to the MuDAC, while another descends on your right to Photo Élysée. With its white walls and gridded opaline-glass ceiling, lit from above via a sawtooth roof glazed on the vertical to the north (with solar panels on the south-facing slopes), MuDAC seeks a sensation of infinity. But, again, the illusion doesn’t quite work, and a certain oppressiveness prevails, in part because of the elevator/fire-escape shafts that obstruct views—if only they were outside!—and also due to the lack of windows. There’s just one triangular opening overlooking the tracks in a corner, and it exists only because Prod’hom pleaded for a window to help orient the visitor (she dreamed of a view over the Alps); unwilling to cut an opening in their pristine white box, the architects fiddled with the zigzag of the entrance foyer so it rose high enough to allow this concession. Downstairs, the darker volume of Photo Élysée suffers from a similar feeling of claustrophobia, which, too, is a result of the “freedom” that Aires Mateus sought to offer the curators with their trade-fair-style single-volume halls: for each new exhibition, display walls must be built, and the temptation to overstuff was evidently too great in both museums at the inaugural shows. This is a building that elegantly checks all the functional boxes, but only pulls the rabbit halfway out of the magic hat. 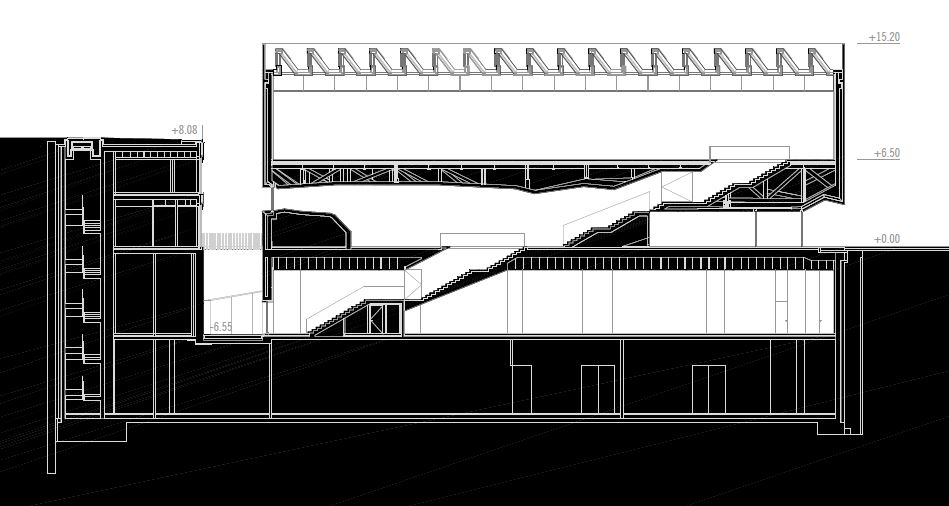 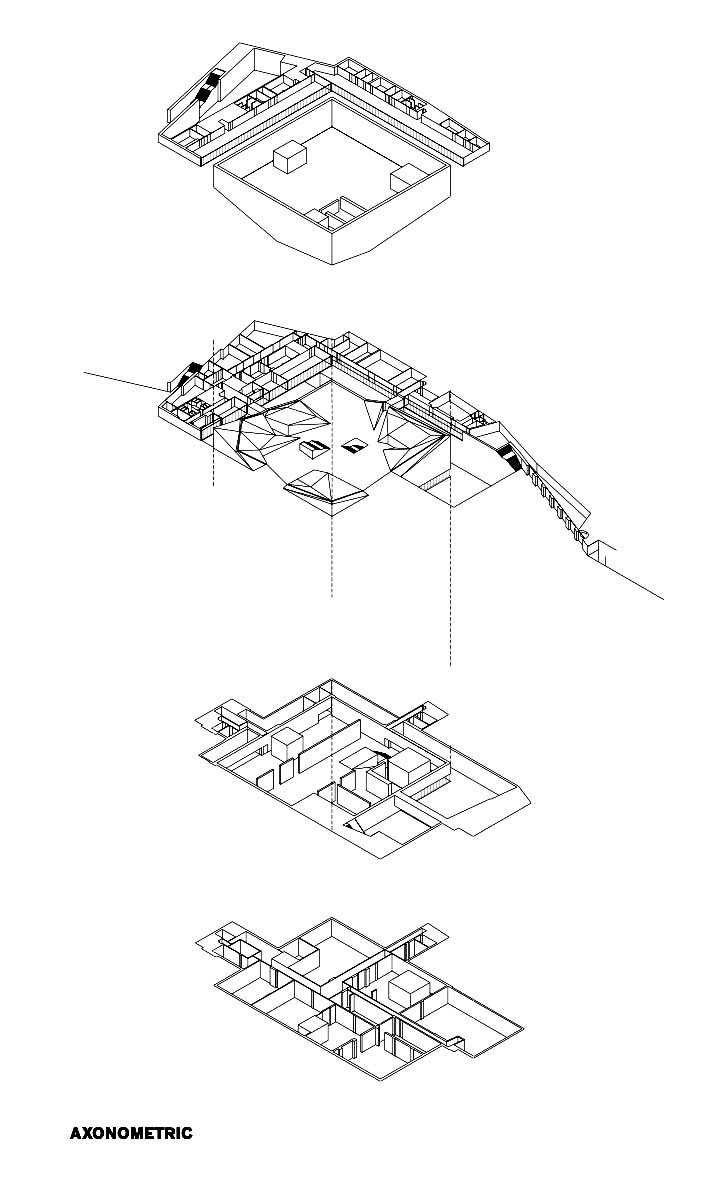