Perched high on a rocky spur, the granite-hewn old town of Porto-Vecchio—the cittadella, as it’s known locally—looks down at the mouth of the tiny River Stabiacciu, where it enters the Tyrrhenian Sea. Beneath the cittadella, more recent development sprawls loosely inland behind the 1980s marina and the now-abandoned 18th-century salt pans. Here and there among an unlovely jumble of houses, apartment blocks, parking lots, and supermarkets, pockets of greenery recall an agrarian past when the land around Porto-Vecchio was used to cultivate olive trees and cork oaks. It was on precisely one of these pockets that the municipality planned a 12,900-square-foot multimedia library and cultural center to replace an inadequate 2,500-square-foot facility in the old town. Baptized L’Animu (“spirit” or “breath” in Corsican), it is located next to a district of crumbling social-housing blocks—home to some 1,200 people, half of whom are under 20—thereby bringing cultural and educational services right where they’re needed, since only a tiny percentage of Porto-Vecchio’s 11,000 inhabitants today lives in the cittadella. The building appears to float on the site (top), its curves designed to circumvent the landscape’s cork oaks, olive trees, and granite boulders (above). Photo © Eugeni Pons, click to enlarge.

“When I visited the site, I thought it would be rather sad to see it disappear beneath a building,” says Dominique Coulon of Strasbourg-based Coulon & Associés, which won the 2016 design competition. “There were beautiful olive trees and cork oaks, as well as impressive granite boulders. So we proposed a structure that floats over the landscape.” Located on the higher side of the plot, L’Animu perches on pilotis over the receding ground, its irregular scalloped plan dictated by existing trees and boulders. “I was also thinking of Oscar Niemeyer’s Casa das Canoas in Rio de Janeiro,” continues Coulon, “where the house skirts ’round a giant boulder out front,” an architectural debt that is also manifest in L’Animu’s sensuous curves and generous glazing. Again à la Niemeyer, Coulon chose to build L’Animu in raw gray concrete, a technology Corsica handles well, he explains.

Roughly rectangular, the plot is bounded to the northwest by the main road into town; to the southwest by the social housing; to the southeast by a new school currently under construction; and to the northeast by a handsome stand of cork oaks. In part scooped out of L’Animu’s facade, a new pedestrian plaza in front of the social housing provides public access to the library, away from but within sight of the speeding traffic on the main road. L’Animu’s program is very similar to that of Coulon’s multimedia library at Pélissanne—reading rooms for adults and children; a space for meetings, exhibitions, and live events; staff offices and workshops; enclosed spaces for video games—but here, in response to the landscape and the freedom offered by a greenfield site, the interior is far more fluid and open. Apart from a small lower floor containing technical spaces, this is a one-story building with few internal walls: the entrance area, reading rooms, and exhibition space flow into each other, while offices and meeting rooms are tucked away in the southeastern wing, and gaming and computer booths tidied into a circular structure at the reading room’s center. Even more than at Pélissanne, the landscape is brought inside, thanks to abundant floor-to-ceiling glazing—three large expanses in the main space—while further daylight enters via circular roof lights. Coulon’s signature care for detailing is ubiquitous: furnishings are built in as much as possible, to avoid clutter; ceilings are remarkably clean, given all the technical apparatus they carry; glazing supports dissolve, thanks to mirror-polished steel; and, since the glazing is all fixed (winds can be very strong in Corsica), hand-operated metal openings allow natural ventilation. Surfaces are dressed in a rather marine livery of white (walls and ceilings), gray (polished-concrete floors, metal doors and openings, recessed shelving), and royal blue (carpet in the children’s space). Ample glazing and skylights illuminate the interior during the day (1 & 2). Photos © Eugeni Pons In response to a certain hostility of context, L’Animu is much rougher and tougher outside. Not only does the concrete bear all the marks of its making, it is studded and pocked with shards of granite and their impressions, a nod to the natural landscape, intended to catch the strong Corsican light. From the main space, an opaque metal door you might mistake for a fire exit opens up to reveal a surprise: a spiraling concrete ramp that winds down among the boulders into a garden that is intended both for reading in and for public events. The undercroft beneath the main reading room has been fitted out as a seating area with a bar (pleasantly cool on a torrid August day), while a small concrete amphitheater lends itself to more formal happenings. Coulon likens descending the ramp, with its perimeter walls that rise and fall to obscure and reveal views, to negotiating a Richard Serra sculpture; moreover, its 4 percent gradient makes it accessible, obviating the need for an elevator. The facade’s concrete is studded and pocked with shards of granite and their impressions (3 & 4). Photos © Eugeni Pons “Between September and June, 1,000 schoolchildren visited L’Animu, 2,000 people came to our workshops, and more than 1,700 inhabitants have taken out library cards,” declares Pierre Xavier Prietto, head of cultural programming in Porto-Vecchio. “That’s pretty good for a small town. We now have storage capacity for 20,000 documents, in comparison to just 7,000 before, and the ages-5-to-20 category is borrowed most—it’s the children who bring their parents here.” Breathing new spirit into a neglected neighborhood, L’Animu is a rebuke to careless development, conveying seriousness and civic sensibility with a benign lightness of touch. Outside, a bar and seating area, shaded by the main room above it, faces the garden. Photo © Eugeni Pons 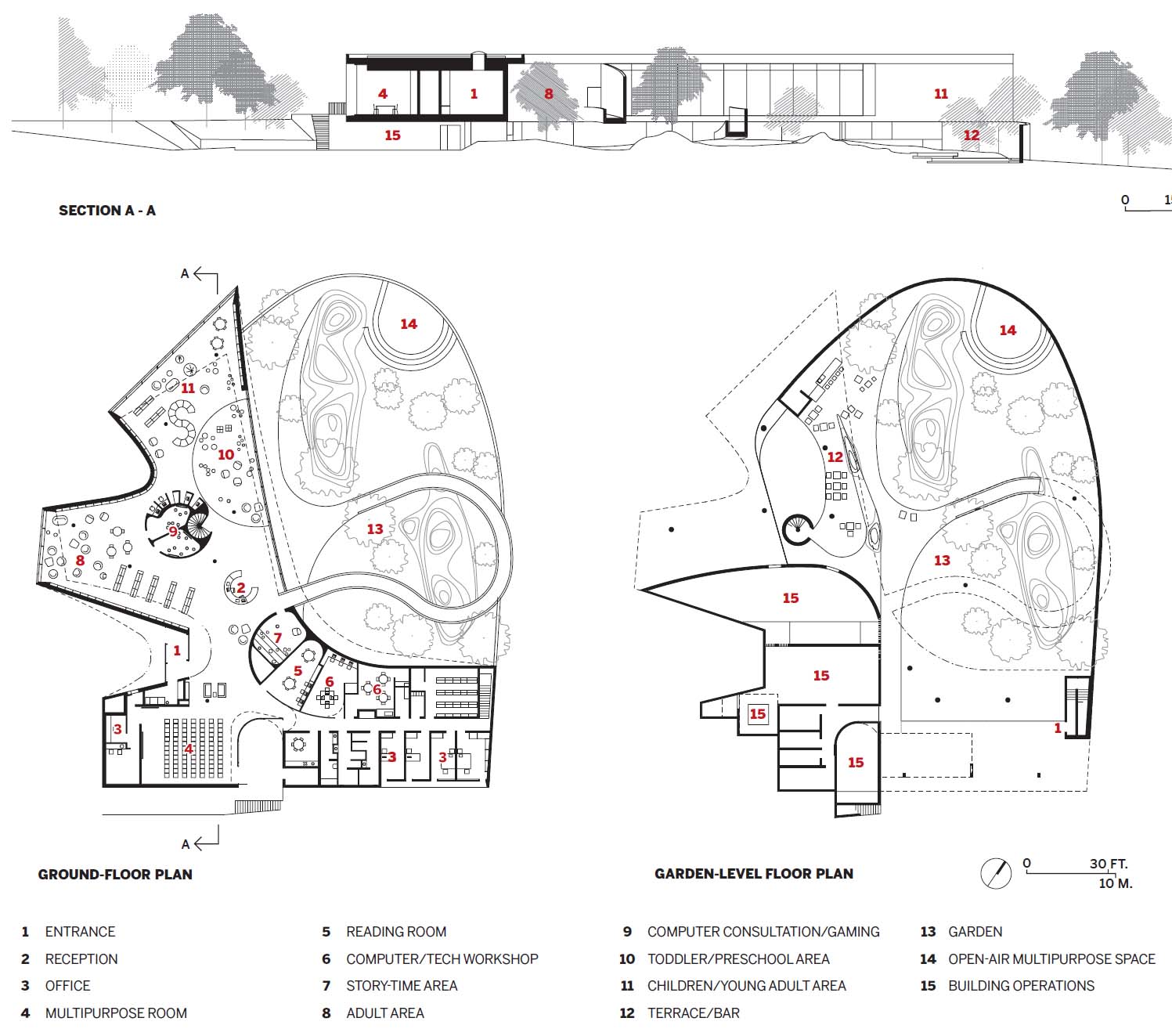