This website requires certain cookies to work and uses other cookies to help you have the best experience. By visiting this website, certain cookies have already been set, which you may delete and block. By closing this message or continuing to use our site, you agree to the use of cookies. Visit our updated privacy and cookie policy to learn more.
Home » Media Library and Park in Pélissanne by Dominique Coulon & Associés
ProjectsBuildings by TypeCivic Architecture

With its stately plane trees and dense medieval center surrounded by large 18th-century houses, known as bastides, Pélissanne is a picture-postcard Provençal village. When, in 2013, the municipality voted to construct a new library (the old one having become woefully inadequate for a population now numbering 10,000), they decided to locate it in one of these bastides, a handsome three-story edifice sited between the medieval center and the town hall. Built in the local blond stone, pierre de Rognes, the house came with a sizable garden that the municipality opened as a park when it first bought the property, in 2001. By far the largest in Pélissanne’s historic center, the park has become a much loved public facility, so local apprehension was palpable when it was announced that, in order to create a library of sufficient size, an extension to the bastide would have to be built on part of the garden. 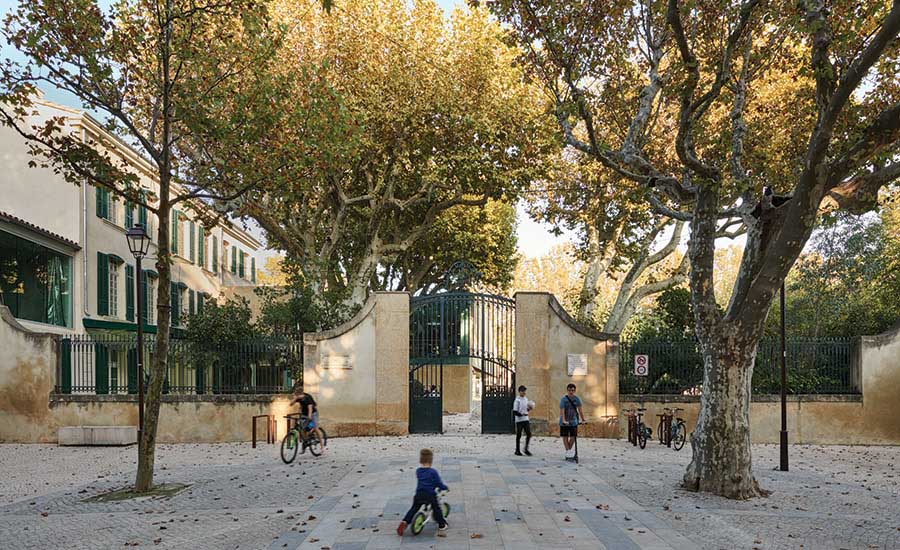 “What interested us in this project was the beautiful site,” says Strasbourg-based architect Dominique Coulon, whose office won the 2014 design competition. “I’m very attached to the relationship between landscape and architecture”—an attachment that won him the job, as his proposal was far more self-effacing than the others. “We wanted the old house to be as visible as possible,” he explains, “so we chose to site the extension next to the bastide, in front of the blind rear walls of neighboring houses.” Coulon’s sensitivity to the genius loci went further than that, however, since the relationship with the site drove the entire logic of his design. “Plane trees are sacred in Provence!” exclaims Nathalie Allemand, the library’s director, and it so happens that two magnificent specimens stand right in front of the bastide’s garden facade; Coulon’s extension scoops around one of them and establishes a direct relationship with it from inside. 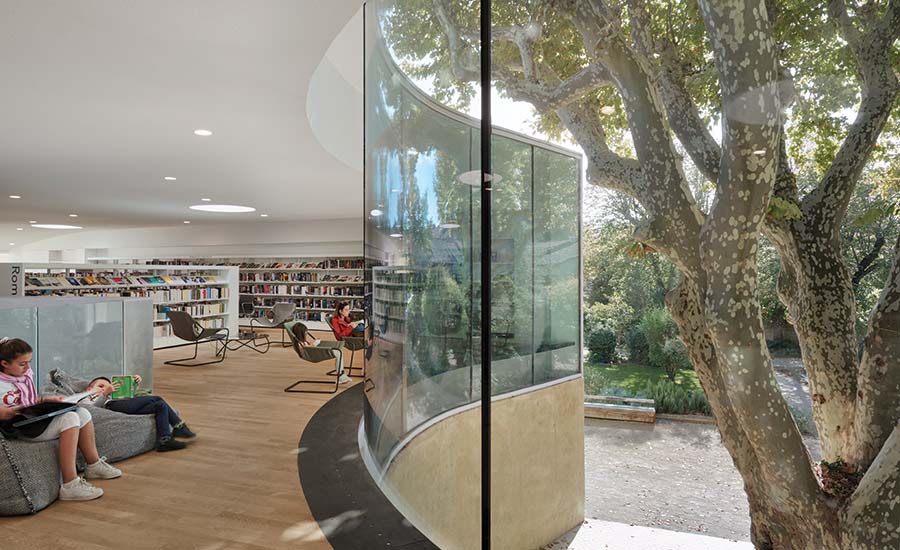 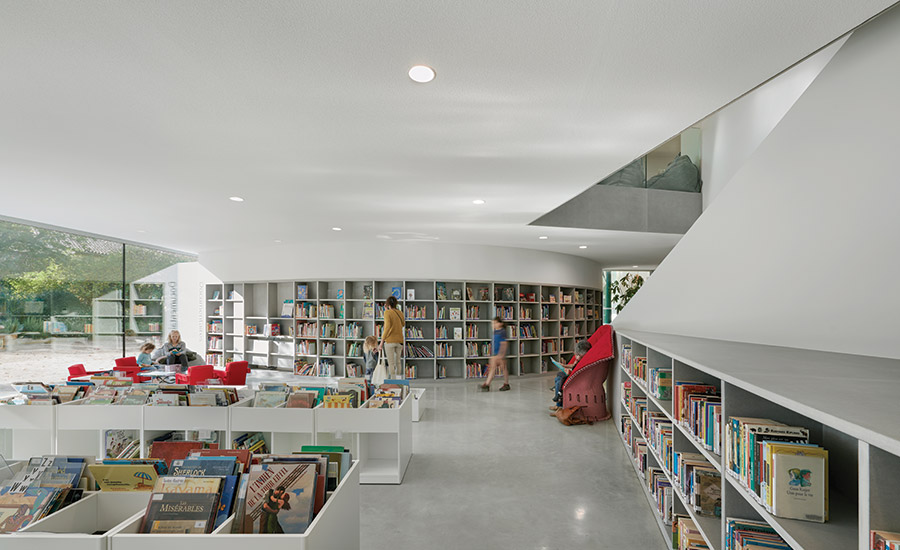 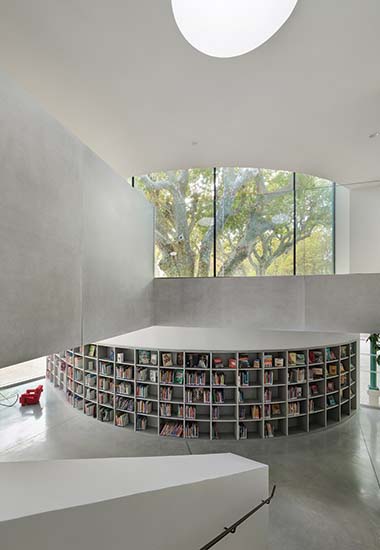 The building embraces a plane tree within a glazed scoop (1). Below, the curve supports bookshelves (2 & 3). Photos © Eugeni Pons

Sensitivity to the site also implied treating the bastide with respect, so Coulon insisted that visitors enter via the house’s original hallway. From the entry, you may either turn left into a new lecture hall (carved out of the bastide’s western extremity), ascend the house’s new main staircase diagonally opposite, or turn fully right to enter the extension. Choosing the latter option, you make your way into a long, south-facing space that is flooded with daylight by floor-to-ceiling glazing running down its entire length, thereby bringing the garden right inside. Here, opposite handsome bespoke shelving that curves around the plane-tree scoop, is a debonair single-flight stairway that, Coulon explains, “was not designed as an autonomous object but as an unfurling of space.” Climbing it to the extension’s second level, you discover the other big surprise (a revelation, even though you’d half clocked it outside): here the western rather than the southern facade is entirely glazed, a bravura realization in 15-foot-high, 2-inch-thick panes of curved glass that affords plunging views into the plane tree’s heart. Indeed the entire extension is a technical feat, since no intermediary supports interrupt the run of the downstairs glass wall, thanks to a 100-foot-long beam perched on the cast-concrete lateral walls, whose sand and aggregate were locally sourced in order to achieve a result resembling pierre de Rognes (with a naturalistic surface effect obtained using acid-etched polystyrene for the formwork’s inner surface). Taking its cues from the context, the extension slopes down toward the east, following the roofline of the neighboring houses, while to the west its structural audacity is highlighted by a knife-edge joint where the ground-floor and second-story glazing meet. 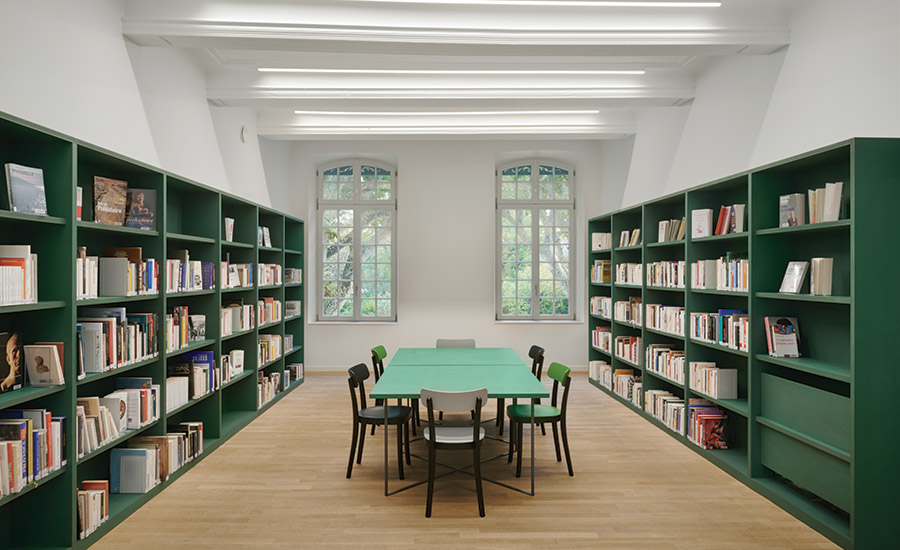 Equally impressive is the way such a rich variety of spaces has been packed into a relatively small building (10,500 square feet). Coulon wanted to touch the bastide as little as possible—a difficult task when its new function required stronger floors, wider staircases, elevators, geothermal heating/cooling, a new basement, etc.—and managed to leave its layout more or less intact. Certain original features, such as exposed beams, were preserved, including a ceiling medallion (which meant not reinforcing the floor above, leading him to suspend the upper story’s shelving from the wall). Color and materials contribute to the diversity—the bespoke furnishings by Coulon in shades of gray and green, the new bastide staircase in sheet steel with oak wainscoting, the children’s story corner in vivid red—in what is a total environment: Coulon chose all the furniture that he didn’t have made (chairs by Mendes da Rocha, Rietveld, and the Bouroullec brothers). The one exception is the standard-issue freestanding shelving, which he tolerated. The single major criticism is that such a high-design approach leaves no opportunity for interventions by the inhabitants, so when they do it anyway—the splashy Christmas painting and giant Post-it display on the ground-floor glazing the day I visited—the clash is startling, to say the least. 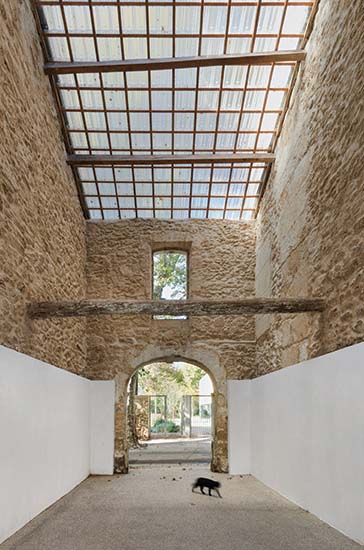 A passageway carved out of an adjacent house connects the library to a pedestrian axis (4). South-facing floor-to-ceiling glazing floods the interior with daylight and invites the garden inside (5). Photos © Eugeni Pons

“Since opening, we’ve doubled our attendance,” says Allemand. “People tell us the library is like a beautiful gift to the inhabitants of Pélissanne.” She particularly appreciates the southern glazing (situated alongside a pedestrian axis crossing the village, the municipality having asked Coulon to create a passageway out of a nearby house) for the relationship it establishes with the exterior. “Passersby see what’s happening inside, which takes away the intimidation they might feel faced with a grand entrance. As a result, they’re much more inclined to cross the threshold”—just one example of the benevolent civic-mindedness that permeates the entire project. 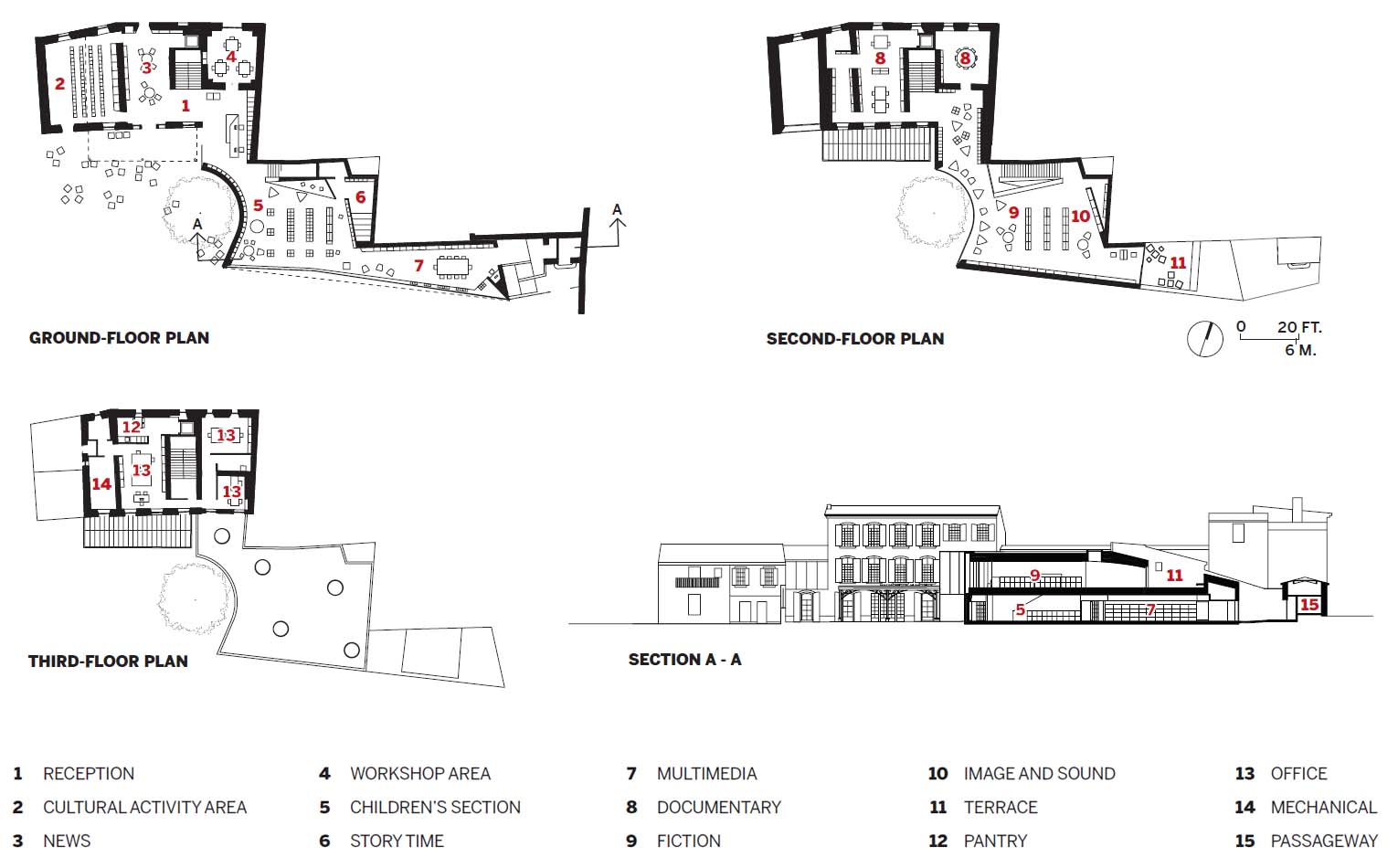