When London South Bank University (LSBU) opened its hulking centerpiece building in 1976, a long review in an architectural journal identified numerous shortcomings, but concluded on a positive note: “It is a building which could be loved.” That proved too optimistic. Neither students, faculty, nor neighbors developed much affection for its blank, unfriendly facades, its disorienting and claustrophobic interior, its “spartan” finishes and frigid climate. “People said it was like a prison,” says university librarian Alison Chojna.

Changing that perception was a central aim of a comprehensive renovation by WilkinsonEyre, which also set out to improve dismal energy performance and to better support current approaches to learning. Many of LSBU’s 21,000 students also have jobs and don’t mix much outside class, says Chojna, while others come from disadvantaged backgrounds and might lack confidence. “It was vital that the building should engender a sense of belonging—a home away from home.” Now known as the Hub, the 220,000-square-foot, four-story structure is unrecognizable. Inside, a warren of corridors and small, cellular offices has been swept away, replaced by light-filled social spaces and informal study areas, including a spectacular double-height library. Outside, the leaky James Stirling–inspired facades of red tile and angled glazing have been wrapped in a well-insulated new overcoat. A pair of stair towers clad in bronze and topped by glazed lanterns flank the enlarged entrance foyer. Its metal canopy projects over a newly created route into the campus. Photo © Edmund Sumner

Beige brick and big bronze windows lend a calm but suitably civic expression to the principal facade on busy London Road. On the other elevations, facing into LSBU’s dense campus, glass-fiber-reinforced concrete panels are molded into sail-like forms derived from the university’s emblem. The palette is shared with a proposed building by the same architect on a site immediately to the north.

To the south, where a triple-height internal street forms the building’s principal circulation spine, WilkinsonEyre has replaced underwhelmingly small entrance doors with a voluminous glass foyer. Its metal canopy projects over a new route into campus, created from a dingy service yard. For the first time, the way in is obvious and welcoming.

LSBU’s decision to remodel the deep-plan building rather than start over was governed by cost and practicality. The campus, located in the Elephant and Castle neighborhood, is tight, giving little room to maneuver, and, though close to the city center, the university is not wealthy. Sustainability was an additional benefit, as this strategy retained almost all of the primary concrete structure, providing a 65 percent savings in embodied carbon (the greenhouse-gas emissions associated with materials manufacturing and construction).

Working within the regular structural grid required flexibility and improvisation. “With a new building, you can develop a plan from an academic timetable,” explains WilkinsonEyre partner Stafford Critchlow. “Starting with an existing frame, we had to develop a brief around what was possible.” Along with one-fifth of LSBU’s general teaching space, the Hub now provides an idiosyncratic mix of facilities, from basement bicycle storage to film studios.

In the middle of the plan, a basement sports hall and two banks of lecture theaters have been retained and refreshed. WilkinsonEyre also kept the top-lit circulation spine but has transformed it, by opening up views from floor to floor, into cafés and breakout spaces on either side, and to the outside world. Wayfinding once required a map. It is now intuitive.

After stripping the building back to its frame, alterations were largely made with a light touch. Structural defects in concrete columns and coffered floor slabs were remedied with carbon fiber, but ordinary scars are left unfilled. New additions have an industrial flavor: a poured resin floor, steel stairs and bridges spanning the void, and cables routed in galvanized conduit and ceiling trays. A long-life, loose-fit approach is well-suited to LSBU, where most courses are vocational and change in step with the wider economy. Interiors are spare but no longer spartan, warmed by inexpensive accents including plywood, acoustic baffles, and a graphic image by artist David Bomberg on the wall facing the entrance. Plywood acoustic baffles are arranged across an image, by artist David Bomberg, within the Hub’s internal street (4 & 5). Photos © Edmund Sumner On my visit during freshman orientation week, it was clear that new students had confidently taken possession of the Hub. There were pop-up clothing shops in the foyer, and posters plastered to the columns. “You don’t need much color in these buildings,” noted Critchlow. “Students will always add it.”

The most significant alteration is to the upper floors, where the architects saw an opportunity to relocate the main university library to the Hub by repurposing two of the building’s three open-air lightwells, around which offices were previously arranged. This was no simple matter, as the presence of existing facilities below meant that load couldn’t be carried down to new foundations. Instead, the architects suspended the library floor on thick steel rods from new beams at roof level. The new roof structure is concealed within a folded ceiling of slatted wood, with skylights in the peaks. At first sight, the expansive volume and fine finishes are quite imposing—and with bookshelves zigzagging across the floor, rather formal, but its design promotes the same relaxed ambience found elsewhere in the Hub. “We wanted students to feel like it’s their space,” says Chojna. Staff offices are tucked out of sight. Glass-walled rooms around the perimeter of the library are ostensibly for quiet study, but double as self-organized day care for students with young children. There are places to prepare food—something students requested in consultations that also elicited strong views on everything from multi-faith prayer rooms to the provision of restrooms. “We spent more time discussing that than almost any other issue,” says Critchlow.

Already, the building is used in ways the architects did not anticipate. Many students returned to campus after the pandemic with new habits, such as clustering to watch streamed lectures. Variety in the scale of spaces is proving valuable, as is the eccentricity of those arising from a retrofit. Watching as visitors to the Hub found their own place—gathering in rowdy groups in the atrium or secluded in little nooks to study between the old and new facades—they all seemed very much at home. I came away confident that, at last, this is a building that could be loved. 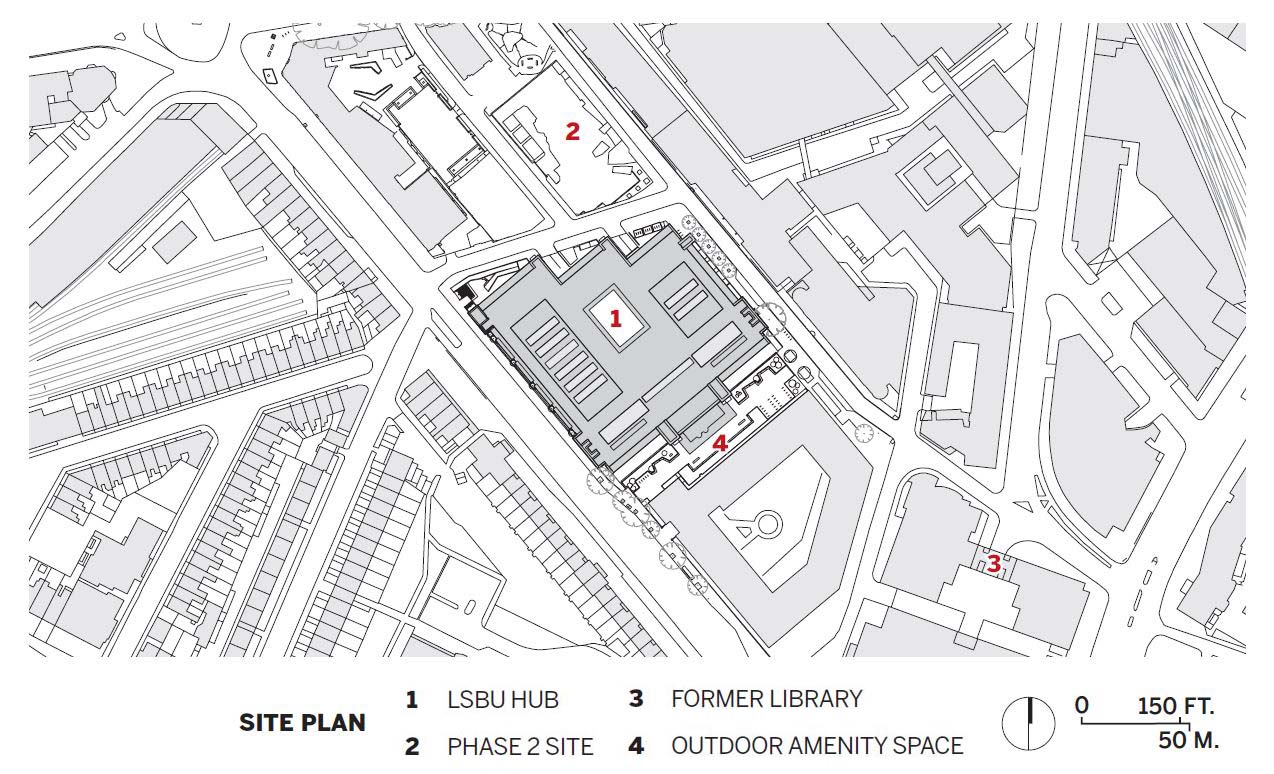 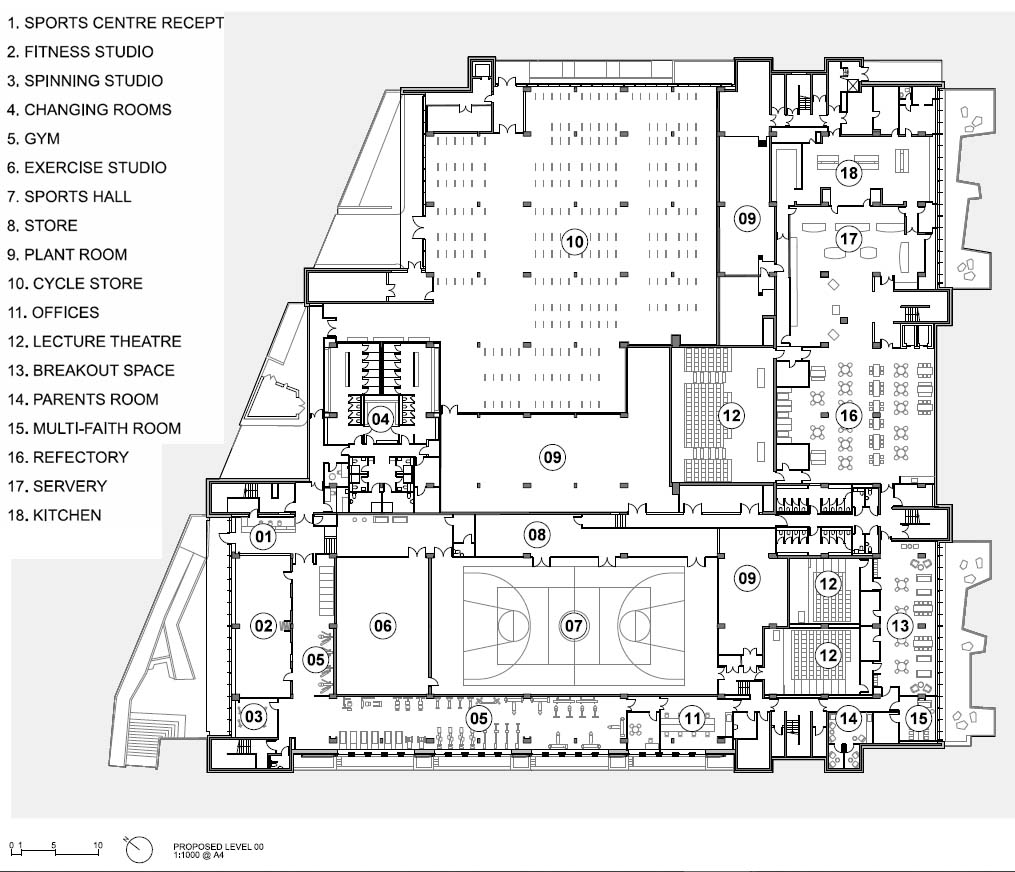 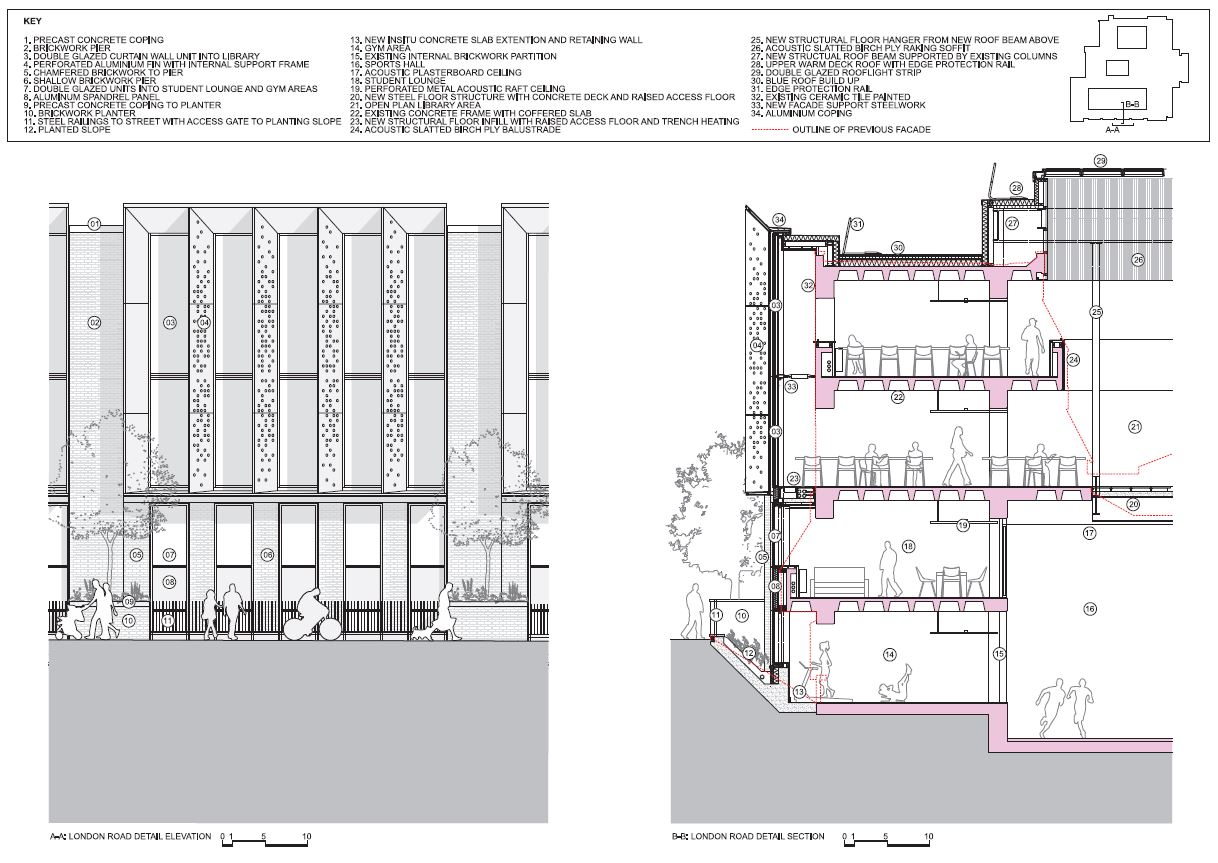