Bologna-based Mario Cucinella Architects (MCA) recently completed the new administrative headquarters, known as the Rectorate, of Roma Tre University. The building houses spaces for several university functions: the Aula Magna (or great hall), the “piazzatelematica” (the principal IT center of Roma Tre), offices, and other dedicated Rectorate areas. In line with the building projects of universities around the world—facing new challenges for representing, branding, and updating the ever-evolving role of higher education—the architecture embodies an innovative vision of the synergy among technology supporting sustainability, nature, and (thanks to the new public spaces that are an intrinsic part of the design) enhanced social life.

MCA’s composition—three tall cylinders over one covered and one open public plaza, connected to two additional levels containing classrooms and meeting rooms—is intentionally fragmented to “remove the institutional character,” according to Cucinella, in favor of a more open and accessible idea of education. The project is part of the broader urban-redevelopment program for the Ostiense-Marconi-Garbatella area, in the south of Rome, where the university aims to fulfill the dual role of making higher learning accessible and generating social and spatial urban encounters.

The three main volumes, rising up like landmarks in the neighborhood, recall the forms of the large gasometers that stood near the site, as if a memory of its onetime industrial identity. Here, however, the circular plan of those gas holders is compressed gently into elliptical form by the public space, which takes on a dimension of its own as lungs for the urban fabric of the project. The three curving towers, on the north side of the site, placed in an irregular line, seem to be slightly shifting, rotating, and giving the impression of movement, while holes of organic shapes perforate a canopy that extends to the south. The design’s most intriguing aspect undoubtedly lies in this synergy between built and unbuilt, private and public, and in the formal continuity of sinuous extruded and voided footprints. Three elliptical volumes rise up as a landmark in the neighborhood (top) above a covered public space (above). Photo © Moreno Maggi, click to enlarge.

The project sits between a more residential area to the west and a more commercial one on the east. Toward the west, a parking lot has been transformed into public space—a gathering point at the gateway to the new university complex. To suit the contemporary sensibility of an open educational institution, the western tip of the ellipsis is a transparent space. Passersby on the street can visually participate in events hosted inside the university buildings, such as conferences, exhibitions, and meetings.

The main idea was to design “a building that speaks to the city,” Cucinella says. “The university opens to the road rather than closing itself off. It seemed like a very nice message, in line with the times; it is a better representation of the spirit of education, which is no longer the guardian of something within but is something open.” The transparency of the facade (2) offers light-filled spaces for convening that are visible to passersby (1). Photos © Moreno Maggi The promenade from outside the university boundaries continues inside to the public plaza, where biomorphic planters have wide rims that can be used as seating, and their plants, including trees, allow views of the glass facades to be filtered through leaves.

Over the plaza is a huge, curving railed terrace, accessible directly from the Aula Magna and offices. In the future, this upper-level open space will host events and activities for both the university and neighborhood residents, offering a new perspective to those who live in the area. The terrace has cell-shaped openings that provide light and air to the trees in the plaza below. The railing around them is made of elegant linear white steel strips that are cleverly extended down toward the public space below, so that, like the trees, they vibrate gently in a breeze. The vertical steel strips of the railings on the upper terrace (3) are mirrored in the green brise-soleil (4). That color palette carries over to a conference room (5). Photos © Moreno Maggi

This linearity is reiterated in the buildings. The curved facades are punctuated by vertical brises-soleil, colored in different shades of green, which filter the sun and reduce heat absorption. Besides the energy-saving properties of these brises-soleil, their bright green hue makes the buildings visible from a distance, pops of color against the neutrals of the urban context.

As in all MCA’s projects, sustainability was a key priority for the new Rectorate. Minimizing energy consumption was achieved both through technology and the buildings’ overall design.

Cucinella believes in using technology only moderately to achieve sustainability goals; it is not, he says, “the solution to the problem. The solution is the architecture, the form. Architecture can give an answer that mitigates, and then technology helps to improve it.” While the brises-soleil, solar panels, and low-E glass, among other sustainable devices, certainly help, the building itself is shaped to minimize energy consumption, developed according to the principles of passive design to optimize comfort indoors and out.

The elliptical plan is cut with terraces and overhangs on the south, which act as thermal buffers between the conditioned spaces and the outdoor air, to modulate the solar absorption, enhance natural ventilation, and reduce the demand for cooling. The elliptical shape itself allows a reduction of glare and summer overheating on the east and west facades. Climbing plants on the southern facade—currently underdeveloped due in part to recent severe drought—will eventually cover the metallic green strips with natural vegetation.

With his Roma Tre project, Mario Cucinella shows that energy sustainability can be integrated into a broader social agenda for the city. This design for urban friendliness and openness makes a rethinking of the role of education and quality of life compatible, and brings nature and architecture into a balance that is crucial, particularly in this moment of social, economic, and environmental crisis. 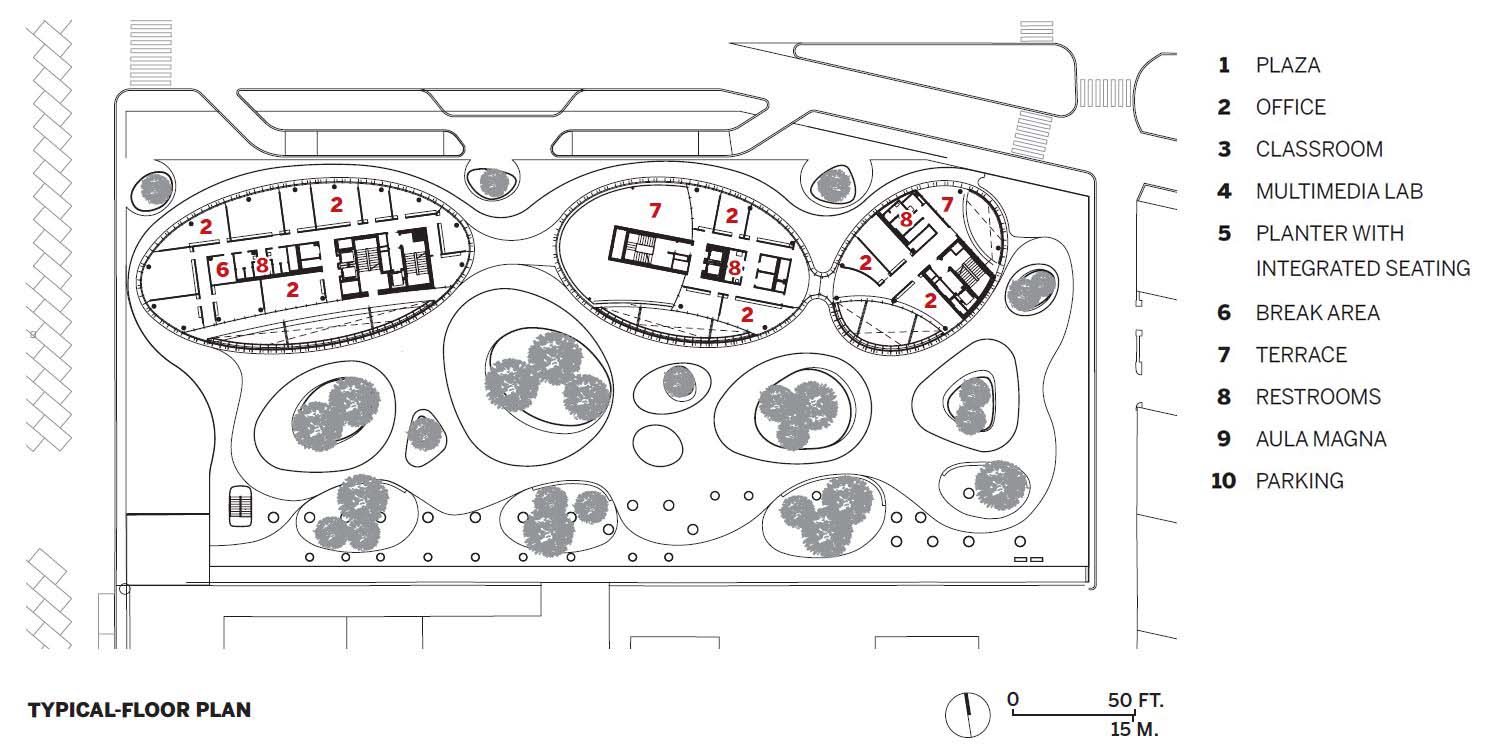 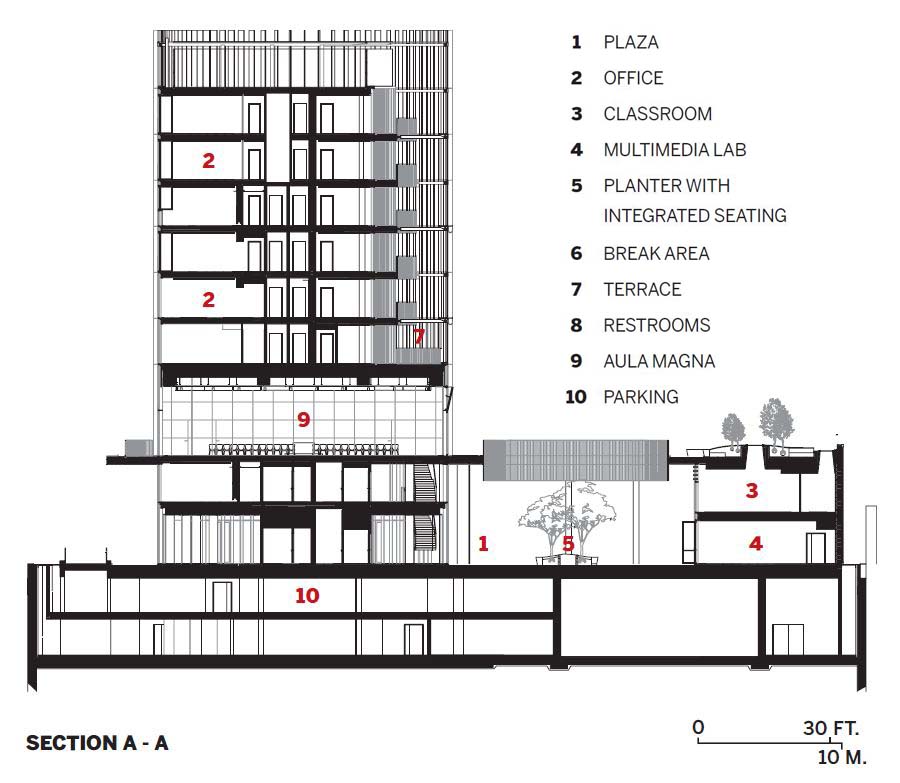 Leonardo Zuccaro Marchi is an architect based in Italy. He is author of The Heart of the City: Legacy and Complexity of a Modern Design Idea. Currently, he is the cofounder of Co.P.E., a postdoc at The Free University of Bozen-Bolzano, and guest researcher at ETH-Zurich.