Buildings by Modernist master Mies van der Rohe have reached an age where they may require rehabilitation. Recent examples include alterations to the 1972 Martin Luther King Jr. Library in Washington, D.C., by Mecanoo and to the 1968 Neue Nationalgalerie in Berlin by David Chipperfield. Both projects involved painstaking restoration. In Chicago, for the $70 million makeover of three dormitories, which form a quadrangle at the northeast corner of the Mies-designed campus of the Illinois Institute of Technology (IIT), architect Dirk Denison took a different approach. The exterior envelope of each building was almost completely demolished (above) and rebuilt (top). Photo © Tom Harris

When we think of Mies, we usually think of elegantly detailed curtain walls with refined vertical proportions. But these nine-story, 72,000-square-foot dorms, originally completed between 1953 and 1955, are more modest. Alternating horizontal bands of buff-colored brick and aluminum-sash windows fill their exposed concrete frames. Former Chicago Tribune architecture critic Blair Kamin calls them “workhorses,” in contrast to “masterworks” such as Crown Hall, the much-revered 1956 steel-and-glass landmark, which is home to IIT’s College of Architecture and was faithfully restored by Krueck Sexton Partners and Harboe Architects in 2005. The three Mies dormitory buildings upon completion in the 1950s, with SOM’s Gunsaulus Hall in the foreground. Photo © University Archives, Paul V. Galvin, Illinois Institute of Technology, click to enlarge.

Does a workhorse deserve the same deferential preservation as a masterwork? That depends on several factors, including how badly the buildings have deteriorated. Deferred maintenance had rendered these unhabitable. Water penetrated roofs, basements, and brick knee walls, which had no weep holes to let it out; radiant heating in concrete floors was beyond repair; and windows, badly corroded, single-glazed, and thermally unbroken, rendered interiors defenseless against Chicago’s weather extremes. As a result, the dorms sat vacant for 10 years.

Then, there was the renovation budget: approximately $300 per square foot and a condensed schematics-through-construction schedule that ranged from 15 to 18 months for each building.

“A reliable preservation motto,” says architectural historian Michelangelo Sabatino, who, like Denison, teaches at IIT, “is repair, don’t replace.” But Denison and project architect Justin DeGroff, working in a design-build partnership with Gilbane Building Company and guided by the Commission on Chicago Landmarks, determined that little beyond the painted concrete frames and brick-clad elevator cores could be salvaged. “We recognized,” says Denison, “that we needed to go beyond preservation into what we’ve been calling ‘heritage renovation.’ Our first and most crucial decision was to set a constraint: we would maintain the exterior appearance in line with Mies’s design intent.”

Denison completely rebuilt the exterior envelope. He replaced the outer wythe of brick, matching the color as closely as possible while adding insulation and moisture management behind. New windows look much like the originals, but with insulating glass and thermally broken aluminum frames in a clear anodized finish. On the ground level, floor-to-ceiling glass enclosures now have double glazing. To accommodate its additional thickness, the architects had to beef up the storefront-style framing, but they diminished its visual impact, ironically, by adding a signature Mies detail that had not been there: the re-entrant corner. The new corner detail is visible from the exterior walkway. Photo © Tom Harris

Each building has square concrete columns rising from a plinth, originally paved with 40-inch-square travertine tiles. In the lobbies, these have been retained and cleaned. In the open-air loggias, where they suffered irreparable damage from Chicago’s brutal freeze/thaw cycles, they have been replaced with 20-inch-square porcelain pavers. DeGroff explains that schedule and budget constraints precluded matching the original size, but joints align neatly from outside to inside, where salvaged travertine has been recycled to replace damaged pieces.

Originally designed as apartments for faculty, staff, and married students, interiors have been reconfigured to house up to 890 undergraduates. Kacek Hall has two pinwheel-plan “pods” per floor, each containing 11 student rooms wrapping around a lounge and a communal bathroom. Carman Hall has apartments for upper-level students, and Cunningham Hall is a hybrid of both. All three have generous common areas, of which the most impressive—and the most Miesian—are the glazed ground-floor lobbies. System upgrades include resident-controlled heating and cooling, accomplished with a variable refrigerant flow (VRF) system, supplemented by mechanical ventilation for fresh air. Denison is no stranger to IIT’s culture of reverence for Mies. “I studied at IIT in the late ’70s and early ’80s as part of the last generation of architects trained under his full curriculum,” he recalls. “Since I began teaching here three decades ago, I’ve been deeply involved in the stewardship of the campus. And I live in a Mies tower five miles north.” Even so, responses to his interventions have been mixed. “This renovation raises questions about the value of design versus the authenticity of original materials,” says Sabatino, describing Denison’s work as a nod to Mies rather than a bow. “These are not landmarked buildings, and this was not a historic-preservation project,” Denison counters. “We worked diligently to meet high performance objectives while still being respectful of the original design intent.”

Kamin, in a glowing review for the Tribune of Kacek Hall, the first of the dorms to reopen, wrote, “this solid work of mid-20th-century Modernism has emerged with a respectfully refreshed exterior and an interior that messes ever so slightly with Mies to respond to how students live today. Even the sometimes overzealous defenders of Mies’s legacy, the so-called ‘Mies police,’ are unlikely to object to the result.” Reed Kroloff, dean of IIT’s College of Architecture, concurs, adding, “What had been an unsightly corner of abandonment on the campus has now become a place of great pride.” The landscape renovation too, by Chandra Goldsmith-Gray, whose father, architect Myron Goldsmith, was a Mies student and protégé, gets high marks. “It deeply respects the IIT campus idiom of drifts of canopy trees that enclose a clearing, originally established in the 1950s by Mies colleague Alfred Caldwell,” says Ron Henderson, Director of IIT’s Landscape Architecture and Urbanism Program. Nonetheless, Sabatino asks: “Putting aside inevitable budget constraints, what exactly is left of the original Mies buildings other than the concrete structures? Is this enough?”

But budget constraints are not easily put aside. And architecture is not like painting or sculpture, where the original paint or stone is essential to its value. Architects create designs. The physical task of translating those designs into buildings is done by others. If that work deteriorates beyond repair and is then redone, with materials and details that improve performance while replicating the originals as closely as possible, it’s more than enough. 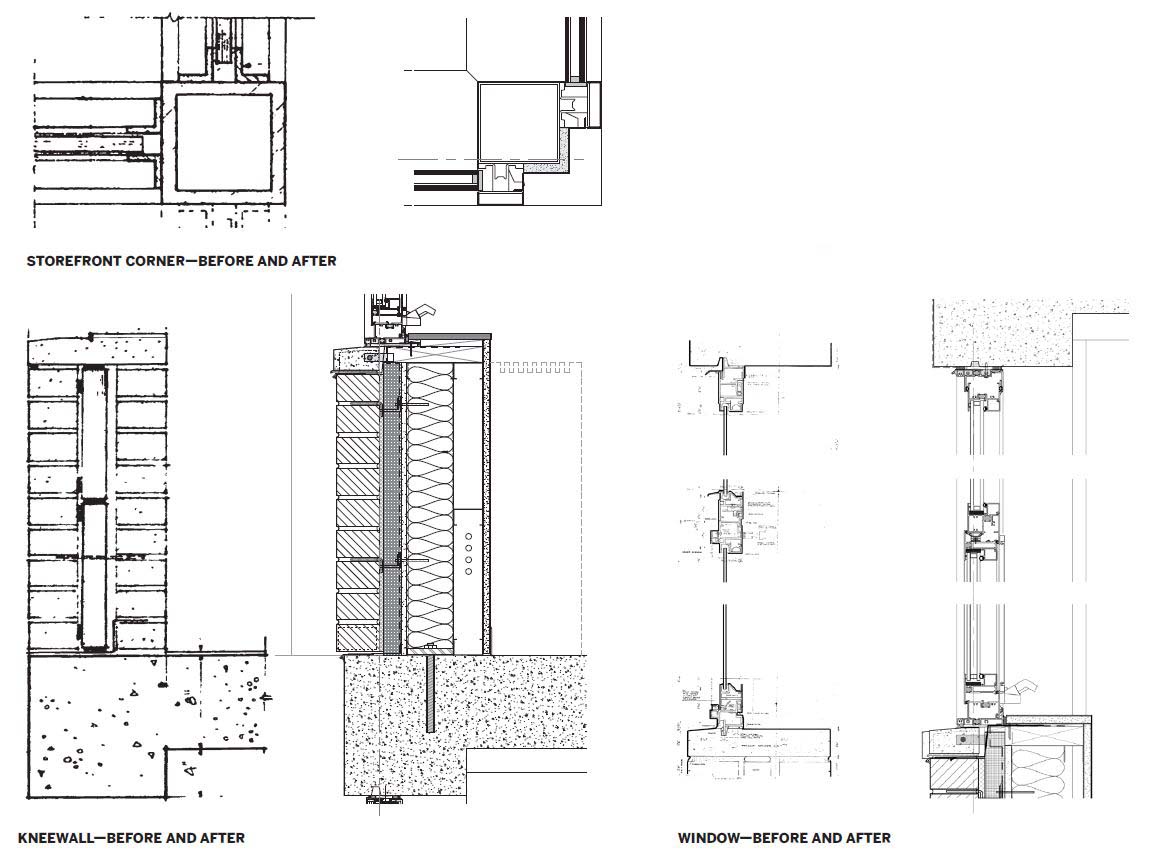 James Gauer, an architect and author based in Chicago (where he lives happily in a Mies tower) and San Miguel de Allende, Mexico, contributes regularly to RECORD.