The revitalization of the Martin Luther King Jr. Memorial Library in Washington, D.C., is the crowning achievement of the two-decades-long effort to overhaul the district’s 26 public library branches, with notable architects (David Adjaye, Phil Freelon, and Bing Thom) contributing new buildings in underserved neighborhoods. But the MLK Jr. building, originally designed by Ludwig Mies van der Rohe and opened in 1972, serves as the system’s central library, a 426,000-square-foot Modernist jewel in the heart of downtown, just four blocks north of the National Mall and six blocks east of the White House. Refurbishing the building had been a long time coming: wayfinding was difficult; single-pane glazing made spaces either hot in the summer or cold in the winter; the lower-level auditorium felt cramped.

When the renovation—designed by Dutch firm Mecanoo and local partner OTJ Architects—was completed in September 2020, the Covid pandemic was in full swing and the fanfare for the project was less in the spirit of a grand reopening than simply an acknowledgment that the building was no longer closed. Visitation was limited to ground-level access for computer use and book checkouts; a planned café had yet to open; the auditorium echoed footfalls but was otherwise silent; and the rooftop garden, arguably the library’s biggest asset beyond its collection, was unoccupied and still growing in. The Grand Hall (top) retains the bones of its original iteration (1), as does the building’s exterior (2), but is less staid and more active. Photos © Trent Bell, click to enlarge.

Two years later, the pandemic continues, but far fewer restrictions remain, and the library once again bustles with a gentle, pulsating energy appropriate to its purpose. Now the ground-level café is open, and library visitors can sip at a bar-height counter beside floor-to-ceiling windows with views of the sidewalk and street. On the lower level, a multimedia makerspace—the Fab Lab—thrums with activity, from sewing machines to 3D printers. And the rooftop has become an open-air, vegetated, Wi-Fi-connected living room that is easily one of the best places to linger in the city.

Perhaps the most significant architectural move of the revitalization was the surgical removal of masonry stair cores, as well as interior corridors lined with windowless back-of-house offices within the library’s rectilinear plan. “All the shelving was in space where there was daylight, and all the people were behind brick walls in horrible rooms,” says Francine Houben, creative director of Mecanoo. Houben saw an opportunity to invert that relationship by removing structurally unnecessary masonry walls in favor of a more open plan ringed with perimeter seating, thereby bringing more daylight into the interior. On the exterior, Mies’s trademark steel-and-glass curtain wall remains visually identical to the original, albeit with a fresh coat of paint—but his single-pane glazing has been replaced with more energy-efficient bronzed low-E glass that preserves the architecture while improving its energy performance for the next 50 years of use. A  major change is the transformation of dark stairwells into light-filled circulation cores with curving railings and blond wood. Photo © Trent Bell

At the ground level, new glazing now admits daylight into generous curved stairwells that replace the former hidden vertical circulation. These stairwells are lined with vertical strips of blond wood with a black felt acoustical backing, an expression that echoes interventions taken within the Great Hall at the ground level of the library. Smooth, curving wooden handrails are supported with black-painted steel in a nod to the visible Miesian exterior geometry. The interplay between what is original to the building and what has been rethought manifests itself with deliberate material choices, such as changes in floor color to demarcate where walls once existed within the newly opened sweeping floorplates. These color shifts align with recessed cove lights where former corridor walls would have met the ceiling. Within the Mies van der Rohe shell, the interior retains many original aspects of its landmarked Great Hall, including furnishings and lighting, but has seen remarkable change at the hands of Mecanoo everywhere else—yet Houben insists that the emphasis on horizontality and openness in the plan hew to Miesian ideals. A variety of spaces reside within the old Miesian box, including a café (3) and digital commons (4) on the ground floor, a children’s library (5), and a new double-height space connecting the third and fourth floors (6). Photos © Trent Bell The MLK Library contains a variety of distinct entities: one devoted to children, another serving people with low vision, and an archive of Washingtonia, along with its general collection. Each program gets its own space and its own visual identity, with mixed success. The second-level children’s room and the teen reading room are clearly marked by lighting and furniture choices; the children’s room also boasts a wooden slide that shoots young patrons down one of the bright stair cores, adding a whiff of whimsy behind the rigorous facade. On the third floor, Mecanoo created a grand double-height reading room by carving away an interior bay from the fourth floor to open it to the one below; the firm used a similar structural carve-out in its reconfiguration of the New York Public Library’s Mid-Manhattan Branch. Downstairs, the Fab Lab continues the theme of contained chaos with a workshop full of creative tools. “Because the whole building is so Miesian, for the Fab Labs, we decided to make a lower basement where we have all these kinds of activities not controlled by Mies,” Houben says. A new roof terrace has become one of the most popular places in the library. Photo © Robert Benson

Historic-preservation considerations shaped the fifth-level penthouse, with setbacks required to keep the addition invisible from the street level and retain the appearance of the original building’s volume; Mecanoo continued the playful curvature of the vertical circulation in the penthouse roof’s overhang, which is surrounded by lush plantings interspersed with tables, chairs, and benches. Houben calls it a rooftop pocket park, and sees it as a dramatic improvement over the former mechanicals penthouse, as it also brings the 290-seat auditorium out of the basement, with a double-height space that starts on the fourth floor and raked seating that ascends to the top level, with an exit through a vestibule to the garden. All of the library’s changes, from basement to rooftop, showcase Houben’s emphasis on people-based programming in what is a model for 21st-century libraries: putting visitor needs first while making savvy choices about the right mix of social and quiet areas, serious and whimsical spaces, and necessary services as well as delightful surprises. 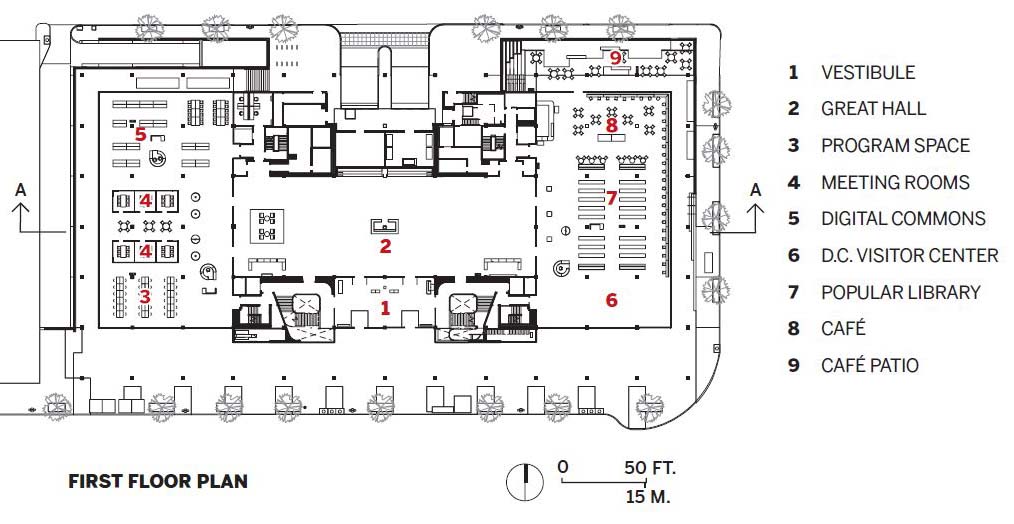 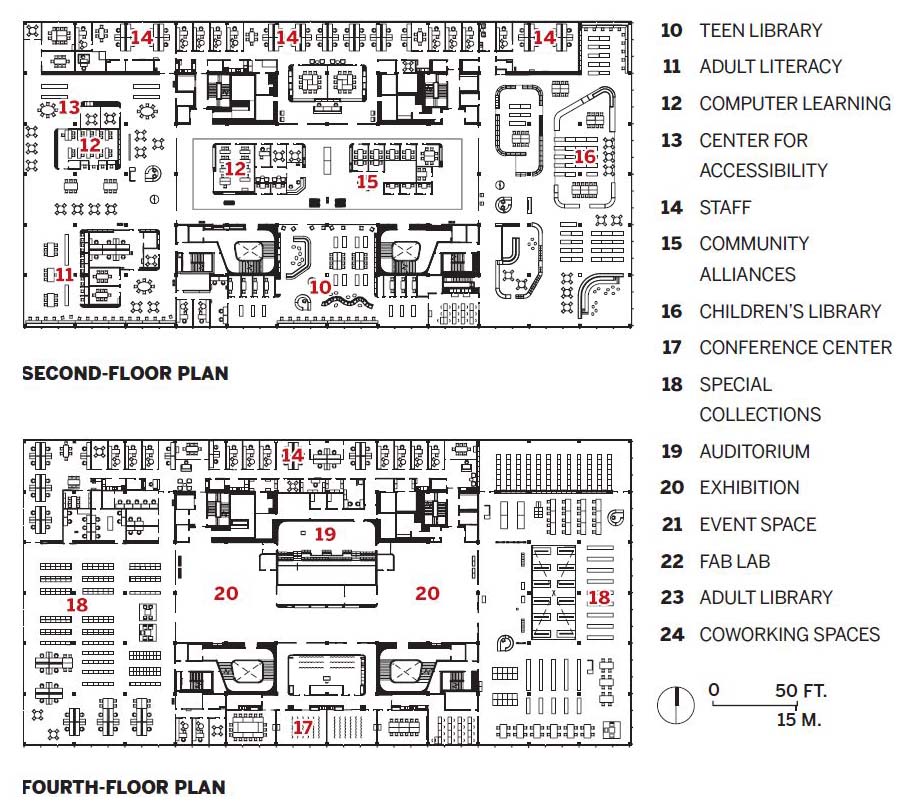 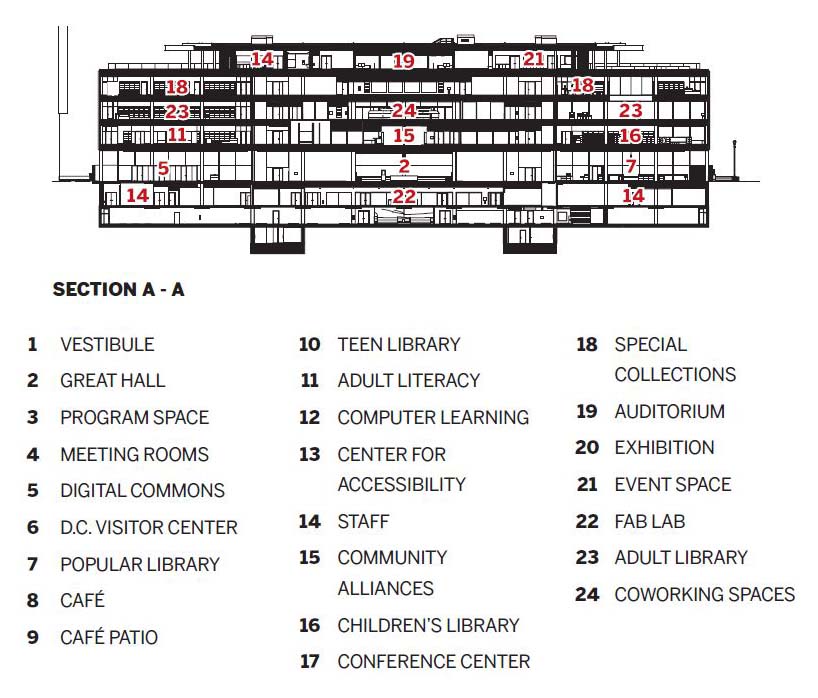