In the striking new pavilion at Japan’s Yashima Mountain Top Park, the voids are as essential as the solids. Clad with scaly stone shingles, the structure’s sinuous form snakes its way around the site, defining six gardens that capitalize on spectacular vistas of the Seto Inland Sea and Shikoku island’s mild climate. The project is the product of Takashi Suo, who worked for the Tokyo architect Kazuyo Sejima as well as SANAA for nine years before launching his Kyoto-based practice in 2015. His first commission was this competition-winning scheme.

Hosted by Takamatsu City, the program was to revitalize a treasured landscape within the Setonaikai National Park. Officially designated a Natural Monument, Yashima—originally a separate island accessible only by boat—is valued both for its beauty and history. In addition to holding a castle and a Buddhist temple, it was the site of a major battle during the Gempei Wars in the 1100s. During the 1970s, the area became a popular tourist destination, with two hotels. “It was kind of a special place to visit,” comments Suo. Then, two bridges were built, connecting it to the mainland. Ironically, that caused the number of visitors to plummet, the buildings to be abandoned, and the land to become neglected. How to repurpose this spectacular place was the question facing city officials. So they held a competition. The brief for it provided a list of programmatic pieces but left their size, shape, and disposition to the contestants. “Mainly, they wanted us to think about the possibilities of the land,” Suo explains. For Suo, plunking down a single volume was not the solution. Instead, he used the topography and viewing points to mold a collection of exterior spaces connected by a continuous corridor of a building. The architect used the topography and viewing points to mold a collection of interior (1) and exterior spaces connected by a continuous corridor of a building (2 and top of page). Photos © Laurian Ghinițoiu, click to enlarge.

Navigating a 10-foot level change, Suo’s fluid form ascends and descends, and widens and narrows along its 722-foot length. Because most of the building is lifted on slender columns, visitors can walk underneath it as they move from one side of the site to the other, as well as between gardens (which include a children’s and an aquarium garden)—three beyond the pavilion and three within its center court. Inside the pavilion, functional areas are linked by a continuous ramp that flattens and expands to incorporate a multipurpose hall, a local-exhibitions gallery, a panorama painting exhibition, an observatory, and a café. Administrative areas and restrooms are in a round structure that adjoins the sinuous one opposite its main entrance. Paralleling the interior are two covered terraces—one connecting the entrance and café areas on the courtyard side, and the other extending out from the observatory.

Overhead, the pavilion’s roof is made of locally quarried Aji stone, a material used often by the Japanese American sculptor Isamu Noguchi, whose Shikoku studio still stands nearby. Unsurprisingly, it took the skills of an old-school tile setter familiar with traditional shrine and temple architecture to install the 34,000 shingles. “Since the building shape is so organic, it was difficult to place the stone,” explains Suo. To assist, the architect created a 3-D CAD drawing showing the position of each piece. Simple 1-centimeter-thick rectangles, the tiles were attached to waterproof sheets and wood panels. These are supported by the roof’s structure, which is concealed by an angled gypsum board ceiling. “Technology should be unseen,” says Suo. Composed of welded steel elements, the roof frame’s complex shape was fashioned from more than 2,000 I-beams and pipe beams, each one unique. The pavilion’s roof is made from locally quarried Aji stone. Photo © Laurian Ghinițoiu

Holding up the roof frame are 4-inch-diameter solid-steel circular columns spaced approximately 20 feet apart. Though the transparent walls appear to curve, they are composed of flat glass panels, secured with silicone joints that align with the columns. The sheets measure close to 7 feet wide, but their heights vary from 4 feet in the panorama painting gallery, where Suo wanted to minimize outward views, to 15 feet in the café, where he wanted to maximize them. Mostly, the glass stands beyond the columns, but to create the terraces, Suo placed the glazing on the room side and pulled it inward. “Normally, glass is outside of the structure, but here it moves,” he notes. To withstand the 230-foot-per-second winds that buffet the site during typhoon season, Suo used double-paned tempered glass in select places but single-pane panels elsewhere. Lateral forces are offset by strategically placed concrete shear wall segments. Reinforced concrete also forms the 9-inch-thick floor slab, which is held up by galvanized 4-inch-diameter hollow steel-pipe columns and shallow concrete footings. Due to the property’s protected status, construction had to be lightweight, and Suo could not dig deep into the ground. A series of thin, circular columns support the elevated portions of the structure. Photo © Laurian Ghinițoiu

Adjacent to the pavilion is the Reigan Café, also designed by Suo, a renovation of a privately owned timber structure with a hipped roof. Composed of three parts built sequentially over 90 years, the facility once housed a hotel, café, and souvenir shop. Instead of taking the building down, Suo kept its structure but removed the walls and reconfigured the ground level to align with the pavilion courtyard next door. Together, these two works welcome a new generation of visitors, infusing a disused landscape with fresh energy and, once again, elevating this important historical site. 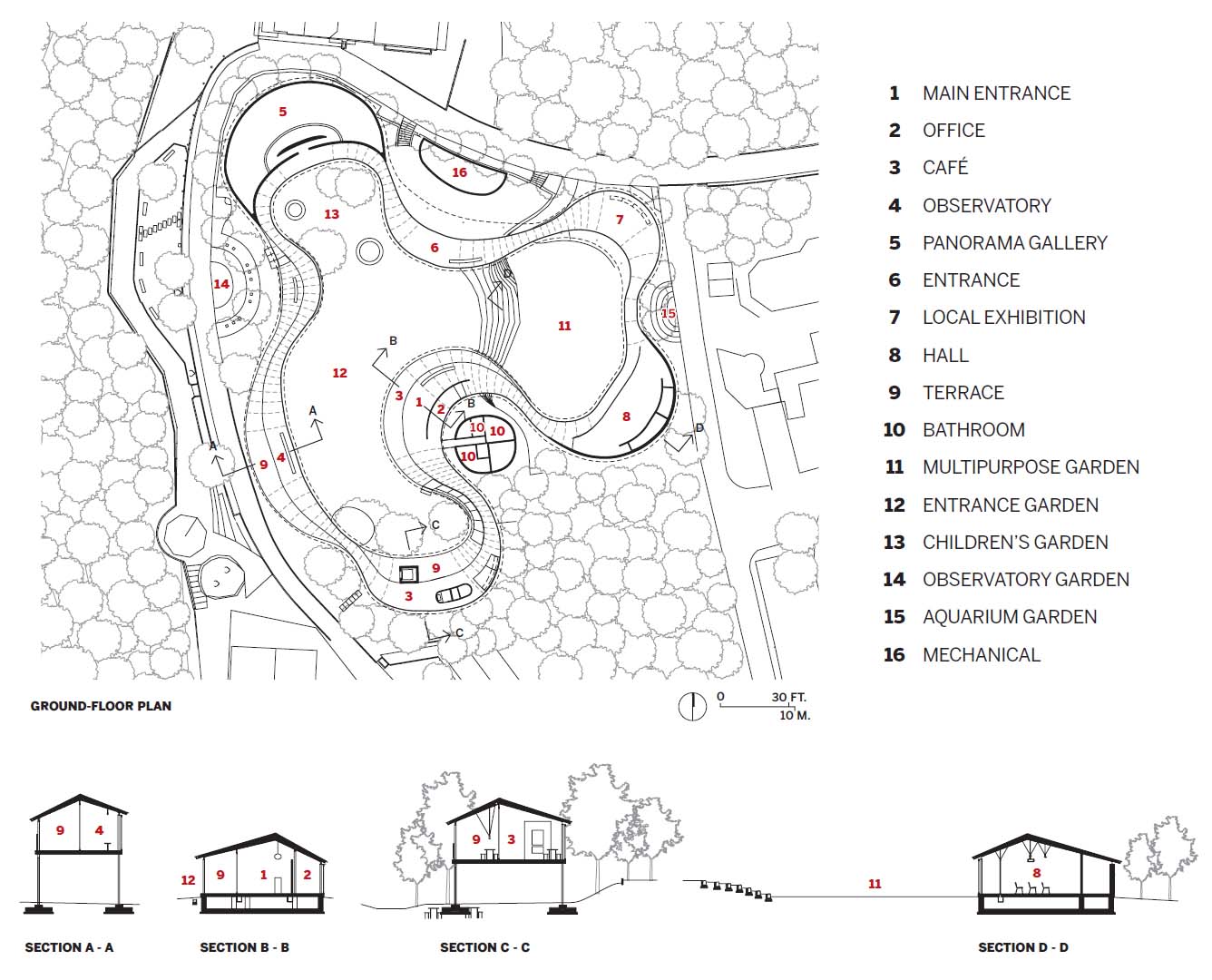