In the context of a school, says architect Daniel Bonilla, principal designer at the Colombian firm Taller de Arquitectura de Bogotá, “architecture is the third teacher.” The first, of course, is the actual instructor, and the second is the curriculum. But the buildings in which they study, Bonilla says, “teach them how to communicate, how to relate to others, how to respect a space.” At the Colegio los Nogales, a private K–12 school at the northern periphery of Colombia’s sprawling capital, Bonilla’s firm has been collaborating on the school’s built environment for more than two decades, most recently in a dramatic renovation of the school gymnasium into what the institution now calls its Sports and Culture Center. Appendages clad in coffee-colored panels (above and top of page) house programmatic elements that include a snack bar and dance studios. Photo © Roland Halbe, click to enlarge

The project, Bonilla’s seventh on the 33-acre campus, began with a basic requirement to update the old athletic infrastructure. Founded in 1982, the school shifted to its current campus in 1990. Original to that period, the gym needed a new floor to meet the rigorous standards of the Council of International Schools and the New England Association of Schools and Colleges, both of which Los Nogales follows assiduously. The gym had also been erected long before the passage of Bogotá’s most recent seismic regulations from 2010. The architects managed to make the necessary adjustments to the original steel roof trusses and concrete columns and beams, but reinforcing the walls would have been “such an invasive process,” says Bonilla, “it would have cost the same as knocking them down and reconstructing them.” Bonilla and his team therefore opted to maintain the structural system but rebuild everything that wrapped around the volume.

Bonilla took the existing building’s materials as a point of departure. The original structure had consisted, essentially, of four brick walls and a gabled roof, supported by the concrete columns and beams—little more than a warehouse over a wood-floored court. The renovated building, in accordance with the changing standards of competitive private institutions like Los Nogales, would need to provide multiple uses, with flexible seating, a stage for assemblies and performing arts, as well as auxiliary classrooms for aerobics, dance, and meditation. Inside, especially in an upstairs hallway, the pleats read as ribbing. Photo © Roland Halbe

The first step, after making the mandated adjustments to the building’s basic structure, was to replace the four planar surfaces of the building’s walls with delicately pleated brick, an approach that created visual dynamism while lending additional rigidity to the non-load-bearing walls, in accordance with the seismic regulations. Seen from the building’s interior, particularly in the upstairs hallway, the pleats read as columns or ribbing, a visual trick exaggerated by the apertures in the masonry surface, which provide for both ventilation—essential in any sports facility—and the infiltration of daylight. The choice of a pale, sand-colored brick, similar in tone to the maple gymnasium floor, envelopes the building in a warm, embracing monotone, ideal for Bogotá’s chilly montane climate, while the folded melamine-coated MDF acoustic panels that form the ceiling offer shifting glimpses of skylights and roof trusses, a delicate visual hide-and-seek in an otherwise prosaic space. To contain the new elements of the program, Bonilla added external structures on the short ends of the building’s prism—“parasitic elements,” he calls them—cloaked in laminate panels the color of dark-roast coffee that “make these appendices really clear.” The addition on the southern facade contains a snack bar and circulatory spaces that connect the ground floor to the upper levels of the bleachers. On the northern end of the building, two projections cantilever out over a sunken garden of ferns and philodendrons. Facing the Center for the Arts, which Bonilla built in 2009, the rooms within each appendage function as annexes to the 2009 building and as a hinge between activities that many schools separate, sports and the arts. Inside, maple panels and mirrors for dance classes line the walls. The same panels rise on pyramidal vaults to skylights that fill the rooms with delicate, diffuse light. “When the kids come in here,” says Rafael Muller, the school’s physical education coordinator, “it’s like taking a deep breath.” Gaps between the gymnasium’s folded ceiling panels offer glimpses of the roof’s structure and its skylights (1 & 2). Photos © Roland Halbe That sense of meditative calm has been essential to Bonilla’s work throughout the campus of Los Nogales, where his firm’s projects have included a library, cafeteria, administrative building, and a chapel whose lateral walls open out onto the central quad. Built principally with brick and concrete, the buildings are rich in secondary spaces—stairwells, inner courtyards, and galleries, where students gather to work and socialize between classes—but also minimal in their materiality.

“If everything we experience in the city is congested, loud, full of information,” Bonilla says, “then schools need to provide the opposite: austerity, sobriety, silence.” Leaving these spaces blank, porous, and adaptable also creates opportunities for students to invent entirely new uses, to interact in ways that adults—teachers and lawmakers and architects alike—can rarely anticipate. When it rains, as it so often does in Bogotá, the Center for Sports and Culture can become a playground. Teachers use it for assemblies. The student leaders, or “captains,” have appropriated the space for an annual dance competition called the Candelazo.

In its diversity and adaptability, the entire building resembles the circulatory spaces of Bonilla’s other projects at Los Nogales. Open to interpretation and experience, it is a civic education in itself. “The students love this space—everyone wants to use it for everything,” says Muller. “It makes you want to do things better.” 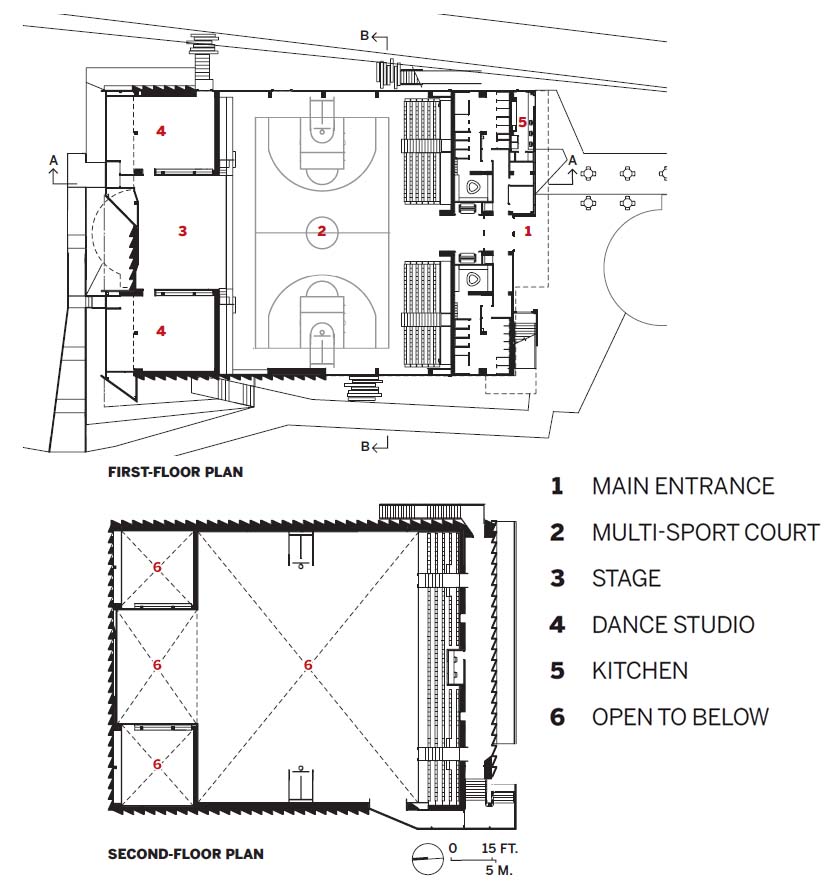 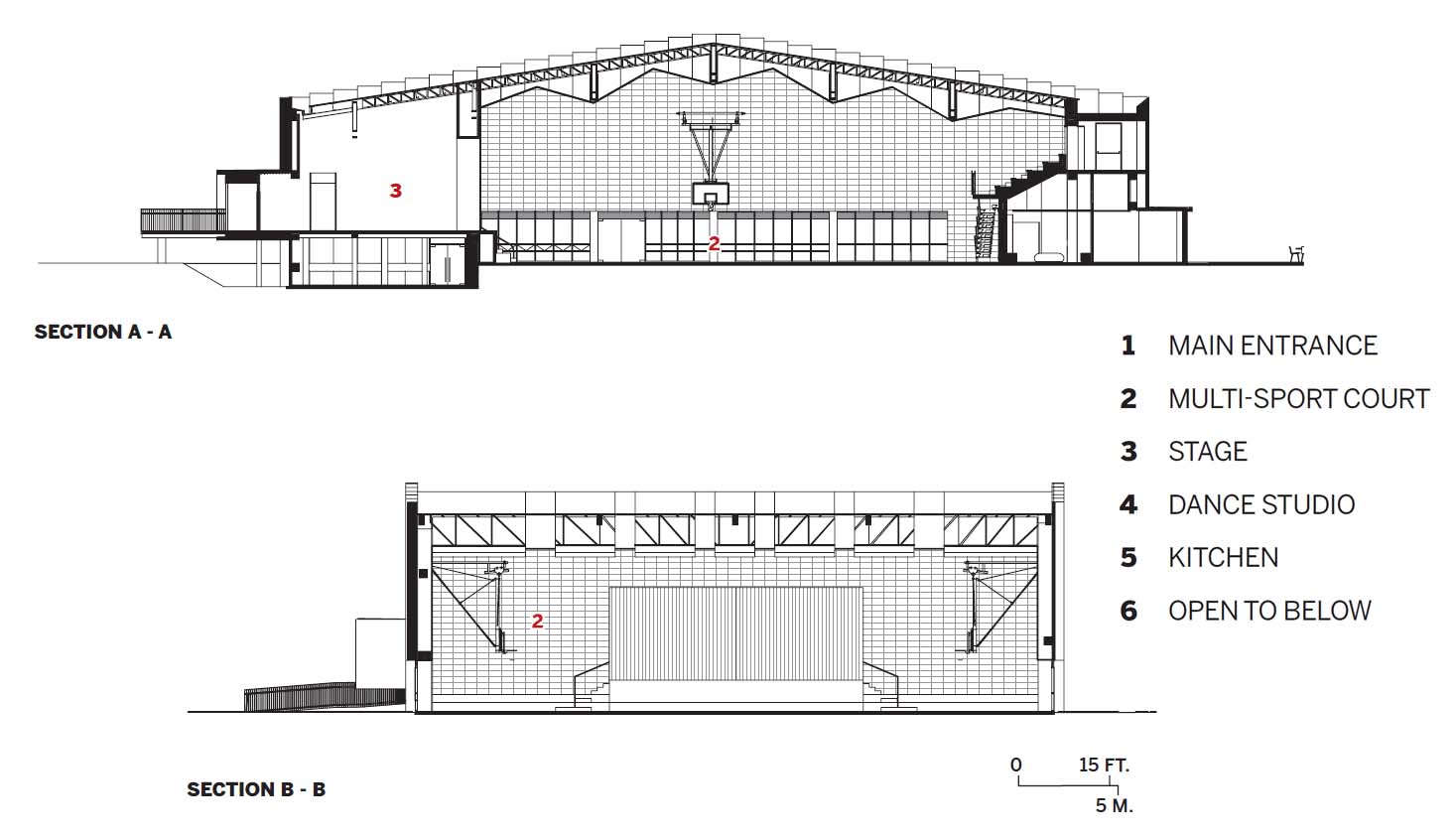