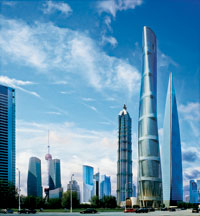 For the second consecutive year, Gensler maintains the top position on Architectural Record’s Top 300 Architecture Firms list, which ranks companies according to architectural revenue in the prior year as reported to our sister publication Engineering News-Record.

Gensler reported total revenue of $807 million, a 5.6 percent increase from the prior year. The San Francisco-based firm has 43 offices scattered across the globe and is on track to complete the world’s second tallest tower in Shanghai by 2014.

"I think we’re seeing design innovation driving our growth,” says Gensler executive director Diane Hoskins. “Clients are looking for new solutions, and through an interdisciplinary approach to our work, we are able to bring fresh ideas and new ways of looking at projects."

AECOM Technology Corp., a Fortune 500 company that has traditionally jockeyed for first place with Gensler, came in second with reported architectural revenue of $468.56 million.

In 2012, the top 300 companies in America collectively earned $10.9 billion, with the top 25 firms bringing in over half the total revenue. While a 10 percent total revenue upsurge in 2011 alluded to light at the end of a post-recession tunnel, growth flattened in 2012 with a 1 percent gain in total revenue. However the Construction Industry Confidence Index, a metric also tabulated by ENR based on surveys sent to construction industry executives, has reached a five-year high of 64 points, up 14 points from last year.

According to the Top 300 Architecture Firms survey, architects made significant gains in overseas earnings: the 2012 data reveals international revenue grew by 8.6 percent to comprise one-fifth of total revenue, whereas domestic decreased by 1 percent. “The concern is the public sector is declining because of budget pressure,” observes Gary Tulacz, who manages the surveys at ENR. “With budget cuts, federal programs have ended; states are strapped for cash.”

Other notable shifts in the rankings included a 141-position leap by Science Applications International Corp., a Virginia-based firm, to 40. Rafael Viñoly Architects PC, holding the 20th position last year, did not submit a survey for the 2013 rankings, nor did 33rd-ranked Belt Collins.