Whether it’s a cozy restaurant designed for one of the town’s film notables (Paul Newman), a 1.5-million-square-foot corporate headquarters in Stamford, Connecticut, for an international financial giant (The Royal Bank of Scotland), or his own offices, Roger Ferris, AIA, approaches each architectural and design program with an eye focused on client needs and expectations. Ferris, who had lived in New Canaan, Connecticut, from the age of 14, then studied at Columbia and Harvard, returned to the state in 1986 when he established his own firm, Roger Ferris + Partners, in Westport. With a team of 12, he moved into a 1908 building that was once the town hall. As the firm expanded, it stayed in the building, but leased two ancillary spaces. Finally, Ferris decided to bring his staff of 55 under one roof. For the new headquarters, the architect transformed 2,200 square feet on the top two floors of 285 Riverside Avenue, a four-story, 1910-era warehouse, beside the Saugatuck River. 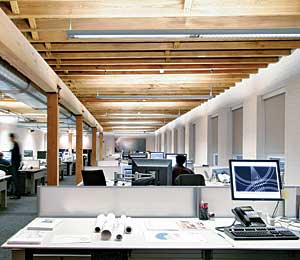 The new offices layer public and private areas. Ferris says that it might be “unusual” for clients to enter the reception area and then pass a stainless-steel kitchenette and seating area on the way to a conference room—all the while glimpsing the large, adjacent patio overlooking the Saugatuck. But, he adds, “For me, the quality of the office space is important to not only attract clients, but also to attract and maintain a great staff.”  To achieve this, Ferris removed the “cosmetic” materials that had covered almost all the interior surfaces from a previous renovation. Newly exposed brick walls were painted white and the fir joists and beams sandblasted. In the fourth-floor reception area, where visitors enter via elevator, honed, black-slate floor tile measuring 18 inches square complements the wood and the patio surfacing made from recycled automobile tires. Suspended ceiling and wall panels, variously fabricated from Sheetrock and acoustical plaster, bring the 12-foot ceilings and a row of windows into a personal scale. Here, Ferris introduced a part of his extensive private collection of contemporary art. “I’ve collected for a long time,” he says, noting that the pieces, hung throughout the two floors of the offices, are always “debated” by the employees. “The revolving selection of artwork infiltrates the dialogue about architecture” among the staff. Damien Hirst, Jenny Holzer, Robert Mangold, Edward Ruscha, and Vera Lutter are among the artists whose work is displayed in the Ferris offices.