The Institute of Contemporary Art by Diller Scofidio + Renfro

It seems remarkable that architects Elizabeth Diller and Ricardo Scofidio—longtime irreverent skeptics of the very idea of the art museum—ever won the commission to design the recently completed home of the Institute of Contemporary Art (ICA), in Boston. But ICA director Jill Medvedow—whose short list ran from Diller+Scofidio, of New York, to Peter Zumthor, of Switzerland; Office dA, of Boston; and Studio Granda, of Iceland—was more than willing to take risks. 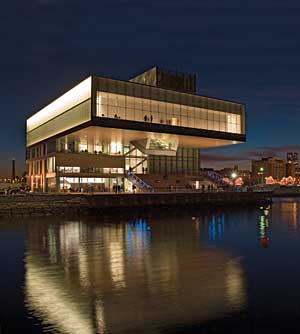 The ICA rises like a giant periscope, its lens hovering tantalizingly at the brink. Engaging the water is so key to the scheme that the structure’s landside—its main approach—almost feels like its rear. Most people, unless in a water taxi, arrive across a sea of parking lots (future hotel, residential, and mixed-use sites, now in development) to an apertureless, banded composition of channel and clear glass with matte-aluminum panels. The entry, understated as a back door, slips visitors in obliquely at the southwest corner.

On the waterside, the $41 million building reveals its most open and dynamic face. In the trade-off with the BRA, the architects were not merely broadening the HarborWalk and gaining gallery space. They envisioned the path extending up metaphorically into the building, like a single undulant ribbon “enfolding public and private realms,” as Diller puts it. With one continuous surface material—Santa Maria, a hardwood used in boatbuilding—the boardwalk “flows” up to form stadium steps (a see-and- be-seen venue) overlooking the water. The deck then morphs into the stage floor and raked seating inside the museum’s theater, only to curl back, wrapping the auditorium ceiling and rolling outdoors again as the cantilever’s underbelly above the grandstand. Revealing the wood’s course, the east and west elevations are essentially section cuts. “The Fold,” hardly a new idea, was all the rage in the 1990s, inspired by writings of Gilles Deleuze and the proclivities of emerging computer software. Despite that decade’s prodigious outflow of “folded” schemes from architecture schools and theoretical practices, only a few (from UN Studio and several other firms) actually got built.

While the ICA’s fold flows dynamically down the building’s west side, the curve becomes more rigid, far less expressive on the east face, where it seems almost a conceit superimposed on more straightforward, rectilinear forms. Diller suggests that where it unfurls into a grandstand, the form subverts the traditional notion of monumental front steps rising to a rarified domain of art. Whether or not the ICA’s understated entrance and transposed “front steps” really buck The Establishment (and that’s arguable), the building responds, most of all, to the aqueous edge.