An installation space dedicated to design, 21_21 DESIGN SIGHT is Tadao Ando’s concrete contribution to Tokyo Midtown. But conceptually, it is closely interwoven with the ideas of fashion great Issey Miyake. Draped with what appears to be a single sheet of steel, the building is an architectural play on APOC, Miyake’ s outfits made from “a piece of cloth.” It is also the realization of a dream shared by Miyake and Ando to create a design museum that would be more than a repository for chairs and household appliances from the past, but also a place to stimulate the design of the future. 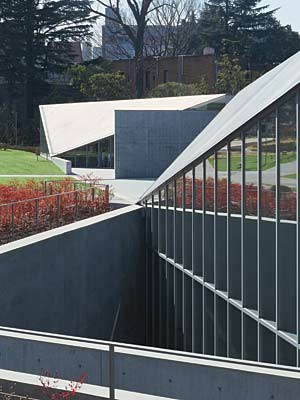 While the café and museum function independently, their entrances face each other at grade. Diners are greeted by the café’s open kitchen and tables oriented toward the parklike setting. Design mavens arrive at a reception area and then descend to the museum’s main floor and its two galleries by way of Japan’s only trapezoidal elevator or a floating concrete stairway. Echoing the building’s geometric mantra, one gallery is a trapezoid illuminated by indirect light from above. The other is a 16-foot-tall rectangle with a row of columns along one edge.

Modulated by subtle elevation changes and angled walls, the lower level is remarkably fluid and daylight-filled. To a large extent, Ando overcame the hurdles associated with building underground by creating a large trapezoidal void that unites the two floors. Composed of two adjacent triangles, one a double-height interior room and the other

an exterior courtyard, the void dominates the downstairs. Open to the sky, the courtyard can be used to convey large objects to the lower level. More important, by creating a direct connection to the outdoors, this space serves to loosen up the interior’s corset-like concrete enclosure, allowing it to breathe.