Kolumba, Art Museum of the Archdiocese of Cologne, by Atelier Peter Zumthor

Peter Zumthor’s Kolumba in Cologne is a different kind of museum. Inspirational rather than art historical, its juxtapositions of old and new religious art are meant to stimulate thinking about how different periods have addressed sacred themes. For this “museum of reflection,” as the curators describe it—an institution from which all of today’s usual entertainment factors, including a café and gift shop, are excluded—the reclusive Swiss architect known for his contemplative spaces has given new spiritual overtones to an architectural palimpsest. 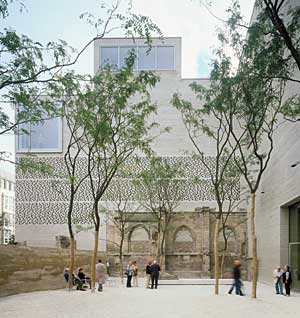 The Kolumba, founded in 1853 by the Society for Christian Art, maintains a collection of religious art that extends from a 1st-century portrait of the daughter-in-law of Emperor Tiberius to the present. In the words of curator Stefan Kraus, “The museum encompasses 2,000 years of architecture for 2,000 years of art.” The institution had suffered financial uncertainty until 1989, when it came under the jurisdiction of the Cologne Archdiocese. Within a decade, the new administration oversaw the competition for a new building to replace the 4,300-square-foot space it had occupied previously. Zumthor won with a design that uses the remaining walls and irregular polygon ground plan of the ruined Gothic church of St. Kolumba on the site. The building’s 17,222 square feet of exhibition space, costing $64.5 million, constitute almost the entire structure.

The St. Kolumba church has a twofold history, both parts of which are integral to the new building. In a neighborhood otherwise flattened during the Second World War, the survival of a late-Gothic figure of Mary on a choir pier was considered so miraculous that the Parish church commissioned a chapel especially for it from Gottfried Böhm, whose freestanding octagonal volume sits within the church’s footprint (the “Madonna of the Ruins” chapel dates to 1950, a sacrament chapel to 1957). Then, in 1973, the discovery of an important archaeological site beneath the old church revealed Roman and Gothic as well as Medieval remains.

In order to preserve access to the ancient ruins, Zumthor carefully positioned within them tall, slender steel columns sheathed in concrete, lifting the main part of the museum nearly 40 feet high. Taking his cue from the cement block walls of Böhm’s sacrament chapel, he used open brickwork for the new walls—in which a structural grid of columns is embedded—placing them on the remnants of the Gothic church’s walls. The large scale and subdued light of this space create a meditative, cathedral-like effect that sets the mood for other exhibition rooms.