Setting the scene with dramatic flair.

For her Manhattan kitchen, Emmett Roepke’s film-producer client wanted a modern overhaul that was nonetheless mellow enough to let her cooking take center stage. “She asked for a slightly muted scheme that wouldn’t outperform her personal life,” says Roepke, principal of New York’s Pan-Cosmotecture. He converted the twisting former maid’s quarters into an airy, 750-square-foot space, with hushed, luminous materials as a subdued backdrop.

That said, Roepke still inserted plenty of bold moves, including a rich walnut storage wall and custom cabinetry of frosted acrylic for stashing dishware and displaying curios. T5 fluorescents slipped inside offer downlighting while washing the interiors in a warm glow. “The invisible fixtures lend the units a ghostlike, diaphanous quality,” says Roepke. An 11¼4-inch-thick slab of acrylic supports one end of the granite-topped peninsula, which appears to float over the slate floor. Lower cabinets faced in aluminum sanded to a soft sheen reiterate the levity.

Roepke fussed over the composition to ensure crisp alignment and continuous datum lines throughout, from the pop-up vent to the recessed cooktop. Everything is flush—and thus low maintenance; “Seamless surfaces offer nowhere for dirt to collect,” he notes. Talk about a clean sweep. 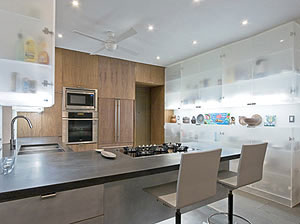