Divide and Conquer: In a district plagued by years of bond failures and overcrowding, a high school initiates a fresh start with collegiate learning tracks and a complementary campus.
Laura Raskin
No Comments

In a district plagued by years of bond failures and overcrowding, a high school initiates a fresh start with collegiate learning tracks and a complementary campus.

Grading on a Curve: A rural elementary school pays homage to its surroundings with a sinuous form nestled in the landscape.
Laura Raskin
No Comments

“Who are you?” asked a Machias Elementary School first grader as she ran out of her classroom on the way to recess and spotted out-of-place adults.

Laura Raskin
No Comments
The architect discusses winning this year's Driehaus Prize, which honors classical architecture and traditional urbanism, and how he plans to spend the $200k award. 2012 Driehaus Prize winner Michael Graves Photo courtesy University of Notre Dame School of Architecture Michael Graves is better known for appropriating traditional forms in his monumental Postmodern compositions than for being a strict classicist, so it may seem surprising that in December he was named the winner of the 2012 Driehaus Prize, which celebrates architects who advance classicism in their work. Graves, the founding principal of the New York- and New Jersey-based firm Michael Graves
Read More

Corporate branding gets an illuminating twist in two projects where light is as essential as environmental graphics to convey company philosophy in satellite offices—one urban, the other suburban.
Laura Raskin
No Comments

Smithgroup had completed four Microsoft Technology Centers (MTC) for the software giant by the time the multidisciplinary firm was asked to design a fifth, in Southfield, Michigan.

Laura Raskin
No Comments
World Building of the Year (and Office): Media-TIC, Barcelona, Cloud 9, Spain The fourth annual World Architecture Festival (WAF) wrapped up in Barcelona on November 4. More than 1,300 people attended this year’s awards ceremony, which capped the three-day event, and got a peek at the 700-plus international projects entered. Seminars and keynote speakers touched on issues of “disaster” and “difference,” including David van der Leer, assistant curator of Architecture and Urban Studies at New York’s Guggenheim Museum, who also led the museum’s team in executing the BMW Guggenheim Lab, a touring project that wrapped up its New York City
Read More

A Permanent Home for Peace

Moshe Safdie was nibbling crab cakes in the recently completed, 150,000-square-foot glass-and-concrete headquarters he designed for the United States Institute of Peace in Washington, D.C. 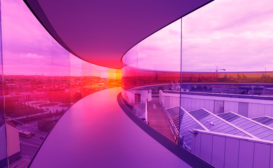 Your Rainbow Panorama by Olafur Eliasson

Rendering Denmark’s second-largest city in 52 colors, artist Olafur Eliasson has perched his permanent installation “Your Rainbow Panorama” on delicate columns 12 feet above the roof of the ARoS Art Museum, in Aarhus.