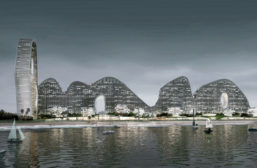 The future looms large for seven forthcoming projects around the globe that demonstrate ambition in scale and form.
Anna Fixsen
No Comments

The future looms large for seven forthcoming projects around the globe that demonstrate ambition in scale and form.

Anna Fixsen
No Comments
The New York Restoration Project Selects Architecture Firm Bade Stageberg Cox to Design a Flood-resistant Boathouse along the Harlem River. This article first appeared on GreenSource. Bade Stageberg Cox's winning design for an education center and boathouse along the Harlem River. Scarcely two decades ago, Sherman Creek, a tributary of the Harlem River in northern Manhattan, was choked by weeds and the wreckage of century-old boathouses. Now, the New York Restoration Project (NYRP) and Brooklyn-based firm Bade Stageberg Cox are on track to restore the area to the vibrant community hub it once was. On February 6, NYRP announced that
Read More

Anna Fixsen
No Comments
Tomas Koolhaas remembers when his father, architect Rem Koolhaas, was laying the groundwork for his firm Office for Metropolitan Architecture (OMA) in their London apartment. As a youngster, Tomas was allowed to doodle on the office drafting boards and shovel alongside construction workers. Both parties branched out: OMA became a ubiquitous international architecture firm, and Tomas pursued his interest in media and film. Now, after 10 years in cinema, Tomas, 33, is returning to his roots. For the past two years, the Santa Monica–based filmmaker has been piecing together REM, a feature-length documentary about his father, his father’s buildings, and—most
Read More

Anna Fixsen
No Comments
In one of his final press appearances as mayor of New York City, Michael Bloomberg sealed the deal Thursday on one of his most ambitious urban endeavors: Cornell NYC Tech, a $2-billion science and technology campus designed by a cast of architectural heavyweights including Morphosis Architects and Weiss/Manfredi, to put New York City at the forefront of the tech industry. Surrounded by officials in City Hall’s Blue Room, Bloomberg and Cornell president David Skorton signed a 99-year lease agreement for a 12-acre swath of prime real estate on Roosevelt Island, a two-mile-long islet in the East River.“Our goal has been
Read More

After spending more than a decade photographing forgotten remnants of the Holocaust across his native Slovakia, artist Yuri Dojc turned to Daniel Weil, a partner at design consultancy Pentagram, to create a traveling exhibition for the resulting documentary project, Last Folio. 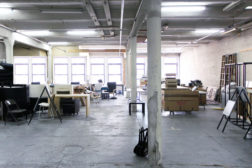 The Manhattan museum has announced plans to launch an incubator for art, technology, and design, drawing more than 60 startups under its wing.

Anna Fixsen
No Comments
The BMW Guggenheim Lab in Mumbai. It’s been quite the ride for the Solomon R. Guggenheim Foundation and German automaker BMW Group: two years ago the organizations embarked on a global road trip to document how people think about the challenges their cities face, and brainstorm solutions. The results were unveiled last week in Participatory City: 100 Urban Trends from the BMW Guggenheim Lab on view at the Guggenheim Museum in New York City. Part policy think tank, part happening, part forum, the Lab set up a pop-up space in which residents of three cities—New York City, Berlin, and Mumbai—could
Read More 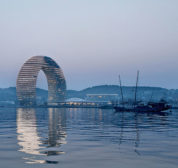 When MAD architects was approached by the city of Huzhou, China, to design a landmark hotel, the Beijing-based firm aimed to create more than an icon.