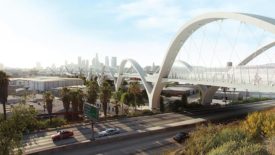 In a nod to its predecessor—the 1932 viaduct, demolished in 2016—a new bridge dubbed the “Ribbon of Light” will feature 10 pairs of concrete arches.

Winning Playbook: HNTB Architecture and STUDIOS Architecture team up to give a 1920s-era stadium at the University of California, Berkeley, a seismic retrofit and expansion that respects its history.
Lamar Anderson
No Comments

Of the many neoclassical buildings that architect John Galen Howard designed for the University of California, Berkeley, in the early twentieth century, California Memorial Stadium was perhaps the most breathtaking and the most imperiled: from its perch at the base of the Berkeley foothills, the concrete structure—part coliseum, part amphitheater dug into the hillside—offered 73,000 Golden Bears fans sweeping views of San Francisco Bay to the west, but on a site straddling the Hayward Fault.