Though the more attention-grabbing facets of President Donald Trump’s promise to “Make America Great Again” relate to curbing immigration, boosting the coal industry, and spending more on national security, a less polarizing part of his agenda includes improving the nation’s infrastructure. It was a regular theme in his campaign stump speech that Trump reiterated in his address to a joint session of Congress on Tuesday. "Crumbling infrastructure will be replaced with new roads, bridges, tunnels, airports, and railways gleaming across our beautiful land,” the president said, adding that he will be asking Congress to provide $1 trillion in financing “through both public and private capital.” 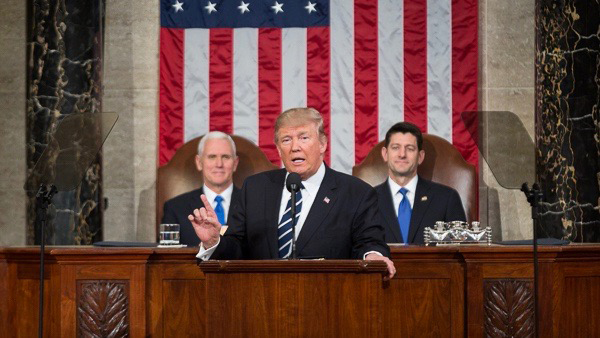 Image courtesy Office of the Speaker

But Trump provided no details in Tuesday’s speech of how the money would be raised or spent. As outlined in his campaign platform, the president would provide a tax cut worth $137 billion to corporations and private equity funds that bankroll infrastructure projects, rather than directly investing in infrastructure. The $1 trillion figure is his optimistic estimate of how much investment it would generate.

Critics—like Ron Klain, who oversaw the infrastructure investments of the American Recovery Act in the Obama White House and recently wrote about his views on Trump’s plan in the Washington Post—say it’s little more than another tax cut for corporations and rich investors.

First, Trump’s plan does nothing to remove the real limiting factor on building infrastructure, which isn’t lack of private investors willing to buy construction bonds, but rather the lack of public revenue to pay them back. To change that would mean raising government revenues through taxes, which no Republican president or Congress will support. “Republicans for years have claimed that there has got to be a way to mobilize all this private sector money, with minimal public investment, in order to do all these shiny new projects,” says Deron Lovaas, an urban policy advisor at the Natural Resources Defense Council, an environmental research and advocacy organization. “It’s just a bad fit for what the country needs.”

Third, the most cost-efficient and urgently needed investments aren’t for new construction but repairs to older infrastructure. Fixing corroding water pipes and sewer systems, broken down subway tracks, potholed roads, or the leaking Oroville Dam is cheaper and brings a greater return than building something new. Upgrading and modernizing existing infrastructure, like installing automated monitoring systems on a bridge to scan for structural degradation, could save money in the long run.

Trump’s penchant for denying climate science might interfere with spending infrastructure money wisely. Environmentalists say infrastructure investments should favor projects that reduce carbon emissions and climate vulnerability—like adding mass transit, sidewalks, and bike lanes to existing roads instead of building new highways, or improving the electrical grid instead of building new fossil-fuel pipelines. Trump and the Republican Congress are unlikely with agree that, though, on principle.

On the other hand, even if it passed, Trump’s infrastructure bill may have little effect. His current proposal does nothing to separate private, routine investments from those that would only work with a government subsidy; such a bill might just pad investors’ profit margins rather than generating much new investment—and public benefit.

Watch the full address below.