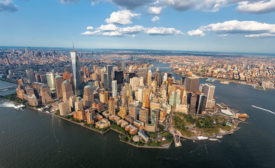 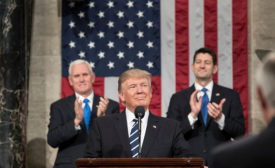 Ben Adler
4 Comments
An overview of programs relevant to architects that may be affected by the proposed budget.
Read More 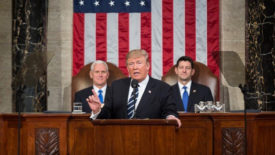 Ben Adler
One Comment
“Crumbling infrastructure will be replaced with new roads, bridges, tunnels, airports, and railways gleaming across our beautiful land,” the president said in his address last Tuesday.
Read More

Freshkills Park: Once a Landfill, Now a Lush Landscape

Ben Adler
No Comments
A common Freshkills vista: a former landfill, it is in the process of being capped and planted with native species. Since 1947, it has been one of New York’s most notorious locations: the Freshkills landfill, in Staten Island, the city’s least populated, least renowned borough. To many, it became a sort of running joke about the borough itself. After all, how seriously can you take a place whose best-known landmark is vast mounds of garbage? Now Freshkills is on its way to becoming Staten Island’s claim to fame rather than notoriety. The landfill stopped accepting trash in March 2001; now,
Read More

Brooklyn's Navy Yard is Home to a Manufacturing Revival

If creativity and coolness are measured in bicycles per capita, then the Brooklyn Navy Yard is the coolest place on Earth.

Ben Adler
One Comment
The architecture has evolved, joining design with support services. Over the last five decades, models for social housing in U.S. cities have continually evolved. First, the postwar subsidized brick high-rises—based on Le Corbusier's towers-in-the-park of the 1920s—were largely abandoned. Then, starting in the 1970s, smaller infill developments, often mimicking a neighborhood's rowhouses, were increasingly adopted. But low-rises with separate entries and limited communal space have not been able to serve all the needs of some populations, such as the elderly, disabled, or formerly homeless. Michael Pyatok of Pyatok Architects designed Fox Courts affordable housing in Oakland to provide 80 dwellings
Read More

Ben Adler
No Comments
Image courtesy EMC Writing on her blog on October 29, Susan Eisenhower, a granddaughter of President Dwight Eisenhower, endorsed President Obama for re-election. Even though the blog post made no mention of her high-profile opposition to Frank Gehry's design for the national memorial to President Dwight Eisenhower, Susan Eisenhower's endorsement could have more effect upon that fight than the one for the White House. Eisenhower is, like her grandfather, a lifelong moderate Republican. In 2008, reacting to the GOP's rightward drift, she became an independent and endorsed Obama. Perhaps not coincidentally, the Obama administration has been receptive to Eisenhower's concerns
Read More

Analysis: Infrastructure in the Election

Ben Adler
No Comments
Photo © Saul Loeb/AFP/Getty Images (left) / Mark Wallheiser/Getty Images North America President Obama in Michigan (left) / Republican presidential candidate Mitt Romney in Florida. When it comes to public infrastructure, Americans face a stark policy choice this November. More than any president since Franklin Delano Roosevelt, Barack Obama has made investing in infrastructure central to his presidency. Mitt Romney, on the other hand, says little about issues like transportation and housing. When he does, it is to suggest cuts to programs and agencies that provide them. The current administration encourages cities and states to spend federal money on projects
Read More

Ben Adler
No Comments
Image courtesy EMC An iteration of Frank Gehry's design for the Eisenhower Memorial. Political stumbling blocks continue to slow progress on Frank Gehry’s proposed memorial to President Dwight Eisenhower. The House of Representatives is currently poised to withhold the $59.84 million in funding requested by the Eisenhower Memorial Commission (EMC) in February. The proposed budget released Tuesday for Interior and Environment Appropriations in fiscal year 2013 does not include a line item for the commission. This does not mean that the EMC has been defunded, or that it will cease to exist: It may receive funding when the bill is
Read More
View All Articles by Ben Adler
Subscription Center
More Videos