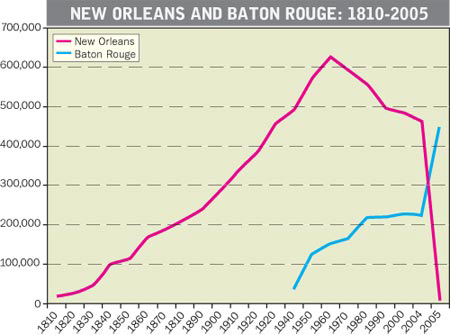 Baton Rouge became the largest city in Louisiana overnight, when evacuees fleeing Hurricane Katrina ballooned the area’s population from roughly 400,000 to 800,000, according to Walter Monsour, the city’s chief administrative officer. Becoming a first-tier city in a single day has resulted in commune-style living, depleted store shelves, and overburdened phone lines and traffic lanes.

Meanwhile, officials are still trying to get a handle on urban planning, infrastructure, and housing issues. Monsour is coordinating a group of business leaders and elected officials to identify the city’s future needs, including planning new zones for development and building a bigger airport, new traffic loops, and an enhanced transit system. “We intend to hire the best urban planner in the country that we can get our hands on to come in and replan,” he says. Baton Rouge–based architect Trey Trahan says he has been asked by the city to put together “an international team of thinkers—including Arup, Urban Strategies, and Michael van Valkenburgh” to address such issues.

Because available real estate has been virtually bought out, officials are trying to plan a city that will accommodate the still-growing populace. While no new zones have been chosen for permanent development, Monsour says that the city is looking at refurbishing three or four areas. The process must be undertaken “judiciously,” he says, “so as not to eliminate one problem and create another.” He adds: “Some pockets will be easier for communities to absorb, and we don’t want to clog any particular area.” He notes that the city has a number of lots that were being considered for development prior to the storm; construction on them will be starting very soon.

FEMA will be “picking up the tab” for those in shelters and mobile homes, and those living with family and friends, Monsour says. He expects the U.S. Department of Housing and Urban Development to sustain housing after some time.

Meanwhile, city planners are hoping to make the best of an unprecedented opportunity to bring back blighted neighborhoods, Monsour says. Affordable housing, specifically for the displaced poor, is the largest need in Baton Rouge, says Dr. Sally Soileau, a Louisiana Cooperative Extension Service agent. Limited spaces are available in public housing, but evacuees have even filled up student housing and 4-H camps.

Arthur Sterbcow, president of New Orleans–based Latter & Blum Realtors, predicts that the immediate surge of home sales in Baton Rouge will slow down when residents return to surrounding areas. But “there will still be a tremendous demand for housing in the Baton Rouge area because it will be a staging area for the rebuilding of New Orleans,” Sterbcow says.