An ambitious restoration of the Painted Hall at London’s Old Royal Naval College (ONRC) gives visitors both a unique opportunity to get within touching distance of its richly decorated ceiling, as well as “unprecedented” access to a major conservation project, says the College’s Conservation Director Will Palin.

Now a public attraction drawing 1.5 million visitors annually, the ONRC’s buildings were commissioned in 1694 as a naval retirement home and designed by Sir Christopher Wren. The hall is the opulent centerpiece of the ensemble and has Europe’s largest painted interior, created by the painter Sir James Thornhill over the course of 19 years.

Trompe l’oeil columns and arches add to the intricacy of the baroque architecture. Within this framework, depictions of English monarchs, classical deities, renaissance scientists and cloud-borne cherubs form a vivid tableau that covers 40,000-square-feet of walls and ceiling.

To facilitate the $10.6 million, inch-by-inch restoration, a giant scaffold has been erected in the hall, which the public can ascend on ticketed tours that run for 18 months beginning April 1. With the 60-foot-high working platform set just eight feet below the vault, it is possible to see both the detail of Thornhill’s brushwork and the new life coaxed from it by a team of six conservators, who perch on stepladders, dabbing gently at the ceiling with cotton wool brushes.

The original plasterwork, by Wren’s favourite plasterer Henry Doogood, remains “billiard-table smooth, which makes our lives quite a bit easier,” says conservator Stephen Paine of Paine & Stewart. Instead, the restorers are dealing both with the legacy of earlier cleaning efforts—most recently in the 1950s, when 15 coats of old varnish were removed—and with the dirt that has accumulated over six decades. These grimy deposits, produced both by human activity and a nearby power station, have left the paintings “significantly compromised in terms of vibrancy and vivacity,” says Paine. The aim is to recover the richness of color and detail with a “homogeneity of surface—no over-cleaned or under-cleaned areas.”

For the most part, the restorers are working with nothing stronger than water, which in combination with the slightly abrasive cotton wool is sufficient to lift dirt from the surface. Where temperature fluctuations have caused microscopic cracking in the varnish, producing whitened patches known as blanching, a mild solution of ammonium bicarbonate is used to solubilize the surface, smoothing away the flaws to reveal the oil paint beneath.

This painstaking work will take two years, but should secure the paintings for a century. To assist in this, environmental control measures are being introduced by Hugh Broughton Architects. Shading the windows and draught-proofing doors will counter harmful pollutants and sunlight, and a new heating system will stabilize the temperature fluctuations that cause cracking. Below the hall, in a vaulted undercroft, Broughton is creating a gallery and café, along with a new entrance that will admit visitors without attendant gusts of outside air. These interventions will be incorporated “in the most invisible way possible,” says Broughton.

Additionally, a new well-hidden lighting system will reveal the paintings in all their newly lustrous glory. Even amid such opulence, says Paine, “in conservation projects, less is definitely more.” 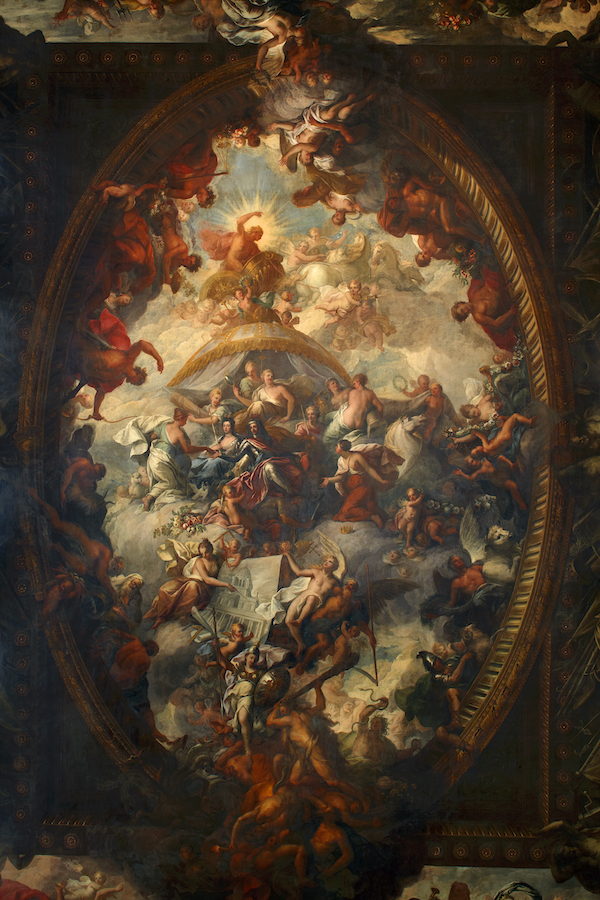