A Super-Small House Achieves an Ideal State of Design Integration 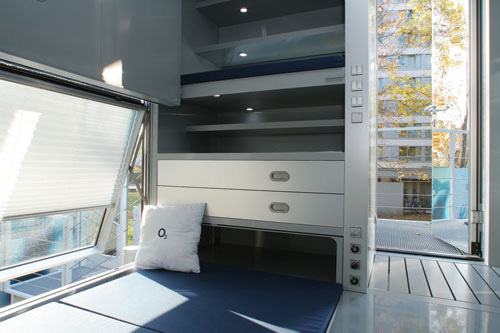 The Micro Compact Home takes cues from airline technology to incorporate electrical outlets, LED lighting, a microwave, and two flat-screen televisions into the 100-square-foot space. The house includes a shower, toilet, sink, and a hot-water heater, in addition to two compact double beds  and dining space for up to five.

Richard Horden looks to a lustrous time in design with his Micro Compact, 10-foot-square houses— a time when it was actually a pleasure to fly in an airplane.

Horden’s tightly integrated pre- fab cubes came onto the European market last summer, retailing for $60,000 installed, and he’s handling the production of twelve of them on order from a European client for a project due this fall. The houses are factory-produced in Austria.

The cubes, intended for short stays, reflect Minimalist influences, but Horden says the core ideas come from shuttling routes on commercial airlines. “I was intrigued by how well designed small scale can be,” he says. However, it’s hard to find inspiration in air travel, with one’s knees barked by the seat tray table from Narita to San Francisco. But like airplanes, the 2-ton cubes use only the materials necessary.

Horden’s maximizing of small spaces led first to the portable, futuristic Ski Haus—which featured aluminum sheeting, a propane kitchen, solar photovoltaic power— and then to this more fully realized Micro Compact house. Horden teaches at Munich’s Technical University, and six of the cubes have been used there for housing. The designer, a principal at London- based Horden Cherry Lee Architects, stays in one himself.

There’s no furniture—it’s already integrated in the design—no big paintings on the wall, and no piled papers. The plywood-and-aluminum cube is about flat-panel screens and broadband connections, a virtual space that extends the real conditions of the cube. The bed folds down from the ceiling. When the door is closed, the entranceway can be used as the shower. Every space is multipurpose. Placed on-site by a crane, the cubes connect to utilities in minutes. A low-energy version comes equipped with photovoltaics and a wind turbine.

While it’s a nod to the hyper- urban stylings of Kisho Kurokawa or William Gibson, Horden’s cube can be pictured in much more bucolic settings, such as a weekend cabin by the wooded trout stream. “It’s short stay, smart living,” Horden says, more teahouse than coffin hotel. “It shows the value of scale.”

And with the cube’s lighting system of indirect LED strips in 10 fittings, it only takes 53 watts to light the whole thing.