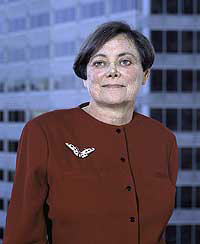 Architects tend to describe client Marion O. Sandler, the C.E.O., board chairman, and cofounder of Golden West Financial Corporation and World Savings—the nation’s second-largest savings institution—as, by turns, their toughest critic and greatest champion. Sandler’s patronage of retail architecture is singular. Over three decades, World Savings has commissioned more individual firms across the U.S. than any other commercial entity. It is prime evidence of Sandler’s eye that she hired Frank Gehry for the North Hollywood branch in 1979, before anyone could have known how cool that would be. It is evidence of her soul that famous names are not as important to her as good design.

How did architecture come to figure so prominently in World Savings’ new banks development program?

When we started building in the early 1970s, there was no industry prototype for design. The facilities were all alike and all terrible: Bank of America, American Savings, Wells Fargo. People made fun of Home Savings’ buildings, saying they could double as mausoleums. I have never felt the need to be original just for the sake of originality. If I see my competition doing something well, I’ll copy them and try to do it better. Facilities then were utilitarian, however, and not particularly functional. We had a different point of view and set out looking for architects who could deliver for us.

What was your relationship with William Turnbull?

Skidmore, Owings & Merrill had done our first headquarters in Oakland and recommended Bill, a Skidmore alum, for smaller projects. With Bill, there was no bag of tricks: He was all about defining a problem and noodling a solution. We eventually retained him as our consulting architect because I found it easier to communicate with architects if I did it through someone they respected. He said he was our “design conscience,” and he had substantial influence on vetting and hiring, and on the buildings themselves.

Your dialogue with architects is ongoing. Describe your brief to them.

Our look is open, uncluttered, well lit with lots of windows. We’ll take risks: Budgets are largely determined by location and customer demographics, yet I’d rather pay for innovation than marble floors. We’re a retail operation with obvious dictates, such as the front door takes advantage of traffic patterns and the sign faces the street. The biggest restriction in terms of aesthetics is that we’re often located in shopping centers and dependent on developer approval.

How important is it that each of your facilities is unique?

You obviously save fees and time with cookie-cutter buildings, and we once considered doing a single format across the country. But our 270 buildings could really pollute the landscape if they didn’t acknowledge their different communities. The thrill for me is in seeing the finished building. I’ve had experiences where I just about went into orbit. That wouldn’t happen if each new facility were the same.

Does the financial community recognize your efforts to elevate the architecture of banking facilities?

No. They couldn’t care less. But I’m not interested in the financial community—I’m interested in their customers. You won’t find another C.E.O. of a financial institution involved in building design. If they’re invested in architecture, it’s that of a high-rise monument—not a branch office or regional headquarters. Their focus is quite separate from mine.