Since its founding in 1851, the YMCA of the USA has overseen nationwide efforts to provide com­munities with health and educational resources. The YMCA of Greater Grand Rapids decided to amplify the Y’s inclusive mission by eliminating all physical barriers in its new facility, which also houses rehabil­itation services for partner organization Mary Free Bed Hospital. The resulting 120,000-square-foot Mary Free Bed YMCA, designed by local architects Progressive A|E and which opened last year, is not just stunning in appearance. It also has earned the world’s first certification from the Global Universal Design Commission, a Syracuse University–based nonprofit that develops universal-design standards for buildings, products, and practices.

To ensure the Y would serve everyone, the architects brainstormed with disability advocates, wheelchair athletes, and other stakeholders, says Progressive A|E project principal Michael Perry. The group sessions revealed that taken alone, the federal American Disability Act (ADA) standards focus too heavily on wheelchair users. Perry cites thresholds as an example: “A quarter-inch threshold is ADA-compliant, but any differential is a tripping hazard for people using canes or walkers.” The firm’s solution was to eliminate thresholds alto­gether at Mary Free Bed YMCA by making floor changes flush.

This mindset reaches beyond ambulatory abilities. The Y’s one-fifth-mile track features high-contrast lane lines for visually impaired joggers. The family and lap pools employ UV sanitation to reduce chlorine use, as the chemical and its smell can trigger rashes and asthma attacks; an HVAC system also actively circulates the air to whisk away any odors. Plus widespread acoustical dampening removes back­ground noise, reducing interference with assistive hearing and listening devices.

ADA remains an important benchmark, Perry notes. The 1990 law argued that separate treatment of people with disabilities amounts to discrimi­na­tion, and that spirit of integration prompted the Y to decide to have just a ramp, without an additional staircase, leading into the heart of the building. “Everybody uses the same path,” he explains. And that equality seems to be working: Perry, who is also Mary Free Bed’s branch board chair, reports that current membership and program revenues at the Y are exceeding goals. 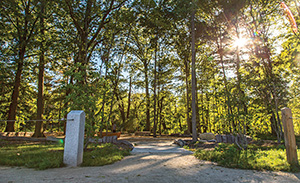 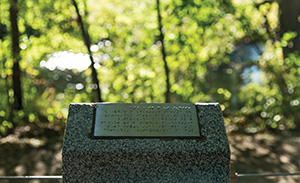 Located in the Boston suburb that bears its name, the Watertown Riverfront Park and Braille Trail features a stainless-steel cable guide and informational placards Architecture firm Sasaki designed both with help from staff at the nearby Perkins School for the Blind.

Before the Watertown Riverfront Park and Braille Trail opened in July, the only pathway along the Boston suburb’s stretch of the Charles River was a thin line of dilapi­dated asphalt. “You had trouble riding a bike there, let alone getting a wheel­chair down to the shore,” says Travis Mazerall, a senior associate at architecture firm Sasaki, which created the new 2.8-mile public space. But along with installing wide stabilized-aggregate paths and removing most of the invasive vegetation, the firm added features for persons with visual disabilities, including those who attend the nearby Perkins School for the Blind.

Chief among these amenities is a stainless-steel cable guide threaded with three types of indicator beads. The guide leads users along a quarter-mile trail with 10 stations, each highlighting local history and nature. Images of wildlife are engraved on the riverfront boulders, allowing both sighted and visually challenged visitors to learn more about the area. A bevy of fragrant native plants appeal to the sense of smell, while a marimba bench that passersby can play or sit on offers musical sounds and rest.

Perkins faculty and administrators participated in the trail’s design process, refining cable and signage heights along with proofreading the braille placards. The school is also stewarding the park’s continued maintenance. A second, 5-acre phase adjacent to the existing parcel is on the boards as well.