With its trio of inward-sloping tiers, the Smithsonian National Museum of African American History and Culture (NMAAHC) cuts a striking profile on the National Mall. Yet look closer at the 409,000-square-foot building, designed by Freelon Adjaye Bond/SmithGroup, and you’ll discover that the seemingly monolithic tiers—which the team refers to as a corona—are actually composed of thousands of custom-designed filigreed panels.

Shiny bronze panels had been the architects’ first choice, but the material proved too heavy for the structure’s exterior armature. So the team turned to Portland, Oregon’s Dura Industries, an applicator of architectural coatings, to replicate a glowing amber hue on lightweight aluminum.

This was no easy feat. Cast aluminum is “a rough, porous material,” says Dura president and CEO Del Stephens, and to make it reflective, “it has to be really smooth.” The company asked longtime partner Valspar Corp., based in Salem, New Hampshire, to help determine the best coating and process. After almost 18 months of color-mixing and application tests, the team arrived at a solution for the 3,600 panels: They spray-painted each 4-by-5-foot span by hand with five layers of Valspar’s Fluropon exterior coating—gray primer, green primer, black, African Sunrise, and clear coat with 3 percent red—with each layer baked before the next was applied. That approach required another year-plus of effort.

In both its scope and complexity, the proj­ect was an outlier for Dura and Valspar. But as the near-universal accolades for the NMAAHC design have attested, exceptional mea­sures often yield exceptional results. 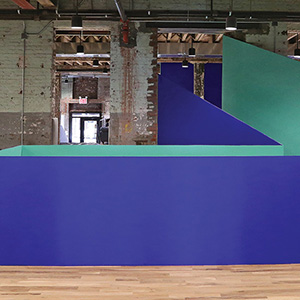 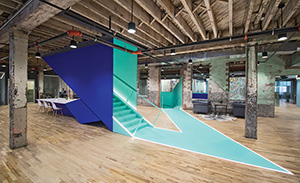 Leeser Architecture used a pair of bold hues to accentuate the geom­etry of two stair­cases the firm built in a Brook­­­lyn coworking space.

Leeser Architecture’s conversion of a three-story factory into the Brooklyn outpost of Coworkrs, a small chain of coworking spaces, was largely an exercise in restraint: The firm’s designers exposed the structure’s original brick walls and wooden rafters, specified minimalist lighting, and opted for movable white furniture. But to accent the new interior stairs—two enclosed flights that cut through the space like 3-D lightning bolts—it chose a deep indigo that nods to both Internet browsers and Yves Klein’s signature hue.

To achieve the intense shade, which is featured on the stairs’ outer walls, the team turned to KT Color, a small Swiss company that creates rich hues “you just can’t find with the brand names,” according to Leeser project manager Christian Lehmkuhl. For the interior of the stairs, the firm chose a bright teal from PPG Paints. Together the colors heighten the passageways’ geometries while minimizing their depth, giving them the appearance of flat digital drawings. The effect is a sharp contrast to the warmth of the structure’s rustic interior.

Leeser had originally specified hot pink for the stairs’ exterior. But the client didn’t like it, so the firm proposed the current combination. “Everybody can agree on blue,” Lehmkuhl explains. Mood indigo, indeed. —BA

Urbanized Surveys Global Cities, in All Their Squalor and Glory