Sidebar: A Wall that Rocks

Although only four stories tall, Albina Yard, a spec office building, stands out among its one- and two-story neighbors in the scrappy residential and commercial district in north Portland, Oregon. Looking up from the street through the horizontal bands of the glass facade, the ceilings of each level—planes of warm Douglas fir—are visible. These elements are not just finish material but the building’s exposed floor plate. Designed by Portland’s LEVER Architecture, Albina Yard, completed in 2016, is one of a handful of buildings in the U.S. constructed using a mass-timber structural system.

The divide between the new office building and its grittier context is bridged by the architect’s use of understated formal moves and a humble material palette. The scale of the street elevation is modulated and delineated in a subtle dance of cantilevers. The second story projects straight out to form a shallow protected zone over the storefront at the ground-floor retail space. The facades of the third and fourth floors twist a few degrees off the grid in opposite directions. The effect is like a stack of books slightly askew. Dark corrugated-metal siding, which clads the side walls and other opaque parts of the building, complements the nearly complete two-story office annex (also designed by LEVER) made of shipping containers and located in the rear courtyard of the L-shaped lot.

Although timber-framed construction has been around for thousands of years, mass timber is a more contemporary spinoff. Instead of solid wood beams and columns made from large trees, mass-timber frames incorporate engineered wood products such as cross-laminated timber (CLT), laminated veneer lumber (LVL), and nail laminated timber (NLT). Such components bind together small wood elements to form strong structural units.

Above its concrete foundation, Albina Yard has an all-wood structure. The architects designed a grid of glue-laminated (glulam) columns and beams with CLT panels acting as floor plates. Used for floor structures, walls, and even elevator cores, CLT panels are made up of three or more layers of dimensional lumber bonded with structural adhesives. Since the layers are stacked in alternating orientations, the panels are strong and lightweight and are able to span in two directions, in a manner similar to that of a two-way concrete slab. The bonded cross-lamination makes CLTs dimensionally stable, preventing the significant shrink and swell inherent in many wood products.

The approach has been used in Europe for a couple of decades and is spreading rapidly in Canada and the U.S. This momentum has spawned an informal competition, pushing mass-timber buildings to new heights from mid-rise to high-rise construction. The current record holder is the 160-foot-tall, 14-story Treet residential building in Bergen, Norway.

According to Thomas Robinson, LEVER’s founder, the firm decided to use this type of construction because of the client’s interest in sustainable strategies and regionally sourced materials. Designing with locally grown and fabricated elements saves energy and transportation costs.

Robinson also sees projects like Albina Yard as a means to help reinvigorate Oregon’s depressed timber industry. “We can connect the explosive growth in our cities to rural economic development,” he says. The timber industry in the Pacific Northwest has never fully recovered from the recession in the 1980s and subsequent forestry regulations that curtailed the supply of large trees for construction.

CLT and the other engineered-wood products used in mass-timber structures rely on smaller diameter and potentially more sustainable second-growth trees, says Professor Thomas Maness, dean of the forestry department at Oregon State University. He adds that mass-timber products can generate an array of highly skilled jobs, from those on the forest floor to others in high-tech fabrication facilities.

Because Albina Yard’s glulam components and CLTs were prefabricated off-site in a controlled environment and because of their inherent dimensional stability, LEVER designed the building to an unusually tight tolerance of ⅛ inch. But the team wisely decided to construct the ground-floor structure before fabricating the rest of the frame in order to work out any glitches that might arise in the system. They found that they hadn’t accounted for the full depth of the fillet welds on column-to-beam connectors. “A little grinding to fit the beams was the only on-site correction we had to do,” says Robinson. The CNC software that cut the slots in the glulam elements for the connectors was adjusted to account for the welds, and the rest of the structure went up without a hitch.

Not only was the building erected easily, but it also went up quickly. Each of the 4,000-square- foot CLT floor decks was installed in about four hours. With conventional methods, each level would have required up to a week, Robinson estimates. The construction method offered other benefits, including a quiet construction site and “just-in-time” material delivery, with the components arriving at the site immediately before they were ready to be installed. Such an approach is especially appropriate for projects in dense urban areas, where on-site storage and staging space is at a premium.

Although LEVER is currently working on a project that will rely on CLT for its structural core in addition to its superstructure, Albina Yard has a more conventional wood-frame core sheathed in plywood with hold-downs at each level. The core, along with the specially fabricated column- to-beam connectors, helps the building comply with seismic requirements. Fabricated in a local shop, the steel components are screwed to the columns but support the beams only with friction connections. They are embedded in the beam-ends with a saddle for the primary structure and a pin connection for the joist beams. The result is a seamless grid of glulam beams supported by hefty, square glulam columns—without a fastener in sight.

Mass timber is substantially lighter than concrete or steel-frame construction. In addition to smaller gravity loads, a lighter structure can reduce lateral loads, which in turn further decreases the demands on the foundation, according to Eric McDonnell, a structural engineer for the project with KPFF in Portland. He adds that, while smaller loads can allow smaller foundations, in some cases they can also preclude the need for expensive piles or even allow for a taller structure. For Albina Yard, the foundation loads are between 40 percent to 60 percent less than if the superstructure had been steel or concrete, estimates McDonnell.

Mass timber has several ecological advantages over typical construction methods. The earth’s forests make up an enormous carbon sink that absorbs about 30 percent of global carbon dioxide emissions. When dry, one half of wood’s weight is made up of carbon, which it retains until it is burned or decomposes. According to European studies, one cubic meter of structural lumber can store about one metric ton of CO2. Also, mass timber is comprised of large-scale components that can be more easily disassembled and reused than those of many concrete and steel structures. Even standard stick framing, because of multiple fasteners and adhesives, is difficult to deconstruct intact.

When compared to a concrete structure, mass timber scores better across the board in terms of its impact on the environment. A 2012 study by the University of British Columbia’s Sustainable Building Science Program found that producing mass-timber structures generates less air pollution, less toxic waste, requires less water, and embodies 18 percent less energy from nonrenewable sources than a concrete building. Overall, concrete has two-and-a-half times the potential impact for global warming than mass timber, the study asserts.

Despite these sustainable attributes and the aesthetic warmth of mass-timber construction, Robinson hadn’t planned to build out the top floor for his firm. However, during construction, when several members of LEVER stood on the third-floor deck, they were surprised to see an unobstructed view of Mount Hood and decided it was an opportunity they couldn’t pass up. “This is an architectural practice,” Robinson says with a chuckle, “and it’s good to practice on your own space before designing for other people.”

A Wall that Rocks

In many ways, Albina Yard has served as a test bed for a much more ambitious LEVER Architecture project: the 12-story mixed-use Framework building in downtown Portland, Oregon. It was one of two projects that split the $3 million U.S. Tall Wood Building Prize, sponsored by the U.S. Department of Agriculture, the Softwood Lumber Board, and the Binational Softwood Lumber Council. At approximately 145 feet tall, Framework is expected to become the tallest mass-timber building in the U.S.

High-rise buildings typically rely on the shear walls that define a circulation core to stiffen the structure. In an earthquake or in high winds, the floor diaphragms transfer the lateral forces to the shear walls that resist and absorb movement. But Framework will have an innovative core system: a so-called “rocking wall” made up of vertical CLT panels.

Instead of trying to prevent the panels from moving in a seismic event, the designers have placed post-tensioned cables down the center of the wall to allow the ends of the panels to rock up and then pull the wall back into position to “self center.” According to Eric McDonnell, a structural engineer with KPFF in Portland, “With most traditional systems, like a concrete shear wall, the building won’t necessarily come back to level once the shaking stops.” LEVER principal Thomas Robinson adds that the team performed extensive testing with Oregon and Portland state universities to develop the resilient low-damage system.

Between the shear walls and the adjacent columns, the design team used a U-shaped flexural plate (UFP) that allows differential movement and absorbs energy. If the UFPs are damaged in an earthquake, they act like seismic “fuses” that can be replaced fairly easily, potentially saving costly repairs.

Although wood is very combustible on its surface, once a layer of char forms, it insulates and slows the burning process, according to McDonnell. Framework’s components—such as beams, columns, and floor plates—have been oversized to account for the extra depth of char while maintaining enough structural integrity to achieve the two-hour rating.

According to ARUP fire-safety engineer David Barber, a major challenge was designing and testing the connectors, which needed to work aesthetically and structurally while standing up to the two-hour fire-rating requirement. Similar to what they did for the Albina Yard connectors, the team designed brackets that are totally encased by the wood structure, which makes them more fire-resistant.

The project has passed its life-safety tests and is currently in the final phase of permitting. Ground breaking is slated for this fall. 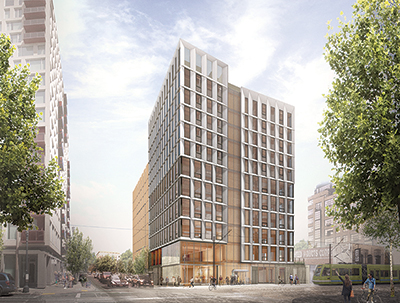 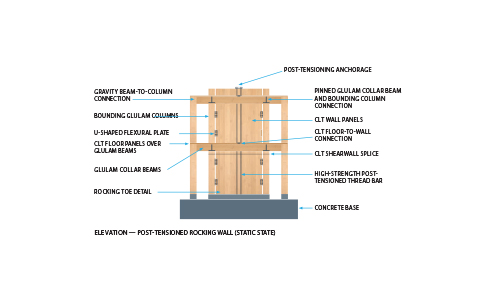 The 12-story, 145-foot-tall Framework tower, expected to be the tallest mass-timber building in the U.S. once complete, will have a “rocking wall” core designed to self-center after a seismic event.

Michael Cockram is a freelance writer and director of Bowerbird Design in Fayetteville, Arkansas.

Multifamily Architecture in Context: Structure and Strategy by Design