For basketball fans, the excitement of a game comes down to watching the players take their shots at the hoop. But in HOOPS, a new exhibition at the National Building Museum, photographer Bill Bamberger is the one taking the shot—sans players.

Featuring 75 large-format prints, HOOPS hones in on the informal arrangements of basketball venues around the world. By cutting out the players, Bamberger removes the idea of a moment frozen in time, to instead tell the broader story of place and environment, captured in vivid color.

The absence of people is a notable departure for Bamberger, whose work prior to this series includes portraits from the Rust Belt in the mid-1980s and post-genocide Rwanda.

In the tradition of the German photographers Hilla and Bernd Becher—a mid-twentieth-century duo whose oeuvre included multiple series of tightly cropped images of water towers, coal chutes, and other industrial relics—Bamberger narrows his focus to the ubiquitous basketball backboard. But unlike the Bechers, Bamberger widens his frame to include the surrounding environments of his subjects. Visual clues such as construction materials, condition, or landscape (Douglas fir versus camel thorn trees, for instance), suggest context and geography, offering the viewer clues about the unseen community each court serves. In perhaps cheeky allusion to the Bechers, the exhibition includes an image of a basketball hoop attached to a grain silo.

Over the last 15 years, Bamberger has amassed some 22,000 images of basketball courts across more than a dozen countries, and he has become a relative expert at sensing where to find them. At a recent preview of the exhibition, the photographer recalled driving down a highway in eastern Tennessee: “I’ve gotten to the point where, from a long distance, I can spot one of these courts,” he said, “so I hit the brakes, walked down into the woods to this basketball court and school bus. And I could see from the growth that it had been abandoned for about three months. Someone had taken a scrap piece of plywood and made a hoop from one of the hubcaps of the bus.”

Some hoops he has shot are in immaculate condition, such as a public court in Maine or a store-bought hoop setup in Pennsylvania. Others follow the DIY ethos, with repurposed signage becoming the backboards. In Central America especially, the gaming apparatus is a dual-purpose configuration, with basketball hoop mounted at the center point of a soccer goal’s crossbar. 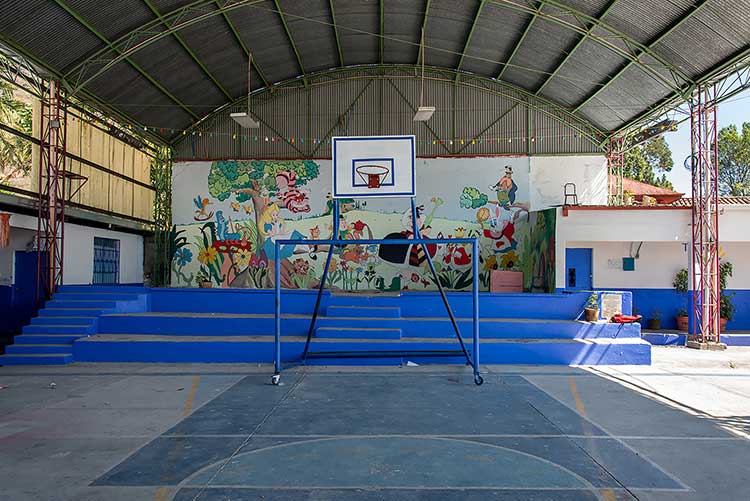 Exhibition curator Chrysanthe Broikos, who collaborated with Bamberger on a previous NBM exhibition in 2004, called Stories of Home, explains that in the current exhibition, the personal nature of each hoop—whether it’s located in a private yard, a public park, or a school campus—derives as much from its construction as its setting. “The real driver behind [selection] was to show as much diversity as possible in terms of where they’re from and their perspective,” she said. “These things just pop up everywhere, in the most unexpected places sometimes.”

Even without people in the photos, there’s a sense of playfulness to the exhibition, thanks to design that capitalizes on the architecture of the National Building Museum: its groin vaults, the arches of which have been painted in hues drawn from some of the prints, produce an audible echo at their centers that recall the unmistakable sound of an indoor basketball court. Seating takes the form of gymnasium bleachers, and curving lines painted on the floor, recalling three-point lines on the court, meander through the gallery.

As a photographer and occasional hoopster, Bamberger maintains a sense of humor about his work. Basketball remains a universal icebreaker, and he would often pick up a quick game with whoever was on the court before setting up his shots. “My style of play has evolved now that I’ve aged a little. But when I play, I shoot from the outside,” he told RECORD. And about his photography, he added, “75 out of 22,000: Can you imagine that as a shooting percentage?”

The HOOPS exhibition is on view at the National Building Museum through January 5, 2020.