The Shed by Diller Scofidio + Renfro with Rockwell Group

For years, Manhattanites have suffered Brooklyn envy as the Brooklyn Academy of Music (BAM) and other institutions based in that borough have taken the baton of avant-gardism from Manhattan and run with it at uncatchable speeds. Manhattan was stuck. Many arts lovers hankered to be on the far side of the East River, living in other zip codes.

Now New York architecture firm Diller Scofidio + Renfro (DS+R), in collaboration with Rockwell Group, has built a cure. Early this month, the Shed, a huge eight-level cultural venue in Hudson Yards, Manhattan’s new development on the far west side, opened to the jazzy syncopations of marching bands and drummers, led by Howard University’s Showtime band. Sousaphones swayed as the musicians snaked through the standing crowds in a 2,000-capacity mosh pit called the McCourt that sits within the extended retractable shell of the Shed—a voluminous, 115-foot high adaptable space with a steel armature resembling the skeletal bones of a “gigantosaurus.” Like the top of a convertible, the entire ballooning volume had been moved out—rolling on eight huge steel bogie wheels, 6 feet in diameter—from the structural-steel, glass, and concrete-base building of the Shed, which backs into a new 88-story residential tower, also designed by DS+R.

After the rousing opening, the concert continued on a temporary stage as musicians performed “The Soundtrack of America,” the first of a five-evening program of African American musical history produced by the British artist and filmmaker Steve McQueen, at the invitation of the Shed’s artistic director and CEO, Alex Poots. 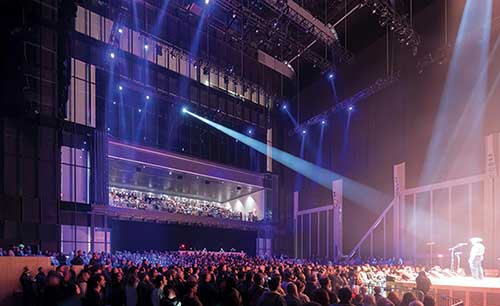 While that series unfolded, other visual and performing works opened elsewhere in the Shed, showing off just how nimble the architecture is. A stack of four adaptable loftlike spaces, each about 12,500 square feet, make up the base building (which cleverly poaches on the infrastructure of its host, the residential tower, doubling up on plumbing, elevators, and fire stairs, and gaining back-of-house areas and offices). One major debut was a synesthetic program, combining a digitally animated mural by Gerhard Richter and music by Steve Reich composed to the same algorithms, in the 19-foot-high gallery on level two. Artist Trisha Donnelly’s enigmatic untitled installation commandeered level four, while in the Griffin Theater on level six—23 feet high and temporarily configured with a proscenium stage and raked seating—Renée Fleming sang in an original performance piece, Norma Jeane Baker of Troy, written by the poet Anne Carson. Fleming’s costar, Ben Whishaw, transformed himself into Marilyn Monroe in a play that ended, as it must, sadly.

The performances and art pieces—original, ambitious, daring works that tested the $475 million building for flexibility—provide a foretaste of the scope of Poots’s goal to present newly commissioned works that cross disciplines for diverse audiences, whose tastes may range from street art to the intellectually occult. The Shed is the platter on which art that is not yet imagined will be served; it’s a garage for creative start-ups. As Dan Doctoroff—deputy mayor in the Bloomberg administration who helped initiate the creation of Hudson Yards and is now board chairman of the Shed—explained, the institution got its name because it is “an open shelter for tools.”

Sheathed in inflatable ETFE, the Teflon-like material that looks like bubble wrap, the Shed has a charismatic urban presence, especially at night, when it glows like a Japanese lantern along the Hudson Yards’ southern edge, adjacent to the High Line. The main south entrance is at street level, below the High Line, while the north entrance is at the higher level off Hudson Yards’ plaza.

But the Shed is not so much an object as a performance. Leaving its position against the indented side of DS+R’s residential tower, the shell rides on tracks with elephantine slowness and grace, and, fully telescoped out, at 17,000 square feet, it doubles the footprint of the base building. Two rack-and-pinion systems on the roof, each with six 15-horsepower motors, drive the movement with a combined 180 horsepower (compared to a 134-horsepower Toyota Prius).

With state-of-the-art industrial parts taken from gantries and other portside structures, the design makes an unmistakable contextual reference to the wharves that once lined the Hudson River waterfront, just a block west. “We used a lot of parts from the industrial-crane industry, which are reliable, time-tested, and maintainable,” says DS+R founding partner Elizabeth Diller.

The design belongs as well to the long tradition of the English industrial shed. That inspired James Stirling and High Tech architects Norman Foster and Richard Rogers, who seem to pluck the parts of their buildings off the shelf. In reality, as in those buildings, many “standardized” parts were actually custom-designed, such as the Shed’s four-story street-side glass facade. The components here were expressly made not to look precious. Fittings are not chromed as in many High Tech statements but deliberately calibrated simply to look serviceable and functional. Neutral, charcoal-gray walls in the escalator corridors look standardized but are actually custom-fabricated modular wall panels. These bespoke components work well with off-the-shelf ones such as a baffled ceiling system, which allows easy access to hidden mechanical systems. The floor is basic industrial-strength polished concrete, and the gallery walls are standard gypsum, backed by plywood for secure art installations.

Apart from the otherworldly ETFE shell, the architects bring no attention to the building’s form or surface: it remains at all times a rather Calvinist, no-frills support structure for other people’s creativity. To find moments of “design” within the general sobriety of the strictly orthogonal, mostly gray base building, you have to go into the restrooms, where mini-mosaics are arrayed in an essay of grays, with white tiles bubbling toward the ceiling.

Yet the assiduously neutral design is somehow poetic. It is not the poetry of form but the poetry of the ballet mécanique. Everything moves, and not just the gigantosaurus. Glass walls at the front of the level-four gallery floor, which overlooks the great McCourt space, fold back accordion style to allow extra bleacher seating for up to 300 people to be part of the vast space, while the gallery on the same level as the McCourt can be opened to expand the enormous floor to hold as many as 3,000 people. The side walls of the McCourt rise and fall like a guillotine to open the interior to the surrounding plaza. Shades drop, also guillotine style, to block light and sound. Elements of the flexible light grid overhead can descend. The McCourt is effectively a soaring fly tower that allows the whole space to perform as a stage. The point of the dance, however, is that the building adapts to changing programs. The architects have created what Doctoroff correctly calls a “Swiss Army knife” that can perform whatever task artists need and want. The building is a servant structure without an architectural ego.

About 11 years ago, the idea for the Shed began to germinate as Diller and David Rockwell pondered a satellite map of the future Hudson Yards development, to be built on a deck over the vast rail yards at the western edge of Manhattan. They stared at a spot marked with a question mark that the city had designated for a cultural venue. Mayor Michael Bloomberg, who donated city land and $75 million in city funds (and later gave $75 million of his own; the building has been named in his honor) stipulated only that—whatever this arts facility would be—it should not duplicate anything the city already had.

Diller and Rockwell didn’t really have a clue. Nor did anyone else. Their basic idea of stacked lofts—big, open, flexible, experimental spaces—evolved slowly, but from a starting point: their shared history in Manhattan. Both Rockwell and Diller had unique New York backgrounds. Rockwell says that when he came to the city, he was not fascinated by the iconic towers of the skyline but by the busy, scruffy, changing, infinitely human New York streetscape of storefronts. It was a New York of energy and change, and he resolved to design buildings that would cultivate life.

Diller came of age intellectually and artistically in the city’s Downtown loft culture in the 1970s, as artists and architects staged performances and created off-the-wall artworks and happenings in the informality of big, raw found spaces that opened possibilities and ignited the imagination. Before this latest project, she was part of the team that designed the High Line, the elevated rail line that can be compared to a linear outdoor urban loft. Now, at its northern end, it swings by the south side of the Shed. 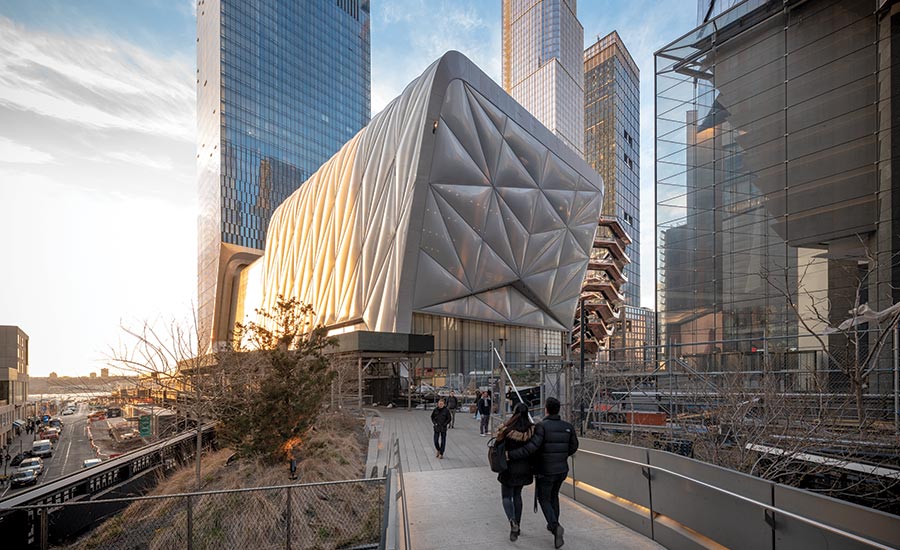 The Shed, as seen from the High Line, photo © Iwan Baan

Both Diller and Rockwell also cite the famous, unbuilt Fun Palace, by Cedric Price, a cavernous hall designed in 1959–61 as a barebones steel apparatus outfitted with traveling gantry cranes that allowed changing configurations to support changing activities. Its kit of parts included prefabricated modular floors, walls, and ceilings—much like its echo, the Shed. (The lobby’s bar and restaurant is called Cedric’s.)

In the context of a Manhattan increasingly Houstonized by tall, impersonal towers, deadened at the street by empty lobbies and banks, the architects fused their backgrounds and interests to create the biggest loft of them all, where artists can again experiment with impunity—and without the same commercial pressures that drive and restrict galleries and theaters (the Shed’s operating budget of about $50 million a year will come largely from donors’ gifts and from revenue, at least at first). Poots, the founding director of the wildly successful Manchester International Festival in the UK, is running an institution that will generate rather than import “content.” And he is directing an institution that encourages risk, he says, to the point of tolerating failure.

Many New Yorkers thought that kind of inventive spirit had long since decamped to Brooklyn. With Poots as director propelling the Shed’s original programming, the architects have created an armature and trampoline for a calisthenics of creativity that invites the city’s artistic soul back, enhanced by Manhattan architectural cool.