Starting May 16, the masses of tourists huddled on the decks of Statue Cruise boats, yearning to take photos of New York landmarks, will have another reason to visit Liberty Island—and a new vantage point for their Lower Manhattan skyline selfies.

Two and a half years after breaking ground, the new Statue of Liberty Museum is now complete. Conceived by FXCollaborative, with exhibition design by ESI Design, the 26,000-square-foot building—which contains permanent and rotating displays of statue-related artifacts, a three-room immersive theater, and Lady Liberty’s original 1886 torch—blends into the natural landscape of the island while complementing the formal mall setting of the park that surrounds the neoclassical sculpture.

The new facility enriches the Liberty Island visitor’s experience, which has been a frustrating one for many: with the most popular (and easiest to obtain) ticket, sight-seers are only able to walk the grounds, not ascend to the crown nor enter the old museum (which will be converted into offices for the National Park Service) in the podium of the statue—activities for which tickets are limited. Now, anyone with a ferry ticket to the island can take in the exhibitions and view the original torch, even if they can’t climb to the top of the statue.

The project’s origins go back to 2012, when FXCollaborative interviewed with the Statue of Liberty-Ellis Island Foundation and presented the initial concept design. Over time, the scheme evolved as new factors came into play. For example, after Hurricane Sandy hit New York, the architects raised the museum to 19 feet above sea level, accounting for 500-year-flood water levels. And building on an island always comes with its challenges; shipping materials meant that “a $1-million dock showed up on our budget sheet,” FXCollaborative partner and project designer Nicholas Garrison told RECORD. (He added that the temporary structure has remained in place longer than expected, as fish have made it their spawning grounds.)

The New York-based firm also navigated a lengthy approvals and design process. Though the site is under federal jurisdiction, the team conferred with historic preservation organizations in New York and New Jersey, as well as with the Stockbridge-Munsee Band of Mohican Indians and the Delaware Tribe of Indians, which have heritage sites on the land.

Embedded into a waterfront-facing berm, the glass and concrete building looks out at the back of the statue and the New York City skyline beyond. The museum’s prism-like form is bisected by a wide stone stair, leading to a prow-like viewing platform that sits adjacent to a green roof of native grasses. (Both the stair and plaza are made of Stony Creek granite, also used in the Richard Morris Hunt–designed statue pedestal.) Unifying the meadow above and landscape below, a triangular section of the green roof folds down toward the ground. Between the berm and the sharply angled forms, the structure gives the appearance of pushing up from the earth. “It’s as if a tectonic shift created the museum,” says Garrison. 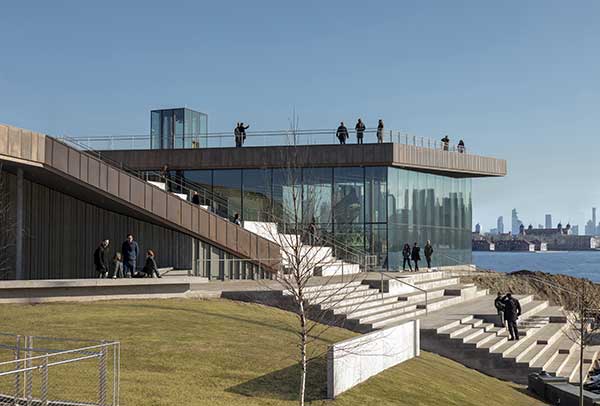 Subtle material choices allow the building’s context and content to shine. Glazing covers much of the exterior, and given that the site is located in a migratory bird route, the architects added a subtle dot frit. Precast panels of dark concrete frame the sides of the edifice, and a heavy gauge copper fascia edges the roof. Garrison hopes the material is slow to acquire a green patina; “We don’t actually want to compete with her,” he says, nodding to Lady Liberty.

Upon entering the building, visitors first encounter the standing-room theater, where a 10-minute film about the statue’s history is projected on oversized curved screens. The rounded insertion is loosely enclosed by undulating walls of cherry slats, meant to improve acoustics in the museum’s 15,500-square-foot interior. In the main exhibition space, artifacts—including a full-scale copper model of the statue’s foot—and interactive media stations illustrate French sculptor Frédéric-Auguste Bartholdi’s design and fabrication process, and explore the larger meaning of “liberty.” With the experience, ESI president and principal designer Edwin Schlossberg explains that his firm aimed to make visitors realize their individual responsibility defining and protecting liberty. “There should be as many definitions of what liberty is as there are people,” he says.

The museum visit culminates in a bright, spare gallery with expansive, floor-to-ceiling windows, where Lady Liberty’s original torch—removed in 1984 due to water damage and replaced with an exact replica two years later—stands against a backdrop of the statue, the water, and the Lower Manhattan skyline. “We really fought for this,” says Garrison, explaining that moving the 3,600-pound torch from its location inside the statue’s pedestal was a significant feat of engineering. To him, the effort was worth it. “She’s in daylight for the first time in more than 30 years.”

Beyond showcasing tangible objects of the Statue of Liberty’s history, the $100-million project offers visitors the opportunity to consider on a new level the meaning behind this iconic symbol, and to engage deeply with their understanding of one of this country’s founding concepts.