Well before 8 a.m. on Wednesday, November 20, thousands of Greenbuild Expo attendees began assembling for the gathering’s most highly anticipated keynote: a conversation with President Barack Obama. While not the first time a former president has spoken at the U.S. Green Building Council’s (USGBC) annual conference (Bill Clinton delivered the opening plenary in 2007 and 2017), excitement was high, with the line to enter the hall snaking through multiple levels of the Georgia World Congress Center.

Speaking with USGBC president and CEO Mahesh Ramanujam, the 44th president of the United States shared his thoughts on the most critical issues facing society today and reflected on life since leaving the White House.

Ramanujam began by asking Obama about his post-presidency experience. His answer—a quick, enthusiastic “It’s great!”—drew laughs from the crowd. “I’m getting more sleep, Michelle and I have more time together, which is fantastic… Having a little time to breathe, read, think as opposed to react, that is something we've looked forward to. Michelle enjoys it even more, and when she's happy, things go well.” While he said they’re glad to be done with “the fuss—the trumpets, and the salutes and the pomp and the circumstance,” he admitted to occasionally missing Air Force One. “That plane’s got a shower. It's nice.” 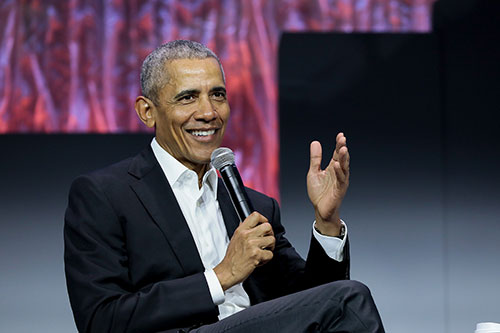 Conversation quickly turned to the urgent challenges facing leaders, individuals, and society at large. Obama identified two connected concerns as the most critical: climate change and the economy. “Climate change is an existential issue,” he said. Unlike having bad tax policy for four or eight years, which can be corrected with time, “This is one of those where you can be too late. So, I know of no issue that is more urgent than that.”

“I would combine it, though, with the challenge of how we construct a globalized capitalist economy that actually provides everyone and is not continually accelerating inequality,” he continued. “The reason I say those two things are connected is that it is harder to figure out how we solve sustainability issues and deal with climate change if you also have huge gaps in wealth and opportunity and education. And so, we're not going to solve the former if we're not also attending to the latter.”

Pointing to California’s housing crisis as an example, the former president noted how in certain metropolitan areas of the state, “building codes are so onerous that it makes construction of affordable housing almost impossible,” which, in turn, can foster a negative mentality toward sustainability among those most effected economically.

"As wealth gets more and more concentrated, and more and more energy is used up by the few, the many become resentful,” he said. “It undermines our sense of politics and a sense of community. It is hard for us then to mobilize the body politic around taking collective action.”

He called this fact a “legitimate criticism [of] those of us who consider ourselves progressive.” At the local level, he explained, “We're not taking into account these specific costs, and who's bearing them… If we want to think about sustainability, we have to do it in a way that also is thinking about affordability.”

A chronic problem of “do-gooders,” he said, is that “sometimes we like to tell people what they should think is important, rather than actually asking them what's important to you.” He shared the advice he has given to emerging community organizers: “Your first job is not to talk, but to listen.”

With that in mind, Obama laid out a framework for how one might approach implementing sustainability strategies in a neighborhood: “The first thing I want to do is just go around and talk to them and find out, how do people live? What are their concerns? What do they think about their homes, what do they think about their neighbors, what works, what doesn't? Because when you listen, it turns out that you get a sense of what people's priorities are, what their values are, what their worries are,” he said. “Then, figure out how to shape a sustainable agenda around those concerns.”

He likened the process to how architects deal with their clients, referring to the Obama Presidential Center currently being designed by Tod Williams and Billie Tsien. “I can tell you, since I'm now dealing with architects—and I've got wonderful architects—that part of what makes an architect really terrific is if they actually care about your opinion.”

Authentic concern for constituents was just one of the leadership strategies Obama shared at Greenbuild. He emphasized the importance of convening a diverse team, noting that diversity should be more than just symbolic. “The goal is to have people around the table who can bring to bear a set of different perspectives and correct for each other's blind spots—including yours.” He also referenced the so-called “No Jerk Rule” deployed during his administration: “I had the luxury as president of trying to not have jerks around who were trying to undermine their coworkers or other team members, or who were obsessed with taking credit rather than actually getting the job done.”

Obama ended with comments on how individuals, leaders, communities, and countries should strive to align their stated beliefs with the things they do. “If we say our children and the next generation are the most important thing, then we have to act in accordance with those values,” he explained. “Presumably, that should be reflected in your policies and the people that you support.”

“Currently, there’s more divergence [between values and actions] than I would like,” he said. “I think it’s very important in our personal lives, but also collectively, to get those back into alignment, and each of us can do our part.” Non-profits, the private sector, and governments all have roles to play as well, he said, in developing “a framework around which we can make better decisions. If we do, then I'm optimistic about our ability to solve these problems that we've created for ourselves.” 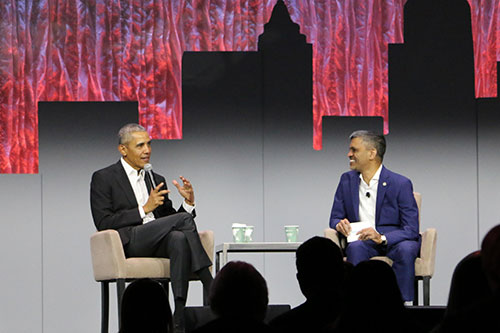