This website requires certain cookies to work and uses other cookies to help you have the best experience. By visiting this website, certain cookies have already been set, which you may delete and block. By closing this message or continuing to use our site, you agree to the use of cookies. Visit our updated privacy and cookie policy to learn more.
Home » NOI Techpark by Claudio Lucchin & Architetti Associati and Chapman Taylor
ProjectsBuildings by TypeReuse and RenovationWorkplace Design

Situated just about as far north in Italy as you can go, Bolzano, the capital of the country’s autonomous South Tyrol province, has its charm, with a Medieval center composed of winding arcaded streets and an impressive cathedral. In contrast is a nearby industrial zone, which, in its sprawling grittiness, offers a foil to the Alpine peaks that embrace the city. The district has its own history as a relic of the Fascist period. When Mussolini was trying to Italianize South Tyrol—previously part of the Austro-Hungarian Empire and annexed by Italy following World War I—he promoted industrialization here in the hope of outnumbering the German-speaking population with Italian immigrants.

The Montecatini aluminum factory (eventually to become Italy’s largest) was the first plant to open in Bolzano, in 1938, followed by numerous other heavy industries. However, declining production over the decades led to the plant (then Alumix) being largely decommissioned in the early 1990s, with the foundries demolished. The province purchased a 22-acre parcel of the 50-acre campus shortly after, prompting a ­master plan and a debate about the future use of the land and its structures. In 2004, the factory’s four vacant main buildings were listed as historic monuments. All designed in-house by the Montecatini company, they included two transformer plants (BZ1 and BZ2) as well as two small buildings that housed management, a caretaker’s quarters, and a canteen. In 2007, the provincial administration launched a competition to reimagine the property. Initially, the brief included a museum, but it was later amended to dedicate the whole program to a research and innovation center to encourage Bolzano’s evolution from an industrial hub to an enclave of high-tech. The result is a sophisticated new campus that preserves the understated facades and soaring interiors of the beautiful Rationalist architecture here while creating a highly sustainable modern workplace that continues the tradition of industry in Bolzano. 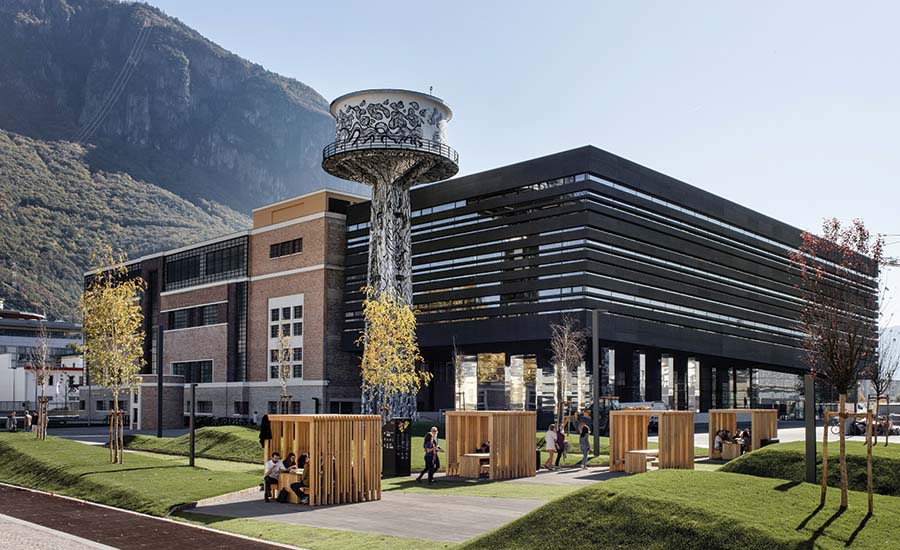 A concrete water tower was fancifully painted by Polish street artist Mariusz Waras in 2008. It once served the transformers and today holds water used for heating and cooling the buildings. Photo © Alessandra Chemollo, click to enlarge.

With their scheme, the winners of the 2007 competition, Bolzano architects Claudio Lucchin & Architetti Associati and the Milan office of Chapman Taylor, have reinvented the complex as NOI Techpark—NOI standing for “Nature of Innovation” and also South Tyrol dialect for “new” and the Italian word for “us.” As a research and innovation center, the campus brings together the Free University of Bozen-Bolzano with private business and research institutions (that focus on sustainability and food production) through a diverse collection of labs, workspaces, and meeting facilities that occupy BZ1 and BZ2 as well as a new building that links the two. Housing over 60 businesses and 600 researchers, the campus will eventually expand to include five additional new buildings. 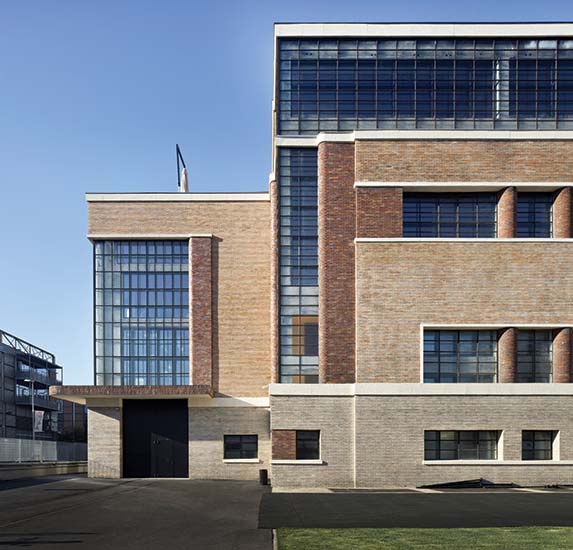 BZ1 is one of the old concrete-frame transformer buildings clad in clinker brick that now holds laboratories and offices. Photo © Alessandra Chemollo

A native of Bolzano, architect Claudio Lucchin has a personal connection to the project. “We all have had a relative or friend who worked in this factory, which is a piece of the history of this city,” he says. He was immediately captivated by the challenge of developing the complex as a workplace for a new generation, hoping to “redefine the idea of what a factory is while retaining the genius loci of the place.” Gian­franco Lizzul, the director of Chapman Taylor Milan, points out the importance of creating a scheme that would architecturally express the site’s new use. “The project combines contemporary Italian design with a wonderful piece of Bolzano’s industrial heritage,” he says. While the competition brief mandated retaining the exteriors of the concrete and clinker brick buildings, as well as related artifacts, such as a concrete water tower and reflecting pool, there was ample room for invention within and around the historic fabric.

Entering the complex, you pass between the two more domestically scaled mixed-use buildings—one of which Lucchin’s team has converted into a restaurant and café, the other of which has yet to be re­-purposed—into a broad plaza. Directly behind the prominent water tower is the new building, dubbed the Black Monolith in deference to Stanley Kubrick’s 2001: A Space Odyssey. Clad in dark gray aluminum foam (a nod to the site’s past life) with ribbon windows stretching across its north facade, and appearing to float atop polished-aluminum-clad columns, the structure (which tilts 2 degrees from front to back) strikes a mysterious—though sympathetic—pose between the two historic buildings. The main entry to the complex is tucked beneath the Black Monolith’s big overhang and leads into a series of casual meeting spaces and offices. Illuminated by a skylit courtyard at its center and generous glazing on its south end, the interiors are surprisingly bright and airy. 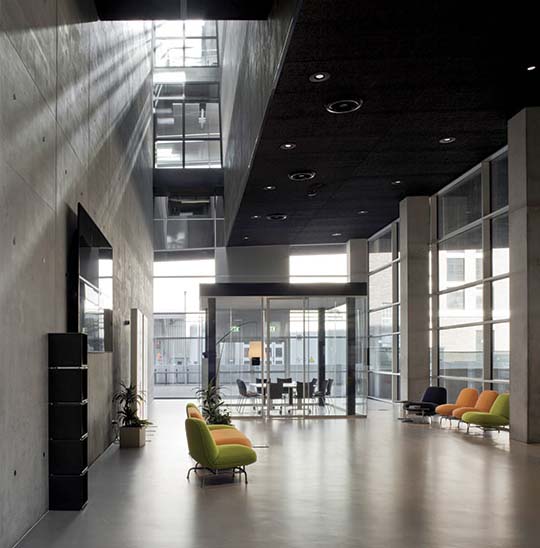 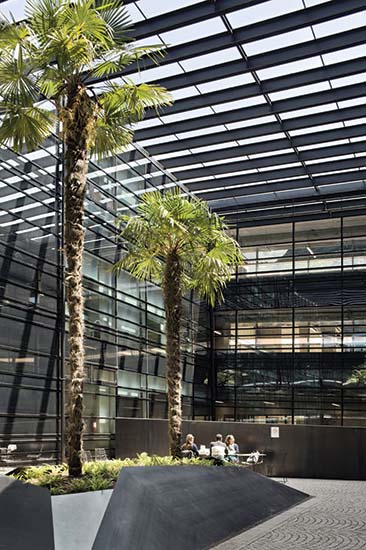 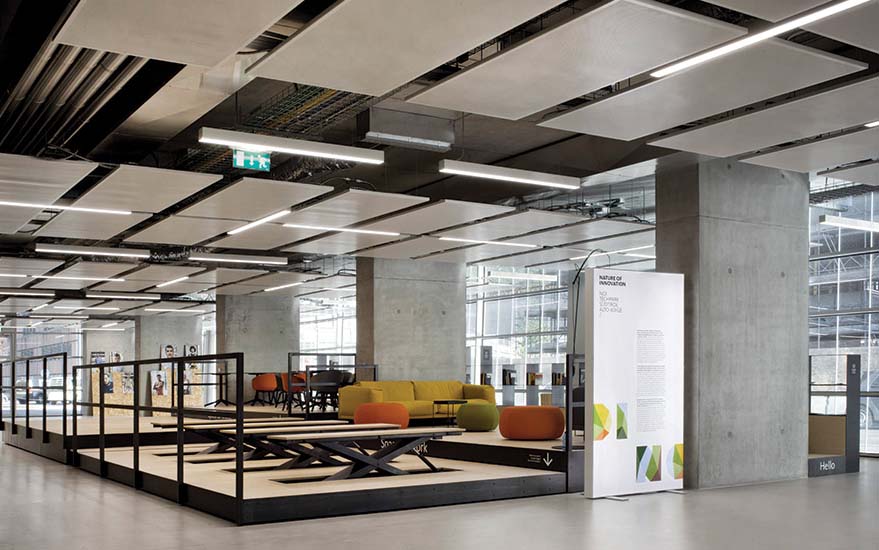 The new building has a variety of formal meeting and casual gathering spaces, some of which are open to the public. Photo © Alessandra Chemollo

The new building connects on its upper levels to BZ1 to the east, which has as its centerpiece a grand overhead-crane hall lined with laboratories, workshops, and offices for start-ups. BZ2, to the west, similarly retains its original central hall, which is now flanked by labs, offices, and facilities for the university and other institutions. To provide the large-scale specialized labs required here, the team excavated the ground-floor level 4½ feet and dug a north-facing courtyard to bring in daylight; on the main floor, they inserted lab spaces within the existing reinforced concrete structural grid. The interventions here, including the ground-up building, do not lean on historicism but, rather, read as distinctly new. Underscoring this, many interior insertions float within the spaces, detached from the walls and ceilings, such as BZ2’s raised platform-like media library as well as the stacked steel-and-glass incubator offices that the team installed within the original concrete frame of BZ1’s triple-height power-transformer room. In places, new elements are painted black to contrast with the original surfaces, which are left white. While the retention of original structure and elements throughout recalls the complex’s former use, it is the spatial preservation that captures the spirit most potently. Even when chopping up some of the cavernous rooms to provide offices and labs, the team, through its abundant use of glass and the creation of breathing spaces between old and new, has maintained the sublime cathedral-like quality of these interior volumes. 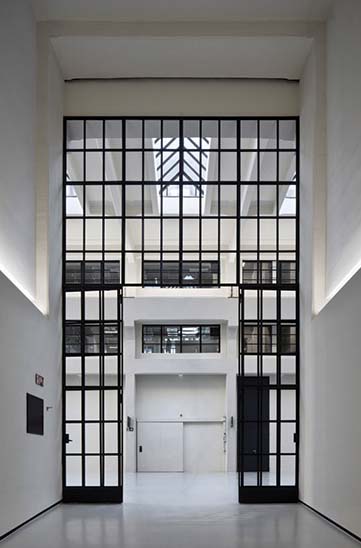 The BZ1 transformer building's original entry has been restored. 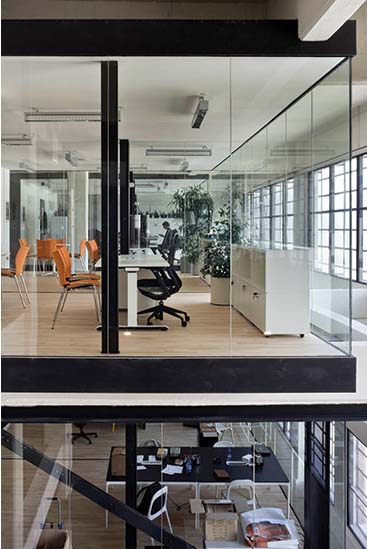 Steel-and-glass stacked incubator offices occupy another part of the building . 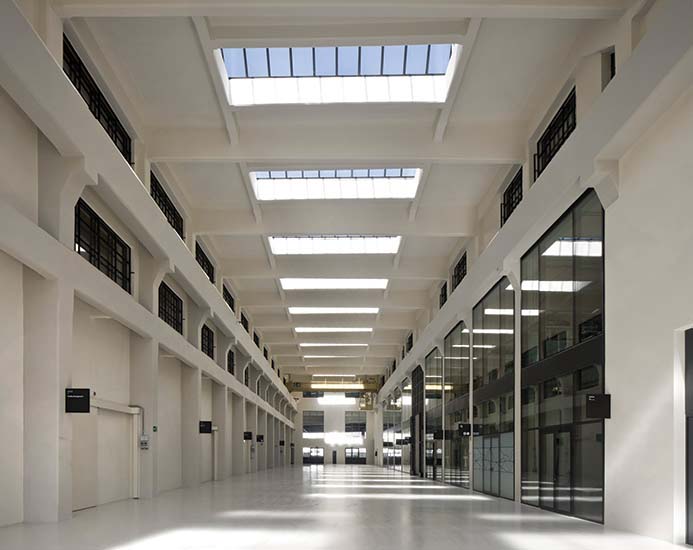 A grand overhead-crane hall is the centerpiece of the BZ1 transformer building. 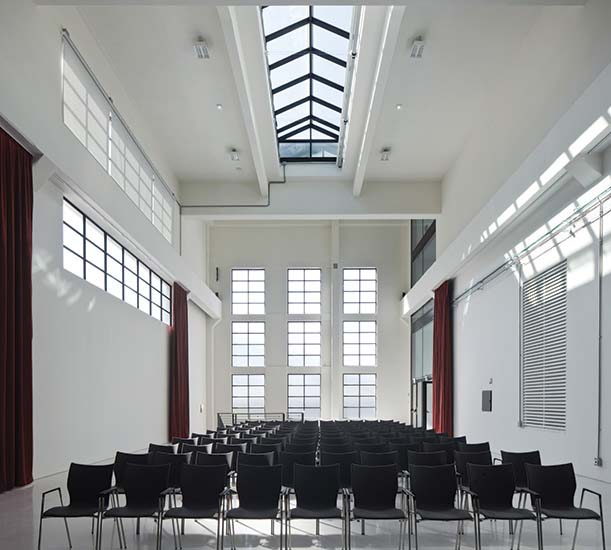 The original bones of the BZ2 transformer building are visible throughout, as in this event hall.

Complying with stringent local CasaClima sustainability practices, NOI Techpark has achieved an A rating, the highest possible, as well as LEED-ND for neighborhood development. And the Black Monolith is a nearly Zero Energy building (nZEB): besides recovering wastewater from the neighboring factory’s production process for heating and cooling, the building employs automated operable windows to extract heat at night during the summer months, requiring less air-conditioning during the day. Rooftop PVs meet about 70 percent of the Black Monolith’s electric needs, and plans are in place for future runoff recovery for landscape and green-roof irrigation. In addition to employing standard daylighting and recycling practices, NOI Techpark looks to employee transport: hydrogen buses service the complex, and surrounding bicycle paths have been expanded.

With the major and ongoing transformation of this historic campus, the architects have addressed—practically and symbolically—the evolution of industry from the creation of objects to the formulation of ideas. Just as the original buildings, in their grace and solemnity, once elevated the process of production, the intervention here communicates—in its own language—a reverence for innovation, and suggests that the future always springs from the past. 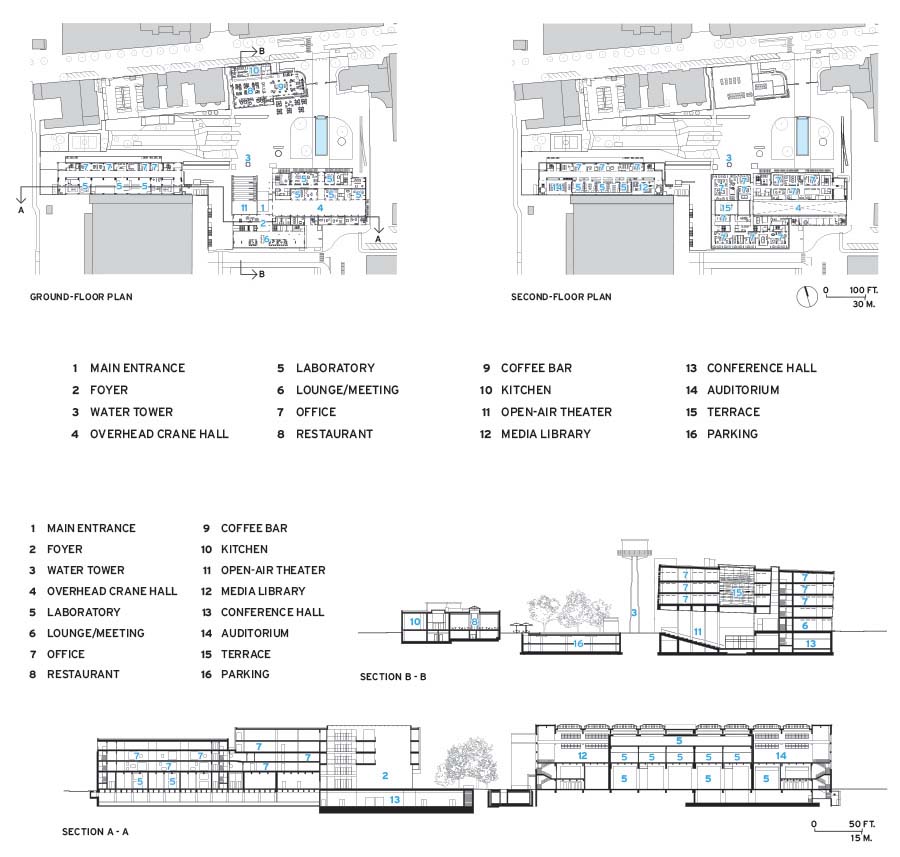