In 1976, Montreal hosted the Summer Olym­pics, and the games left a wild architectural legacy. The showpiece was the main stadium: French architect Roger Taillibert designed an elliptical structure of precast concrete components; its retractable Kevlar roof would hang on cables from a curving, inclined tower.

That 541-foot-high tower, with its 45-degree lean, wasn’t completed until 1987, and it never served its intended purpose as a center and sports-association office. Empty for 30 years, the structure, in the east end of Montreal, has now been repurposed as the workplace for 1,300 employees of the cooperatively owned financial institution Desjardins. The company took seven of the tower’s 12 triangular floors in late 2018, after a renovation by local architecture and interior-design firm Provencher_Roy. 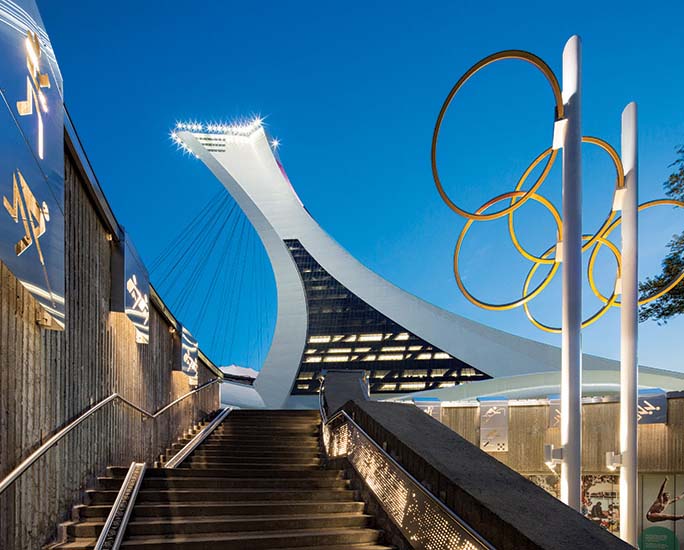 The 541-foot-tall structure now houses corporate offices on its unique triangular floor plates, which get smaller as they rise. Photo © Stéphane Brügger, click to enlarge.

As Provencher Roy’s Richard Noël admits, nothing about this was simple. Office uses usually demand regular floor plates, which the building does not have: it is a thin, triangular tower that shrinks and shifts as it rises to a cantilevered tip. Yet the renovation’s design resolves this tension with careful space planning, and it takes advantage of the building’s Olympic history to create an attractive sense of place.

On the 7th floor, which houses roughly 300 staffers, Noël points out the array of original massive tree-shaped columns that branch upward along one facade. “No two are the same,” he points out, gesturing toward the double-curved concrete members. “We’ve taken advantage of that and exposed them; they are like sculpture within the space.”

Customer-service employees work here in a hoteling system, choosing one of the (very rectilinear) cubicles at the beginning of each workday. But when they step away from their workstations, they can nest within the building’s irregular geometries. Niches between the columns are stocked with chairs for solitary work as well as booths lined in a gray felt for small-group meetings. These areas enjoy fantastic views over Montreal’s east end. 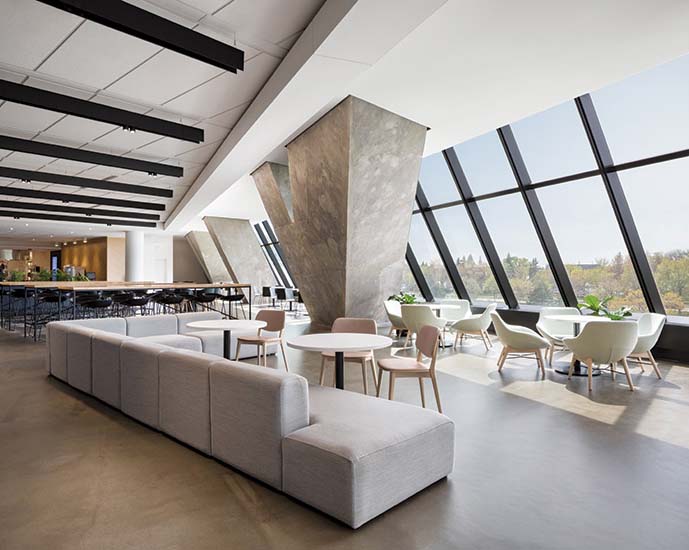 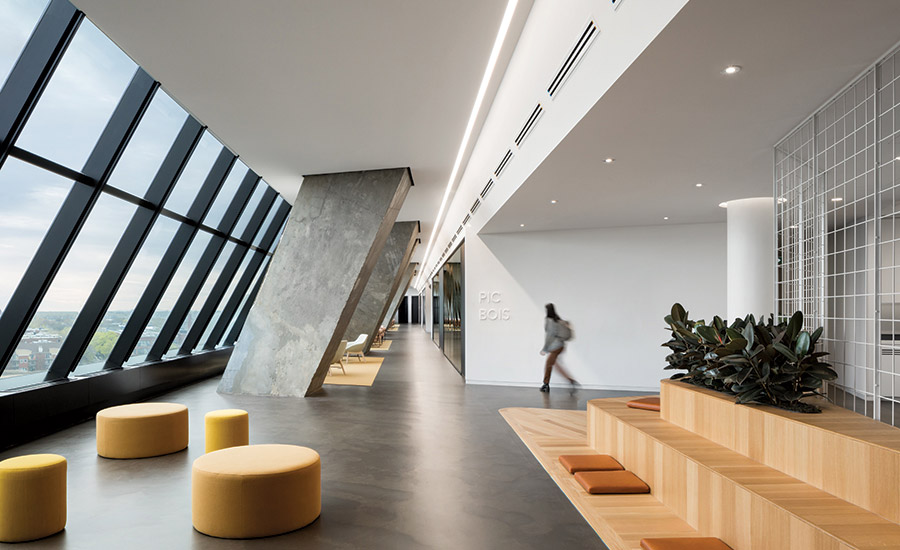 A new curtain wall system enhances views to the city from various spaces, such as the cafeteria and lounge (1), and a meeting and training area (2). Photo © Stéphane Brügger

Those views are enhanced by a new curtain wall system, designed by a team led by Claude Provencher. The architects carried out this work for the Olympic Park organization in 2017, replacing precast concrete panels and windows with the all-glass curtain wall. In the process, they smoothed out the building’s geometry: where the original facade panels had dipped in and out to touch the varied shapes of the columns, the architects created a more regular plane of curtain wall and extended the concrete floor slabs out to meet it.

Then a Provencher__Roy team, led by Noël, oversaw the office fitout. The design picks up on Olympic history. In the Desjardins lobby, a custom ceiling light fixture imitates the orange Kevlar originally planned (but executed in white) for the stadium roof. Images of athletes from the 1976 games—an equestrian, a cyclist—are printed on room-size murals in kitchens and breakout rooms. The interior design also pays tribute to Taillibert’s sinuous architecture. In one staff training area, custom hickory benches echo the swooshes of the stadium’s facades. In the main cafeteria, on the second floor, interior designer Julien-Pierre Laurendeau points out the grain in the veneer of millwork: the grain runs at 45 degrees, the same angle as the tower itself.

This thoughtful use of the tower is part of the resurgence of the Olympic site, which was troubled from the start. The stadium suffered from construction problems and enormous cost overruns. Its original budget of USD$105 million ballooned to about $750 million. The resulting debt earned the stadium the nickname of “the Big Owe.” By the time its tower was belatedly finished—fully 11 years after the games—it was clear that the city’s ambitions had outstripped its spending power.

And yet the stadium is the most recognizable building in the city; it captures the big dreams of midcentury in concrete. Unlike many of its equivalents in other Olympic cities, the whole complex, located next to two subway stops, remains in active use. A multisport facility, including a pool, operates next door; Taillibert’s indoor bicycle arena, or Vélo­drome, was converted into the Biodôme, part of a science museum now under renovation. 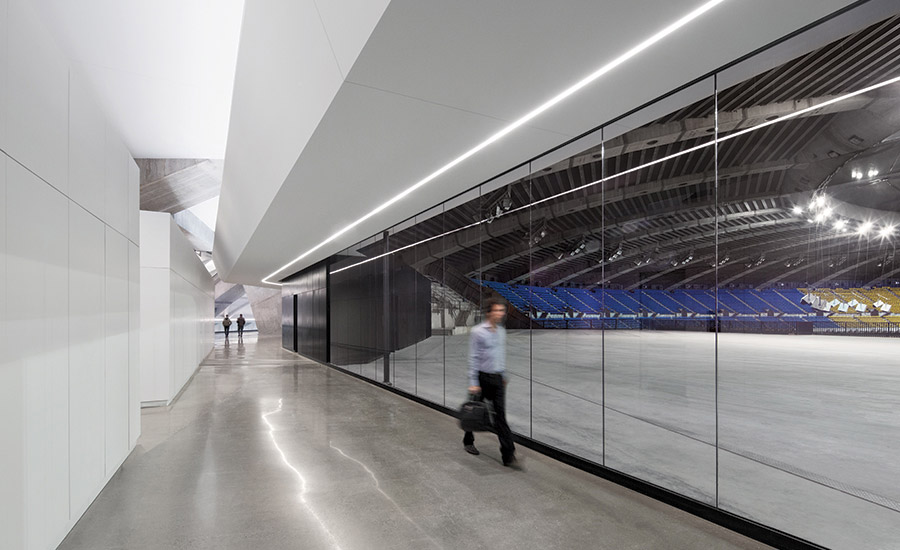 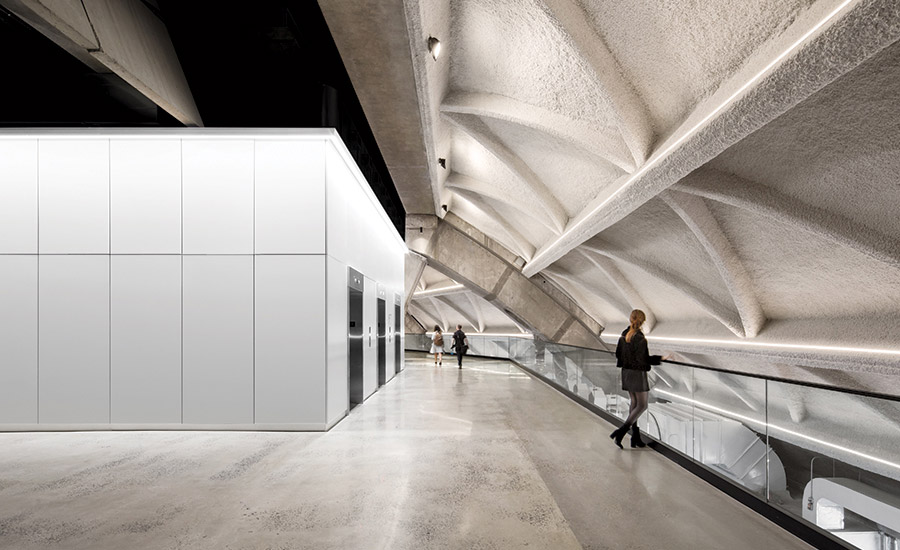 An interior passage leads past the stadium (left) to the office elevators (right). Photo © Stéphane Brügger

The stadium itself, once home to the Montreal Expos, today hosts occasional concerts and monster-truck rallies—Desjardins employees can see these on their way up to work. The procession to the offices includes an interior passage along the edge of the stadium, with expansive glazing to one side that overlooks the field. But the architects and designers worked to open up the other side of the corridor as well: here, giant arching panels land lightly on more trees of poured concrete. “This had to be a place that people were excited to walk into,” Noël explains. And in an ordinary workday, such architectural drama can’t help but lift the spirit a bit higher.

The End of Sidewalk Labs