This website requires certain cookies to work and uses other cookies to help you have the best experience. By visiting this website, certain cookies have already been set, which you may delete and block. By closing this message or continuing to use our site, you agree to the use of cookies. Visit our updated privacy and cookie policy to learn more.
Home » Post-Occupancy Evaluation of the Remodeled Hood Museum
ProjectsBuildings by TypeMuseums & Arts Center ProjectsReuse and Renovation

A year ago, the Hood Museum of Art at Dartmouth College in Hanover, New Hampshire, reopened after a major remodeling by the New York firm Tod Williams Billie Tsien Architects | Partners (TWBTA). As ­RECORD wrote then, this was indeed a radical transformation of a 34-year-old Postmodernist artifact by Charles Moore and Chad Floyd, of the Connecticut firm Centerbrook. We suggested that an assessment of the controversial project should wait until the 62,400-square-foot building had been functioning for a bit. Now it’s time. To the chagrin of those who hoped to keep Moore’s idiosyncratic imprint totally intact, the museum seems to have benefitted from this incarnation. Why is this the case?

Let’s go back to the beginning: in February 1986, RECORD commended the Hood for Moore and Floyd’s batterie de cuisine of Postmodern architectural allusions, from a Romanesque monastery and an outpost of the late Roman Empire to a 19th-century mill, along with a sprinkling of motifs reminiscent of Gunnar Asplund and Eliel Saarinen. As the magazine postulated, “The Hood is meant to improve with age.” 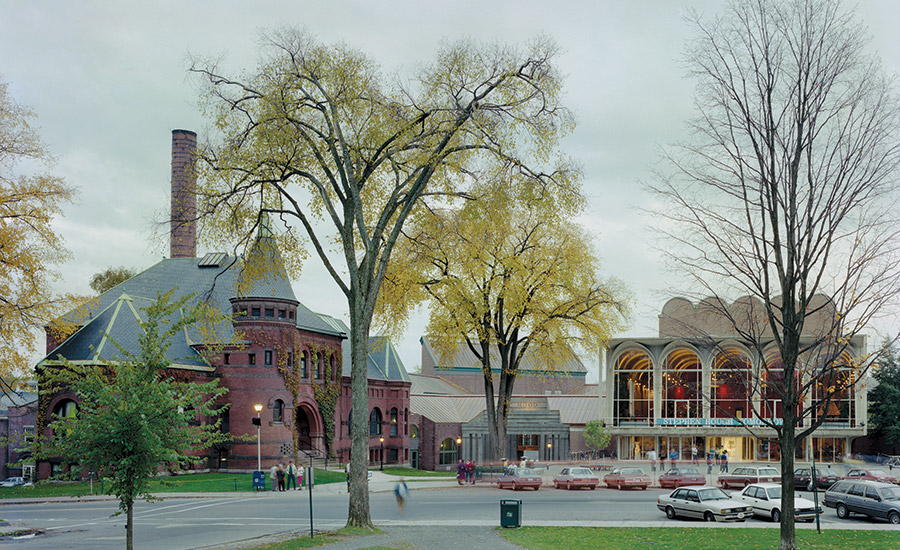 In 1985, Charles Moore and Chad Floyd of Centerbrook designed the museum (above, center) in a Postmodern style. Photos © Michael Moran, click to enlarge.

It didn’t. Several decades later, Dartmouth found it needed more space for its strong ­gallery-based art history program as well as additional galleries for its 65,000-piece collection of Old Masters and American, Native American, African, and Indian art, not to mention more offices. Other problems to be addressed concerned wear and tear, as well as damage from leaks and snow accumulation.

Adding extra space was difficult on the elongated site, crammed between the Richardsonian Romanesque Wilson Hall of 1884 and the ornately modernist Hopkins Center for the Arts, designed by Wallace Harrison in 1962. First-time visitors couldn’t easily find Moore’s dark brick-arched entrance, facing north to the Dartmouth Green. Post­modern vocabulary emphasized ambiguity, but the architectural sensibility of the times gradually favored clarity and simplicity.

Enter Williams and Tsien in 2012 (in spite of a renovation master plan submitted by Centerbrook in 2011, with Wilson Hall as the main entrance to the Hood). TWBTA’s scheme for the Hood caused a stir. In 2016, The New York Times noted that the design drastically altered Moore’s venerated artifact, pointing out the irony that in 2014 Williams and Tsien lost its American Folk Art Museum of 2001 to the New York Museum of Modern Art’s expansion by Diller Scofidio + Renfro. 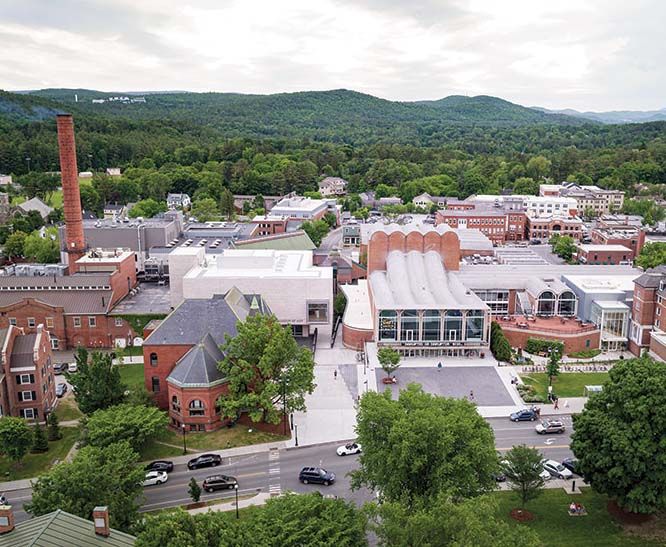 The bird’s-eye view shows the main entrance to the Hood in its context. Photos © Michael Moran

In enlarging and reworking the Hood (a $50 million project), TWBTA added six new galleries and renovated 10 Moore-designed ones, and created three new classrooms for the center for object study. The architects say that they kept almost half of Moore’s contribution: the museum is 55 percent new steel-frame and concrete construction, at the front (north) end of the building, with 45 percent on the south, where there is another entrance, devoted to restoring and renovating Moore’s architecture. (Chad Floyd, Moore’s partner, declined to comment to RECORD on the results.)

TWBTA replaced the original arched brick gateway with an abstract cubic volume of off-white handmade brick, in which a 14-foot square vitrine juts out from the second floor. To give the front entrance a presence, Williams says the firm developed the concept of the vitrine “as a potential cabinet of curiosities.”

While Moore had shown more architectural deference to the Romanesque style of Wilson Hall next door, TWBTA’s design, with its light brick cladding and rectilinear forms, evokes the coloration and massing of the Hopkins Center (now called “the Hop”). Ironically, Harrison’s kitschy arched extravaganza, which had anticipated his Metropolitan Opera House at Lincoln Center (1966), has become more beloved of late. Times do change. 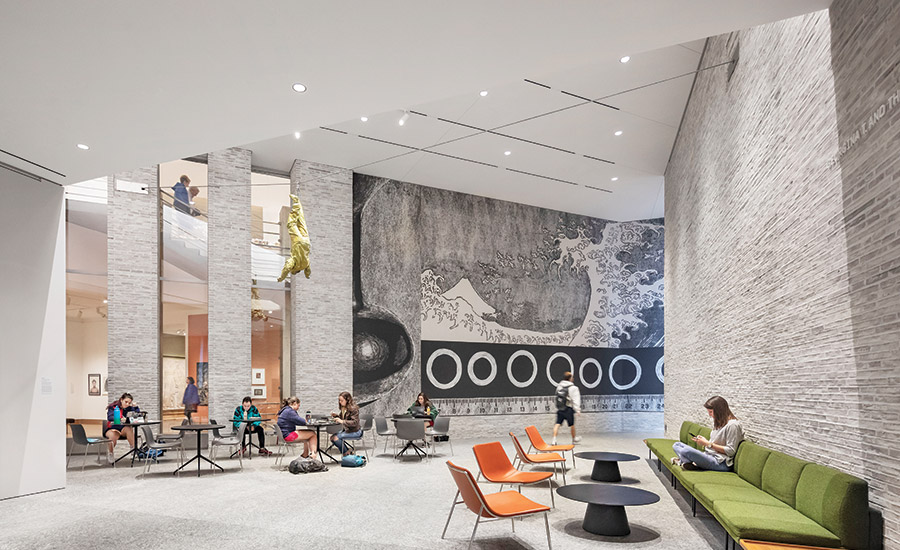 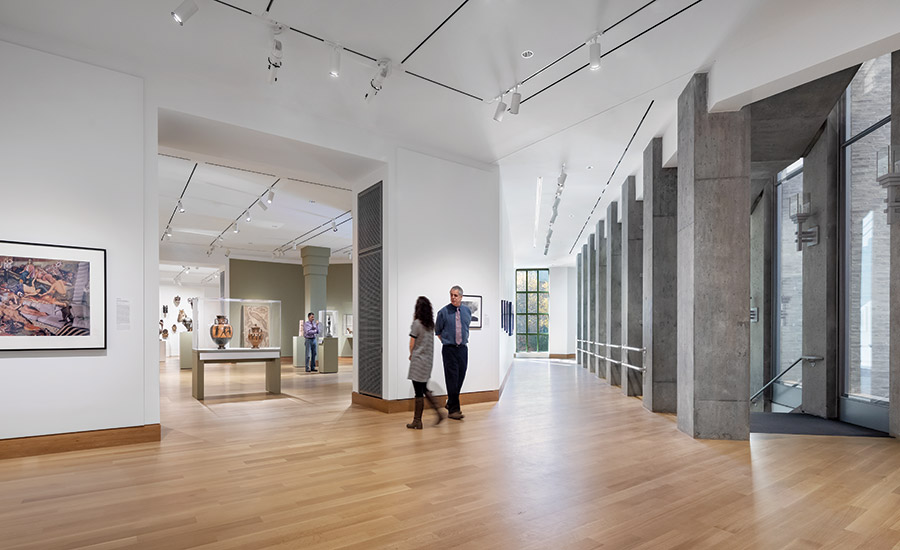 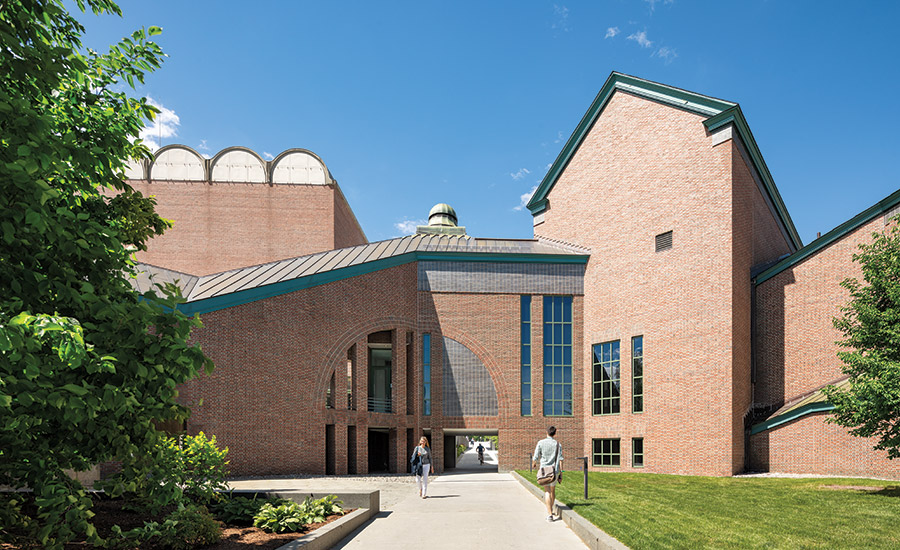 Williams and Tsien filled in a courtyard for a new lobby and designed its felt mural (1). They kept the signature Moore stair (2) and retained the architecture on the south entrance (3), with some modification of the fenestration. Photos © Michael Moran, click to enlarge.

TWBTA’s demolition also pulled the Hood away from the east side of the Hop to open a passageway between the two. As you walk along the path, you easily find the entrance to the new 2,600-square-foot museum lobby where Moore’s open courtyard had been—now a favorite student gathering place, according to John Stomberg, director of the Hood.

On one end of the light-filled atrium’s reception desk is the entrance to the Bernstein Center for Object Study. On the other side are the new and renovated galleries, which continue upstairs. The galleries, of varying heights, typically have oak floors instead of the carpeting of the old days, and most are painted white. Reveals and details in the Moore galleries can still be found, and one of the favorite Moore-ish elements, the ceremonial stair, with its file of ascending concrete piers and distinctive lighting fixtures, remains intact. TWBTA did add a more minimal staircase on the north end, to ameliorate congestion.

Stomberg, who wasn’t the director when TWBTA was hired, says of the reworking: “Tod and Billie conceived the spaces and made them flow much better than we thought could happen.” Various artists at a recent Dartmouth conference also responded warmly, he says. 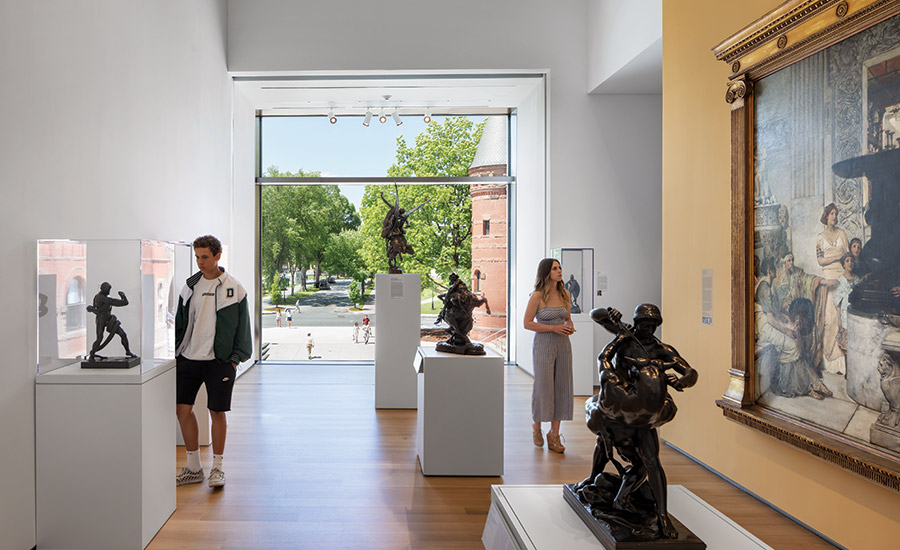 A square vitrine on the second floor allows views to Dartmouth Green. 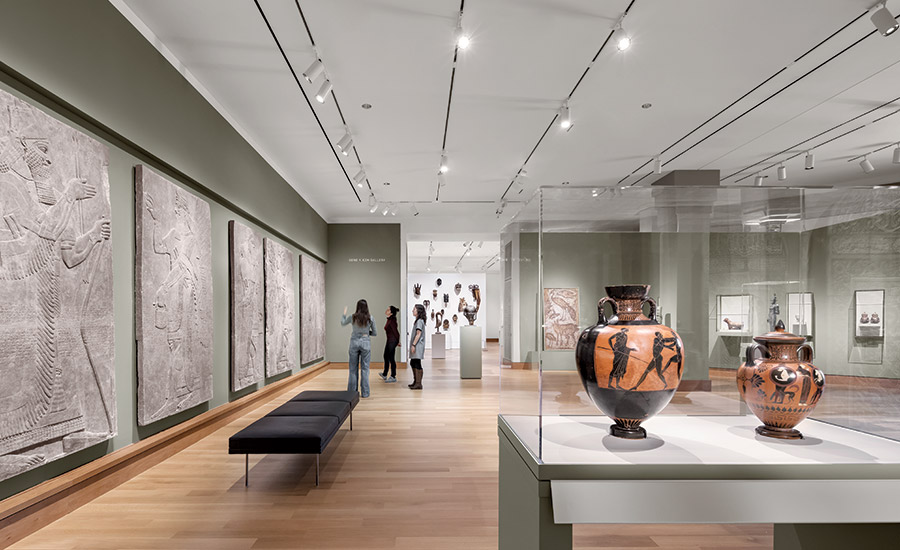 The galleries now have oak floors and simplified details.

Even so, nothing is perfect. While the ­architects solved the problematic snow accumulation by installing a snow-melt system for the copper-hipped roofs and the pavement, visible water spots have appeared on the white brick wall next to the vitrine. Its splotchiness reminds you that, in 1986, RECORD exclaimed that Moore’s Hood did not belong to a “vul­nerable modernism whose esthetic purity diminishes with every weather stain.” A scha­denfreude moment: you can almost hear Charles Moore saying, “You can’t see watermarks as easily on dark brick.” Nevertheless, the problem, involving flashing, is being resolved.

In the meantime Dartmouth has already expressed its appreciation for the outcome by bestowing Williams and Tsien with honorary Doctor of Arts degrees at its 2019 commencement. As Stomberg points out, “One of the benefits of the Moore space was that you felt his presence. Tod and Billie are quieter. You can almost forget there is a controlling hand in shaping spaces.” And when you walk through the museum, you realize he has a point.