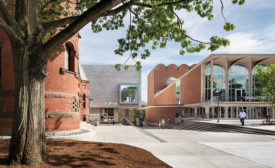 No Comments
Say Goodbye. Monday was your last chance for an unobstructed view of the celebrated facade on the Manhattan building Tod Williams Billie Tsien Architects designed for the American Folk Art Museum. The Museum of Modern Art, the building’s new owner, began erecting scaffolding in front of the structure in preparation to demolish it. Despite loud protests from the architecture world and an attempt by Diller Scofido + Renfro to adapt the building, MoMA is tearing down the former Folk Art museum to accommodate an expansion of its own facilities. On April 15, Tod Williams and Billie Tsien issued the statement
Read More

Cathleen McGuigan
No Comments
MoMA rushes to raze Midtown Manhattan gem. Photo © MichaelMoran/OTTO The Folk Art Museum building's stair contained niches for objects in the collection and led visitors through the narrow structure. Next month, RECORD will present projects by architects who give new life to old buildings through thoughtful renovation or adaptive reuse. Unfortunately, that kind of creative thinking wasn't brought to bear to save the acclaimed former home of the American Folk Art Museum from demolition. Designed by Tod Williams Billie Tsien Architects, and opened in late 2001, this little gem in Midtown Manhattan—six stories high and only 40 feet wide,
Read More

Fred A. Bernstein
No Comments
“The public is invited into the process very late,” said Nicolai Ouroussoff, the architecture critic, referring to the decision by the Museum of Modern Art and its architects, Diller Scofidio + Renfro, to tear down the former home of the American Folk Art Museum, which stands in the way of MoMA’s recently announced expansion. And Ouroussoff was right: Eight hundred people turned out for what was, in effect, a town hall meeting on the demolition of the Tod Williams Billie Tsien building, which heated up a Manhattan auditorium on a very cold night. But then, after nearly two hours of
Read More

The Museum of Modern Art (MoMA) announced today that in its next phase of expansion, it will tear down the 2001 American Folk Art Museum building designed by Tod Williams Billie Tsien Architects.

The Museum of Modern Art plans to destroy Williams and Tsien's gem.
Cathleen McGuigan
No Comments

In this issue of RECORD, we explore works of architecture as urban catalysts—buildings that raise the stakes for design in their neighborhoods while successfully engaging the surrounding context.

The Museum of Modern Art in New York announced today that it has commissioned Diller Scofidio + Renfro to plan an expasion into the former site of the American Folk Art Museum.