The site is Casablanca’s former Anfa airport. It may not be the one where Humphrey Bogart famously bid farewell to Ingrid Bergman in the 1942 film classic named after the Moroccan port city, but it was an important military and commercial hub for decades until it closed in 2007. Located about five miles from the old Medina, nearly 250 acres of runway and demolished aeronautical buildings are now being developed here into Casablanca Finance City (CFC), a public-private initiative born in 2010 that invites global firms to establish their regional headquarters in Casablanca. “If you want to do business in Africa, you need boots on the ground,” says CFC director of strategy, partnerships, and communication Manal Ber­noussi. A city of nearly 3½ million, Casa­blanca (its name means “white house,” of course) is home to Africa’s largest mosque and soon-to-be-largest theater, designed by Paris architect Christian de Portzamparc and opening later this year. The city is now poised to become the continent’s economic capital. 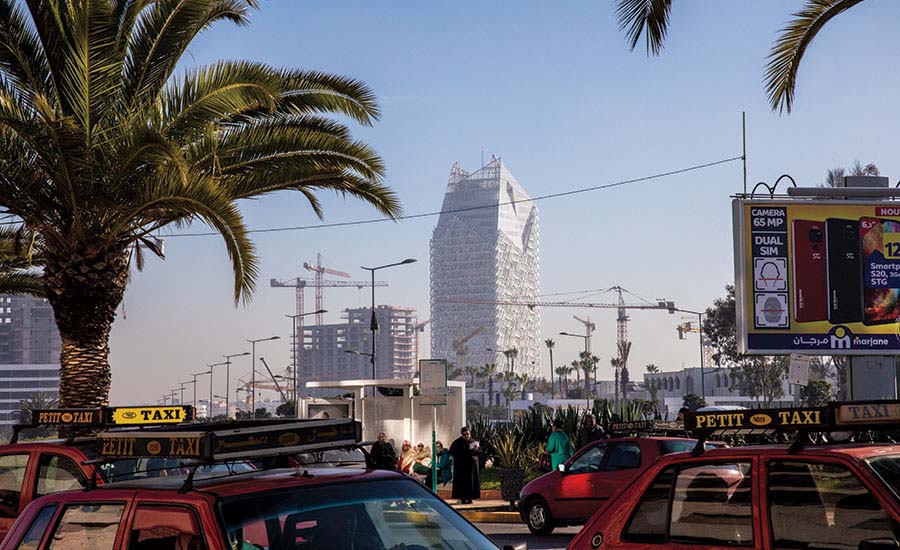 The building is a landmark in the city. Photos © Jasmine Park, click to enlarge.

Mayne and the New York office of his firm, Morphosis, led by Ung-Joo Scott Lee, designed a building that has one very obvious thing in common with just about every other building in Casablanca—it is white. But that’s where the similarities end.

The 400-foot-tall, 25-story tower—among the highest in the city, but slightly smaller than the minaret at the giant Hassan II Mosque—tapers at the top, but also at its base. “It touches the sky and the ground,” says Mayne, who made sure it did so memorably by upending the typical tower morphology and creating a shard-like crown—which contains an open-air event space with green walls—and a prismatic base. 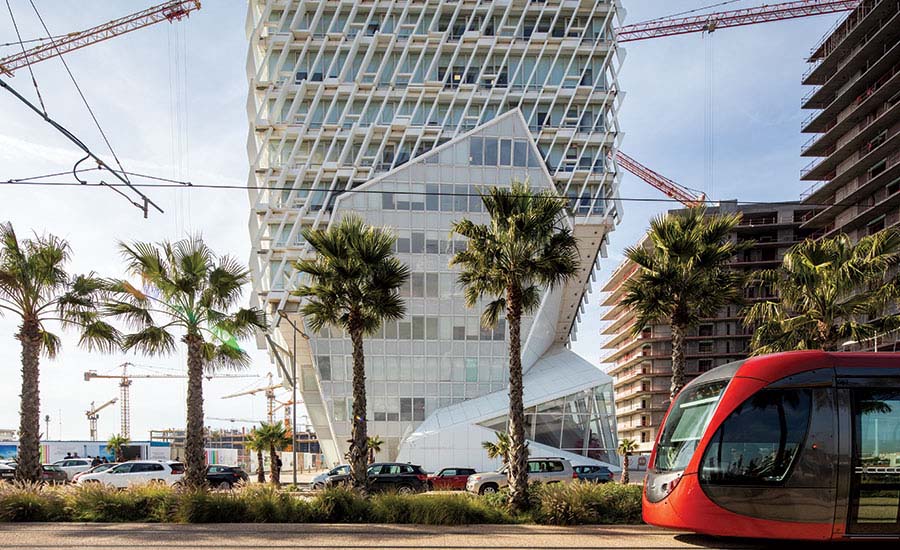 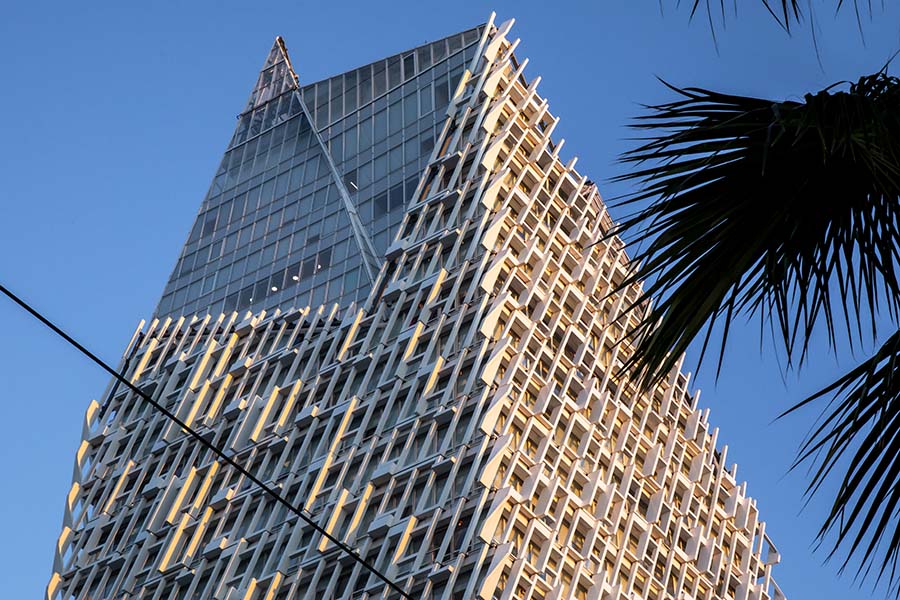 The 25-story tower tapers at its base as well as at its shardlike crown. Photos © Jasmine Park

The midsection of the reinforced-concrete building, which houses offices for tenants PricewaterhouseCoopers and AIG, among others—all of whom fit out their own spaces—is wrapped in a fixed, angled, textural brise-soleil inspired by traditional geometric mosaics and wood latticework screens characteristic of Moroccan architecture. Originally conceived in concrete—“We wanted to give it a handmade quality,” says Mayne—the modular facade elements, prefabricated in Italy, were ultimately made out of aluminum, for cost reasons, and assembled on-site to have varying depths. That striking feature, and the low-E-coated insulated glazing with a frit pattern beneath it, work together to control glare and heat gain in this mild climate (though often the shades need to be drawn as well). It is one of several features—including tenant submetering for lighting, plug loads, heating, cooling, and water, and the use of occupancy sensors for lighting control—that contribute to the project’s meeting LEED Gold requirements, the first in Morocco to do so. 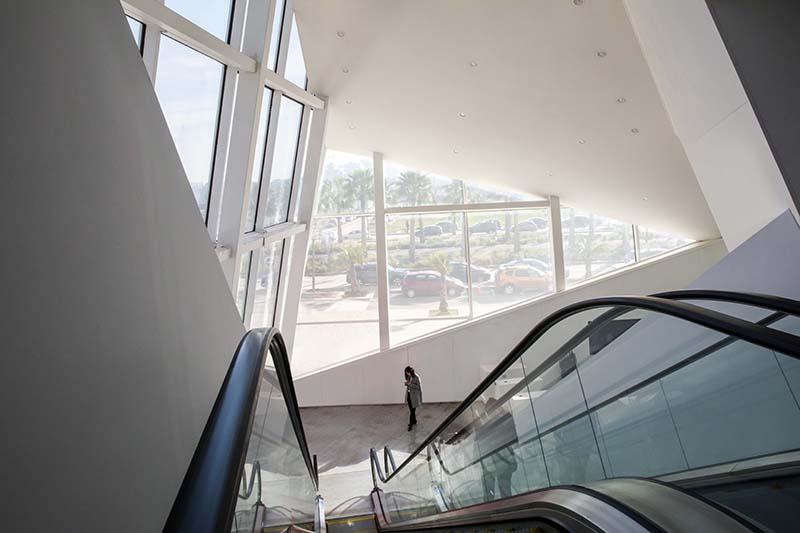 The canted walls at the base create a dynamic lobby. Photo © Jasmine Park

While LEED Gold today feels rather unremarkable, and this building’s systems in particular rather standard for such a perceived accolade, on a larger scale, Morocco’s ambitions for sustainability surpass those of many nations. It has the world’s largest concentrated solar farm, at the door of the Sahara desert, and a goal to have 52 percent of its power come from renewable energy by 2030. Half of CFC’s site is devoted to green space, with an expansive new park opening soon. 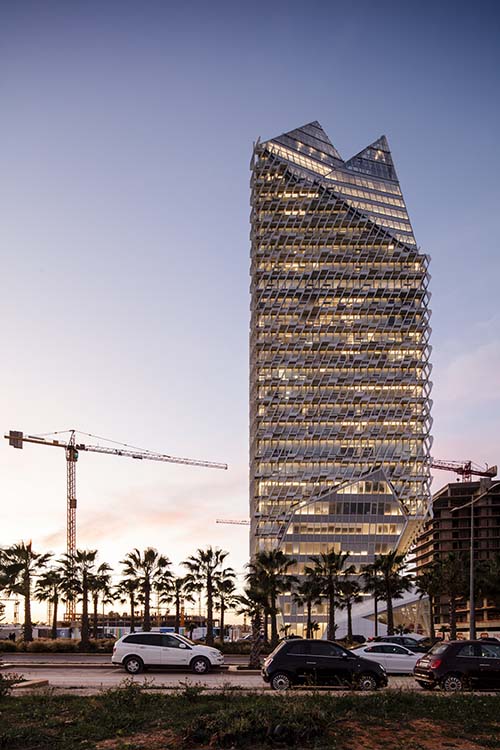 Morphosis’s tower cuts a singular figure on the city’s skyline. But that may not be for long. Construction activity is heavy at CFC, with other office buildings, a school, a potential supertall, and lots of housing going up, including two condominiums beside this office tower that are a little too close for comfort. “The speed at which this whole urban ensemble has come together is just astounding,” says Mayne, who doesn’t seem to mind his building’s fading into the background. “I like the cheek-by-jowl quality. This is not a city of perfection; you have to accept happenstance.” In this case, that also means a less than ideal construction quality, particularly for Morphosis’s signature complex assemblies. Nevertheless, the crystalline structure, a true diamond in the rough, has made its mark, its glass top and mesh armature twinkling in the Moroccan sun. 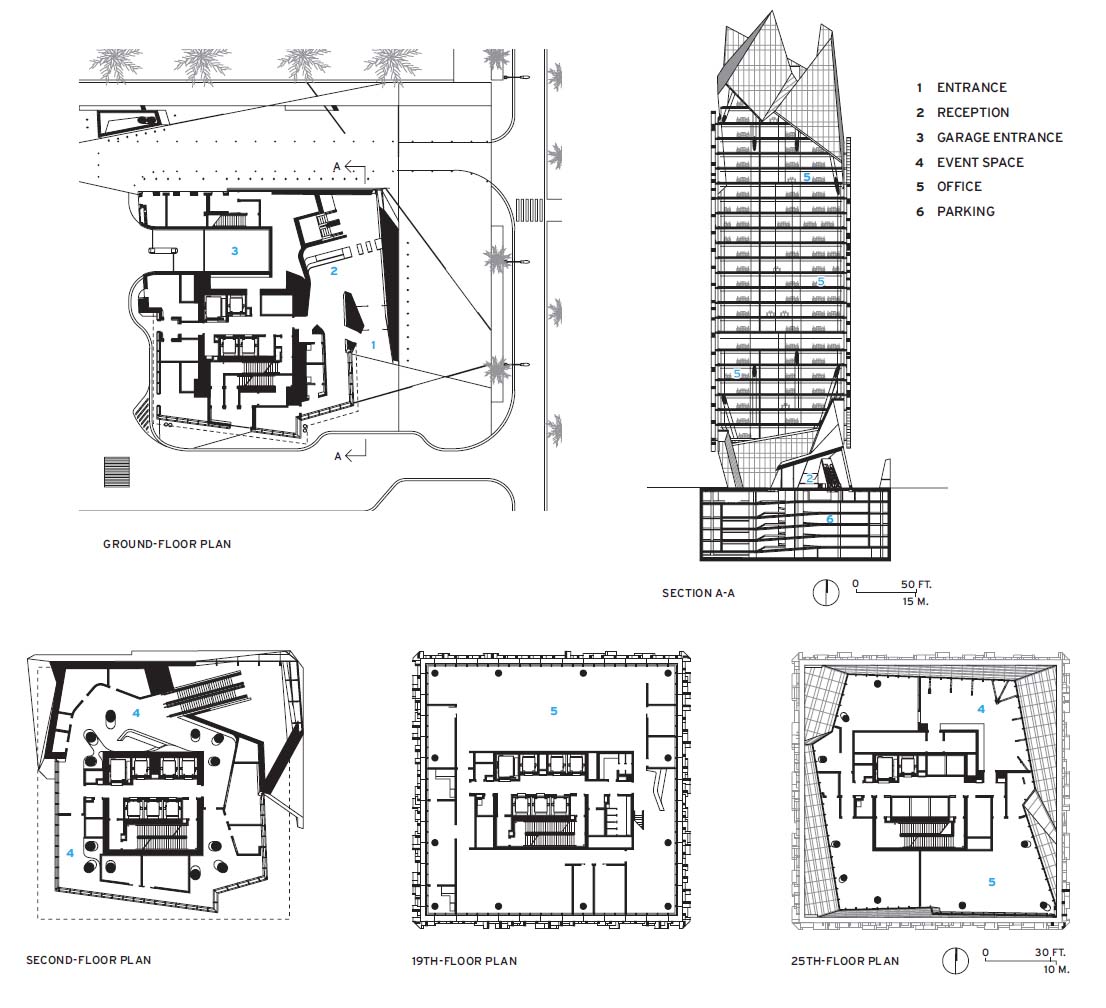