When we imagine how art connects to architecture, we tend to think of, say, a mural commissioned for a skyscraper lobby or an immense sculpture parked outside—like the epic Mark di Suvero perched next to Renzo Piano’s Daimler Chrysler building in Berlin or the looming Richard Serra guarding the entrance to Tadao Ando’s Modern Art Museum of Fort Worth.

But Costantino Nivola (1911–88) was an artist of a different sort, whose work with some of the greatest architects of the 20th century was more subtle and closely engaged with the buildings themselves. His muscular sculptures and reliefs—of abstracted forms and figures—were often integrated directly onto exterior walls. He worked largely in sand-cast or carved concrete, which complemented the tough materiality of the modernist structures and urban spaces he enlivened. Yet, as the critic Ada Louise Huxtable argued, Nivola played off architecture, rather than deferring to it, bringing texture and complexity with works that more than matched their host buildings with a sense of timelessness.

Though he was extraordinarily prolific, Nivola is not nearly as well-known as he should be. An exhibition at the Cooper Union in New York may begin to remedy that. Called Nivola in New York: Figure in Field (through March 15), the gracefully installed show highlights a range of the artist’s works, particularly in New York City, where he created 21 public projects, of which at least 17 survive—for schools, plazas and civic buildings. The show’s curators, Steven Hillyer, director of the architecture archives at Cooper, and architect Roger Broome, also have published a guide to visiting those extant works throughout the city’s five boroughs.

Nivola was born in Sardinia, the son of a mason, and studied design in Monza. After working for Olivetti’s publicity department in Milan, he and his designer wife, Ruth, who was Jewish, fled Italy, landing in New York in 1939. Tino, as he was known, became part of the then-small art world in Greenwich Village, supporting his family as a magazine art director (including for Interiors and Progressive Architecture). Later, the Nivolas moved to the Springs, on the East End of Long Island, where their neighbors included Jackson Pollock. It was there, in 1949, playing with his children on the beach, that the artist began developing his technique of sand-casting—making molds of wet sand into which he poured plaster or concrete. He also worked in the ancient technique of sgraffito, scratching designs through layers of cement. 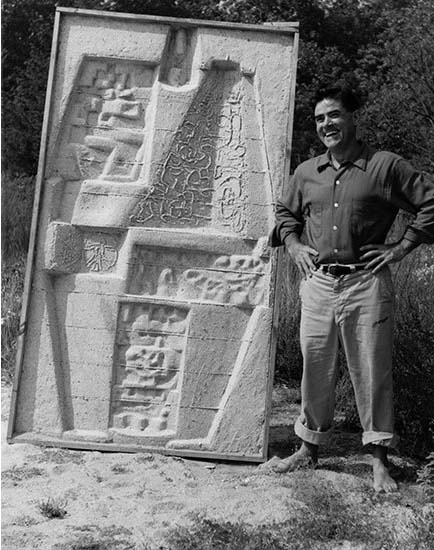 Nivola circa 1955. The mold—for a maquette for a relief—is in the Cooper Union show. Photo © Carl Stein/Elemental Architecture

His first major commission was in 1954, for the Olivetti showroom on Fifth Avenue: a wall relief 75 feet long and 15 feet high. Richly modeled and textured, it was neutral in color—perhaps so as not to compete with the lavish décor by the Milanese firm BBPR, with its curving marble pedestals rising out of the green marble floor like stalagmites, each one topped by a single typewriter. When the showroom closed in 1970, the relief was rescued by Nivola’s friend Josep Lluis Sert for his Science Center at Harvard. Nivola then applied some color to it, as he apparently always wanted to. A photomontage of the relief—and a wonderful small maquette of it—are central features in the Cooper Union exhibition. 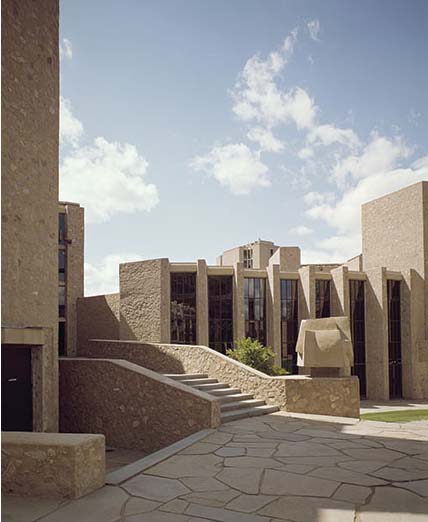 Besides Sert, Nivola collaborated with Eero Saarinen (on the Morse and Stiles colleges at Yale); Marcel Breuer; Pietro Belluschi; SOM; HOK; Raymond Lowey; and Harrison & Abramovitz. With architect Richard Stein, he created a number of the New York works. And with Paul Rudolph and Shepley Bullfinch Richardson & Abbott, he made two sgraffito murals in 1969 for the Hurley building in Boston, which are now under threat of demolition.

The artist was good friends with many of these architects, but one of his closest compadres was Sert, who introduced him to Le Corbusier in a New York restaurant in 1946, when the master was in the city for the United Na­tions project. Corbu, much older, began to visit Nivola, first in his small New York studio, where, “bourbon in one hand and sketchbook in the other,” Nivola recalled, “the tutorial began.” Le Corbusier painted every day, and when, in 1951, he visited his protégé in Springs, he painted a mural on the walls of the living room in the Nivolas’ old shingled house, where it remains today (the house is privately owned). 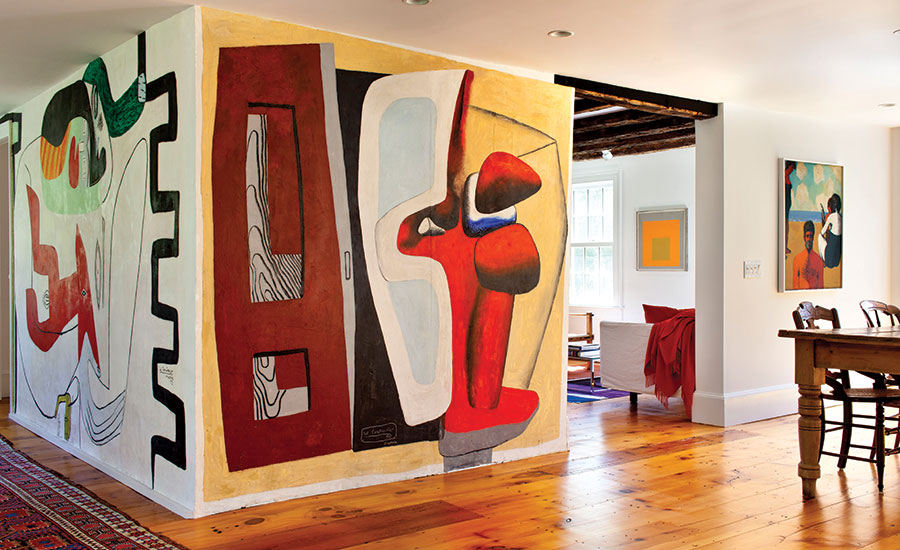 In the 1960s, Nivola continued to create public work, but he also made paintings and smaller tabletop sculptures; the three types of artwork are so different, one can hardly believe they are by the same artist. The bold, frenzied paintings of New York are crazily dense with the energy of people, buildings, and traffic, whereas his refined small sculptures, in polished marble or bronze, have the serene simplicity of ancient Cycladic art.

Those later pieces are in museums and private collections, but Nivola’s surviving public work with architects remains available to all of us; it was a matter of principle the artist deeply believed in. “A work in a public place is a civic act,” he said. “It has to do with how we live together . . . [and] should create an atmosphere, a quality that goes above the ego of the individual artist.” Nivola was a fascinating, versatile artist and humanist whose gifts should not be forgotten.

The Way We Work

The Ford Foundation’s Renovation Reflects the Future of Its Mission