The client for the Krushi Bhawan, a government office building in eastern India, had a very different notion at first about the project. “We initially envisioned a typical glass office building,” admits Srinibas Naik, speaking for the Department of Agriculture and Farmers’ Empowerment in Bhubaneshwar, the capital of the state of Odisha. “But gradually we warmed up to this unconventional design.” When Studio Lotus, the Delhi-based architecture firm, got the commission, they took the brief and radically developed it, creating a low-rise redbrick facility that embraces local traditions, deeply engages the public, and tackles climate concerns—all of which are seldom inspirations for modern government buildings in India. Located in the center of the city, near other state facilities, the Krushi Bhawan sits in a garden and is open and inclusive. “We wanted to provide a well-lit and ventilated building, as well as explore the connection of the city to the building’s interiors,” says Sidhartha Talwar, design principal and cofounder of Studio Lotus. “All of this is missing in the nearby office buildings.”

The plan of the four-story, 140,000-square-foot concrete structure is based on a grid of approximately 15 feet by 15 feet. The main floor is accessible to the public, while the government offices are on the upper floors; a roof terrace will eventually be accessible for training purposes. From the main gate are two pathways—one for the public to an elevated plaza that has community spaces and landscaped areas, and another that leads to access for employees. From the raised plaza, the public can enter the building’s central courtyard, which is surrounded by various multifunctional facilities, training rooms, a gallery, and an auditorium used both by the department and for public events. 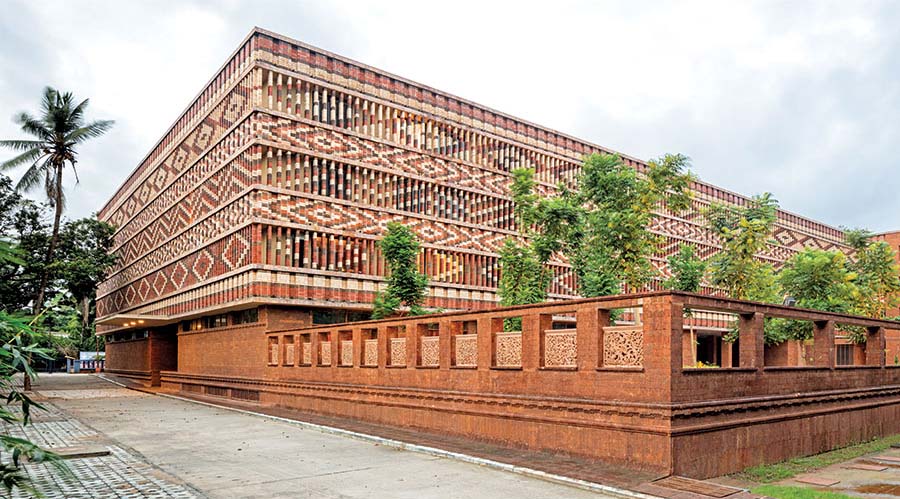 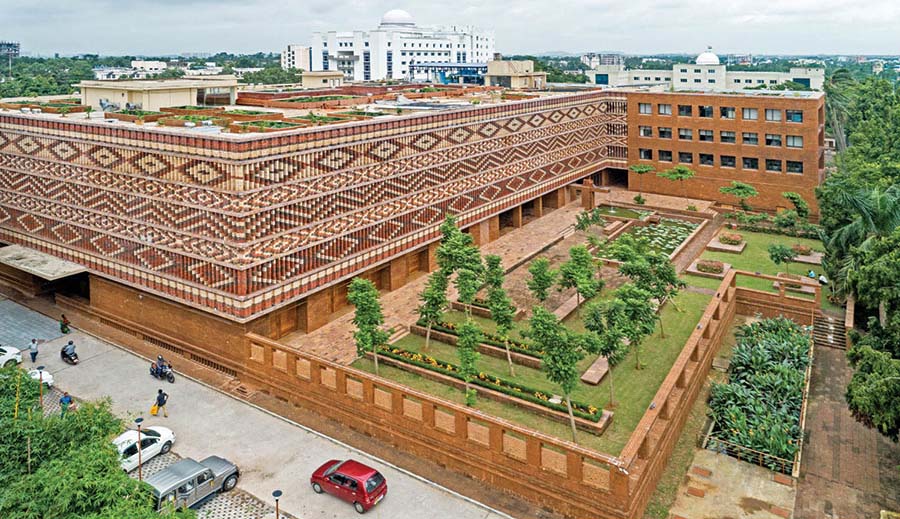 The building’s most striking feature is the incorporation of regional art and handicrafts that create a symbiotic relationship with the architecture. The area’s traditional ikat—a patterned textile-dyeing technique—is mapped onto the brick facade with remarkable elegance, in colors similar to the soils of Odisha. And the tribal craft of dhokra, or metalwork, is evident everywhere—in light fixtures and screens with animal figures and foliage. The exposed columns surrounding the central courtyard are made of local sandstone and laterite. The bricks, however, were sourced elsewhere. “We wanted the bricks to be of a certain standard and stability,” explains Talwar. “We got them from northern India, where we could find them in the corresponding colors.” 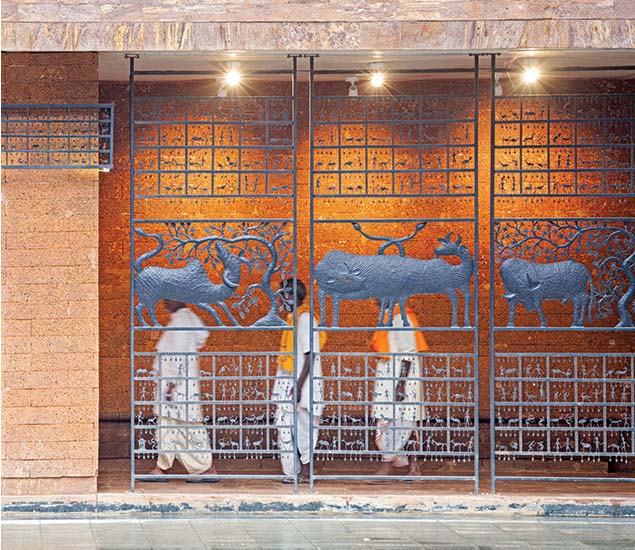 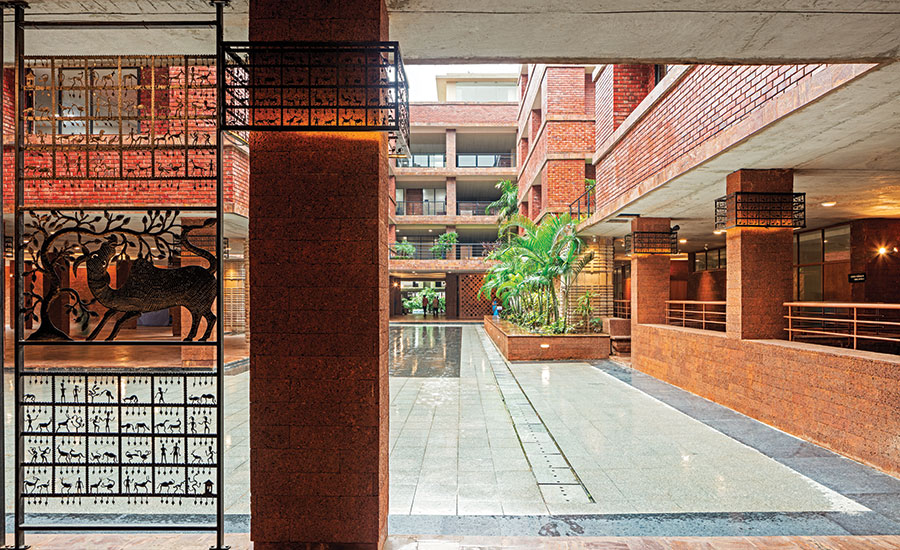 Dhokra, or tribal metalwork, is used for screens and light fixtures, while columns are made of sandstone. Photos © Andre J. Fanthome

Interior walls are adorned with agricultural motifs—a crop calendar is inlayed into a stone floor, for example—and scenes from local mythology, and local stone is used for cladding and flooring, as well as in the landscape features of the plaza. Overall, these details imbue the project with a strong sense of cultural familiarity and regional context. When the design team commissioned the local craftspeople, they provided them only with general ideas, giving them ample creative license for designing the narratives and then fabricating the artisanal elements.

The craftsmanship and extensive sustainable features of the architecture are a tribute to the vision of Otto Konigsberger, the German-born architect and planner who, at the invitation of Prime Minister Jawaharlal Nehru in 1948, laid out the modern city of Bhubaneshwar. The building uses passive design strategies in the staggered massing (that helps shield the building from the heat of the sun), the recessed windows, and the double-skin brick facade. To address the tropical climate, a night-purge ventilation system—a first in an office building in Odisha—takes advantage of the structure’s optimal north–south orientation: 40 mechanized rooftop ventilators extract hot air and inject the cooler night air through ceiling and floor vents. Only 20 percent of the interior spaces are air-conditioned—the third-floor offices that become extremely uncomfortable for a brief period each year. The raised plaza, the courtyard, and light wells all enhance air circulation. Other sustainable aspects of the project are solar panels on the roof, rainwater harvesting, and the extensive use of local materials. 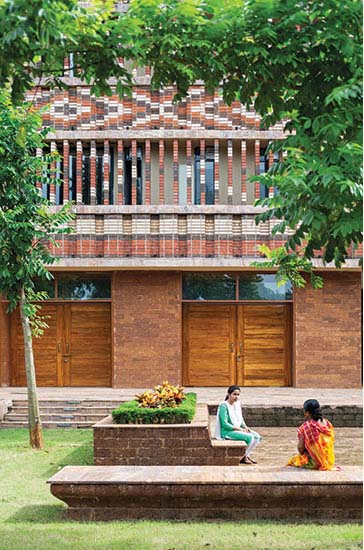 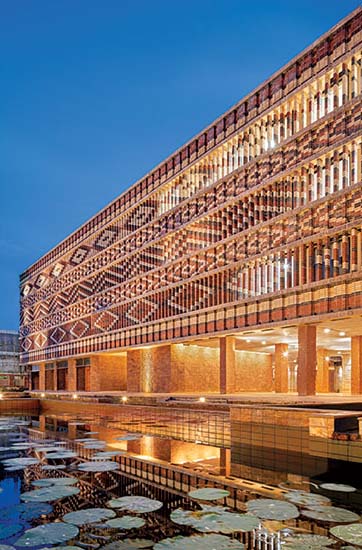 The garden (3) and a lily pond (4) offer respite to the public. Photos © Andre J. Fanthome

The magnificent yet unintimidating scale of the building, and the solid massing interspersed with intricate detailing, evoke power while celebrating the skills of almost forgotten artisans. Where the design falls short is in the interior modular furniture, which is no match for the elegantly crafted exterior. (The architects agree and wish they had protested against the furnishings.) Lack of proper maintenance may also prevent the building from remaining as timeless as it now appears. 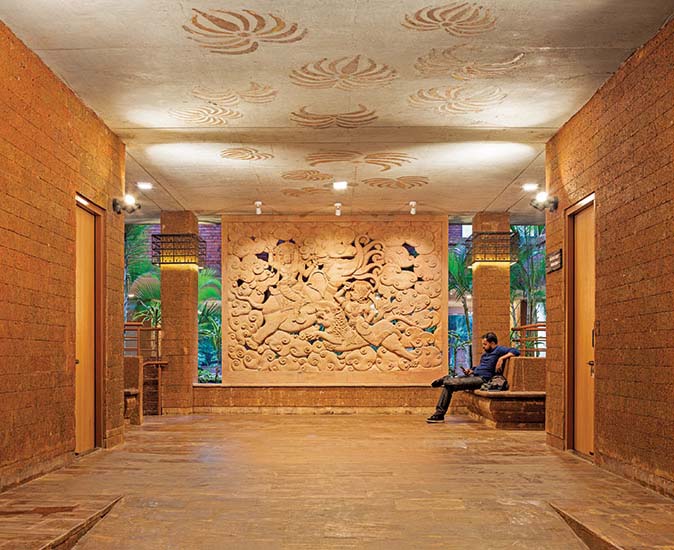 Notwithstanding, architecture is never only about the finished building, but also about its intention. And in fulfilling the architects’ vision, the execution was a successful collaborative process among the designers, the builders, and, with the client’s enthusiastic encouragement, 150 local artisans. The achievement of this unusual project, in one of the fastest-developing second-tier cities in India, is bound to influence peer cities across the subcontinent. “People are enjoying the ambience here,” says Naik. “It is a source of pride for us and our city.”

Krushi Bhawan could become an inspiration for designers of urban buildings globally, where the past can be skillfully knit into the present through the combination of sustainable and contextual design solutions with a contemporary architectural vocabulary that is rooted in craft and traditional culture. Bold in its approach, the building provides a model for creating identity and architectural expression that can go on into the future, in Odisha and beyond. 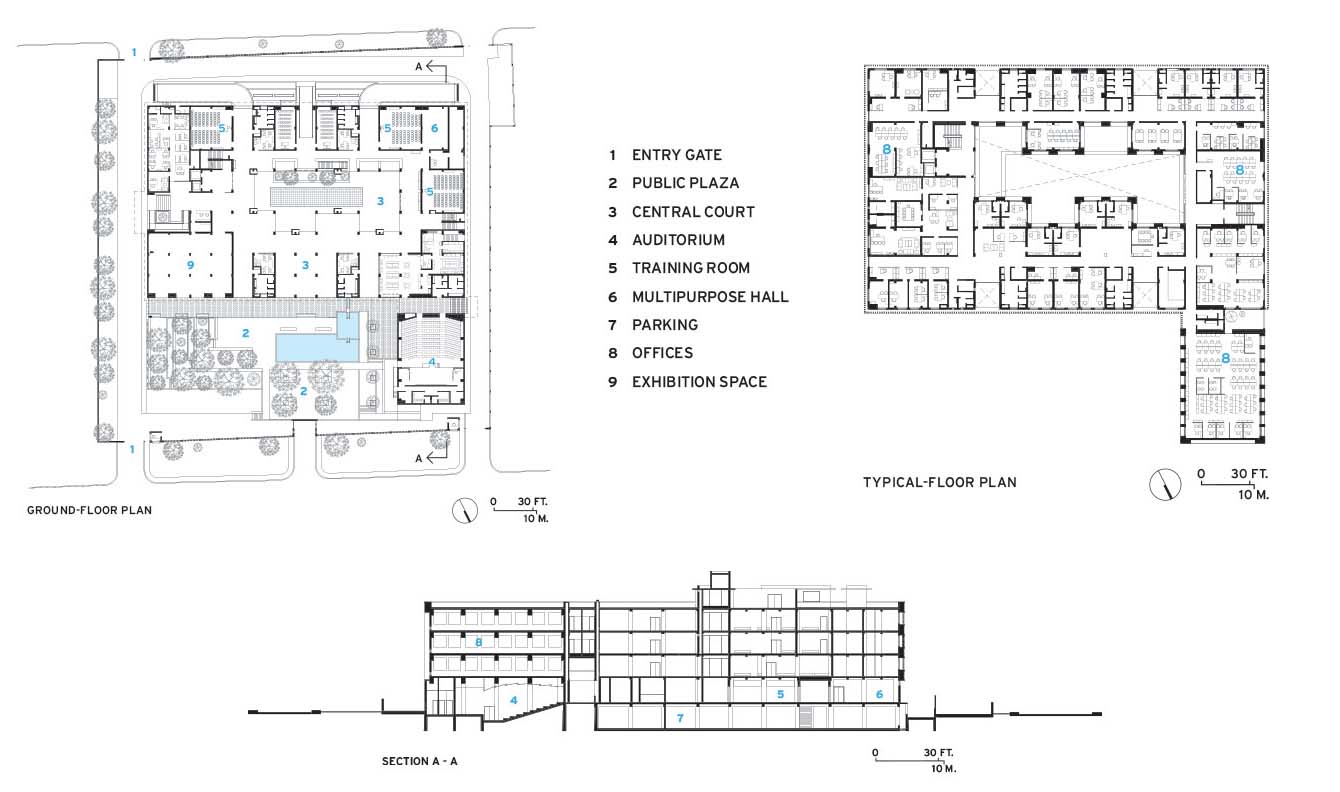 Apurva Bose Dutta is an architect and award-winning architectural journalist, curator, and editor based in India.