Chile’s rugged central coast is not for the faint of heart. Outside the small fishing town of Los Vilos, 140 miles north of Santiago in a place called Ochoquebradas, the wind whips as the sun beats down on the arid, treeless landscape and the Pacific Ocean thrashes the rocky shore. Tokyo-based architect Ryue Nishizawa has responded to this unforgiving backdrop with an unusual serpentine house that shows its mettle and provides shelter, but not too much. “The presence of wild natural elements such as sea and wind is powerful,” says the architect. “We wanted to make a house with a strong nature.”

The house is part of a project named Ochoalcubo (“eight cubed”), the brainchild of Santiago businessman and design impresario Eduardo Godoy, which embodies eight development projects in Chile, each with eight buildings designed by different architects. Six years ago, the first phase was completed farther down the coast, with eight houses by established as well as up-and-coming local designers. Following devastating earthquakes in Chile and Japan in 2010 and 2011 respectively, Godoy was moved to make the project’s third and fourth phases a collection of buildings by designers from these two countries. 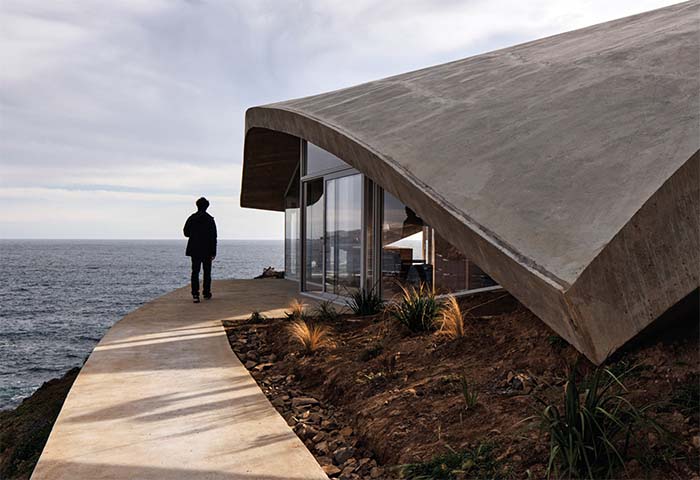 With the help of his friend Toyo Ito, Godoy, who runs his development concern with his son Philippe, brought in Kazuyo Sejima, Kengo Kuma, Junya Ishigami, Sou Fujimoto, Atelier Bow-Wow, Akishisa Hirata, onishimaki+hyakudayuki, and, of course, Nishizawa to design houses that sit along an 875-yard stretch of coastline in Ochoquebradas (Eight Ravines). Eight Chilean firms are also designing houses. The architects were given virtual carte blanche, other than minimal guidelines such as a mandate to use concrete as the principal building material and for each structure to be of limited size (with most under 3,000 square feet). To date, a house by Alejandro Aravena—a dramatic trio of concrete blocks leaning and stacked atop one another—is ­complete, and one by Max Núñez—a swoopy form perched along the cliff—is under construction, both just down the shore from Nishi­zawa’s house. “We want to show that it is possible to do a different kind of development here,” says the younger Godoy, “one that triggers emotions—not the same boring architecture that is the standard in Chile.” 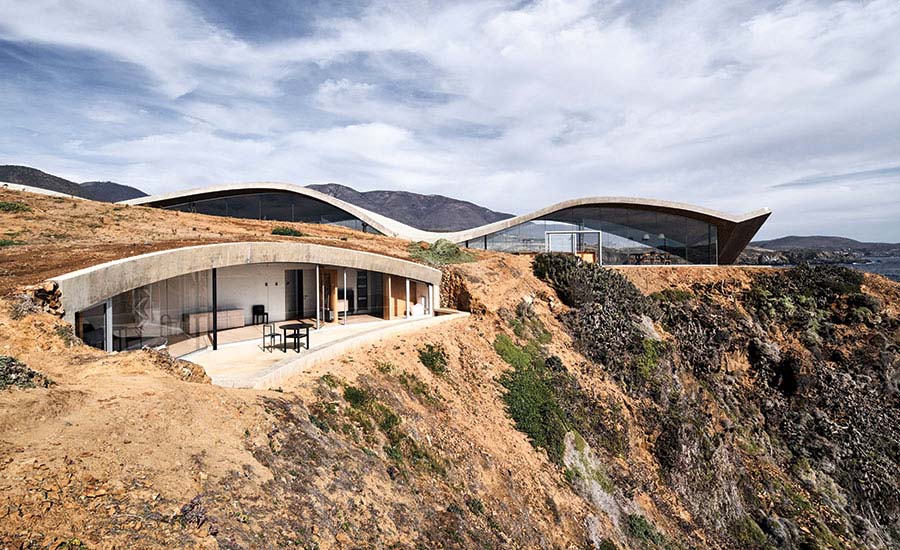 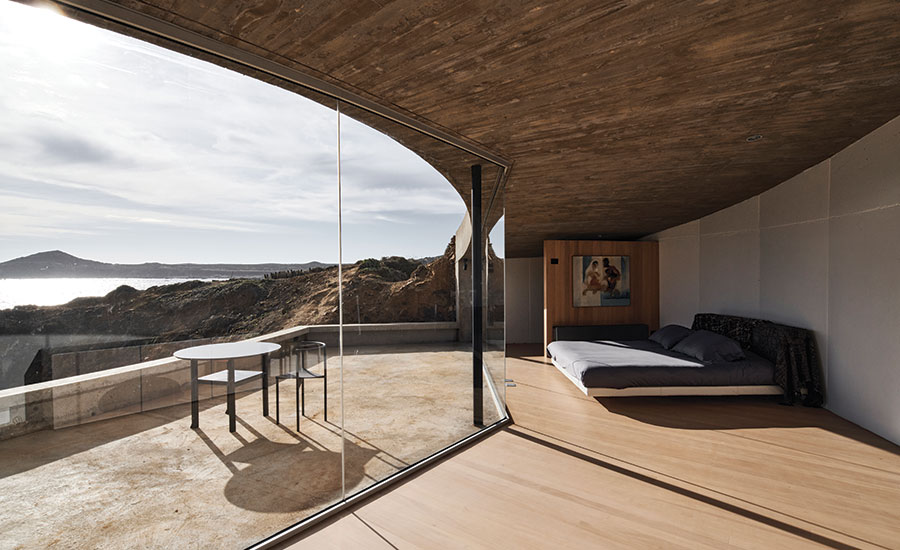 The master bedroom is tucked into the cliff farther down the hill from the main volume. The team started construction with this subterranean portion, using it to test the concrete under the conditions here. Photos © Cristóbal Palma

Approaching the project, Nishizawa envisioned an undulating structure that would hew to the topography of the site’s promontory, which drops down precipitously to the raging surf below. “While developing the shape,” says the architect, “we studied how the house could blend in with the site’s rough terrain while responding more broadly to the coastal environment.” Simply put, the building consists of a slab on rock topped by a concrete canopy that rises and falls in waves and is pinned to the earth at strategic points, like a tent pegged to the ground. This volume contains the living spaces and a spa, with the master bedroom buried in the earth farther down the cliff, accessible via a long concrete tunnel-like stair that makes you feel as if you are entering a bunker. (There are few finishes to speak of in the spare, raw interiors, as walls and ceilings are concrete and glass, with mañio wood for flooring.) Using the roof to create arches that connect to diagonally oriented anchors, notes the architect, enabled large spans and broad views out—giving occupants the impression of teetering on the edge of the vertiginous precipice. Between the two slabs are floor-to-ceiling planes of glass. “There are no walls to speak of,” says Nishizawa. “It is like a building of ground and roof only, in the midst of abundant nature.” 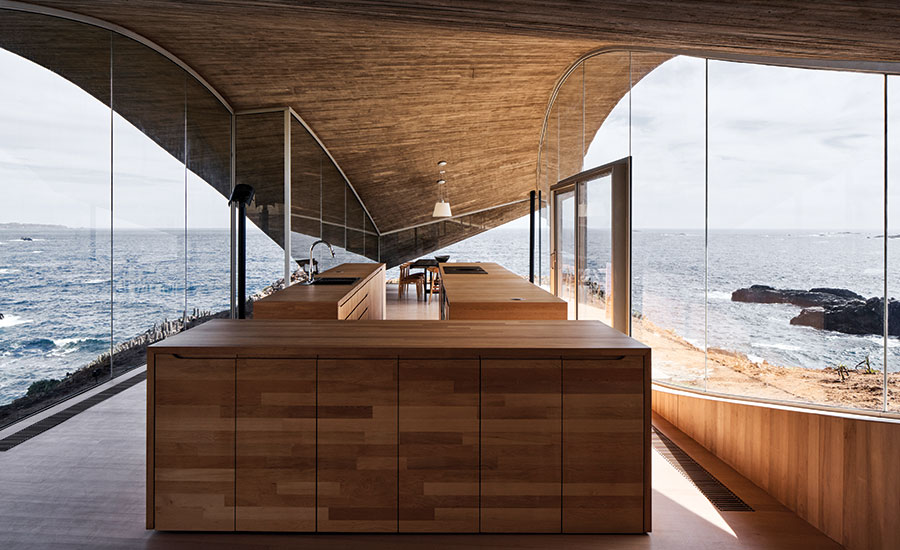 Turning this ambitious design into reality—given the farflung location and limits of the local workforce—required determination and creative thinking. To achieve the floating effect that Nishizawa desired for the roof slab, it was critical for the supporting structure to have minimal visual impact, while allowing for the needed roof thickness and seismic stability. The architects worked with structural engineers Luis Soler P. & Asociados as well as Arup Japan. The biggest challenge, says Soler’s Dario Mutoli Lopicich, was addressing the support of the curved slab’s sea-facing southwestern corner to make it appear to melt into the ground, and “avoid ruining the visual magic the architects wanted.” To do this, the team anchored a 16-inch solid steel column into a 16-foot-squared foundation (made with over a mile of rebar)—”not a common solution for a one-story structure,” he points out. A shear wall (sunk down about 8 feet) between the living space in the ocean-facing prow of the volume and the spa at its stern provides seismic stability, as do concrete retaining walls and large subterranean concrete beams that connect the house’s eight steel columns. All in all, there is a lot more steel and concrete below ground than what you actually see, says Eric Meinardus, who was the builder and executive architect (as well as the builder for Aravena’s house). 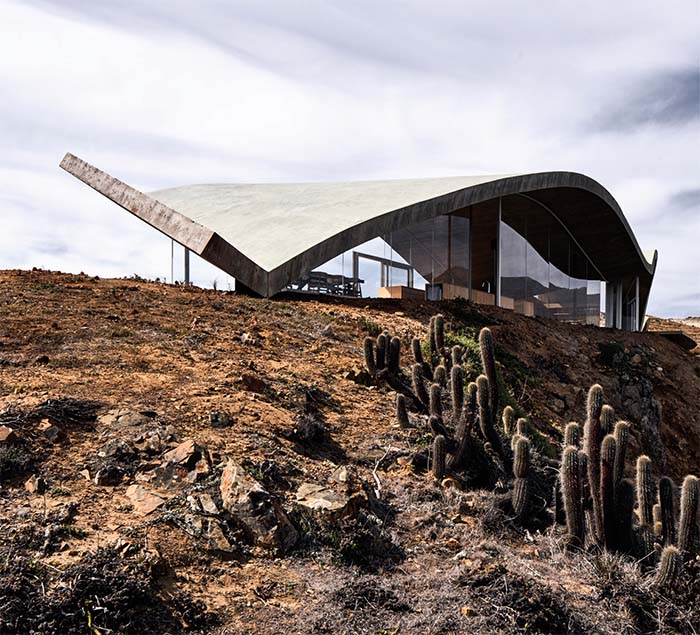 The house’s minimal composition stands up to the site’s harsh climate and vegetation. Photo © Cristóbal Palma

From a construction standpoint, the hardest part was creating the formwork for the roof. “We had a plan, but no instructions,” says Meinardus. To get the geometry right, the team took cross sections from a computer model to determine specific coordinates for each point that would require a column to support the formwork—about 1,500 in all, he says. The team mapped these points onto the ground and erected the wood formwork atop temporary steel props adjusted to the corresponding heights and welded to diagonal rebar (in case of seismic activity during the process). Pouring the concrete also had its challenges. A telescopic pump with a long arm carried the material out to the promontory; the roof was created in two pours. The large amount of steel reinforcement required by the structural engineers’ calculations helped prevent the concrete from sliding off the steep areas of the curve. Nonetheless, workers armed with buckets still had to capture the slippery material as it ran down the peaks and dump it back at the top until it cured—a low-tech but effective method. 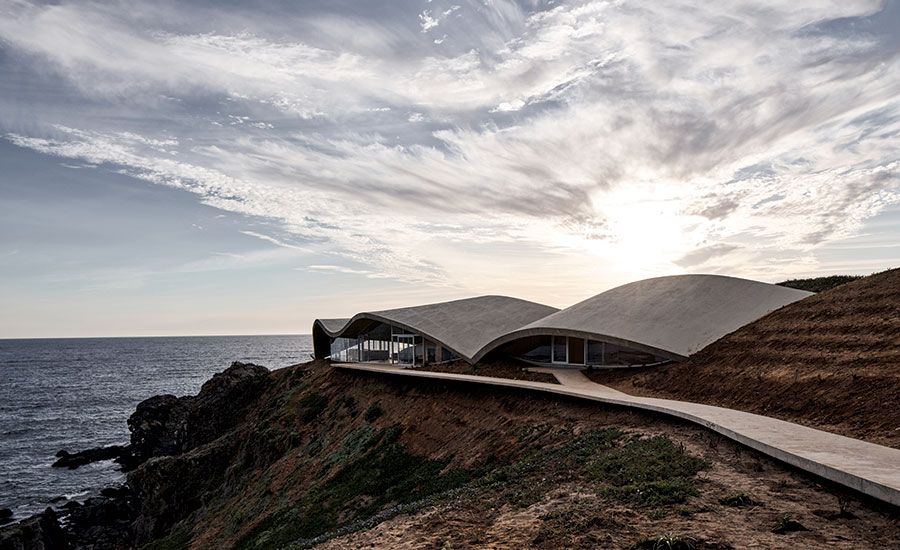 The team reduced exposure to the elements by sinking the house into the topography and adapted its shape to mitigate solar heat gain and the effect of high winds. Deep eaves further protect against the sun and the structure’s thermal mass helps with day-to-night temperature swings.

On its impossible site with its fantastical form, the Ochoquebradas house stands apart—both literally and figuratively. You have to think that this daring is due in part to the absence of an owner—the house (unlike Aravena’s or Núñez’s) has yet to be sold. This fact may also account for some of the awkwardness of the ancillary spaces, which live in the shadow of the awe-inspiring prow that thrusts you out into the elements. With Chile’s ongoing civil unrest and protests, now combined with the uncertainty associated with the COVID-19 crisis, it is a challenging time indeed for marketing such an idiosyncratic (and luxe) abode, not to mention the larger visionary project of Ochoalcubo. Moving into this precarious future, the house is a totem of optimism and a reminder of the power of an adventurous spirit. 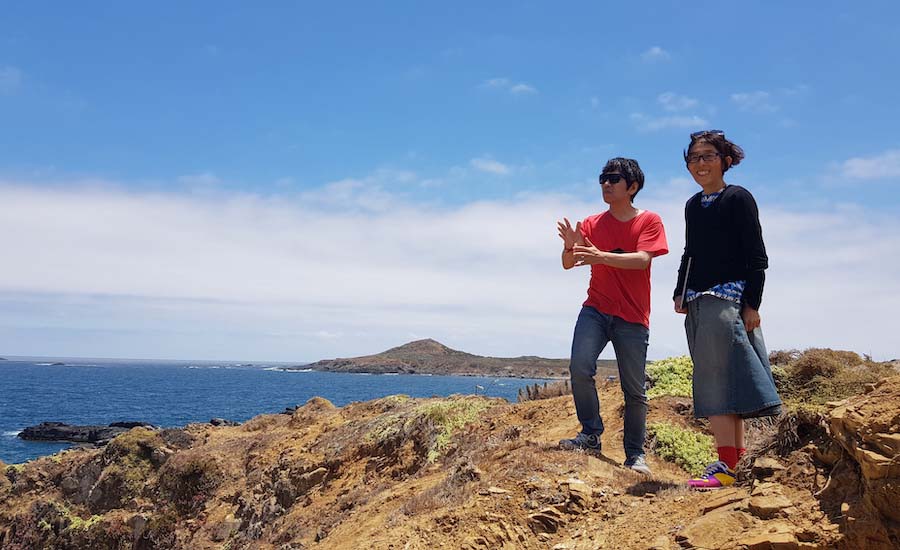 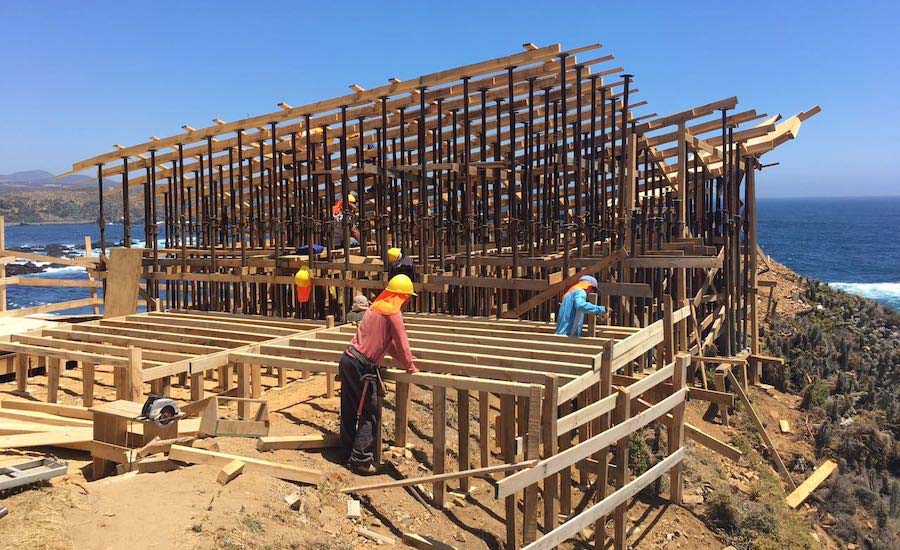 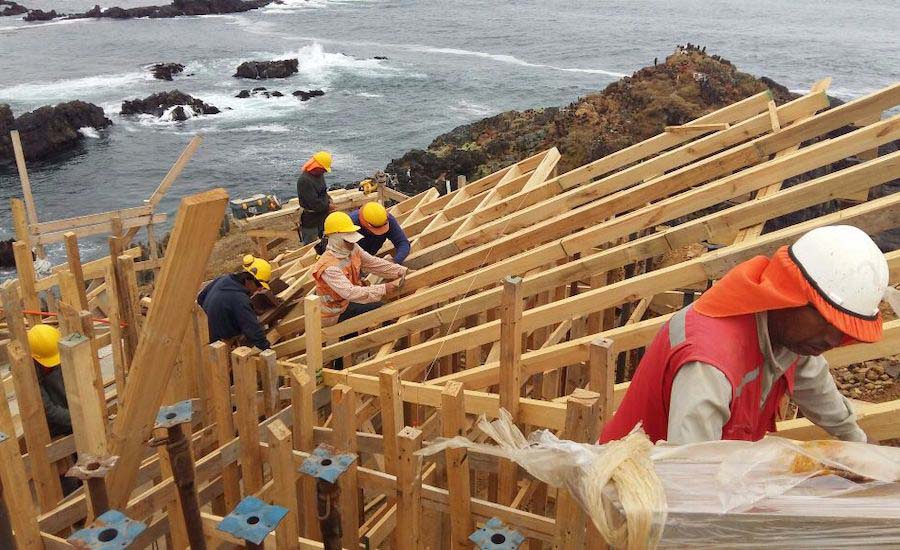 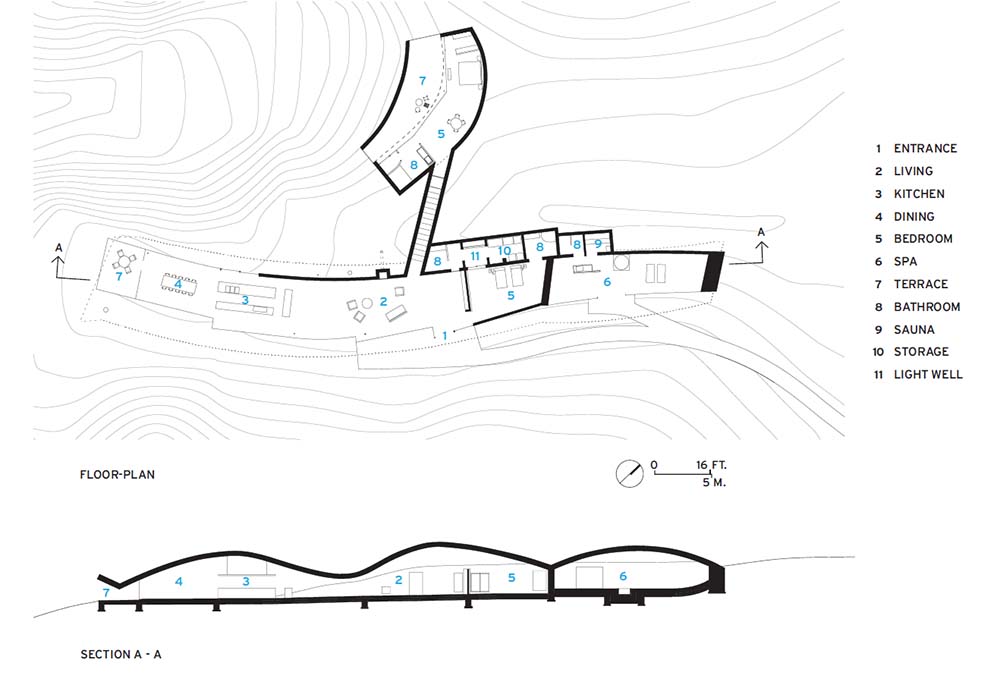