An outlier in a city associated with vast stretches of flat, sun-drenched plains, the north Dallas neighborhood of Old Preston Hollow, established more than 80 years ago, is a coveted oasis of gently rolling woodlands crisscrossed by creeks and bramble. This, says homeowner Brandie Gehan, an Austin transplant, is what attracted her to the 1½-acre parcel of land here, on which she and her husband would build a new house for their family of four.

The 10,000-square-foot, single-story residence, completed last spring, was designed by New York–and Austin–based Specht Architects to take full advantage of the wedge-shaped site, situated within the curve of a looping road and adjacent to a secluded sculpture park owned by the Nasher family. What’s amazing about the location, says firm principal Scott Specht, is, “it’s right in the middle of the city, yet you really can’t perceive any other houses.” 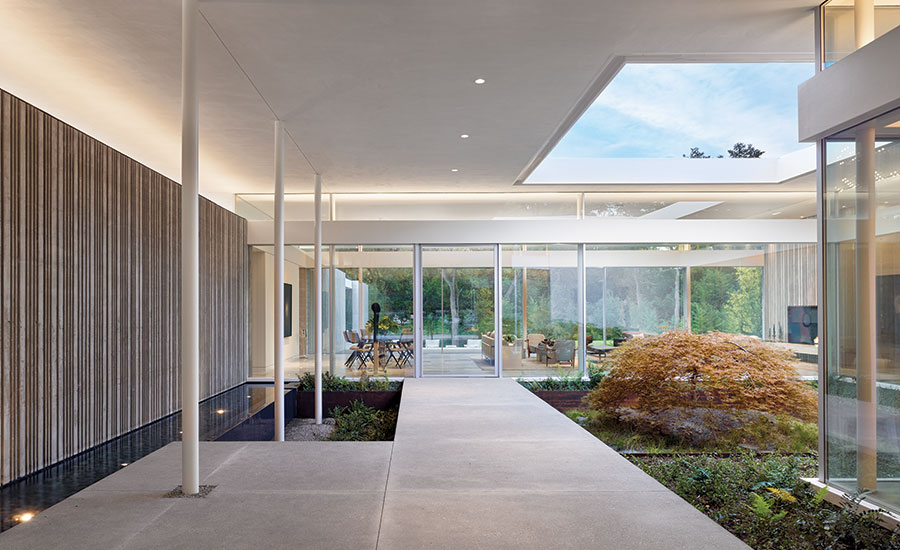 Inspired by the mid-20th century modern houses scattered among the traditional and contemporary architect-designed residences in this upscale community, Specht devised a hybrid concrete structure with steel and wood framing that stretches into the landscape with two intersecting wings, each organized around an 18-inch-thick board-formed wall. These brawny structural forms—corrugated on one side, smooth on the other—were crafted using techniques borrowed from the Brutalist era of the 1960s and ’70s, but sanded lightly after curing to achieve a 21st-century sheen. The main one, at 208 feet long, serves as a spine for the home’s public zone and runs along its north-south axis surrounded by a narrow band of water that ripples and falls gently at the front of the house, then flows into the swimming pool at the rear. (It reads as one plane but is actually interrupted by the dining room and terrace.) The other, a 122-foot-long span, supports a bedroom wing and runs along the east-west facade, sliced by an eye-level window on a hallway. 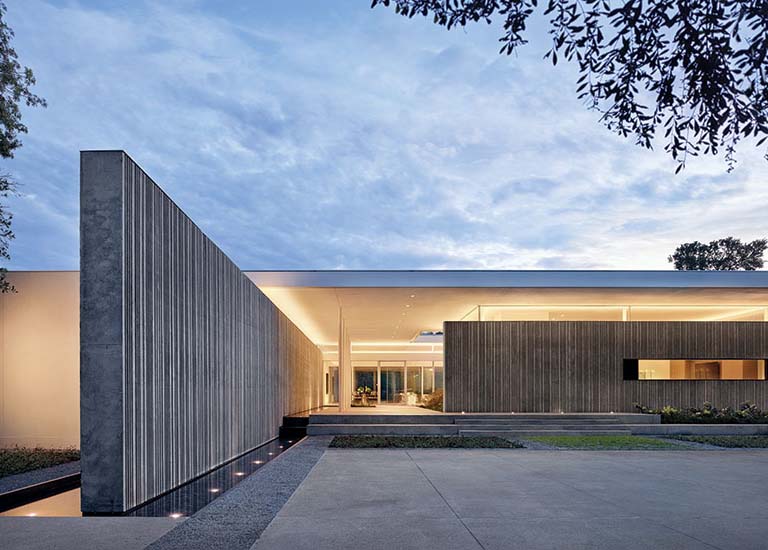 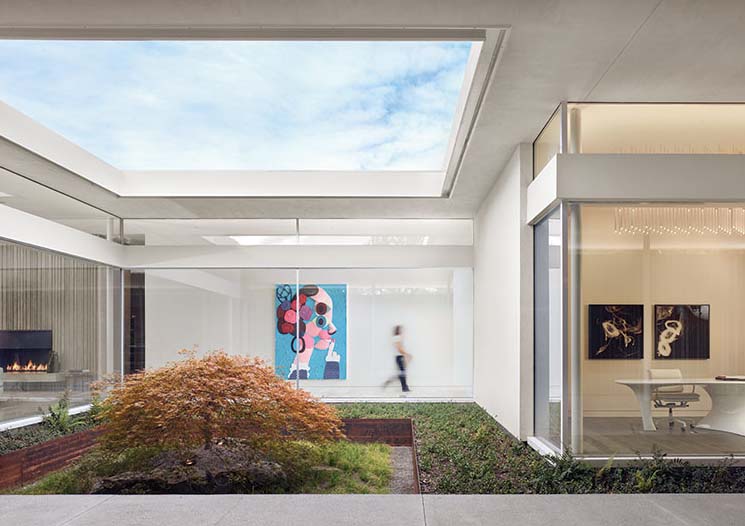 Despite the heft of the concrete, the water feature lends the house lightness, as do the use of slender steel columns, continual perimeter clerestories and a roof that seems to float above it all with a calibrated cantilever that mitigates sun penetration throughout the year. In addition, Specht clad much of the exterior in white stucco to offset the rich gray hue of the concrete.

While the Gehans gave the design team creative license, the couple did stipulate that they wanted a fluid interaction between indoor and outdoor spaces. To this end, Specht collaborated closely with landscape architect David Hocker, whose work balanced the rigid geometry of the architecture. At the street, a weathering-steel picket fence Hocker designed provides a refreshing take on a familiar form, and, while somewhat bare during a visit in February, it promises to be interwoven with increasingly lush plantings as the season and years progress, to provide a natural cover of privacy for the house beyond. 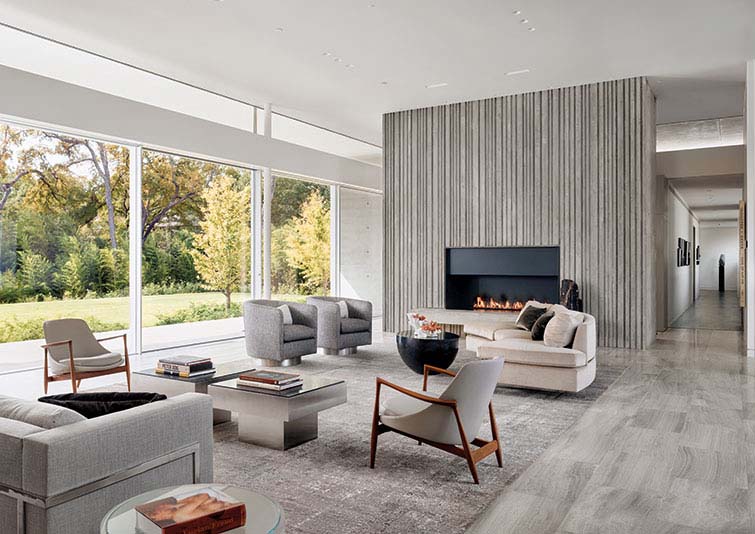 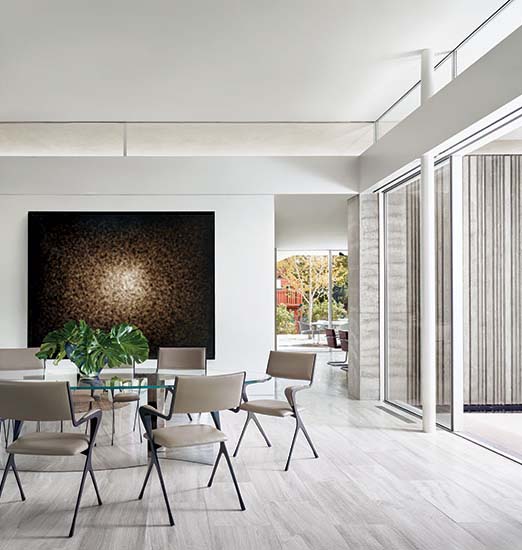 The dining area opens to a covered terrace and has views through the kitchen.

In plan, the project evokes Mies van der Rohe’s unbuilt Brick Country House (circa 1923), though Specht claims that Frank Lloyd Wright, and to a certain extent Paul Rudolph, were more of an influence on his work here, evident in the mass and texture of the building’s concrete, its extending walls, and captured fields of vision. The architect also drew from Classical and Asian design elements to create a broad, shallow stair that steps up to the entrance—an atrium, where a Roman-style impluvium, planted with a Japanese maple, captures rainwater used for irrigation. The house opens here, literally and visually, with fixed glazing that reveals large daylit rooms for living, working, and entertaining. These are washed in a neutral palette that beautifully frames an “event” lawn (large enough for sports and activities) and the landscape beyond. Operable glass walls in most of the rooms enable the desired indoor/outdoor lifestyle and provide natural air movement when the weather permits. The dynamic interior, with decor by Los Angeles–based Magni Kalman Design, flows from a central living and dining area into the west wing, which houses kitchen, office, and service areas, or into one of two halves of the east wing that branch off of it—on the south, the master suite and gym; and on the north a media room, children’s bedrooms, and guest suite. 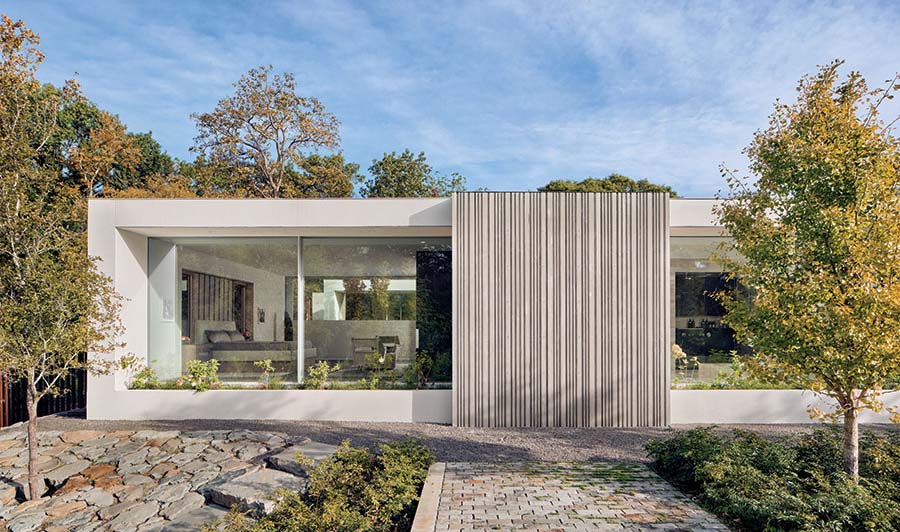 On the south side, sections of textured cast concrete reappear to support the mastersuite elevation. 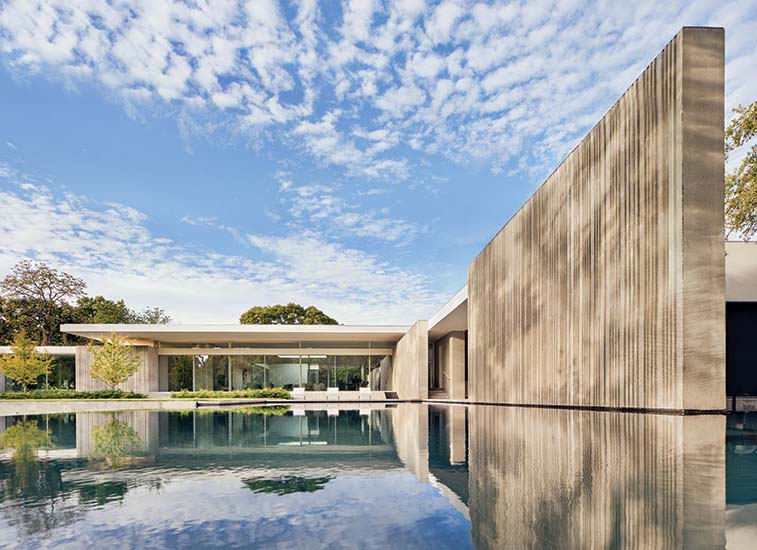 The roof cantilevers out over the terrace, calibrated to mitigate sun penetration indoors, and the spine wall slices through the infinity swimming pool from the back of the house.

Corridors—and even the garage—frame tall, controlled views out to slender strips of water and greenery. “The site itself is almost dead flat, but drops off steeply at the rear,” explains Specht. To maximize its potential, Hocker terraced the back of the yard with retaining walls and, in one particularly effective move, worked with the architect to align the pool along the spine wall (instead of across the grass as originally intended), extending it toward the steep gradient with a dramatic infinity edge. This made room for the expansive lawn, flanked by sections of locally sourced sandstone boulders and rocks, that steps down the hill more gently and leads to a gravel-lined path that rings the house, among native plants and an arching bamboo canopy. It’s a very manicured and formal design, according to Hocker, with the architecture dissolving into these landscape elements, which in turn transition into the surrounding woodlands.

“The landscape is a big part of this house,” says Specht. But it's also much more than that. As a result of a felicitous working relationship between architect and landscape architect, the project's built and natural environments coalesce into a single, holistic entity. 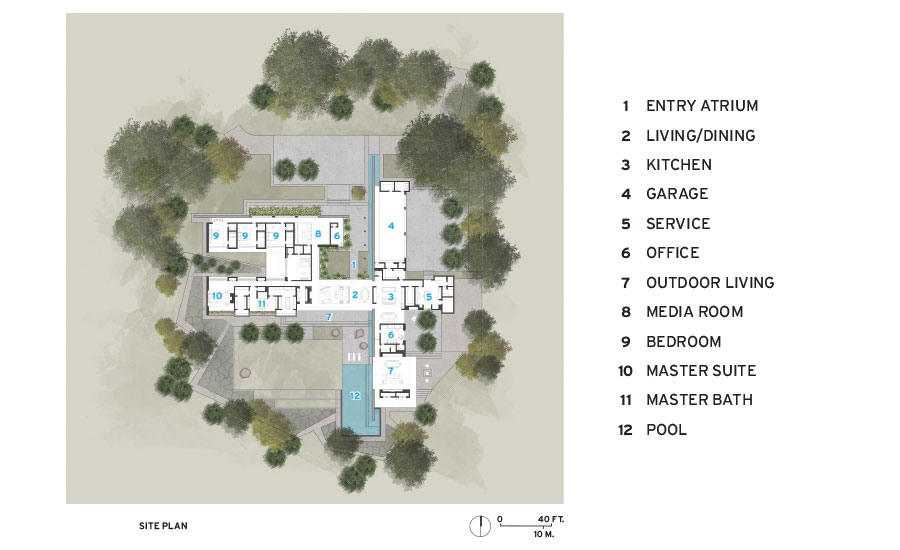