“I’ve always been that kid who would rather be outside than inside,” Tom Kundig says. This explains why the Seattle-based architect of the firm Olson Kundig—an avid mountain climber—was so excited by his first commission in Brazil. His clients, a couple, wanted an intimate home, as small as possible for themselves and their dogs to enjoy a spectacular property high in the mountains of the Tijuca rainforest near Rio de Janeiro. “These clients would rather be outside, and I felt a real kinship with that agenda,” says Kundig. 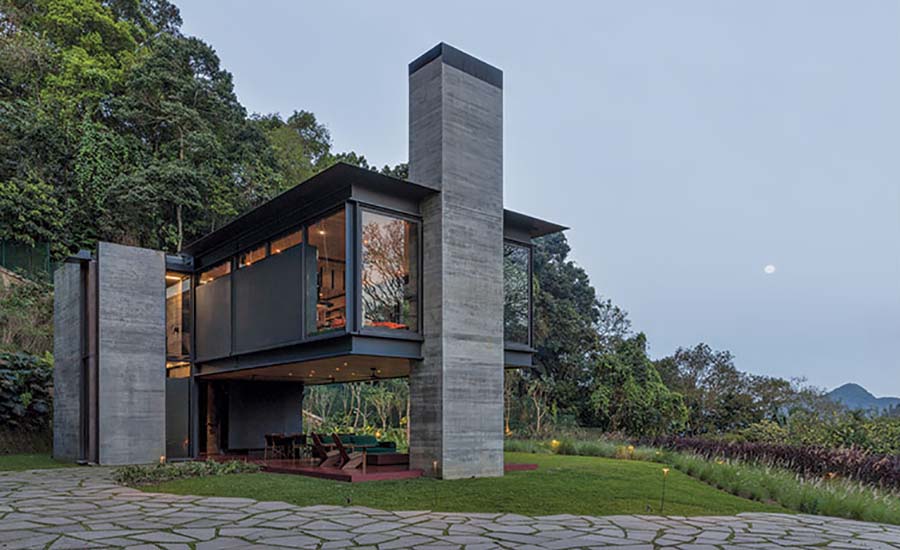 board-formed concrete encloses the elevator and staircase on its west side. Photo © Maíra Acayaba, click to enlarge.

To enhance the dialogue between the building and its setting, the architect decided to elevate the structure. The rectangular steel-and-glass volume, just 1,500 square feet in size, is lifted above the ground and supported on two poured-in-place board-formed concrete piers (one of which contains the fireplace at the house’s south end; the other, at the center of the plan, accommodates the bathrooms and storage). The concrete, seen often in Brazilian architecture, also is used to enclose the elevator and a steel and wood staircase protruding from the west elevation.

The steel framework, which includes perimeter beams extending the length of the house, supplemented by cross beams and columns, forms a linear box that emerges like a promontory from the steep hillside at the rear of the three-acre property. Because of the forest’s humidity, the architects selected a corrosion-resistant marine-grade stainless steel as the main material. Little used in Brazilian residences, it is strong and light enough to foster a sense of elegant simplicity. 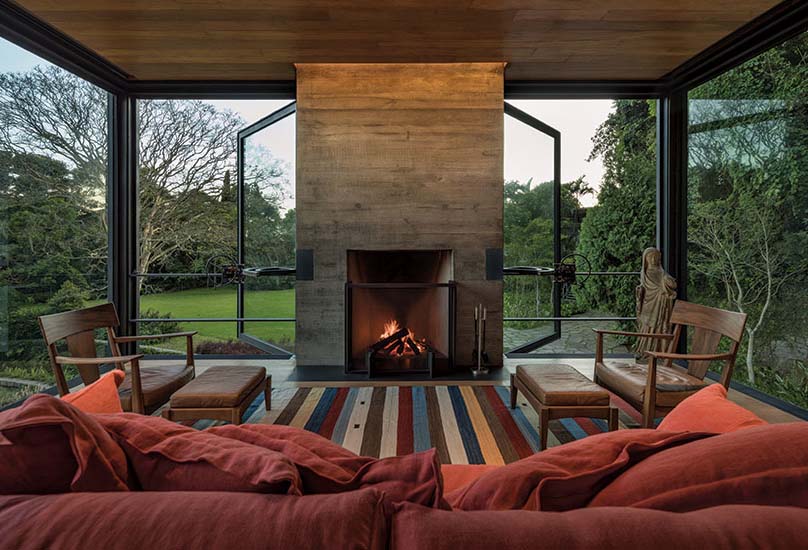 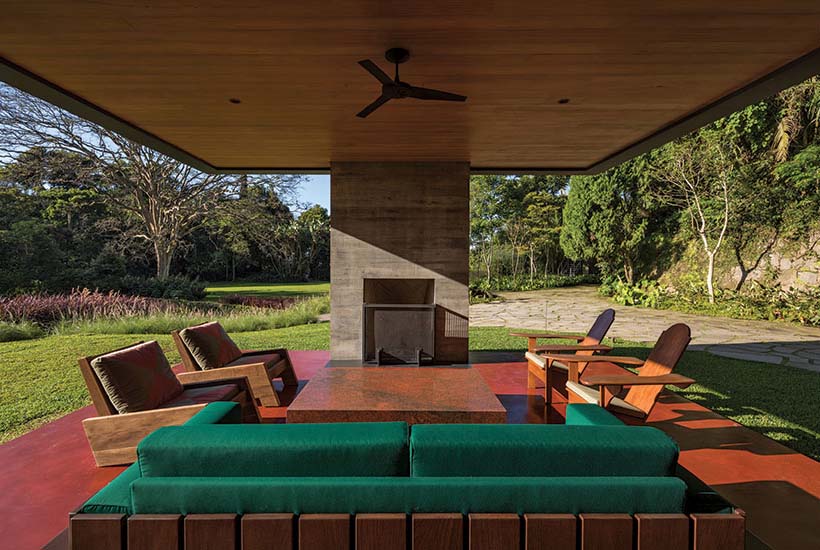 A chimney, located within the structural pier at the south end of the house, serves two fireplaces: one in the living room of the upper story (1) and another on the ground-level screened porch (2). Photos © Maíra Acayaba

Extensive glazing (with bird-protection glass) means that a spectacular setting is present wherever you are in the house. On the west is a jungle canopy; on the east, the glass window-walls frame stunning vistas of the Tijuca National Park. Standing there, you have the feeling of floating in the park’s lush splendor. The large panels are retractable in some cases, or can manually pivot in others. Breezes flow through the house, and hot air is siphoned off by a roof hatch on the stair block. “By lifting the structure, you are actually pulling it away from some of the insects and humidity,” notes Kundig. “We are picking up on traditions of our ancestors.”

On the main level, the architect placed the single bedroom on the north, closest to the hillside. At the opposite end is the living/dining area, oriented toward the fireplace, where the room’s glazed corners open up views of the landscaped garden and the Atlantic Ocean. Because corridors run the length of the house along both the north and south edges, you can stand in the bedroom and see the ocean to the south. 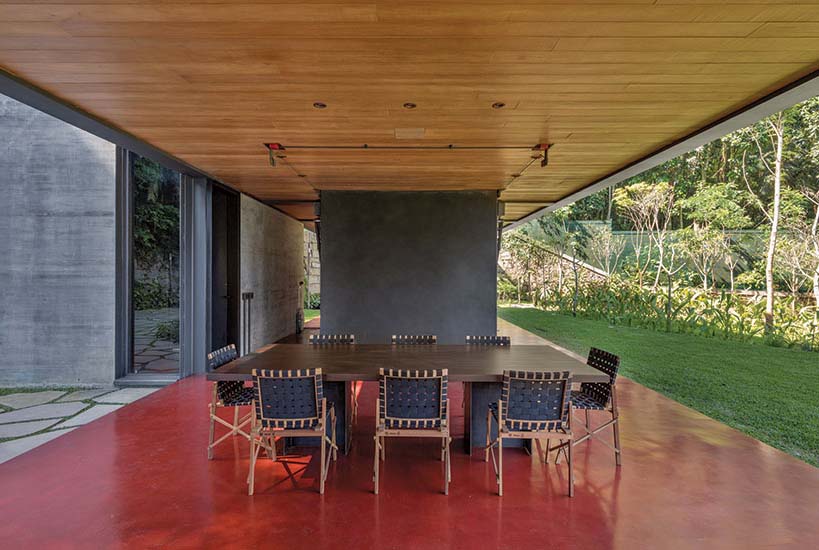 Open to the landscape, the ground-level living and dining area (3) connects with the main level via an enclosed staircase and elevator (4). Photos © Maíra Acayaba 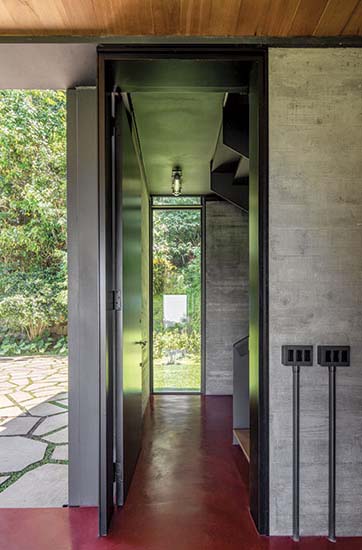 Below the main level is a generous covered patio with its own kitchen that creates a well-proportioned outdoor living area. A vermelhão-stained concrete covers the patio’s floor, whose deep red color recalls Brazil’s iron-oxide-rich soil. Another local touch is the warm Brazilwood appearing on the patio’s ceiling, as well as on the walls, ceilings, and shelves of the main level. In typical Brazilian fashion, many interior walls are terra-cotta block with a plaster finish. With this mixing of local and foreign elements, Kundig has created a home that sits very lightly on its land, fulfilling his clients’ desire for an intimate living space from which to enjoy the magnificent natural setting. 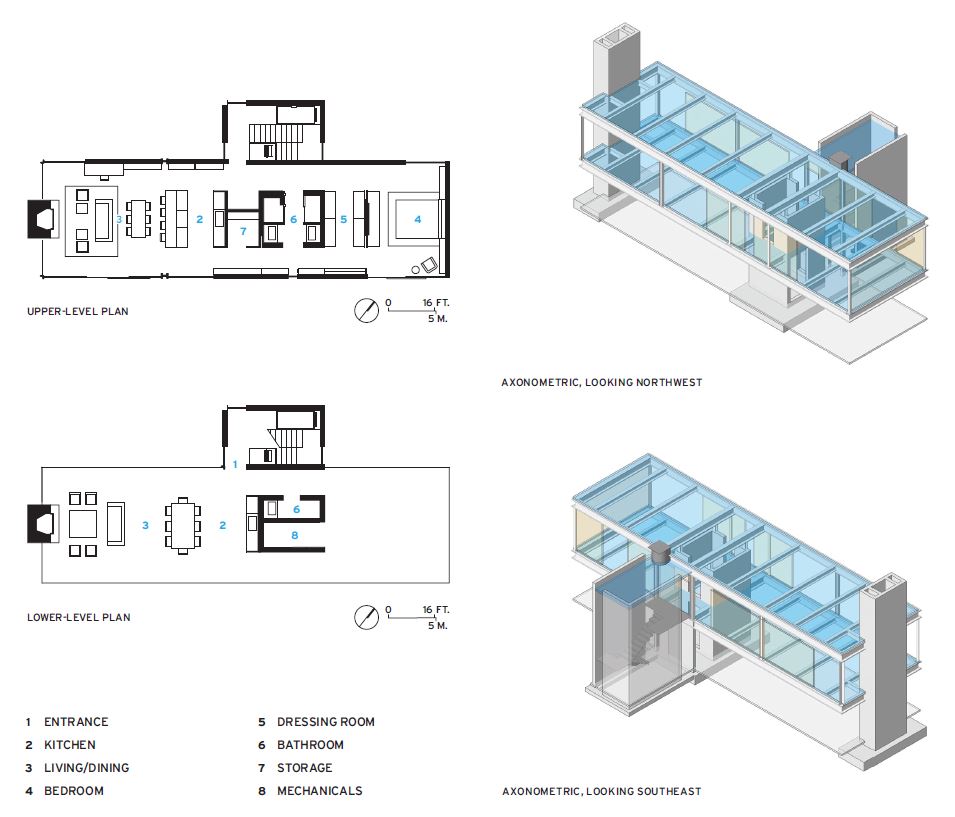