Why would a talented architect like Berkeley-based Gregory Faulkner turn to the celebrated Seattle architect Tom Kundig to design a house for himself and his wife, Lesa? And why would Kundig get involved in a house for another architect? The answer lies in the process of collaboration.

Faulkner began thinking about this notion when he and Lesa stayed at Peter Zumthor’s Swiss spa, Therme Vals, some years ago. Zumthor was there as well, and Faulkner enjoyed talking with him over the next several days; it made him wonder what it might be like to collaborate with another architect. 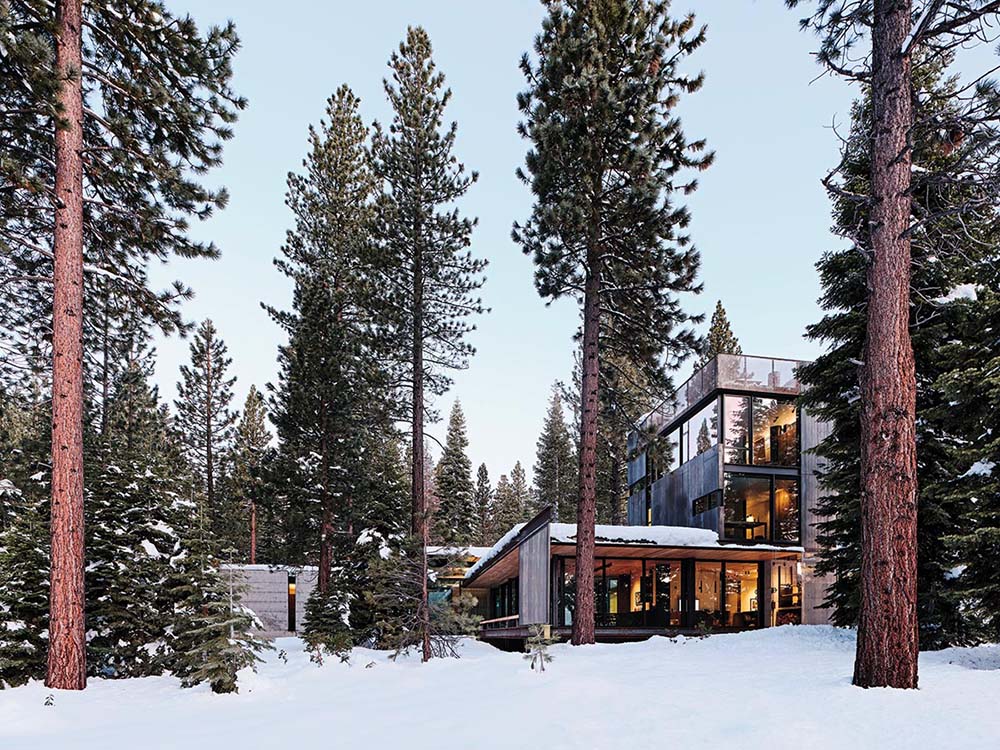 Spare and easy to clean, the house is located among Ponderosa pines. Photo © Joe Fletcher, click to enlarge.

Later, the Faulkners bought 2.5 acres in a Ponderosa pine forest near Lake Tahoe, California. The couple knew the area; Faulkner has a second office in nearby Truckee, where he designed several houses. Lesa, a designer, runs the interiors department at the firm.

After Faulkner heard Kundig give a talk at the Museum of Fine Arts in Reno, he asked Kundig about designing his own house, where he would be a collaborator as well as the client. “Tom was all in,” he says.

Kundig, founding principal of Olson Kundig, recalls, “I knew who Greg was, so I definitely had a sense of ‘This is going to be interesting!’ To be under the scrutiny of a terrific architect who’s been delivering great work is no small task. Greg and I are both old enough to be mature and confident in our voices and ability to work together as designers. But I was nervous.” They began meeting and trading sketches, while the Faulkners staked out the site to determine the proper orientation of the house for views and circulation.

After 18 months of design development (with Olson Kundig’s Steve Grim as project architect), they had conceived a 5,420-square-foot house. Kundig calls it “one of the most satisfying architectural conversations I’ve been involved with.” The plan “is almost like a hike through the forest,” Kundig adds, since the pines are very close to the house. (Only five were removed.)

The Faulkners placed the various rooms along an extended U-shaped interior corridor, with the main bedroom at the far end, for privacy when the couple’s six children—ages 19 to 35—and one grandchild come to visit. Their bedroom adjoins the living room and sits across an open courtyard from the wing containing the garage and the bunkroom. Linking the two volumes at the bottom of the U is the entrance, dining room, breakfast room, and kitchen. A 42-foot-tall steel-sheathed tower above the breakfast room contains two bedrooms and a roof deck with a firepit. 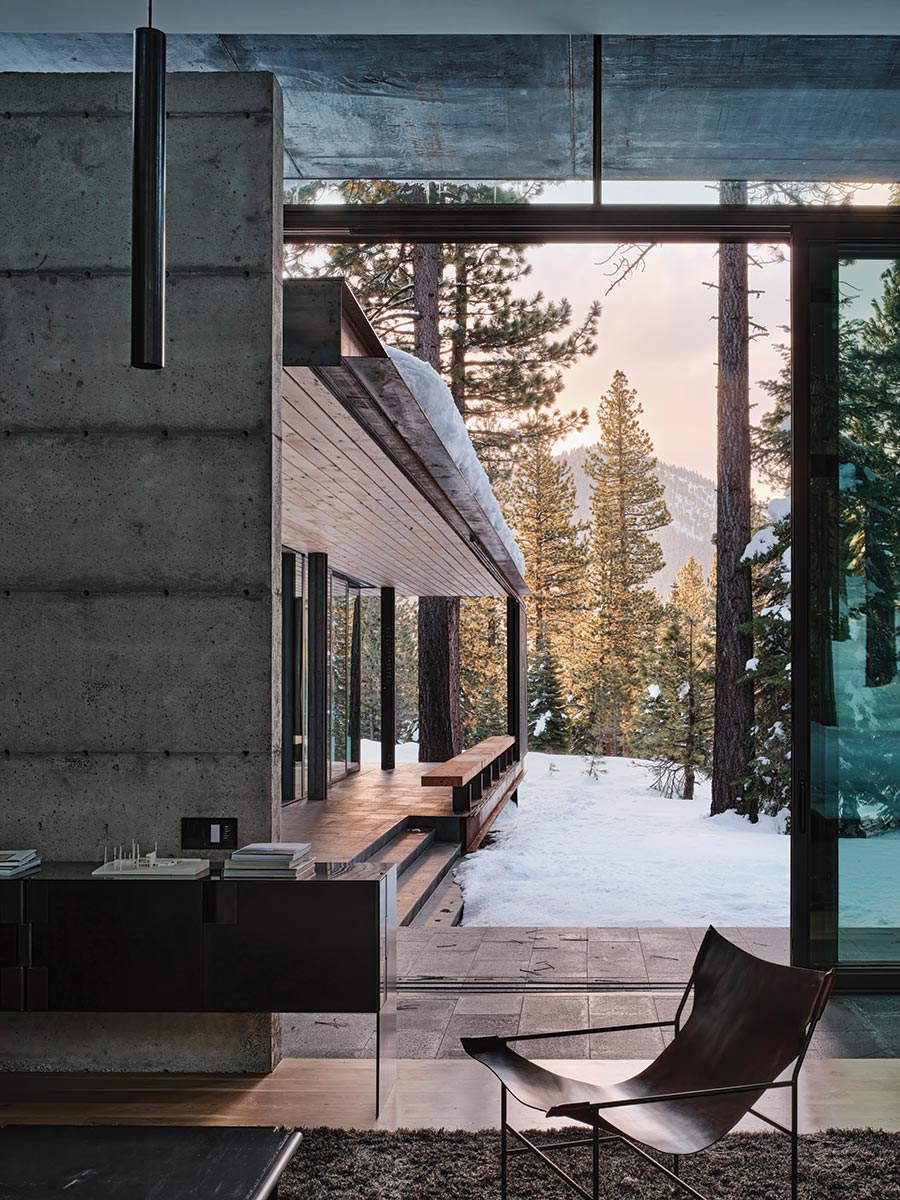 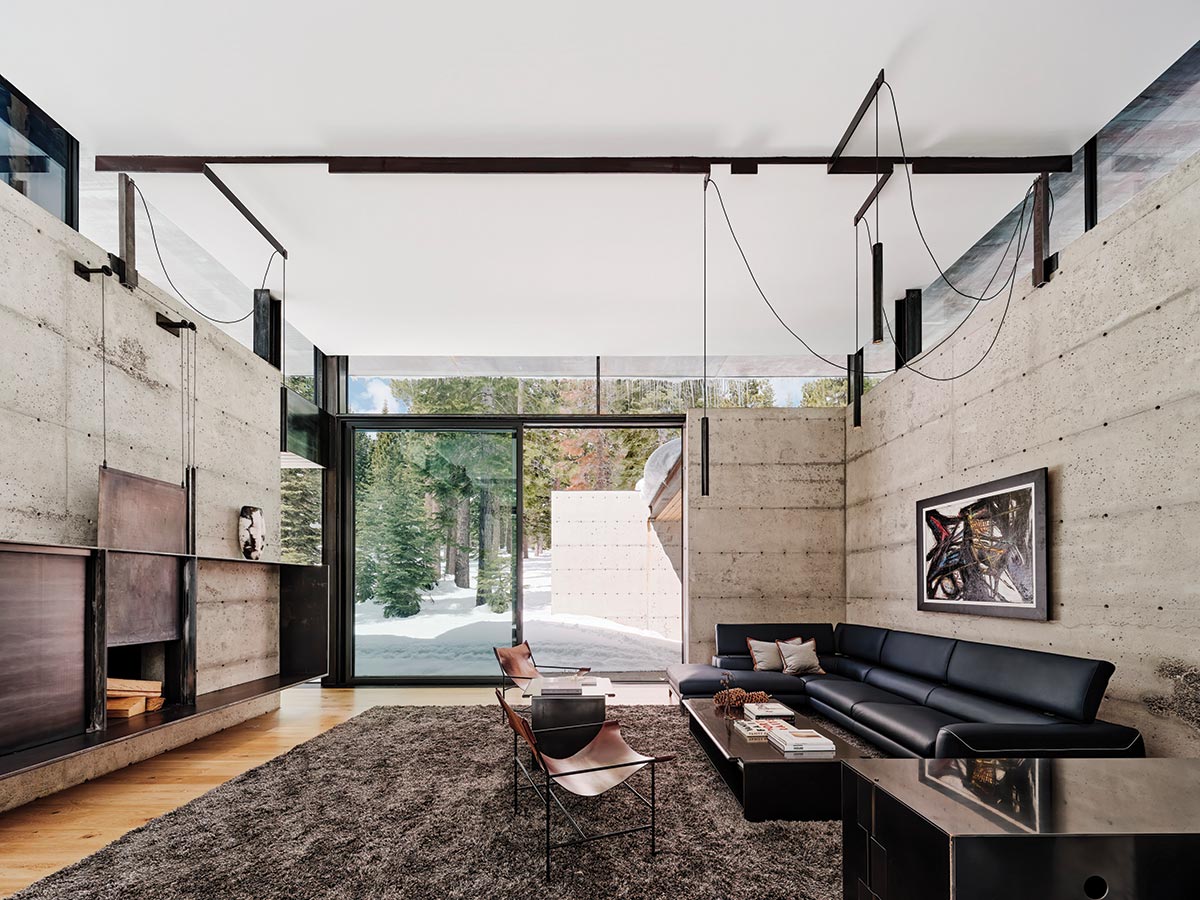 The living room, detached from the dining pavilion (1), has poured-concrete walls and an acoustical plaster ceiling (2). Photos © Joe Fletcher

True, the plan is attenuated. (Lesa Faulkner says she wanted breakfast to be a “journey” from the bedroom, because that morning walk is when she collects her thoughts.)

The entry, which you reach after walking along the interior corridor past the garage wing, is halfway around the courtyard. Still, placing the living room away from the cooking/eating area and next to the main bedroom suite seems unusual. 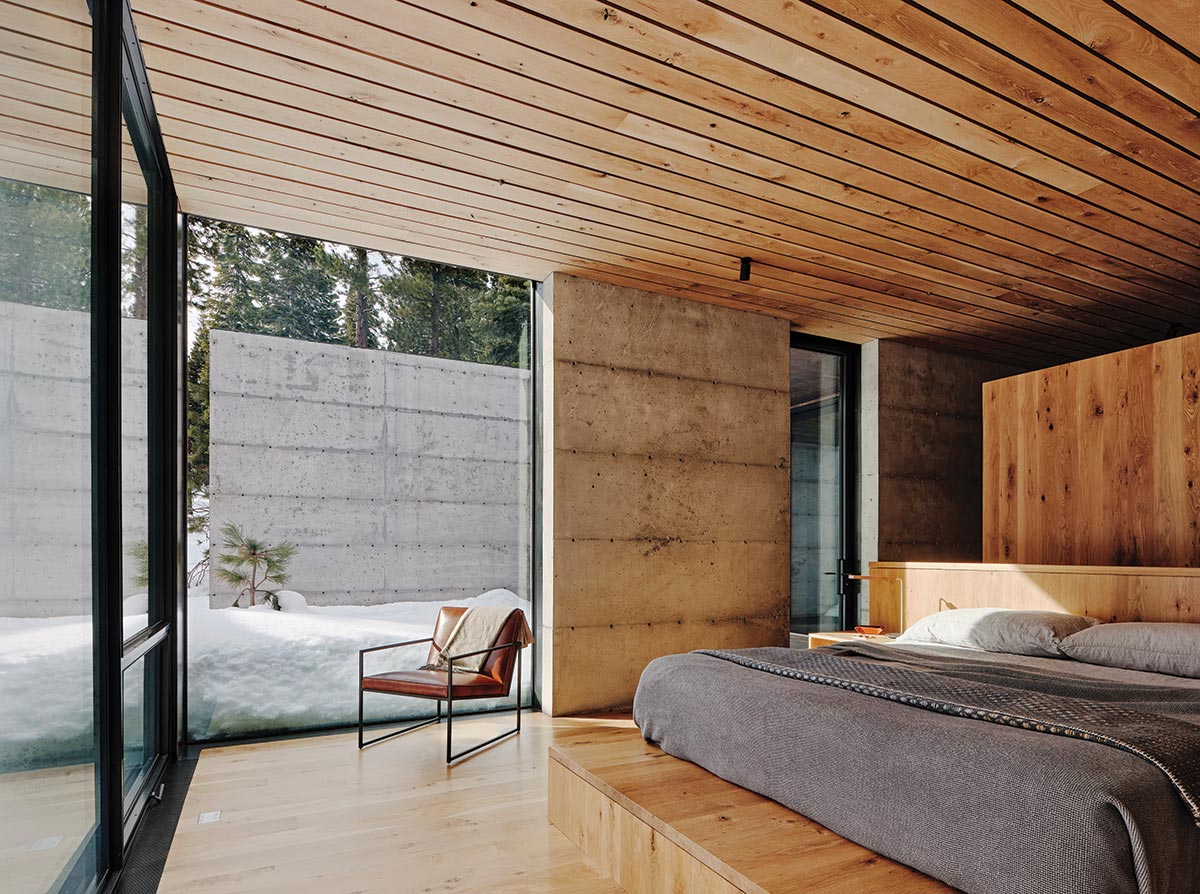 The main bedroom is lined with oak. Photo © Joe Fletcher

“This building is like playing billiards: it bounces off the existing context, so you experience moments in the forest,” Kundig says. Sliding glass doors, floor-to-ceiling windows, and poured-in-place concrete walls frame calculated views.

With concrete walls and steel framing, the house is geared to be as fire-resistant as possible. In designing the interior, Lesa commissioned elegantly detailed steel tables, cabinets, light fixtures, a fire screen, and door hardware from Kundig’s metal-fabrication shop, 12th Avenue Iron, in Seattle.

The collaboration proved successful. “Tom’s an architect’s architect,” Faulkner says. “It is all about the work, with no real exposed personal ego. It was really a fifty-fifty team effort.” Adds Kundig: “Greg is the kind of architect who does it all from beginning to end.” The two have named it the Analog House, because, Faulkner says, “it’s more about the form and light and space and less about digital technology and gimmickry.” 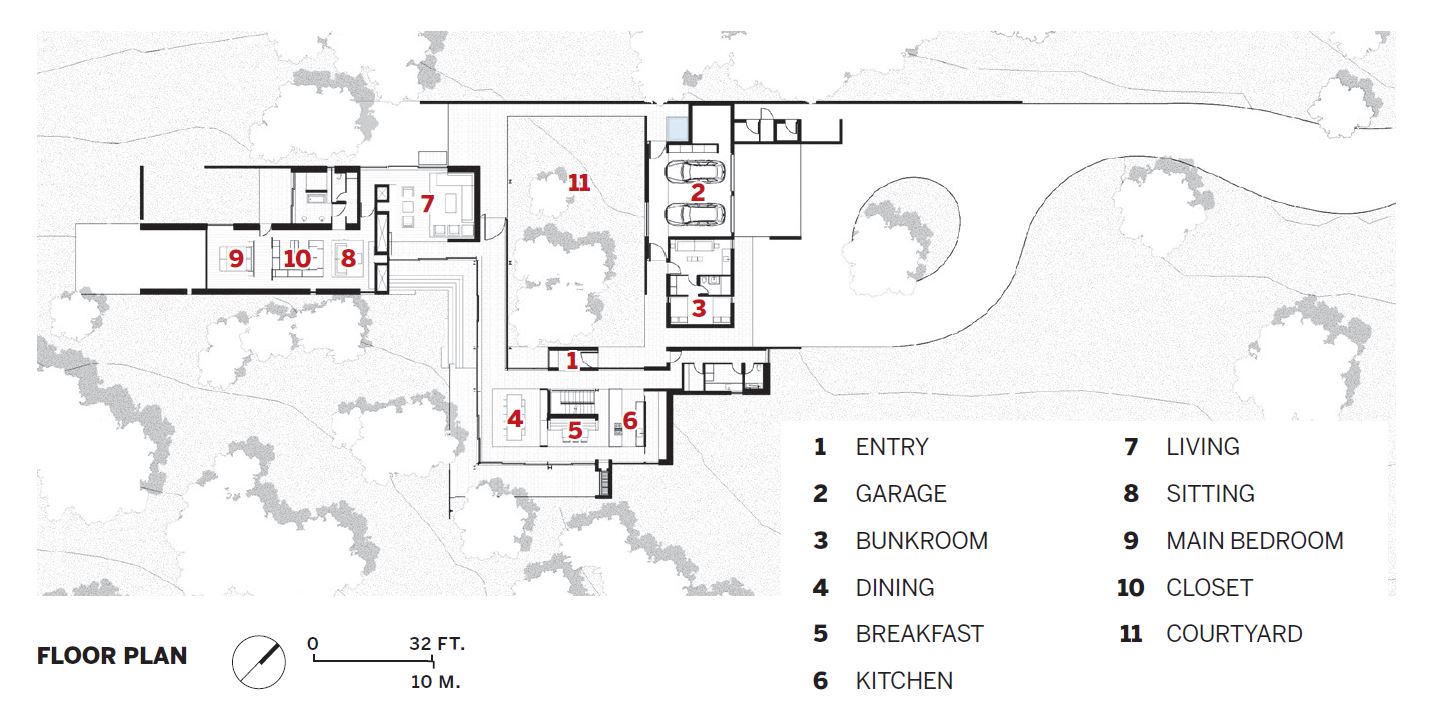 Listen to our podcast in which Tom Kundig and Steve Grim of Olson Kundig join Greg and Lesa Faulkner of Faulkner Architects to discuss the concept and design of Analog House.