One Embarcadero Center Lobby by Gensler

John Portman is known for the mixed-use complexes that transformed the downtowns of several American cities in the second half of the last century. The architect, who died in 2017 at the age of 93, had a peculiar brand of inward-looking urbanism that combined office space, retail, and hotels (often with thrilling atria) in interconnected, multi-building developments. The most famous such “city in a city” project is Peachtree Center in Atlanta, where his practice was based. In San Francisco, during the 1970s and ’80s, he completed Embarcadero Center, a Brutalist ensemble in the city’s financial district—initially developed by Trammell Crow and David Rockefeller—that grew to encompass nearly 10 acres, comprising five office towers and two hotels, on top of a shopping mall. 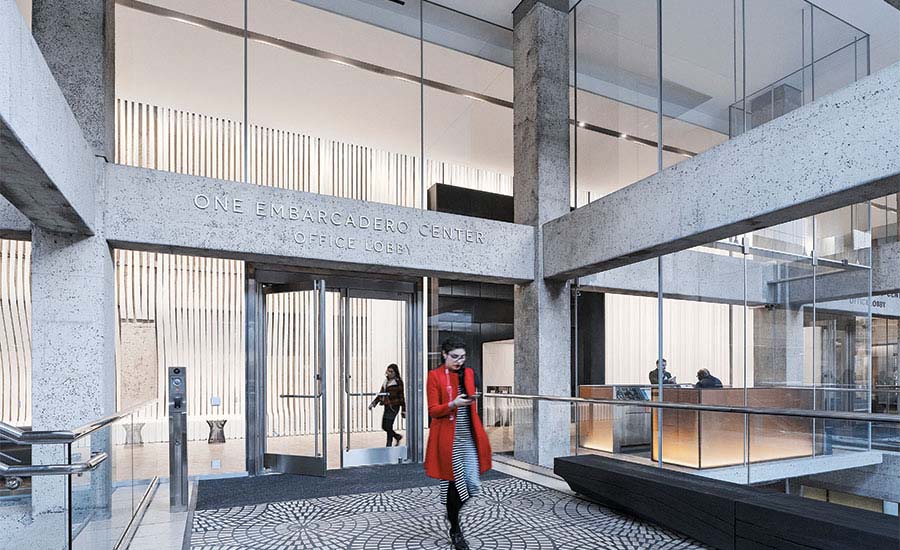 The growth rings in the new end-grain wood-block floor (top) echo the circular pattern of the tiles (above) found throughout Embarcadero Center. Photo © Joe Fletcher, click to enlarge.

A consequence of Portman’s insular approach is a sometimes confusing and uninviting entry sequence for the individual buildings that make up his developments. Such was the case for One Embarcadero Center, completed in 1971, and the first tower built at the complex. The 45-story office building had a minimal-size lobby, with just enough space carved out of its central core to provide elevator access. The entrance was almost hidden, raised off the street on the second level of the three-story retail podium it sits on. There was no waiting area for visitors and little security, with no control of who entered the building.

The curvaceous ribbons, triangular in plan (1, center and right) are spaced about 1 inch apart, allowing glimpses of the core and its columns and beams beyond (2). Though each of the 230 undulant elements appears unique, there are only about 20 distinct shapes (1, left). Photo 2 © Joe Fletcher 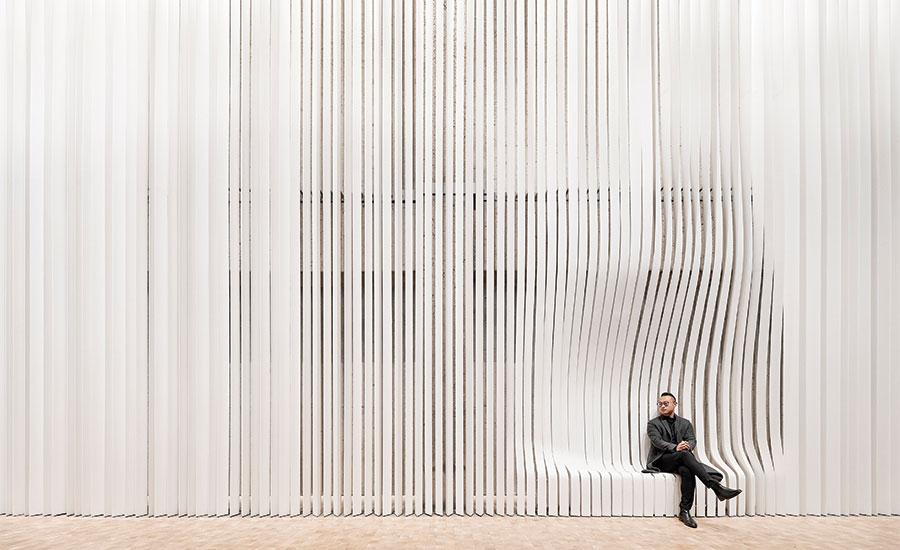 These problems have been remedied with a revamp by Gensler for Boston Properties, the owner of the complex’s four primary towers. (Gensler-designed renovations of the real-estate firm’s other three Embarcadero Center buildings are currently under way.)

For the recently completed project, Gensler first stripped away extraneous elements added in a 1990s renovation by Portman’s own office, including an imposing barrel vault that had “Postmoderned up”—and further cluttered—a space already congested with a “forest of concrete columns and beams,” says Doug Zucker, Gensler’s principal in charge of the project. Zucker and his colleagues next created a capacious waiting and reception area by claiming additional real estate in front of the core, within the retail podium. They defined the new 25-foot-deep and 96-foot-long space with a pristine, mullionless glass curtain wall. They also made the lobby easier to find for first-time visitors by removing escalators that had connected the second and third retail levels but obscured the entry, replacing them with a stair off to one side. 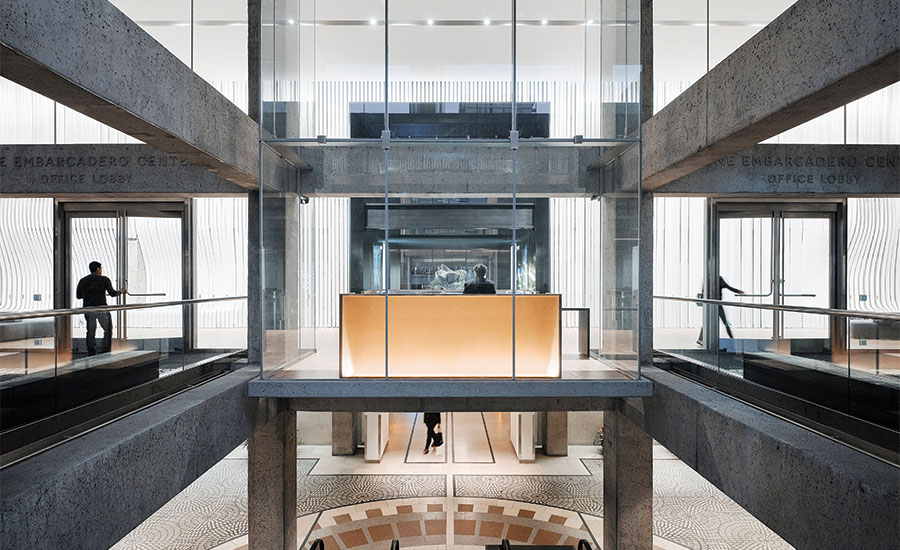 Now that a set of escalators has been removed, the lobby is newly visible within the retail podium (3). Black glass-paneled walls and a black terrazzo floor (4) in the zone beyond the security turnstiles provide a contrast to the lightness and delicacy of the GFRC ribbons. Photos © Joe Fletcher 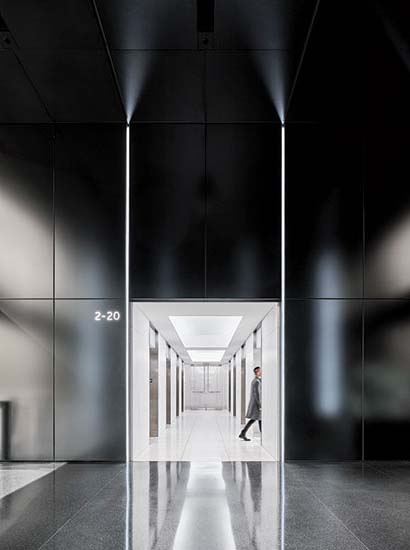 These moves are both clever and practical, but what makes the project stand out is Gensler’s strategy for camouflaging the building’s core. The design team enveloped it in a veil of glass fiber reinforced concrete (GFRC) “ribbons” that extend 23 feet from the floor to the ceiling. They bend and curve to create the impression of a curtain, and near the bottom transform into benches. The elements, V-shaped in plan, with a 1 ½-inch-diameter steel pipe concealed inside for reinforcement, are spaced about 1 inch apart, screening the core beyond but providing glimpses of it between the narrow gaps. In some places the existing columns surrounding the core protrude from the sinuous veil, revealing the shared qualities of the ribbons and the original concrete. “The GFRC has crispness and warmth, and you can see the aggregate,” says Batya Keshet, Gensler design director. “It felt right for this building.”

Although each of 230 ribbons appears unique, there are only about 20 distinct types. The shapes were developed with various computational tools and studied in virtual reality and with full-scale mockups. The architects and the local fabricator, Concreteworks, passed the digital files back and forth for refinement before molds were CNC-milled from rigid foam and then cast in GFRC.

The ribbons are, of course, solid and immovable, but the lighting scheme dematerializes them, helping them to appear soft and fluid. In addition to illumination from behind, lights concealed in a cove at the ceiling’s edge and spots inserted in a slot running down its center wash the ribbons from above, making the installation glow.

In juxtaposition to the delicate and undulant GFRC, the architects have created a muscular 19-foot-high steel portal to mark the access from the lobby to the elevator bank. The secure zone beyond—newly protected by turnstiles—has walls clad in black acid-etched glass. The darkness of the walls in this 16-foot-wide, 37-foot-long space, which Zucker refers to as a “sleeve,” focuses attention on its far end—now opened up with clear glazing that brings in daylight and provides previously obscured sight lines to the streetscape outside.

This new visibility, the combination of darkness and light, and the contrast of rippling and orthogonal, represents more than a skillful resolution of functional challenges. At One Embarcadero, Gensler has created an entry sequence that is lively and gracious. 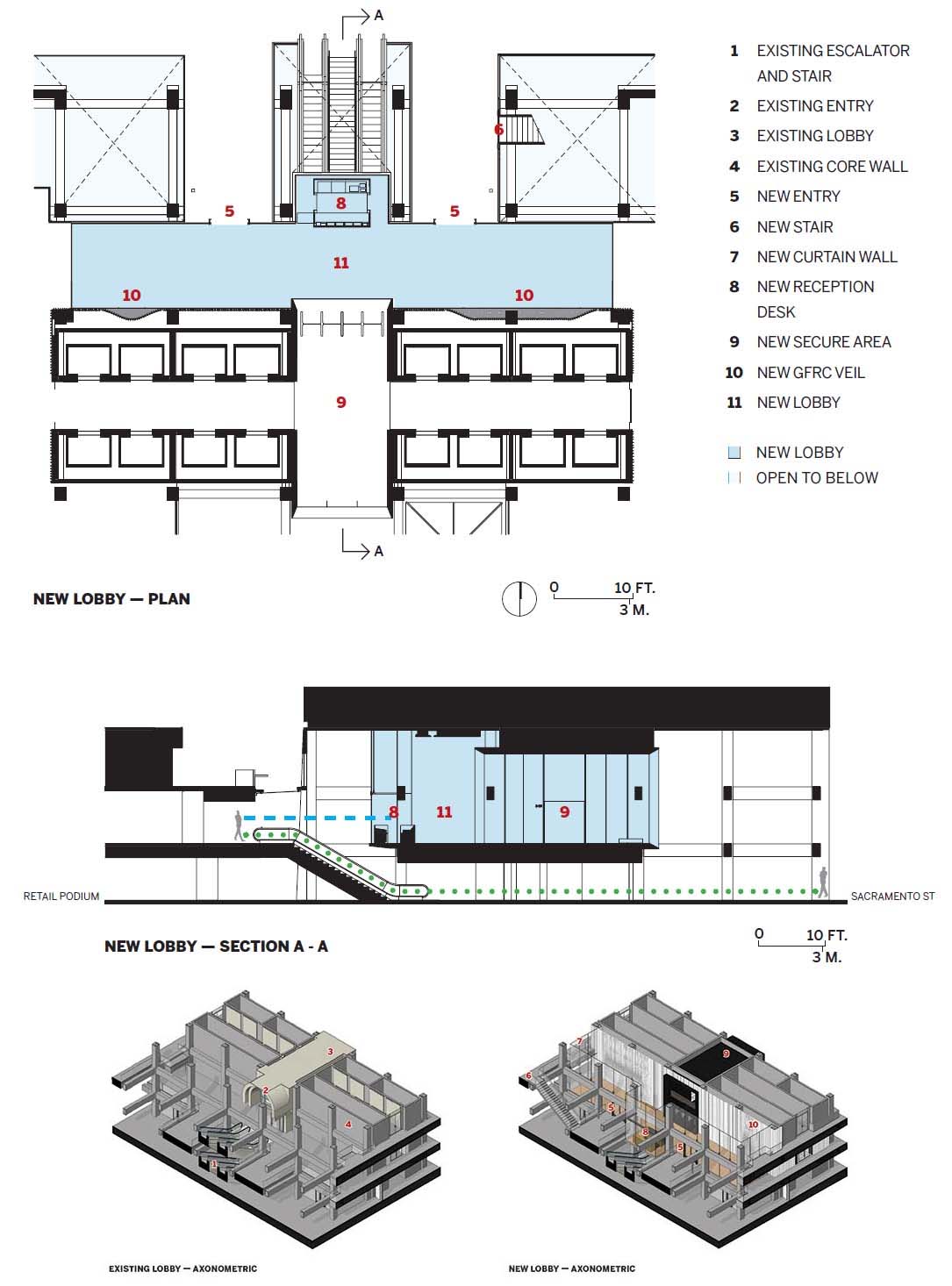