As the Walton family continues to develop its Walmart corporate base in Bentonville, Arkansas, it has been investing in community and cultural resources to boost commerce and attract a talented workforce. This became most apparent in 2011, when Alice Walton, daughter of Walmart founder Sam Walton, opened the Crystal Bridges Museum of American Art on 120 acres of woodland and creeks. Designed by Moshe Safdie to display a vast collection, this popular destination has since hosted nearly 5 million visitors. 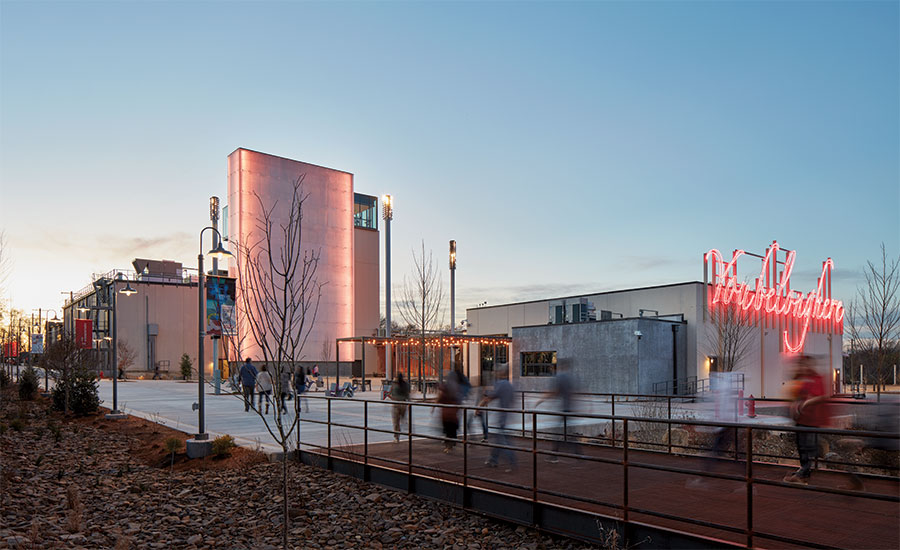 In a similar spirit, a trio of younger Waltons—her nephews Steuart and Tom, and Tom’s wife Olivia—spearheaded the conversion of a Kraft cheese plant in Bentonville’s downtown to create a dynamic satellite for Crystal Bridges that offers a mix of visual, performance, and culinary experiences for a growing millennial audience. The Momentary, as it is called, is located only about a mile and a half downstream from its parent museum and will co-curate some exhibitions. But the urban offspring definitely has a flavor of its own. 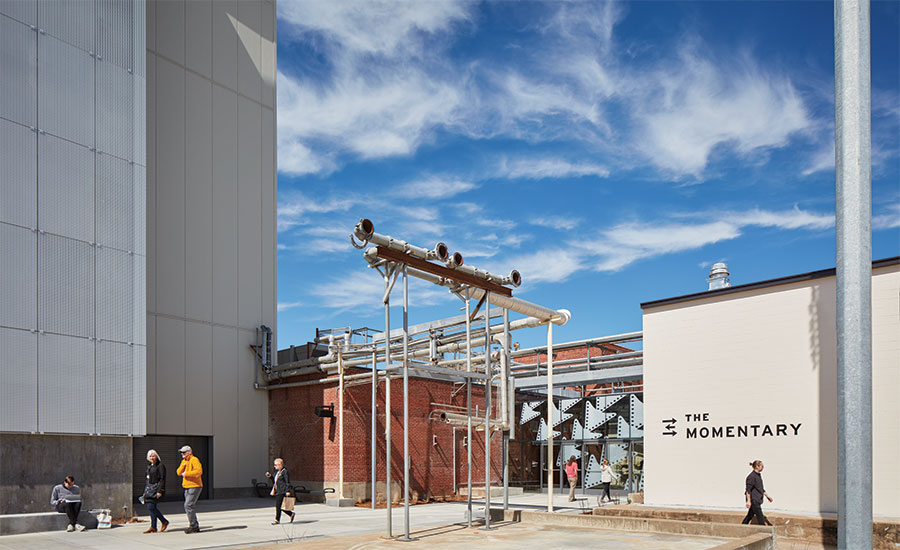 A greenhouse-like entry is in a central location. Photo © Tom Harris

Designed by the Chicago-based Wheeler Kearns Architects, the 61,000-square-foot project is the most recent development in a former industrial area being transformed into office space, shops, and food-focused businesses such as CO-OP by local architect Marlon Blackwell. The 10½-acre site, bordered by residential streets to the west and a creek and 36-mile bike path to the north, anchors these commercial developments, which edge its parklike grounds called the Momentary Green, landscaped by the Tulsa-based Howell & Vancuren. A weathering-steel bridge built over bioswale, introduced to manage stormwater, leads visitors toward the collection of connected structures dating from 1947 that make up the Momentary. 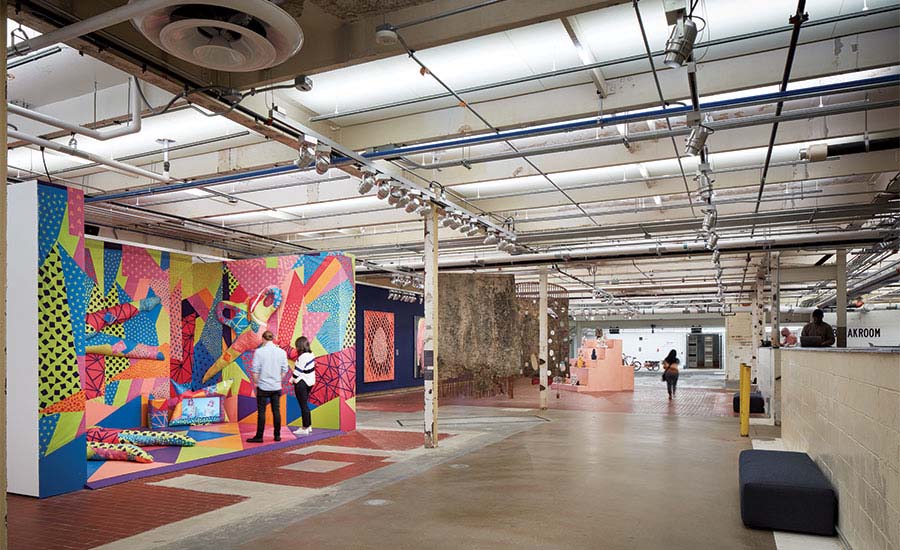 According to project architect Calli Verkamp, the clients wanted to preserve as much of the existing facility as possible. The challenge, she says, was figuring out how to incorporate the ambitious program into the patchwork of buildings: the original brick-masonry structure, along with steel and pre-cast concrete additions erected over the last four decades. The spaces had been cleared of large equipment and machinery, but infrastructure such as pipes, catwalks, and platforms remained. “We had to decide what to remove and what to keep as a relic,” she explains. With surgical precision, the team preserved an immense cylindrical boiler in one gallery and the skeletal remains of a stair in a 70-foot-high mixed-use space called the Tower, once employed for production. At the same time, they repaired damaged surfaces, replaced the roof, and installed advanced HVAC, lighting, and acoustical systems. 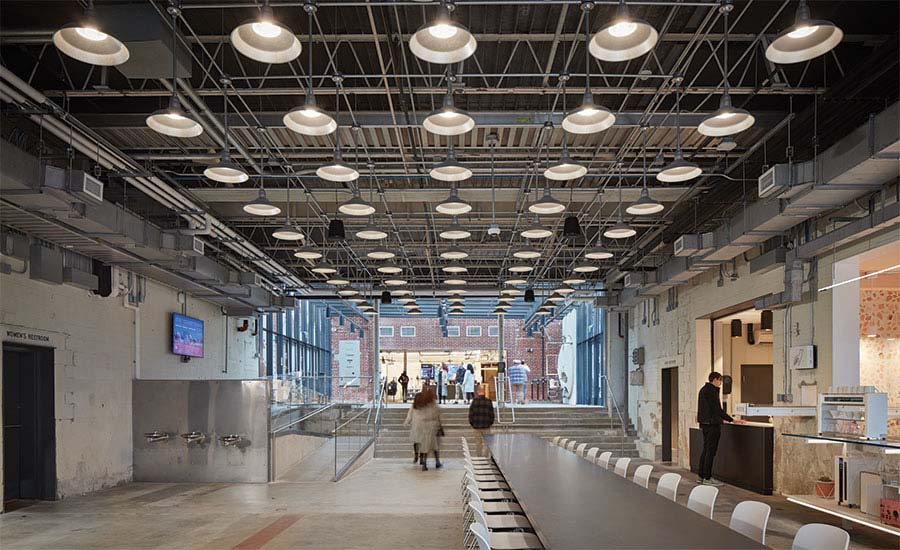 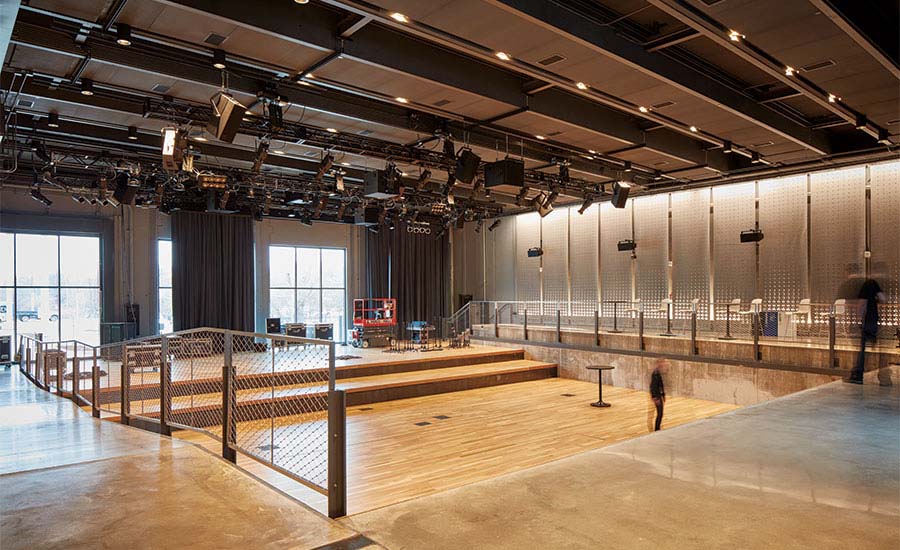 A former loading dock east of the lobby is now the Atrium (1), where visitors can grab a drink or coffee before entering the RØDE House (2), a performance hall with an adjustable platform floor that accommodates numerous stagings. Photos © Tom Harris

The architects aimed to touch the building lightly, Verkamp says, but several insertions were necessary for circulation and programmatic needs. The first was to reorient the entrance from the street to a more welcoming central location near the campus core and Momentary Green. To do this they replaced ancillary rooms added to the rear of the brick structure with a greenhouse-like lobby that opens to the north and south. One of four glass-and-steel interventions, the entrance also serves as a conduit between the building’s west wing—with mixed-media galleries, artist-in-residence studios, a black-box theater, a restaurant, and kitchens—and its east wing, where the design team converted a loading dock and garage into a casual bar/café and state-of-the-art performance venue. 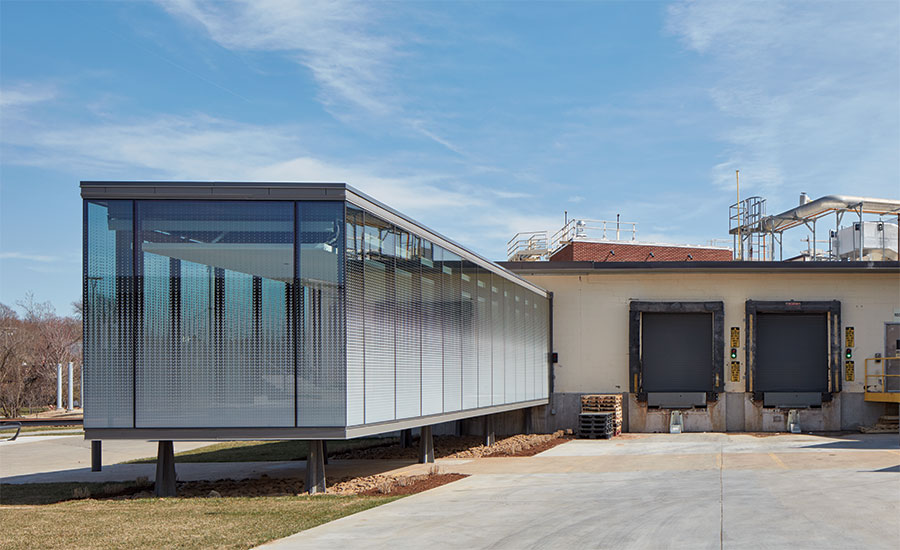 The Container evokes a docked truck and serves as a collaboration space for staff and artists-in-residence. Its glass shell is printed with a gradated Native American motif designed by Osage artist Addie Roanhorse. 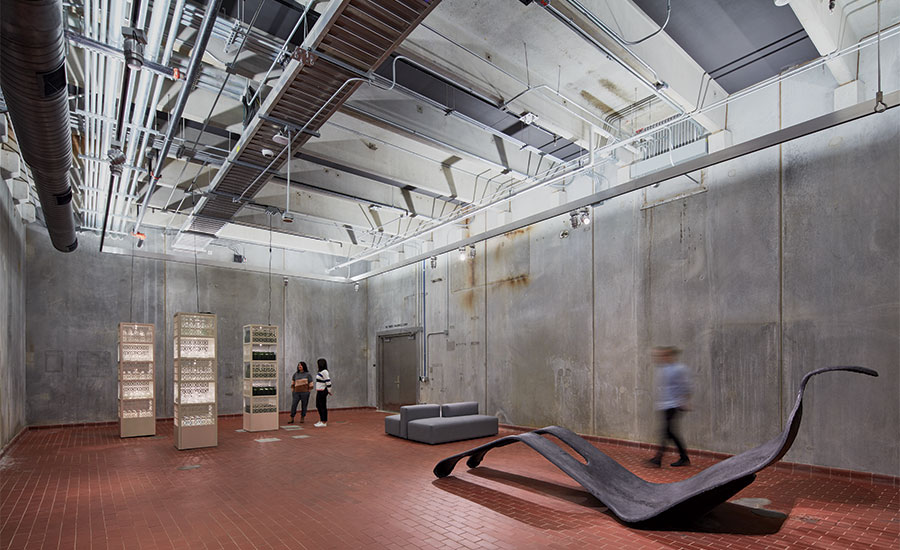 Each of the new structural elements is distinct from the Kraft factory. What looks like a glass trailer emerging from a loading dock is a collaboration space for visiting artists called the Container. A slender circulation hub, dubbed Glass Scrim, rising alongside the Tower supplants the old stairs and contains an elevator that carries guests up to a crystalline bar built above the Tower that offers 360-degree views of the city—as well as a peek into the volume beneath it through a circular glass insert in the terrazzo floor. 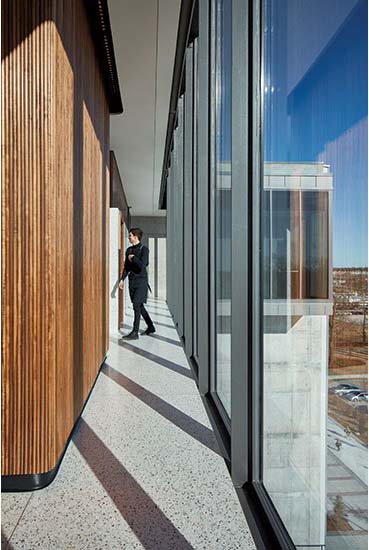 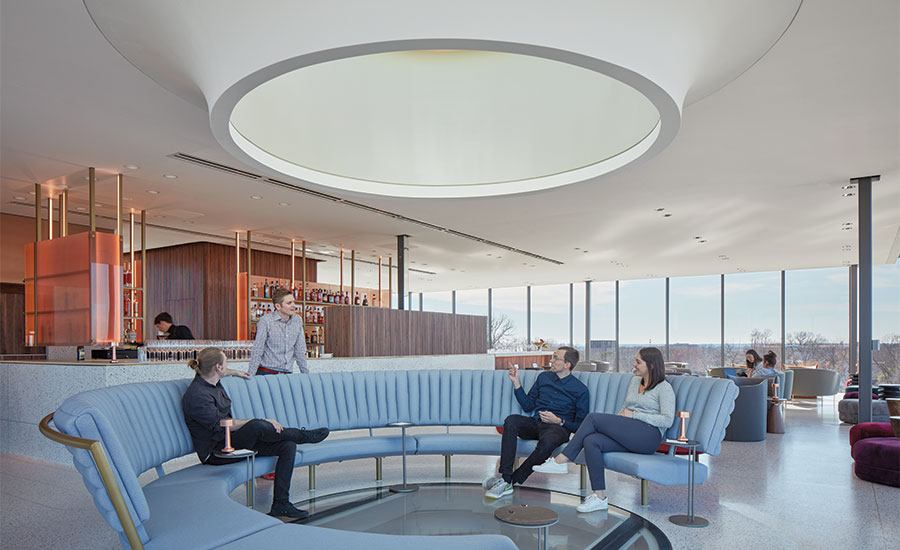 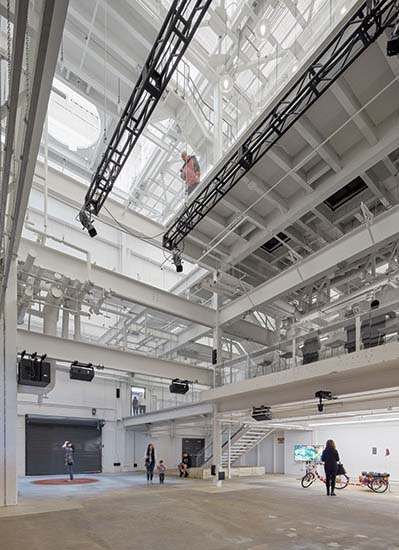 Clad in walnut and terrazzo, the Glass Scrim (3) provides access to the new Tower Bar (4), where a round skylight and glass floor enable views and daylight into the mixed-use Tower below (5). Photos © Tom Harris

Printed with gradations of a Native American motif, designed by Osage artist Addie Roanhorse, the glazed entrance, the Container, and Glass Scrim are part of a select group of highly visible and functional commissioned works that manifest the Momentary’s mission of “championing contemporary art’s role in everyday life,” according to director Lieven Bertels. Gently backlit in the evening, the tall circulation hub is a neighborhood beacon, as well as an appropriate backdrop for a bold neon installation by Nassau-born artist Tavares Strachan that announces, “You belong here.” 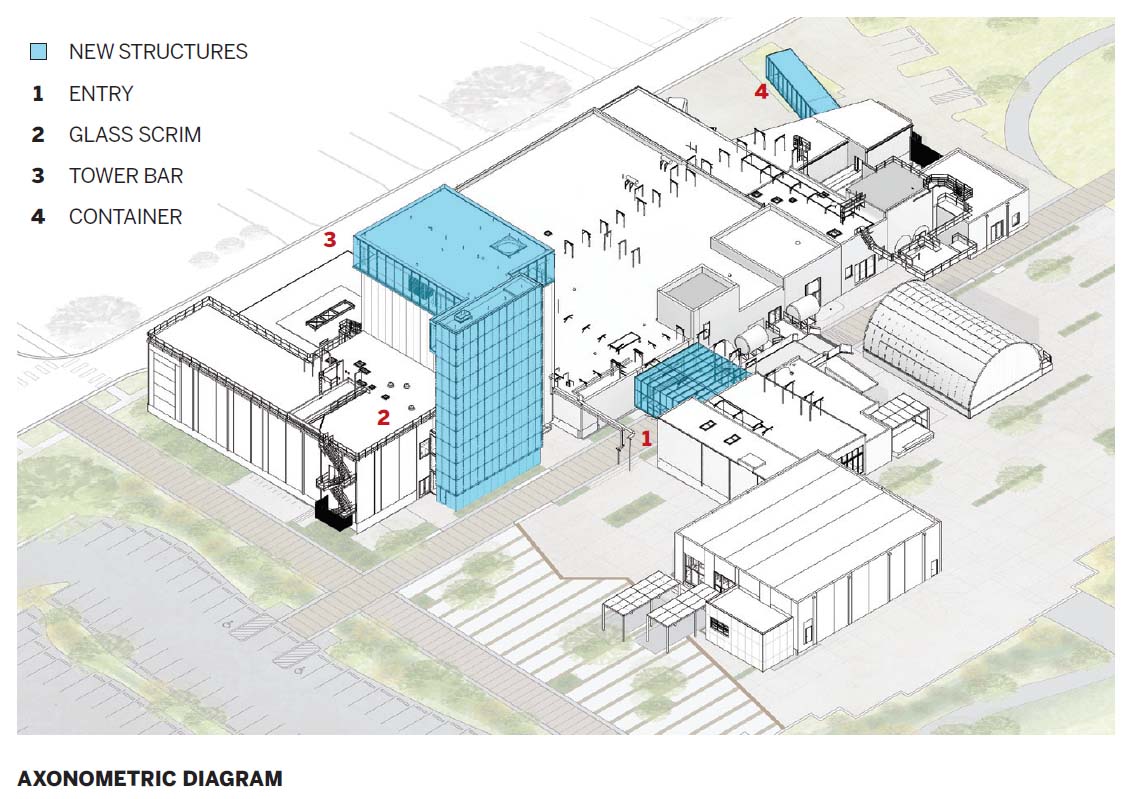 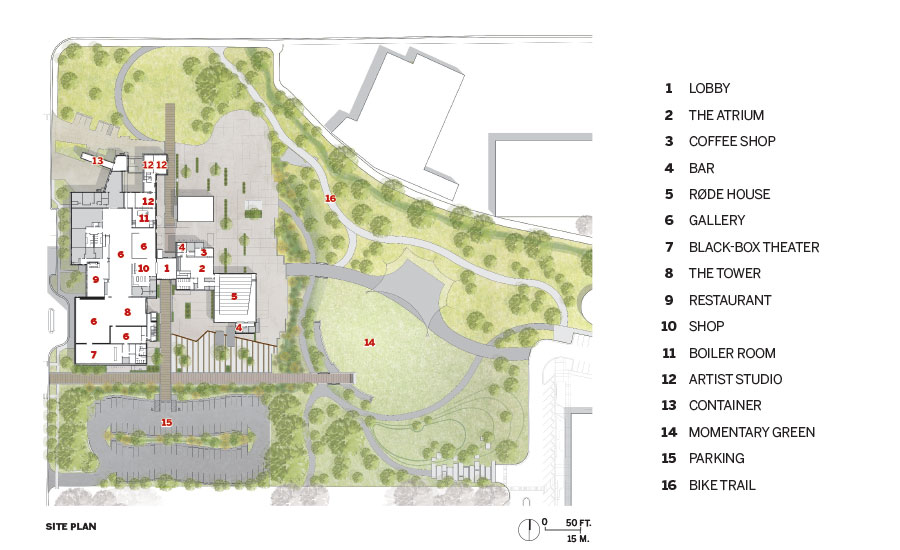