This website requires certain cookies to work and uses other cookies to help you have the best experience. By visiting this website, certain cookies have already been set, which you may delete and block. By closing this message or continuing to use our site, you agree to the use of cookies. Visit our updated privacy and cookie policy to learn more.
Home » CO-OP Ramen House by Marlon Blackwell Architects
ProjectsBuildings by TypeInterior DesignHospitality ProjectsRestaurant DesignRecord Interiors

There is a certain irony to the fact that a former meat processing plant in Bentonville, Arkansas, which for years churned out frozen chicken cordon bleu, is now home to the 8th Street Market, a food emporium selling such au courant offerings as fromage blanc and acai smoothies. It is also a sign of the times, since Bentonville’s most famous native—Walmart—has, over the years, caused the northwest-Arkansas enclave to balloon from small town to global business hub, bringing with it a wave of young professionals.

The 8th Street Market is part of downtown Bentonville’s Market District, a former industrial area that has as its focal point the brand-new Momentary contemporary arts center—a satellite of the Crystal Bridges Museum of American Art—which has made its home in a decommissioned Kraft-cheese factory. At the heart of the 75,000-square-foot Market building (whose core and shell were adapted by Hufft, out of Kansas City) is Brightwater—a food-study center affiliated with Northwest Arkansas Community College and backed by the Walton Family Foundation, the nonprofit led by the founders of the big-box retailer. The perimeter houses about a dozen rental spaces dedicated to local entrepreneurial ventures, from a brewery to a chocolatier, that highlight regional food systems. (At press time, 8th Street Market concerns were operating at a reduced capacity due to COVID-19.) 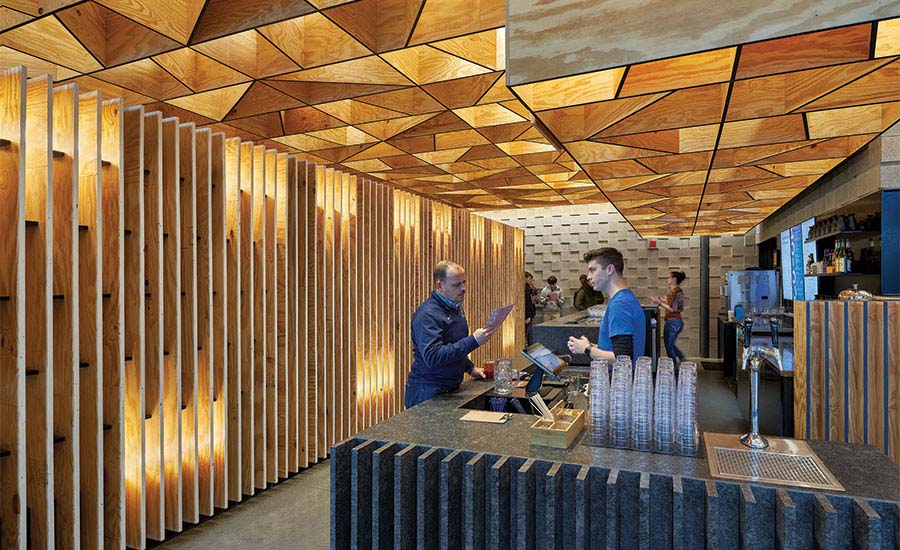 A plywood screen next to the granite front counter conceals a secondary dining area with booths. Photo © Timothy Hursley, click to enlarge.

The Market’s most recent addition, an “Ozark ramen house” called CO-OP, is a carefully crafted interior designed by Marlon Blackwell Architects (MBA) that aims to cater to Bentonville’s recently transplanted millennials, as well as locals, without straying too far from the area’s roots. “We wanted this project to feel it was of the region, the neighborhood, the building,” says Rob Apple, former CEO of Ropeswing Hospitality Group, which he founded with Tom Walton. CO-OP’s localized strategy is reflected in the plain-spoken menu, which offers an Arkansas take on ramen, riffing on the traditional Asian comfort food by incorporating such Southern fare as fried chicken. MBA’s design approach for the 1,700-square-foot interior takes a similar tack. Referring to the Japanese principle of wabi-sabi, which is based on the acceptance of imperfection, the architects drew on a limited list of basic ingredients—plywood and concrete masonry units—to build a refined interior that still reflects the rough-and-ready spirit of place. “We wanted high design with a low finish,” says Apple. 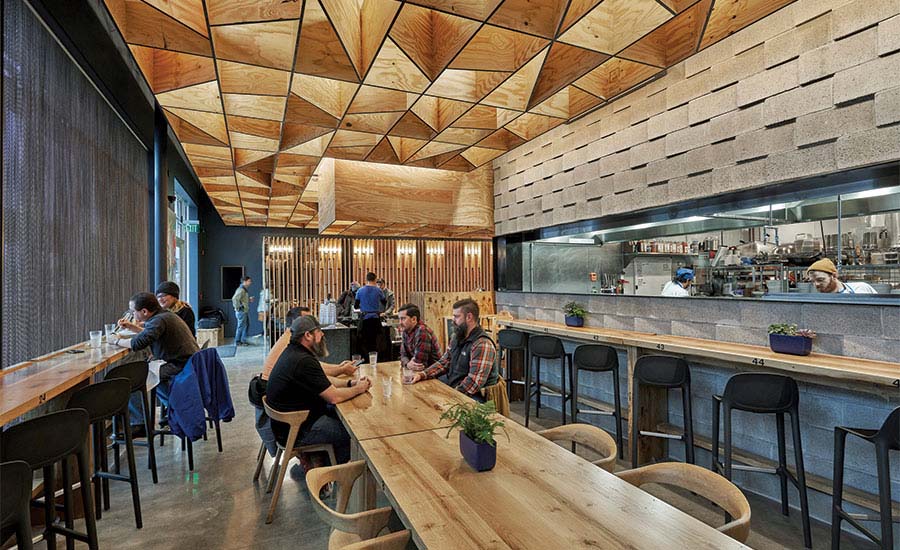 Approaching the raw interior, the design team, led by Meryati Blackwell (a principal at MBA, and Marlon’s wife), divided the space into two main zones. Building on the idea of a “dining cave,” the architects created, directly off the entry, a compressed space, double-loaded with two rows of four booths each. “I wanted it to be comfortable, but also tight,” says Meryati, pointing to an intimacy through proximity in contrast to the suburban preference for grossly scaled, empty-feeling restaurants. Diners can peer through a plywood screen into the expansion of the main dining area, with its high ceiling, big community table, and green wall. Bar seating lines the 12-foot-high storefront windows along the area’s perimeter wall; it also runs alongside the kitchen, visible through a long aperture and separated from the dining area by an expanse of unfinished CMUs installed in a sawtooth pattern. 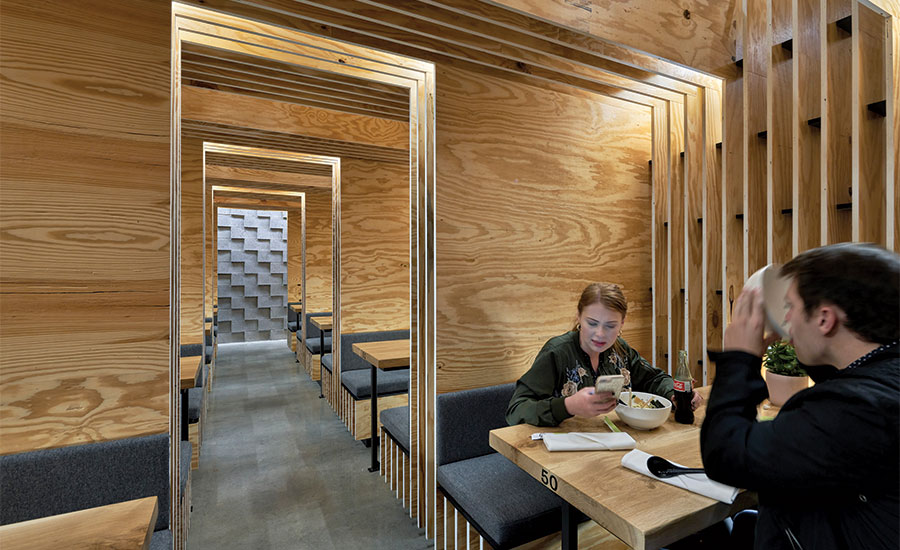 Meryati had the initial impulse to do something special with the ceiling, as a continuous element that visually connects the restaurant’s distinct spaces. “I said, ‘Let’s start with a grid of boxes,’ ” explains the architect. Marlon likens the move to the Moore Honeyhouse, one of his early projects incorporating a structural-steel-plate-gridded facade that is used to store jars of honey, extracted from the adjacent hives. “We took the honey out, turned the grid upside down, and said, ‘This is the ceiling.’ ” The pair then asked, “What kind of material do these boxes want to be made of? What will create a big impact in this small space? And what can we buy at Lowe’s?” Brainstorming together, the architects found the answer to their questions in plywood. Wood is something Arkansas is known for, and it would be “precise but warm,” says Meryati. The team showcased plywood’s three-dimensional capabilities by connecting planes of the material to fashion origami-like ceiling coffers (with black-painted edges), which have the added benefit of providing sound absorption, as well as forming baffles for the lighting—basic low-Kelvin dimmable LED bulbs tucked between the fins. Further extending the conceit, the team put the plywood to work elsewhere. The Cave is a clever composition made almost entirely of the material: imagine a volume composed of an array of flat planes the thickness of a single sheet of plywood laid parallel to one another, separated by 3-inch gaps. The architects then “carved” into this composition to create the voids of the booths and the passage between them. The overall effect of the material use is a cohesion within the restaurant that achieves the desired tailored but down-home informality.

As the Fayetteville-based MBA takes on bigger commissions of greater prominence, the firm sees diminutive, scrappy projects like CO-OP as an opportunity to reconnect with their own roots designing small-scale work. “And,” the pair says, “projects like this reaffirm the ethos that everything deserves architecture.” 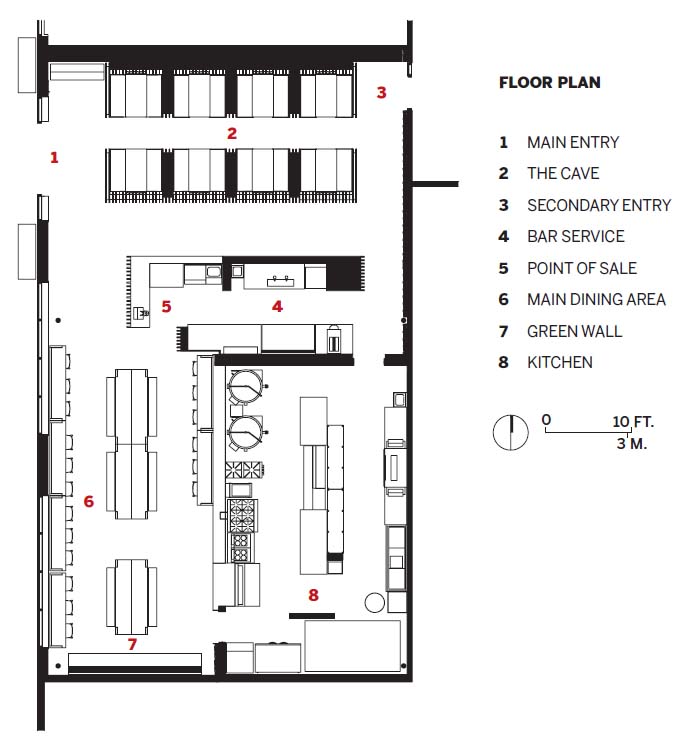 Custom coffers & Booths:
Up & Down Industries