Visitors to Gustaf-Gründgens-Platz in the center of Düsseldorf, Germany, might initially think that the 90-foot-tall off-kilter box shrouded in precisely clipped shrubs is a living sculpture or some sort of oversized topiary. The mysterious volume at the plaza’s southern edge is, in fact, enveloped in nearly 30,000 hornbeam hedges. And, if laid end to end, they would stretch nearly five miles, making the installation Europe’s largest green facade, according to Ingenhoven Architects, the project’s designer. But underneath this leafy layer, and within a smaller adjacent triangular structure topped with a sloping lawn, are 450,000 square feet of retail and office space. The only hint of human occupancy, at least from the vantage point of the plaza, are a set of glazed portals inserted within the hedges that lead to the office tenants’ elevator lobbies. 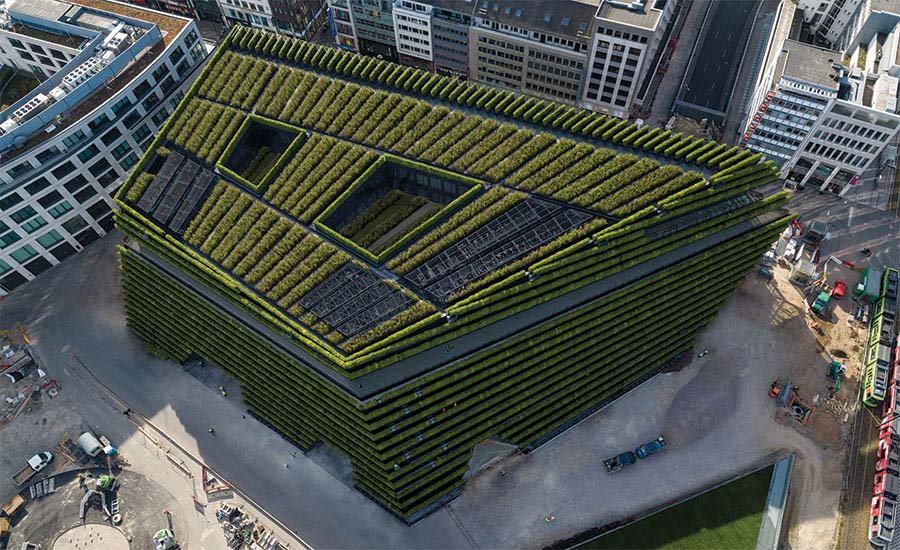 The only indications of human habitation from the plaza are ground-level portals set within the shrubs. Photo © Hans-Georg Esch, click to enlarge.

Kö-Bogen II, as the project is known, is not the first in which the firm has linked landscape and architecture so thoroughly that it is difficult to determine where one ends and the other begins. In 2017, the architects completed Marina One in Singapore in collaboration with the landscape firm Gustafson Porter + Bowman. The residential and commercial development has a junglelike profusion of tropical vegetation that grows within a central court and from terraces and rooftops. In Düsseldorf, Ingenhoven Architects has taken a more controlled approach, selecting the hornbeam, a native coniferous tree whose leaves turn brown in the fall but stay on the branches all year round. These shrubs have been groomed to maintain a rectilinear profile and create a manicured—or what firm founder Christoph Ingenhoven calls a “dominated”—version of nature. 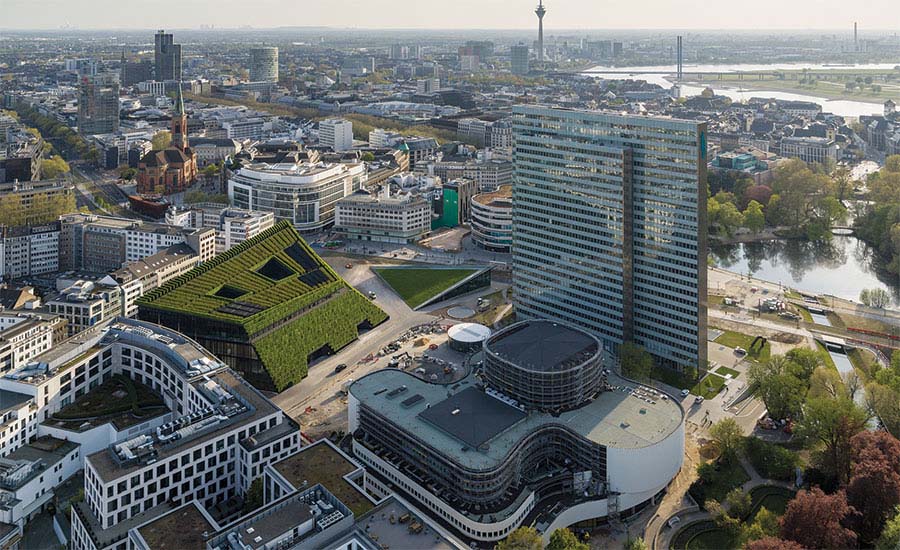 The volume enveloped in hornbeams, along with a smaller sloping lawn-topped structure, defines a new entry for a plaza that is also home to the state theater and an office tower. Photo © Hans-Georg Esch

One motivation for all the greenery was to refer to a beloved nearby park, the Hofgarten, while lending the mixed-use complex an expression distinct from two landmarks that also border Gustaf-Gründgens-Platz—the Dreischeibenhaus (1960), a 25-story Miesian office tower, and the Schauspielhaus (1970), an organically curved state theater that Ingenhoven Architects is currently renovating. “We didn’t want to compete with the two icons,” says Ingenhoven. “The third building on the plaza had to be completely different.”

The project is the culmination of Ingen­hoven’s decades-long preoccupation with the center of Düsseldorf—the city where his inter­national practice is based. Since the early 1990s, he had been advocating for removal of a postwar-era multilane roadway elevated on piloti. It sliced through the urban fabric, divid­ing the Hofgarten in two and isolating the Dreischeibenhaus and the Schauspielhaus from much of the city. In large part due to Ingen­hov­en’s efforts, the thoroughfare was finally torn down in 2013 and replaced with a tunnel system. Meanwhile, Kö-Bogen I, designed by Daniel Libeskind, was built on the opposite side of the elevated highway. That mixed-used complex, comprising a pair of sinuous struc­tures connected by a pedestrian bridge, antici­pated the roadway’s removal, opening soon after demolition was complete. Ingenhoven’s firm subsequently won an invited competition for Kö-Bogen II, which he saw as an opportu­nity to reimagine the Gustaf-Gründgens-Platz and highlight the relationship between the theater and the office tower. The scheme not only provides a sharp contrast to the two exist­ing buildings, but the combination of the slop­­ing lawn and the shrub-covered facade form a void or a “valley” that frames these older struc­tures and also defines a new entry to the plaza.

Above five levels of underground parking, Ingenhoven’s reinforced-concrete structures are organized so that the smaller, triangular one and the basement and first three floors of the trapezoidal one are devoted to retail (its top two levels house offices). And although, from Gustaf-Gründgens-Platz, the larger volume appears almost entirely wrapped in shrubs, its south facade, which faces a major shopping street, is glazed, as is the east facade. The other two elevations are clad in metal panels, with the hornbeam planting beds, each 18 by 40 inches, supported on their own armature, which includes a system of cages that travel on rails, allowing horticulturists to access the shrubs. (The roof is also covered in hornbeams, but these are more conventionally supported). The arrangement provides one facade for the retailers, who generally prefer mostly black-box store environments, to place signage and showcase their wares, while allowing some connection to the city. A terrace wrapping the building’s fourth floor and tucked between the rows of hornbeams on the north and west faces gives office workers access to daylight, views, and fresh air. 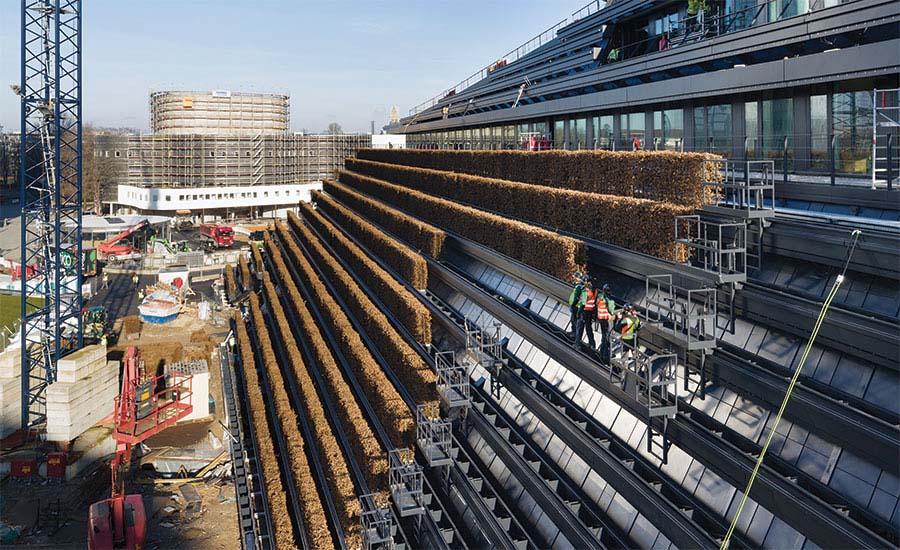 The hornbeams were installed during the winter, when their leaves are brown. Photo © Hans-Georg Esch

Despite some delays due to COVID-19, the shops are slated to open this fall, with the first office tenants moving in at the end of the year. But Kö-Bogen II should provide advantages for city residents—even before anyone steps inside. The sloping lawn, for instance, is accessible for people to lounge and enjoy the sun. The hornbeams create ecological benefits, including storing as much carbon as 80 fully grown trees, says the project team. Karl-Heinz Strauch, a specialist in phytotechnology, helped develop the plan for the hornbeams’ irrigation, nutrients, and pruning. He has thoroughly investigated the bushes, in addition to monitoring the individual selected shrubs at the nursery in northern Germany, where they had been growing in their planters since 2016 before being installed on the building early this year; he studied a full-scale mock-up of one corner erected near the site and worked with specimens at his lab at Beuth University of Applied Sciences in Berlin. Strauch knows how much water the engineered soil mix can hold, how long it takes for each hedge’s root system to fully form, and the plants’ rate of transpiration (the process through which they give off water vapor through their leaves). He points specifically to urban heat-island mitigation, explaining that the plants will prevent the building envelope from absorbing solar radiation and then warming the adjacent air.

Should any plants fail, they could be swapped out by crane. But Strauch sees this as unlikely, assuming that the maintenance regimen—including clipping the shrubs back about three times a year and periodic fertilization—is adhered to. The living facade comes with a 99-year warranty. “If replacement is necessary, it will be far into the future.”

For Ingenhoven, this aspect of the project’s performance is part and parcel of his larger sustainability and urban place-making goals. As architects, “we have to ask what our buildings do for the city,” he says. “We can’t do things merely because they are beautiful.” 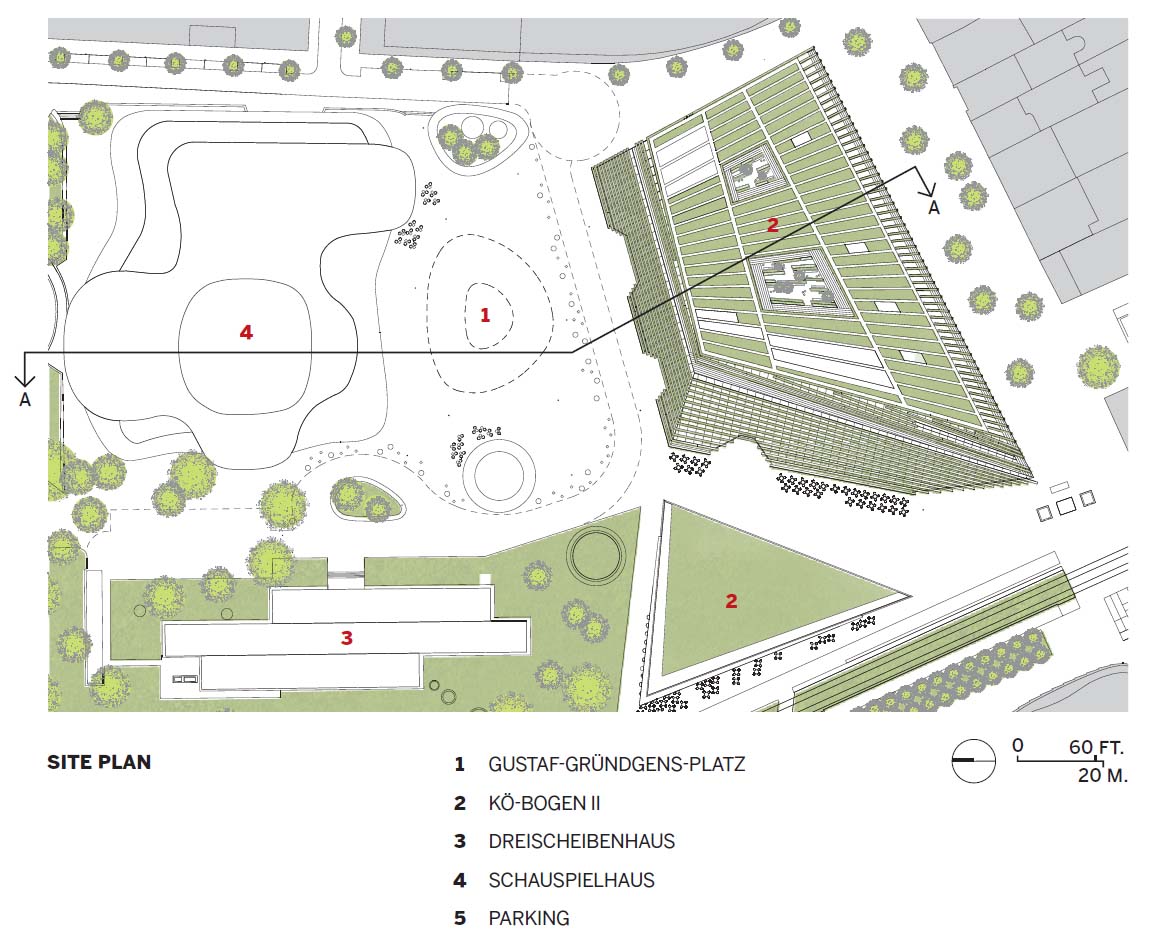 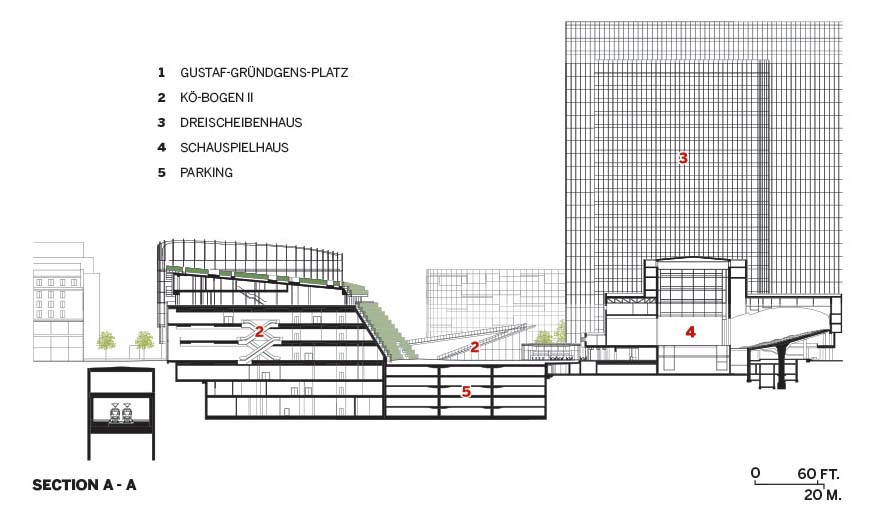 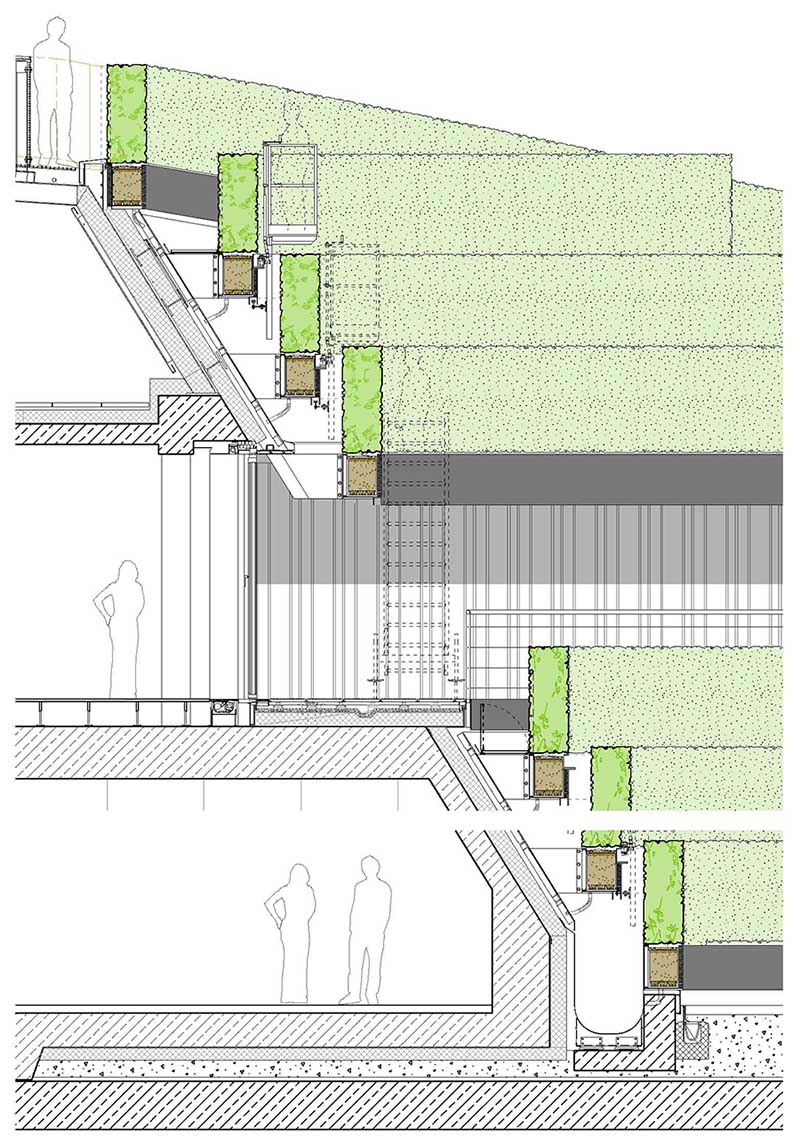