This website requires certain cookies to work and uses other cookies to help you have the best experience. By visiting this website, certain cookies have already been set, which you may delete and block. By closing this message or continuing to use our site, you agree to the use of cookies. Visit our updated privacy and cookie policy to learn more.
Home » Louisiana Children’s Museum by Mithun
ProjectsBuildings by TypeLandscape ArchitectureMuseums & Arts Center ProjectsPark & Public Space Design

When hurricane Katrina devastated New Orleans 15 years ago this month, the site where the Louisiana Children’s Museum (LCM) now sits was under several feet of water. Back then, the museum was housed in a brick building in the Warehouse District. “The idea to move was not because of a plan to expand. It was motivated by a need for the city and state to invest in children differently,” says LCM CEO Julia Bland, whose mission for the museum went beyond entertaining children for a few hours. Louisiana has consistently ranked among the worst states for children’s education and health. “We needed to create a space to bring many different resources together. We were on the bottom of all the good lists and the top of all the bad lists.” 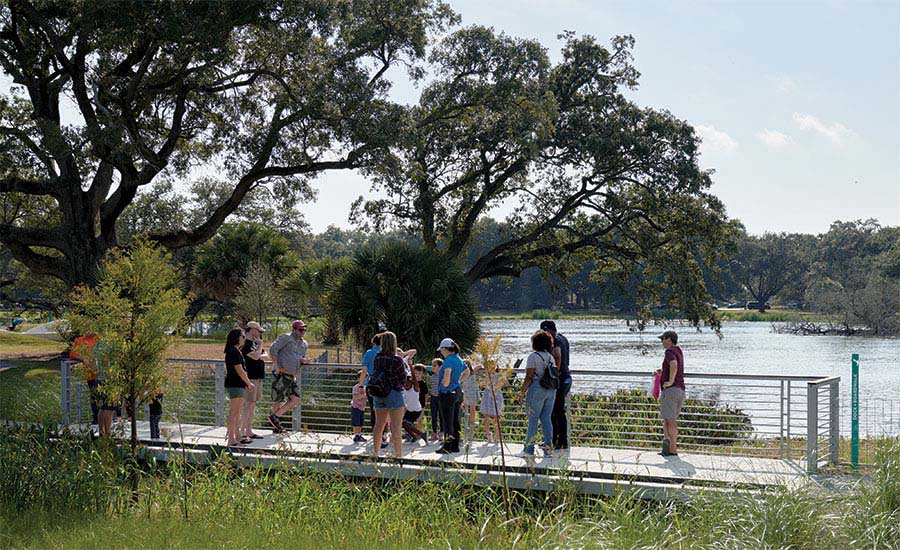 LCM engaged Seattle-based architecture firm Mithun, which includes a landscape architecture practice, to negotiate the 8.4-acre site, located within the world’s largest grove of live oaks, in City Park. One of the country’s oldest urban parks, it was built on swampland and incorporates 137 acres of water bodies within a man-made lagoon system that circulates between Lake Pontchartrain and Bayou St. John. The museum’s new 54,600-square-foot home is spread out between two linked two-story structures that were carefully sited to protect the oaks while enhancing the nearby lagoon. “Because we took an integrated approach to the design, we did not put the front door at the drop-off,” says Mithun landscape architect Christian Runge. 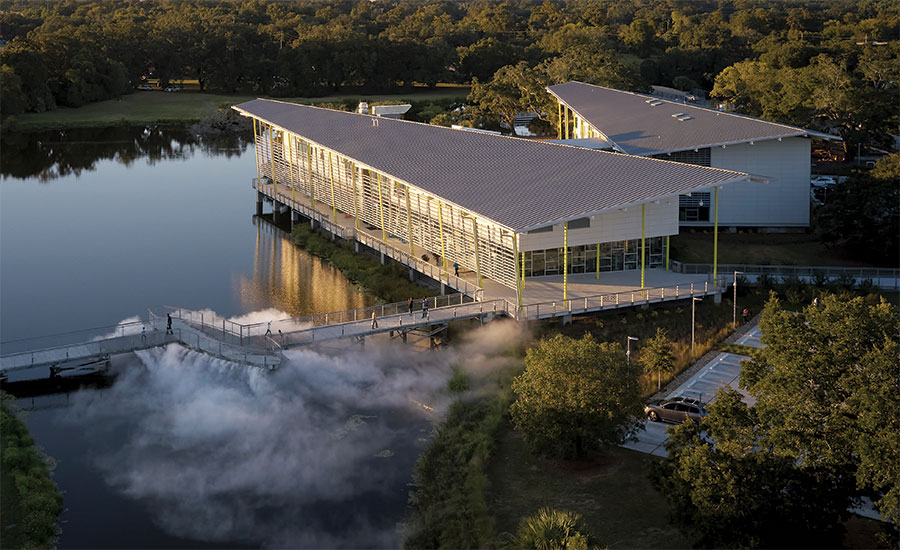 A diatom-shaped platform includes a fog sculpture that erupts into a mist over the lagoon every 20 minutes. Photo © Kevin Scott

Indeed, the overall design encourages meandering. Mithun transformed the previously flat site, once part of a golf course, to create a rolling topography that mimics the hummocks and hollows—shallow rises and depressions—characteristic of Southern Louisiana landscapes, and regraded the lagoon, softening it to establish a living shoreline and carving out areas for wetlands. A diatom-shaped platform at the center of a bridge over the lagoon includes a fog sculpture—by artist Fujiko Nakaya, who consulted on Diller + Scofidio’s 2002 Blur Building—that softly erupts into a dense mist every 20 minutes. “There’s still trauma associated with water in New Orleans,” says Mithun design partner Richard Franko. “We want to connect with water in a positive way.” 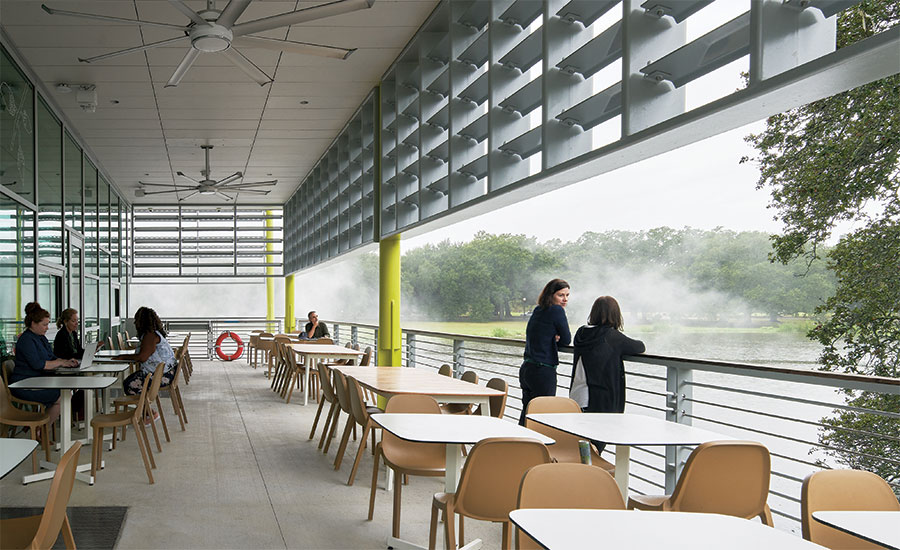 An outdoor seating area of the café overlooks the water. Photo © Kevin Scott, click to enlarge.

The building sits on 60-foot-deep piles and is set 5 feet above existing grade for flood mitigation. The steel structure is painted a yellow green to evoke new botanical shoots, another important aspect of the design. Leafy plants inhabit the wetland areas, while grassy species are planted upland. The entire landscape is conceived as a sensory garden, with edible plantings, but also highly aromatic and colorful ones such as anise plants and pink muhly grass. The oaks provide a high canopy year-round.

The choreography of the visitor experience of the landscape and the architecture connects children (and adults) from across the city and region to nature, increasing the museum’s focus on environmental education. Part of a parkwide plan to include more institutions—City Park is home to several, including an art museum and botanical garden—LCM’s extensive landscape and outdoor programming allowed it to reopen earlier than others during the coronavirus shutdown. 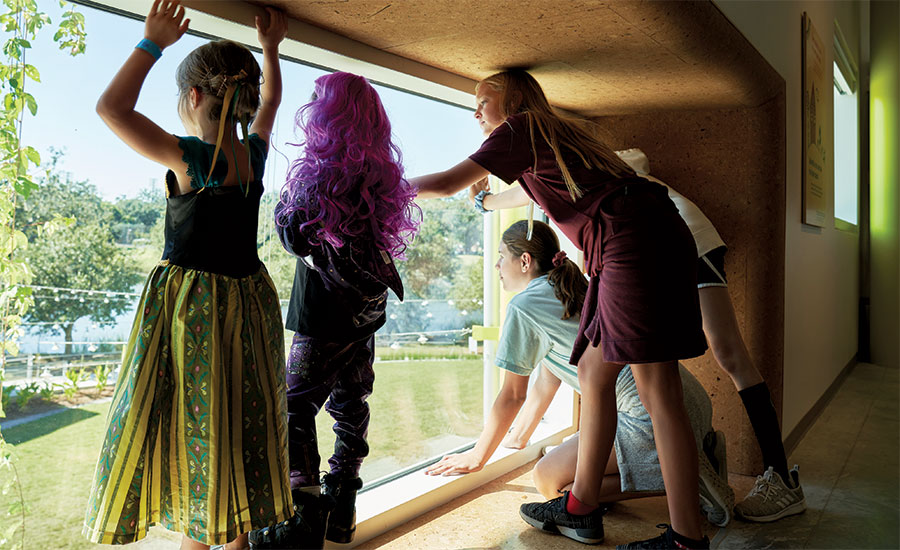 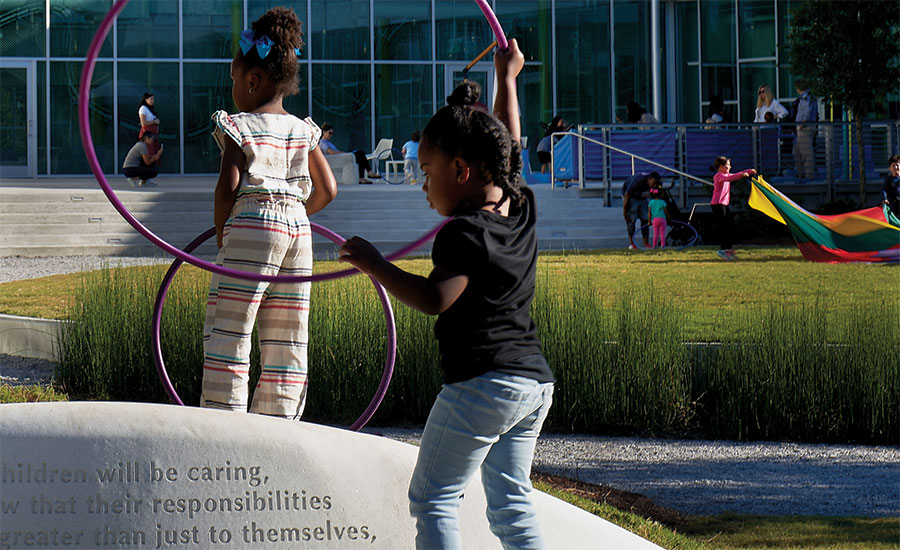 Design elements including 12 “kindows” (1) and benches (2) were scaled to children. Photos © Kevin Scott

The landscape design adheres to the guidelines of the New Orleans Water Plan pilot project, which aims to address increasingly frequent high-water levels. The lagoon could function as a stormwater basin to relieve pressure on the canal systems. A second water system captures rainwater from the building roofs and parking areas and feeds it to bioretention swales, while a portion of it is diverted to a 9,000-gallon cistern that feeds irrigation. Existing live oaks and related drainage patterns were integrated into the site grading and carefully protected during construction. “We layered a new, more resilient system on top of what’s already a fairly artificial one,” Runge points out. 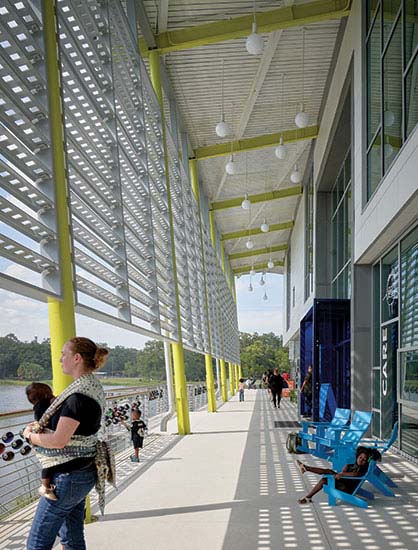 A contemporary version of a New Orleans-style porch includes glass beads along the railing that were inspired by Mardi Gras beads. Photo © Kevin Scott

The building, too, features sustainable strategies, and is currently tracking for LEED Gold certification. To deal with the city’s subtropical climate, the structure features radiant cooling in the concrete slabs, with a dessicant wheel in the intake airstream to dry the humid outdoor air. There are also large overhangs and a generous porch, the kind for which New Orleans is famous. The project exceeds energy code through a high-performance envelope—over 4,000 linear feet of perforated louvers provide solar control at the porch—and a high-efficiency mechanical system. (The roof is set up for a PV array, with conduit infrastructure, though one is not yet installed.)

About a third of the new building—18,000 square feet—is dedicated to exhibitions, which include a life-size interactive chessboard sharing New Orleans history, and a display about the “Mighty Mississippi.” (A floating classroom takes groups out on the lagoon and provides a different perspective on the land from the water.) The museum’s south wing features a literacy center and parent-resource center providing families with free information and educational events.

Opened last August, the new museum is located near public transportation, and is meant to be accessible to all school groups and families. “We wanted it to be more welcoming, more beautiful, more inclusive,” says Bland. “The play factor here is dramatic, along with the way parents are engaging with their children. The community has really embraced this place.” 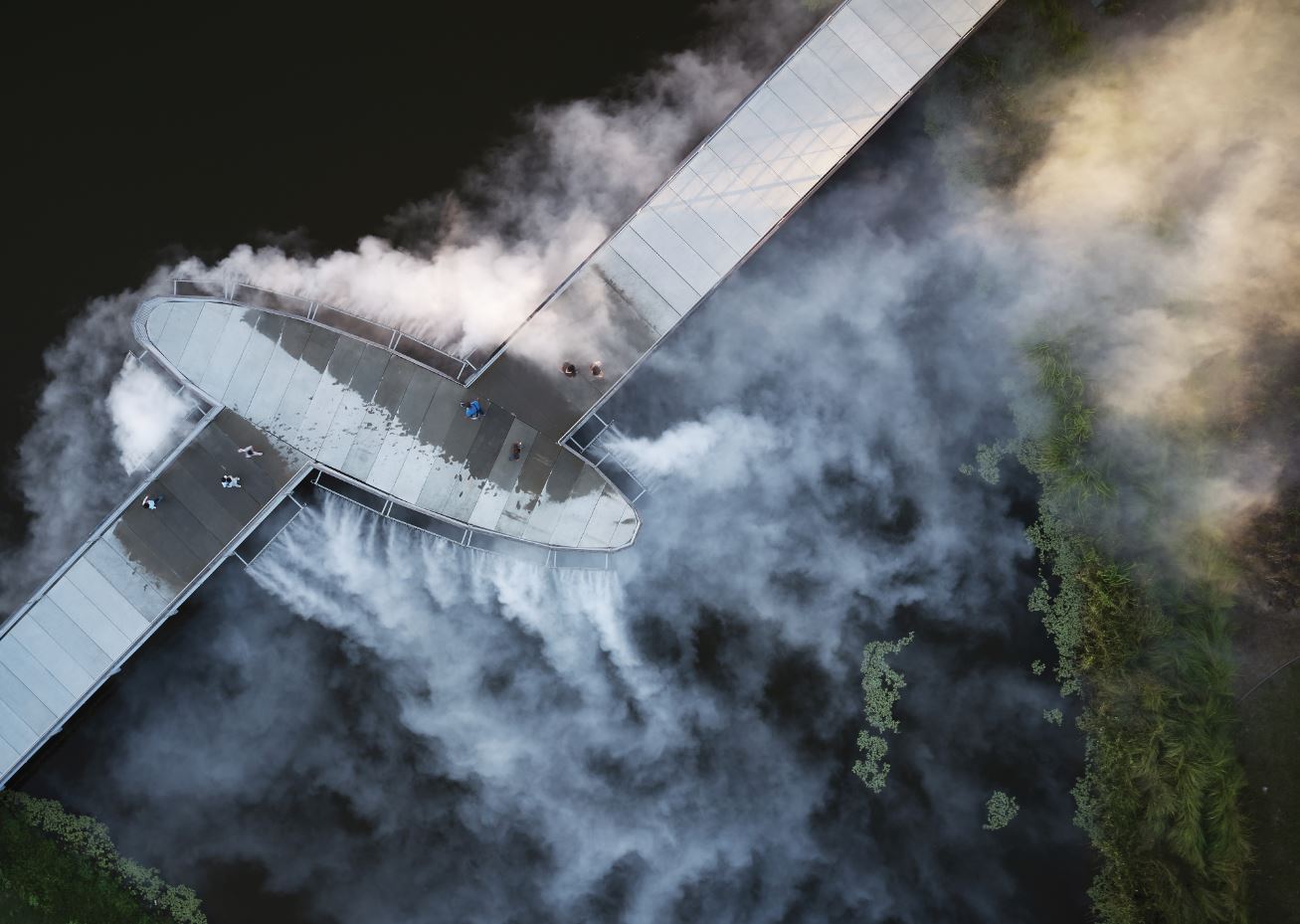 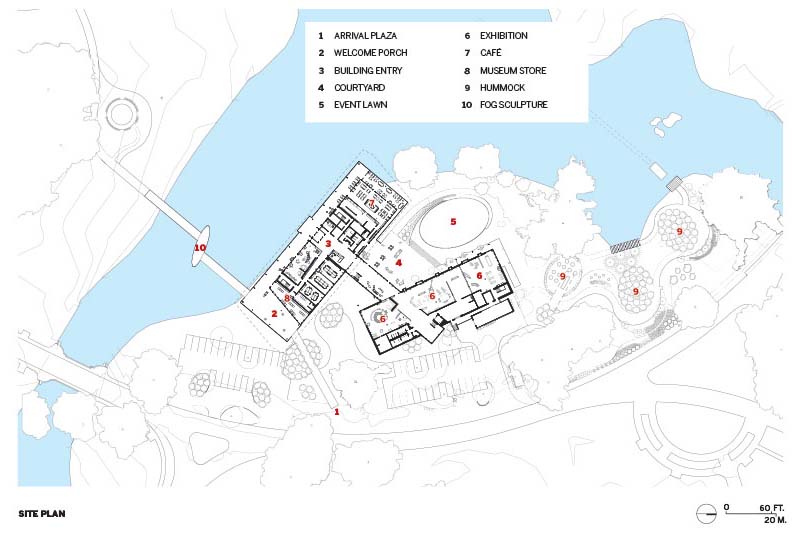 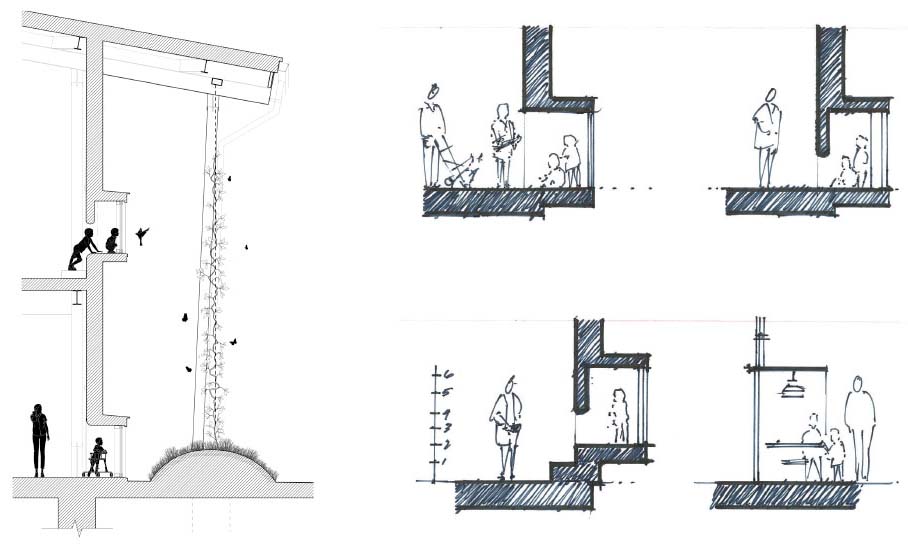 The Rubell Museum by Selldorf Architects