This website requires certain cookies to work and uses other cookies to help you have the best experience. By visiting this website, certain cookies have already been set, which you may delete and block. By closing this message or continuing to use our site, you agree to the use of cookies. Visit our updated privacy and cookie policy to learn more.
Home » Tea House at Linyin Buddhist Temple by Amateur Architecture Studio
ProjectsBuildings by TypeSpiritual Projects

As of this summer, the teahouse that Wang Shu and his wife and Amateur Architecture Studio partner, Lu Wenyu, began designing 10 years ago for a Buddhist temple in their home city of Hangzhou, China, was just about finished. In fact, Wang reckons, it’s been “almost finished” for the past three years—the main issue being that “the monks are in no hurry.”

Buddhism may teach that the universe exists in a state of perpetual incompletion. But architecturally speaking, save for a few outstanding adjustments, the teahouse has reached a compellingly final form. Tucked away from the tourists and worshippers who throng the sprawling Lingyin temple and monastery—one of China’s best-known religious sites, off the mountainous western shore of Hangzhou’s West Lake—the project occupies about 15,000 square feet in a part of the temple grounds that’s closed to the general public. 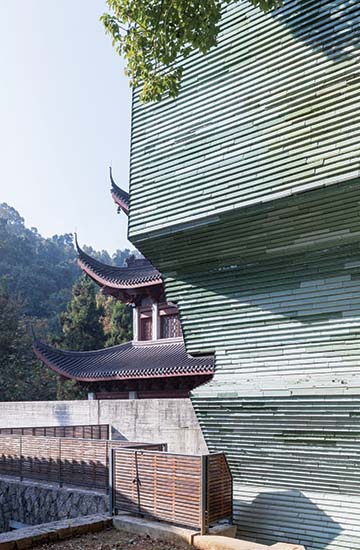 With a tea hall, “tea tower,” and guest rooms for meditation organized among terraces, pools of water, and winding stairs and walkways, the complex is meant as a retreat for the temple’s 200 resident monks and their guests—an inner sanctum within the inner sanctum. “From the outside, it almost disappears,” says Lu, referring to its low-key exterior of white and stone walls obscured by camphor trees. “It’s like a secret place.”

Begun soon after the Pritzker-winning Wang completed his now-landmark Xiangshan campus of the nearby China Academy of Art, the walled teahouse, with its rectangular courtyard plan, combines many of the architectural moves for which Wang is known: an inventive use of craft and materials including ceramics, bamboo, irregular dressed stones, and bamboo-formed concrete; sculptural voids and volumes; and a spatial strategy of carefully constructed pathways, sight lines, and other perspectival devices derived from the worldview-defining typologies of traditional Chinese gardens and landscape paintings. 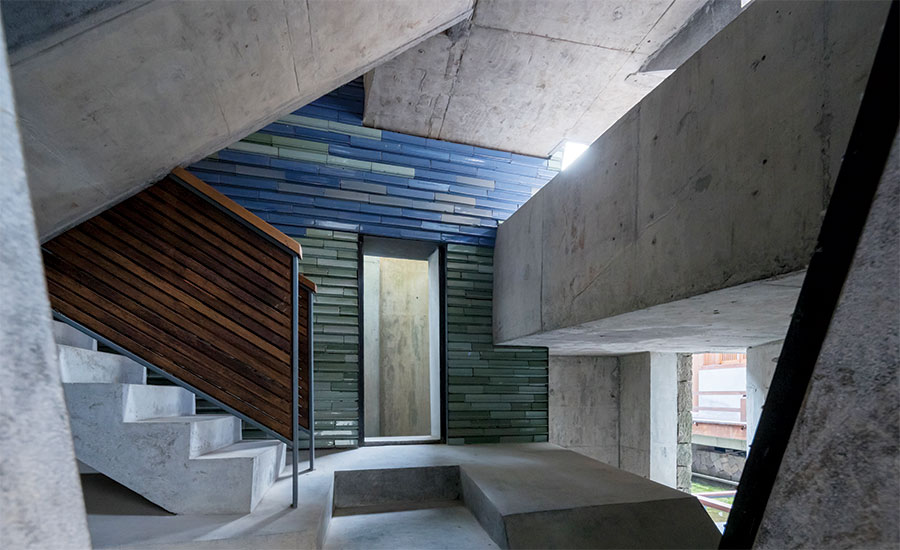 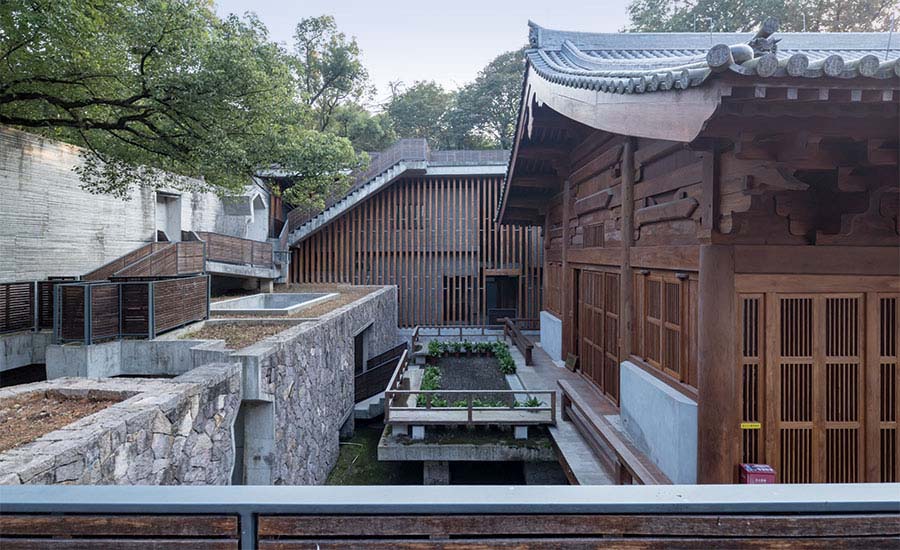 A teak pavilion was newly constructed in a traditional Song-dynasty style.

Crossing a sloped granite bridge, through an opening in the northern wall, one arrives in a small forecourt with exposed concrete walls, and overhangs framing both a pool and the sky. The space acts as a kind of threshold to an interior world: ahead, across more water, lies the main tea hall, a teak pavilion newly constructed in a traditional Song-dynasty style. To the left and right, however, is something altogether different: a sequence of cavernous, winding passageways, punctuated by openings, that connect the guest rooms, tea tower and other facilities.

The cavelike quality evokes a longstanding Buddhist tradition that includes the 10th- to 14th-century grottoes and rock carvings of the Feilai Feng limestone peak, which faces the teahouse from the other side of a stream. Emerging from this quasi-subterranean space, the craggy profile of the precast-concrete tea tower erupts from the complex’s northwest corner, its jagged silhouette clad in ceramic tiles glazed in celadon greens and blues and hung loosely on concealed metal rods. 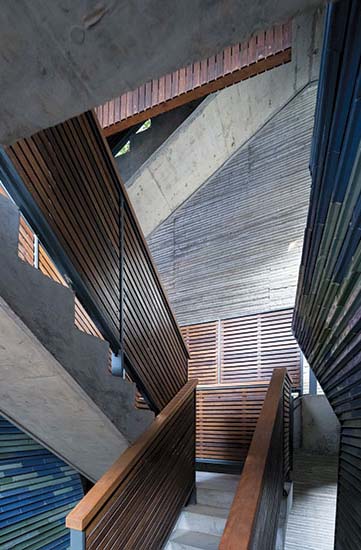 Escheresque stairs lead up and down the tower, connecting to a series of winding and crooked pathways and stairs that traverse their way toward the guest rooms. Photo © Iwan Baan

Escheresque stairs lead up and down the tower, connecting to a series of winding and crooked pathways and stairs that traverse their way towards the six guest rooms. Stacked in pairs, the latter’s concrete walls and bed platforms lend a, well, monastic feel. As in other projects by Wang, the walkways meander up onto the roof, “as if you’re climbing a mountain,” he says.

A teahouse in a Buddhist monastery makes an especially convincing setting for Wang and Lu’s innovative architectural language, which extracts from tradition without copying it. But this makes the main tea hall—essentially, a Song dynasty re-creation—all the more puzzling.

“I wouldn’t be allowed to design something totally new here,” Wang explains, referring to the site’s historic sensitivity. (Though dating to the 4th century, the temple mostly comprises modern constructions designed in a traditional style.) “But if I give you an ancient-style structure, it’s OK,” he continues, before adding with a wink: “The rest is just adding on a ‘landscape.’ ” 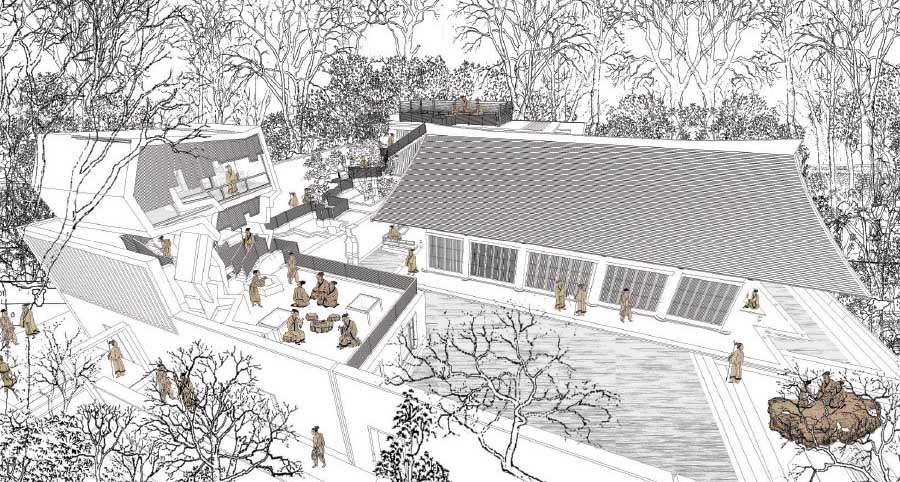 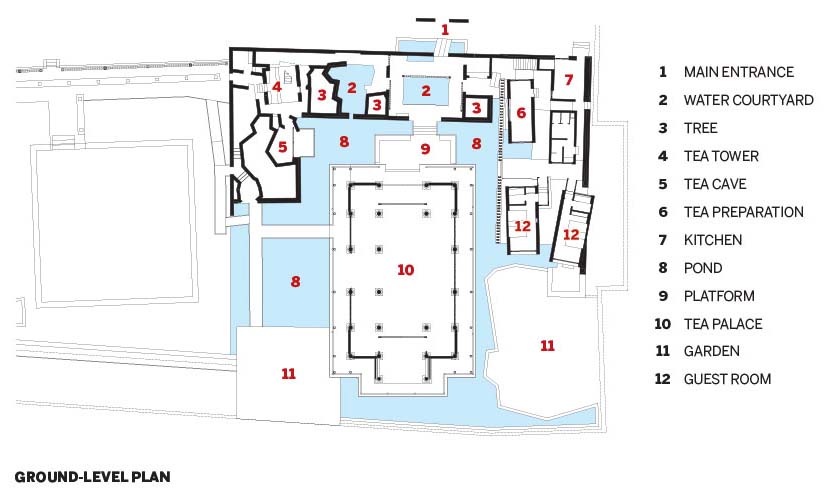 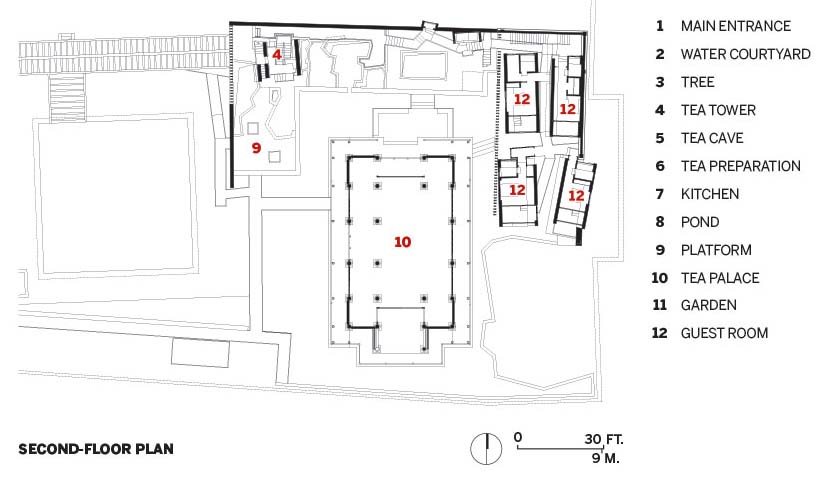 The Tea House by Kengo Kuma