Gensler with Office for Visual Interaction

Home to the Cleveland Cavaliers basketball team, the former Quicken Loans Arena opened its 2019–20 season last autumn with a name change and new front door. After an extensive renovation by Gensler—which included bringing the 26-year-old venue to state-of-the-art standards as well as adding a glazed lobby—the Rocket Mortgage FieldHouse today welcomes guests and passersby with a fresh take on the fan experience. Rather than assaulting them with the bold, digital graphics and signage typical of sports facilities, the arena engages the public with nuanced displays of color and light, visible from the street. Behind the glass face of the new steel structure, an 80-foot-high by 840-foot-long internal wall snakes around the lobby’s expanse, hovering above its floor. Erected in part to veil back-of-house and hospitality spaces, the wall doubles as a backdrop onto which light scenes can be projected. 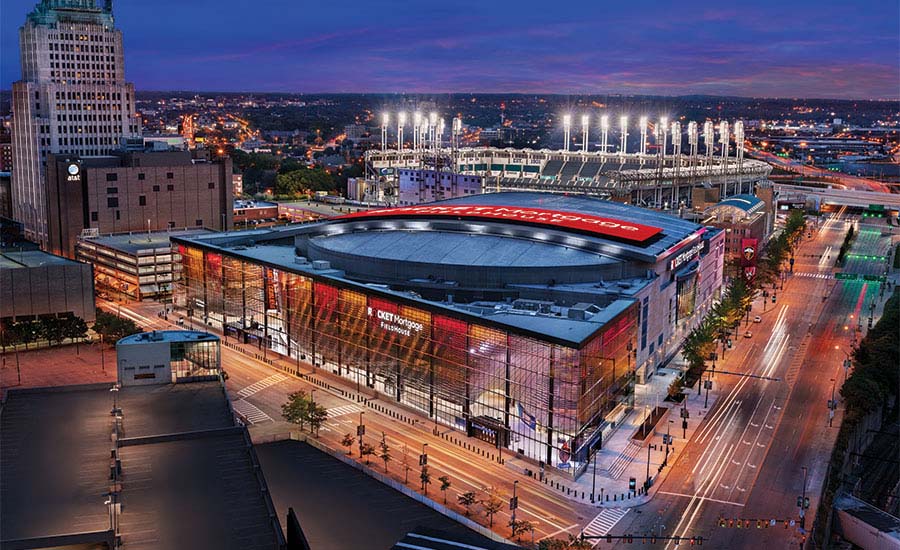 The glazed lobby was added onto the exisiting arena. Image courtesy Cleveland Cavaliers, click to enlarge.

This “curtain,” as it is referred to, was engineered and fabricated by Toronto-based Eventscape to be a porous surface that enables light and views to filter into the building’s interior. To do this, the crew created 4,000 unique aluminum panels, scored on a diagonal and powder-coated in a champagne hue to better catch the light. The panels, which are installed along tall steel edge-frames anchored by the building’s infrastructure, are arranged with gaps of varying widths so that they are dense in some areas and farther apart in others. “The piece is impressive due to its scale and geometry,” says Eventscape executive project director Steve Haniewicz. “But it becomes even more dynamic when light hits it.” 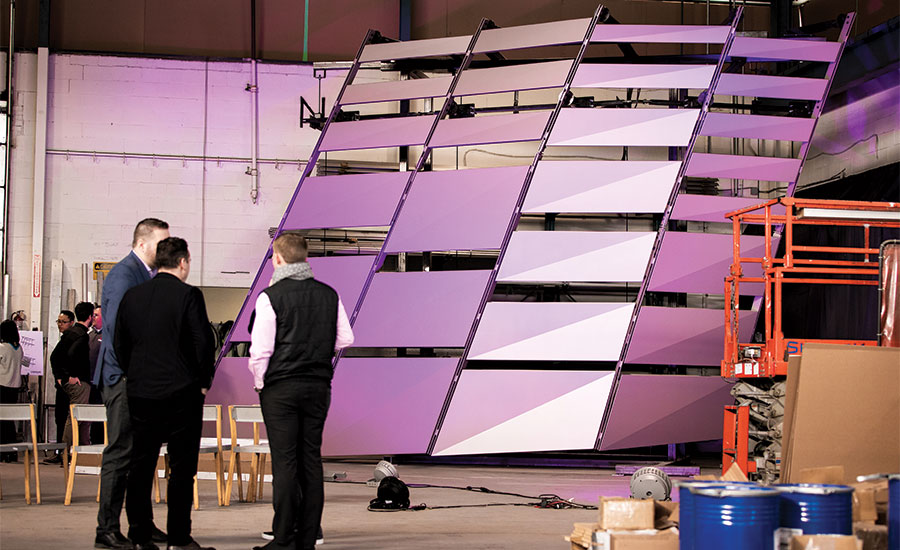 The lighting, designed by New York–based Office for Visual Interaction (OVI), showcases the architecture without dominating it. Employing a straightforward strategy, lighting designer Enrique Peiniger and his team mounted a pair of adjustable floodlights at the top of each of the columns inside the building’s glass front. Then they installed linear wall-washers along the perimeter above the glazing. By washing the curtain with light and articulating some sections so that it is not evenly illuminated, says Peiniger, the wall’s sense of movement is accentuated. Louvers conceal the luminaires and prevent glare, both within the space and onto the street. There are no downlights; the reflective light bouncing off the curtain provides all the illumination. In concert with OVI’s strategy, the architects wrapped the columns in glass-fiber-reinforced gypsum panels finished with a dark metallic paint to help scatter the light. The city of Cleveland, too, had a part in the scheme, replacing existing streetlights with new ones that focus the light down to the sidewalk, away from the building.

The illumination strategy helps as a wayfinding tool, leading patrons into the arena or toward food and drink. It is also an effective means for communicating what’s happening inside. A light scene can be infused with the Cavaliers’ wine-and-gold team colors at game time, for instance. Such scenes ramp up slowly before an event, peak as it is in progress, then taper down to a night mode, when only two recessed areas remain gently lit for visual depth.

“We typically don’t do these kinds of venues,” says Peiniger, whose firm has worked on such high-profile projects as Renzo Piano’s New York Times Building, known for a quiet luminosity. “But we always look at how we can make the project and its architecture relevant to the culture and city it is in.” The lighting, he adds, can communicate a building’s identity.